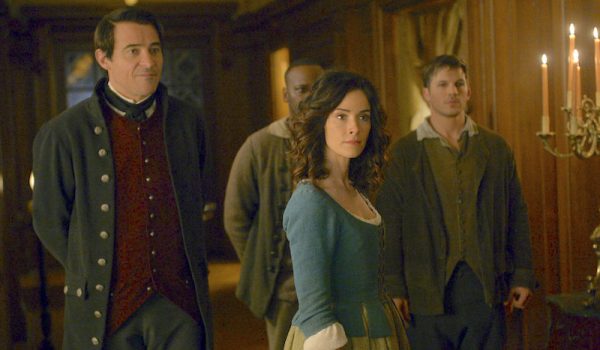 We’ve been covering the TV show Timeless (2016-) since before it came out — which is kind of random, for us, in that this is more mainstream and sci-fi than our usual fare. But, since most episodes spend about 95% of the screen time in historical settings AND since they’re jumping around to different eras each episode, it’s been fun to watch!

It’s been good binge-watching while I’m doing crap around the house, and now there have been TWO (count ’em!) episodes set in my era of expertise, the 18th century! So, of course, I gotta break it down for y’all.

What’s been interesting throughout the show is, as I said in my previous review, the surprising levels of quality for a TV show that has a different historical setting in Every Single Episode. My mind boggles at the idea of having to coordinate, design, and create that, so my hat is off to costume designer Mari-An Ceo and the rest of the designers/creators.

This was the first of the two 18th-century episodes to air and not really my favorite. Mostly because we didn’t get to join the three time travelers (Lucy, professional historian; Wyatt, military special ops guy; Rufus, tech guy who pilots the time machine) in entering the period. Instead, we catch them when they are multiple days on the run, after everything has gone to crap. I love in particular watching Lucy’s awe-filled reactions as she enters different historical periods, because I would be the same way, and I missed seeing that this time. It does, however, give them an excuse for our three leads to look kind of crappy: 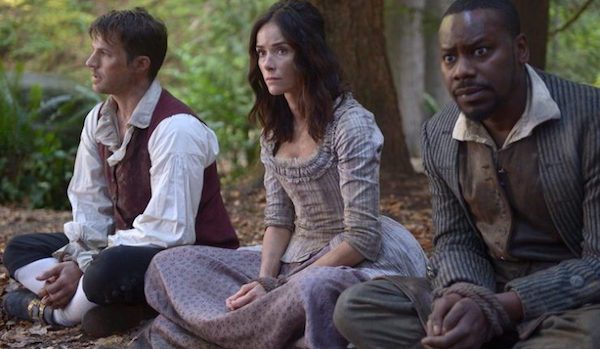 Dirty, no jacket on Wyatt, no hats on the boys, Lucy’s hair down. None of this would fly in 18th-century society, but of course the idea is they’ve been lost in the woods for days.

Looking more specifically at the outfits … I’m not totally convinced by Rufus’s ensemble. As always with his character, they have to make him look racially appropriate, so he can’t be dressed too fancy. I’m not sure if his waistcoat is some kind of glazed fabric or leather, but the long length works for 1750s. However, his coat seems relatively narrow for an era when men’s coats generally were very full-skirted (as in, the portion below the waist): 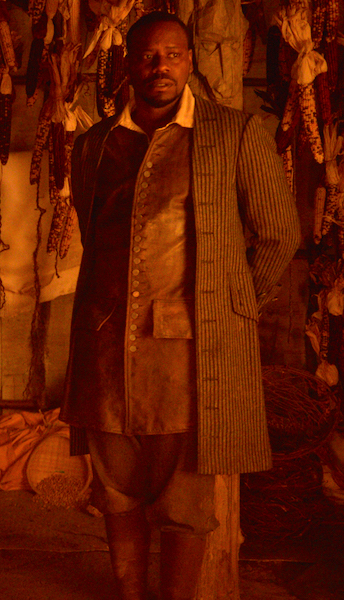 Rufus, too pared down even for someone of a lower station? Note that his waistcoat is of a far less fancy cut than Wyatt’s and also his simple shirt collar.

Wyatt’s outfit is okay-ish … it’s harder to evaluate without the coat. I like that they gave him ruffles on his collar, showing he’s of a higher station than Rufus, and I think his waistcoat is some kind of brocade. I do, however, continue to question his VERY 21st-century boy-band hair — I think any historical person would look at him and think “Who’s the dweeb with the weird haircut?” Okay, so it would be hard to literally change his haircut for every different era, but it doesn’t help him blend in. 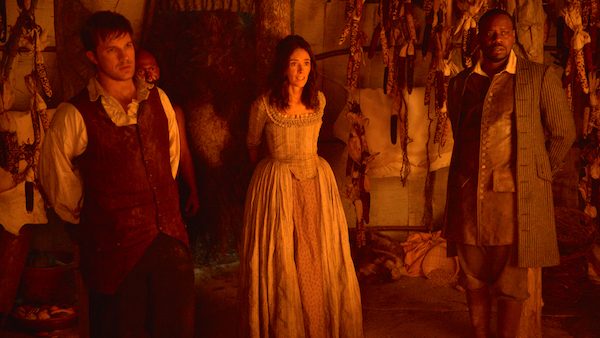 Lucy is a mixed bag. I don’t want to overstate the situation, since again, the filmmakers are doing a different era every episode and most people would never know or care about the nitpicking I’m about to do, so, GRANTED. But with that caveat… 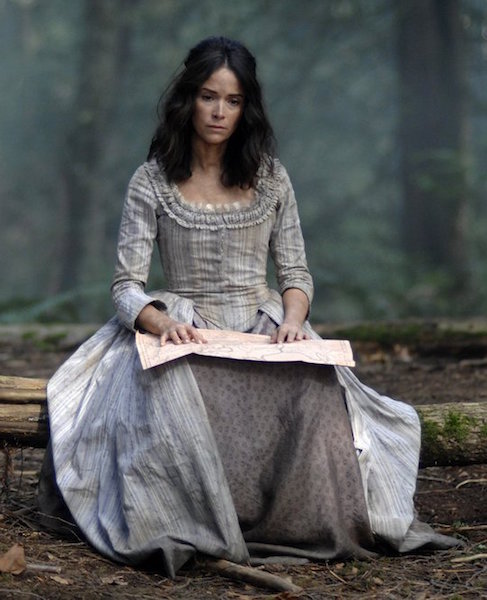 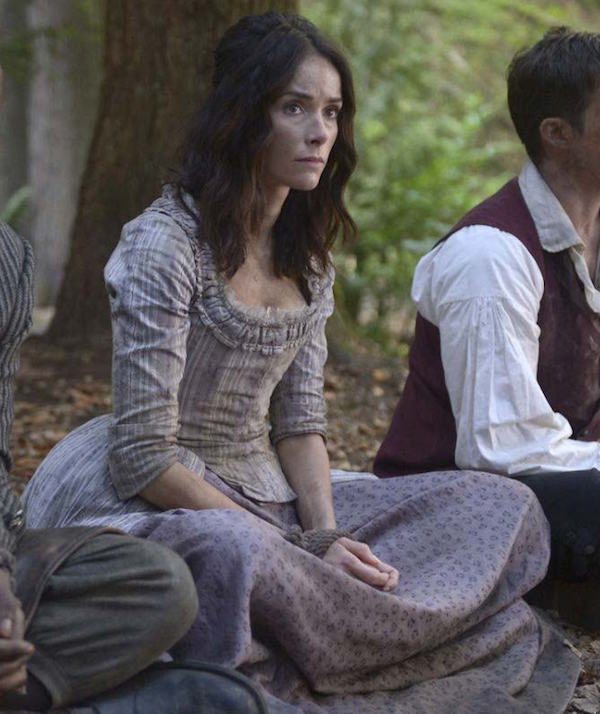 Also that sleeve cap looks very 18th century to me! 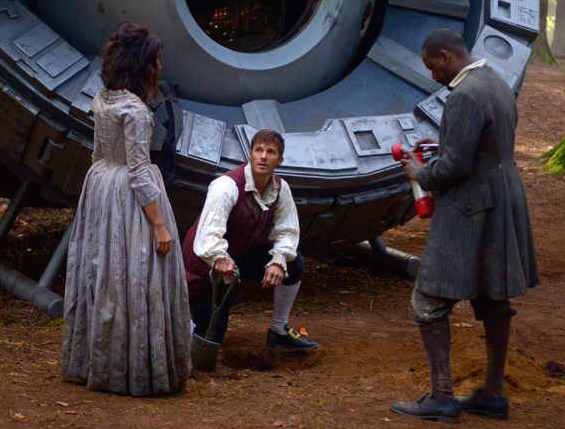 Fitted-back gown — can’t tell if the dress is cut completely separate from the bodice, which would be 30 years too early, but let’s give them a pass. 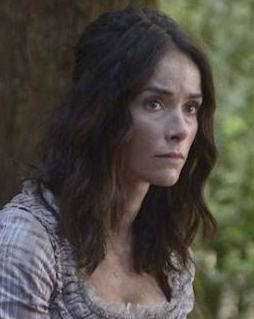 And let me finish with the sage words of Rufus: 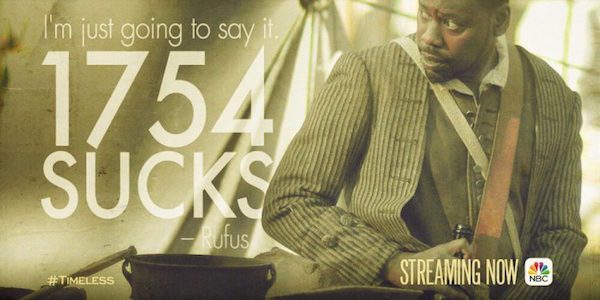 He makes me LOL in every episode! He’s totally Marvin the Paranoid Android of this show.

The Capture of Benedict Arnold: 1780

Skip two episodes ahead, and the Timeless team is in 1780 at the capture of Benedict Arnold. I was happier with this group of costumes, minus the requisite quibbles.

That’s a historian having an orgasm right there!

We start with meeting George Washington and Benedict Arnold. I reached out on Facebook for input from my military reenactor friends, and while there was a lot of salty language about theatrical costumes, no one said anything terribly specific was wrong with the uniforms: 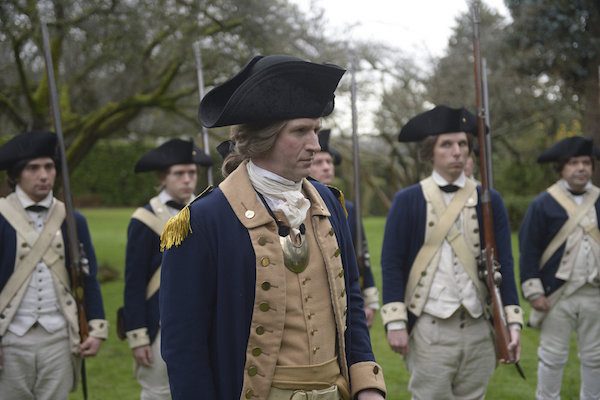 Although note soldier to our right of Benedict (or wait, is this Washington? I got confused looking at images after the fact) is holding his musket backwards. Maybe that’s why he looks so nervous? 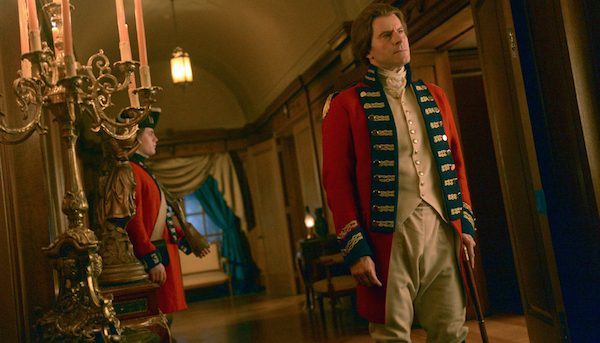 Once he turns traitor, Arnold gets to go redcoat.

We did all agree that the hair/wigs were very questionable. They should have buckles (side rolls), be less feathered, and just less overall teased-and-Aquanetted: 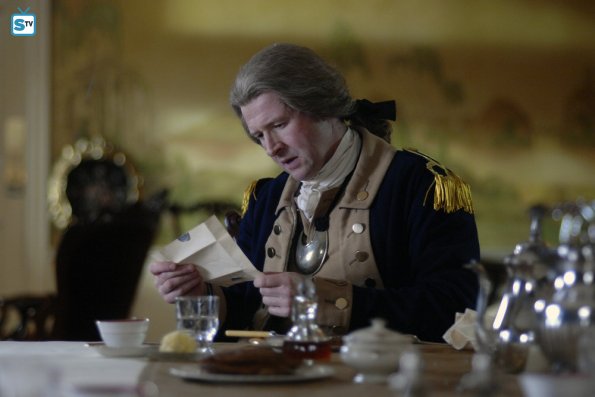 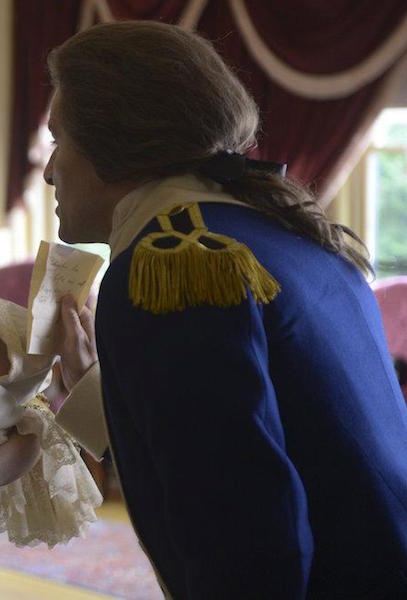 And this is Arnold. Their hair is kind of ’80s, not quite metal-band but certainly boy-rock.

Arnold’s wife looks GREAT, however! Her dress (I think it’s a fitted-back robe à l’anglaise, but I can’t be sure) is perfect for 1780 — stomacher gowns were going out of fashion, but definitely still worn. Here you can see the sleeve ruffles at the elbow that came into style in the 1770s. The fabric choice and trimmings are also spot-on for the era. I do kind of think the skirt could be a theatrical approach in that I don’t think I’m seeing an open overskirt over a petticoat, but instead just one skirt — which would make this dress a “round gown,” but I don’t believe I’ve seen that style with an open, stomacher bodice. 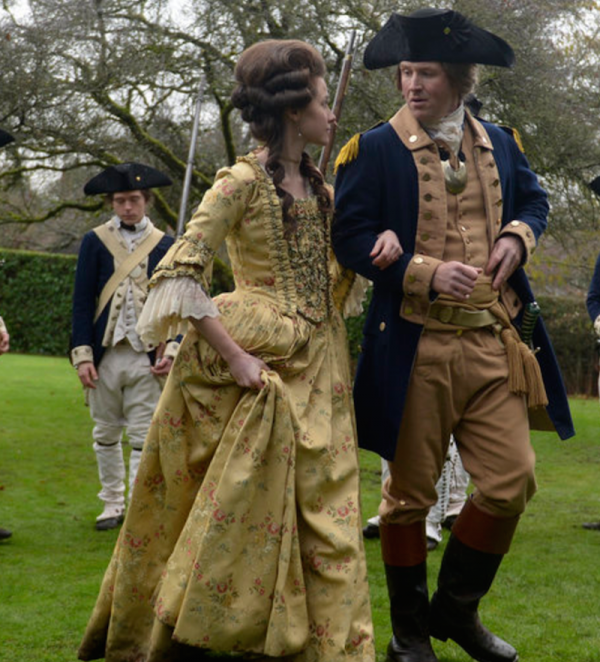 And now, HOLY SHIT HER HAIR! Okay, I don’t want to toot my own horn here, but it looks suspiciously like one of the styles I demonstrate in my own book on the history and how-to of 18th century hair and wig styling, and from what I can see, this is to very much a style worn in this era. Whether they used my book or not, mad props to the hairstyling department! 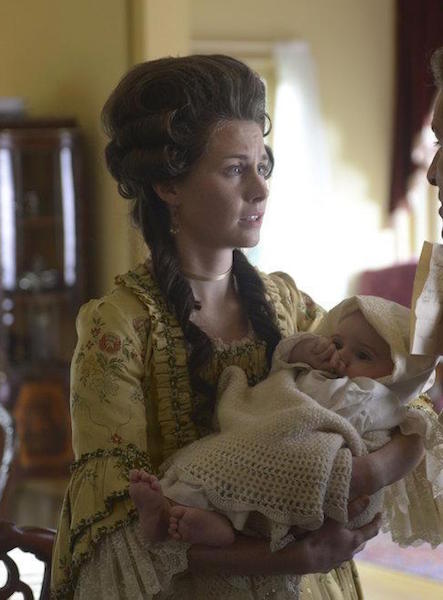 Now to our time-traveling leads. Both Wyatt and Rufus look acceptable for c. 1780 to me, with shorter jackets/waistcoats than in the 1754 episode and both in rougher fabrics. NO HATS, however, which would be verboten in the period. 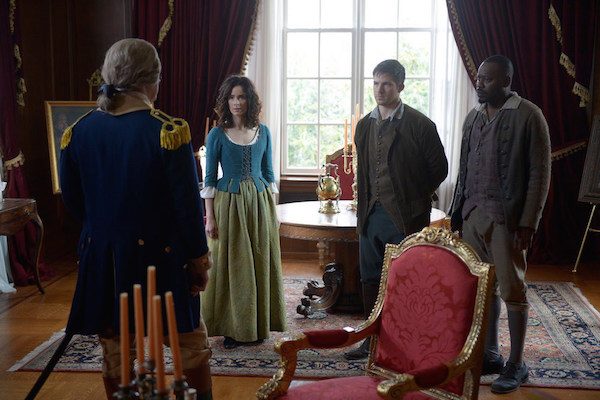 Lucy looks similarly working-class in her green quilted petticoat and nicely fitted blue jacket, with loops for the lacing… 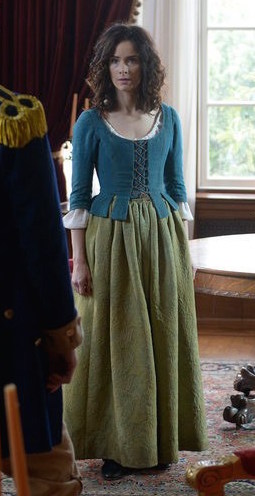 Not grommets or anything else scary — I checked. 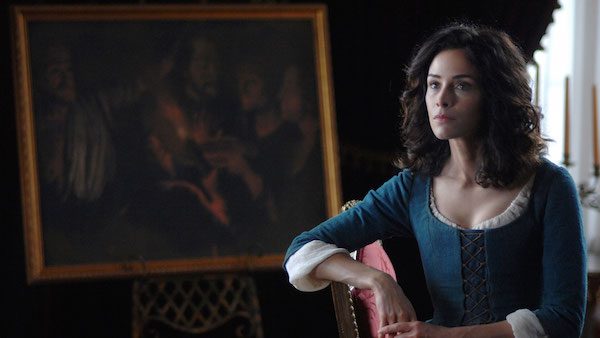 Although that princess-y seam down the side front of the bodice is very much a modern approach to fitting. Hey, at least it’s not bust darts!

But again, HER HAIR. No excuse here, she didn’t lose all her hairpins and her cap in a freak curling-iron incident. Nope, they sent her back in time with Carefully Curled Beachy Waves, which, NO NO NO.

Lucy also gets a cape for running-from-the-Americans purposes: 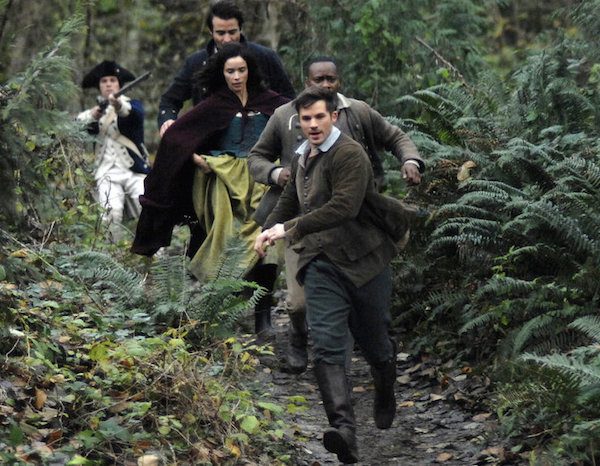 The boys never get hats, tho.

And one last relevant note! At the beginning of the following episode, before heading to 1893 where she gets some very questionable hair, we see Lucy in her stays that she was presumably wearing under the 1780 outfit. I like that they are cut and boned in a very 1770s-80s style! I don’t like, however, the mid-19th-century front-opening corset busk, with metal tabs and loops. Sure, a perfectly reasonable theatrical shortcut, but if anyone had seen Lucy undress in 1780, they would have said “WTF?” 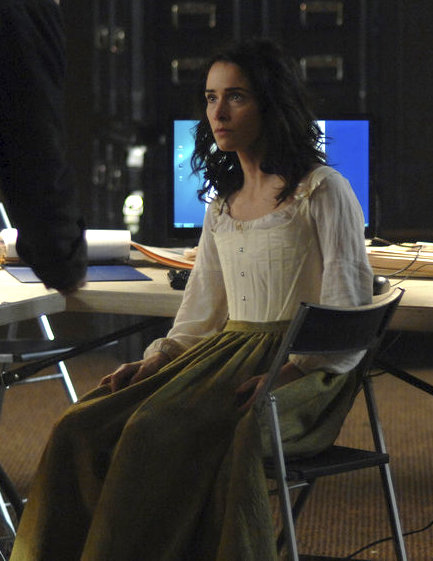 This technology (the silver bits on the front of the corset, which indicates a front-opening corset busk introduced in the mid-19th century) did not exist in the 18th century.

Are you keeping up with Timeless? What’s your thoughts on these costumes?