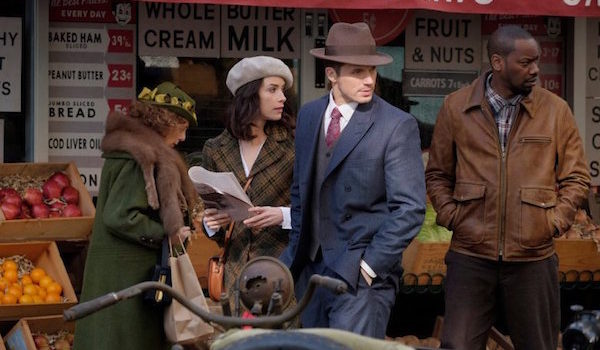 We’ve previously posted about Timeless, the new time-travel, vast-government-conspiracy TV show from NBC — Sarah posted when the preview came out. Now I’ve had a chance to binge-watch a bunch of episodes, and you know what? I’m surprisingly entertained! If you enjoy conspiracy TV series like Lost, Orphan Black, or Fringe, or if you just like the idea of a TV show that is doing a decently serious stab at different time periods, I’d recommend you give it a whirl!

There are a few problems, of course, with the logic — for example, historians tend to focus on particular eras/topics, so I’m confused how Lucy is an expert in every subsection of American history. And while Rufus’s commentary — particularly on being a black man going back in time — is pretty funny, he’s also very obviously there for the wry comic relief.

But who cares, because they’re actually trying to do a decent, non-cheesy job at presenting the history! Each episode begins with a scene showing how the key event went down in “real” history, then we see it play out again with the terrorists and our heroes mucking things up. I particularly like how they’re not actually keeping the history as-is — while, so far, our heroes have mostly saved the day, when they get back, they find that the history has been rewritten to accommodate the subtle changes that have occurred.

I’m also entertained by some of the costume-related bits, like the giant warehouse of period costumes the government puts together; Lucy complaining that the fabric of her blouse didn’t exist yet and that her skirt is from the following decade; watching Lucy get dressed in 1860s gear, including a cage crinoline; and Wyatt mocking the Civil War reenactors from whom uniforms were borrowed. 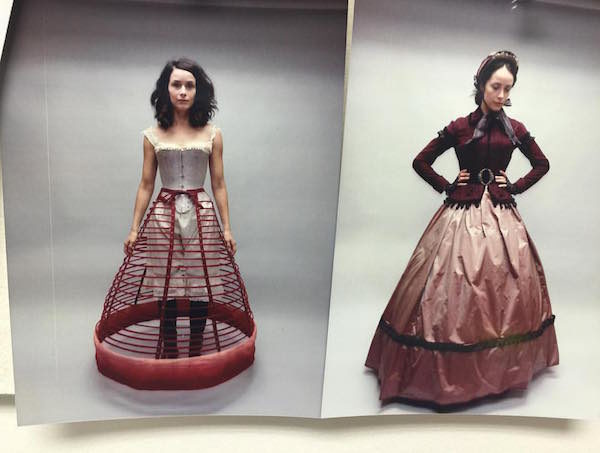 Check it out — not only are these underpinnings historically accurate, you get to see Lucy be dressed in them on screen!

The costumes were designed by Mari-An Ceo (although Wendy Partridge also gets credited for one episode on IMDB), and while not everything is 100% perfect, I have been very pleased with how much they are trying to make things look seriously accurate. This is no small issue on a TV budget, when each episode calls for an entirely new wardrobe: “You’re talking about corsets and hoopskirts, suspenders and ascots, and it’s just very elaborate. It’s a tall order to ask a crew to be an expert in every time period, to know what jewelry to pick, how to tie a corset and what kind of corset goes with what outfit” (Time-traveling series Timeless a tough task for costume designer). 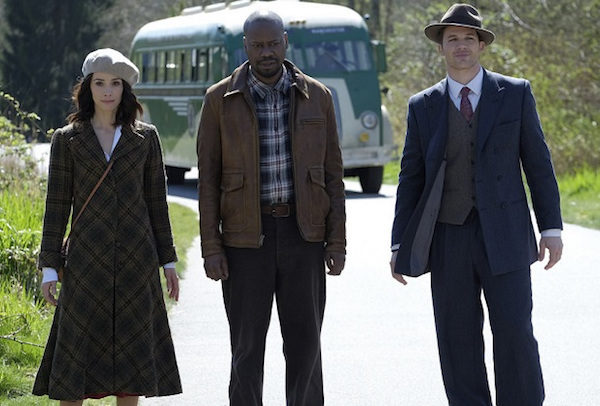 In the first episode, the terrorists go back to the Hindenburg explosion — so 1937. 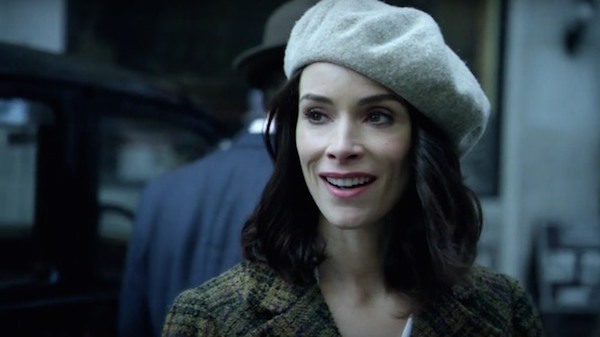 I’m glad they put a hat on Lucy’s VERY modern beachy waves. Also, they were very smart to cast a dark-haired actress because then she doesn’t look super “makeup-y” in the pre-20th century episodes. 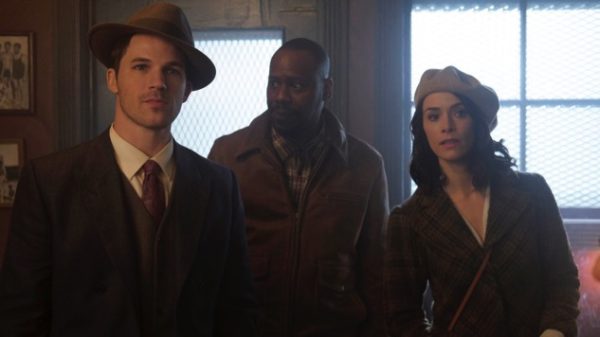 I was, however, rolling my eyes when Lucy’s big save was to follow Wyatt’s confusing-to-the-period “Hey how’s it going” with “How do you do.” OMG ROCKET SCIENCE SO GLAD WE HAD A PROFESSIONAL THERE FOR THAT ONE. 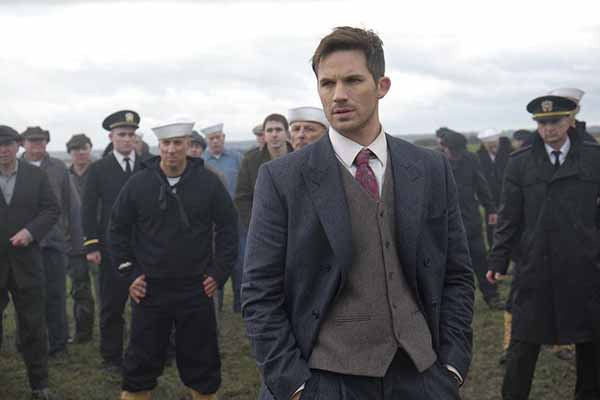 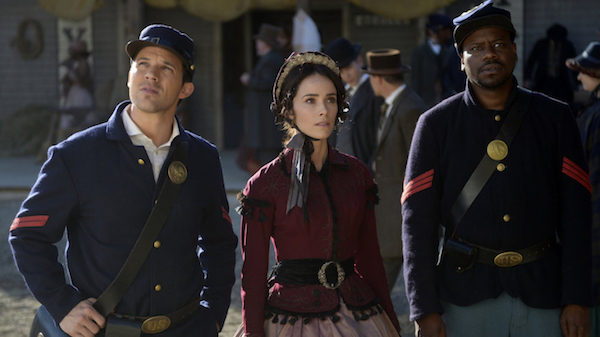 In the next episode, we’re off to the assassination of President Lincoln. As Sarah raved, they put Lucy’s hair up, although her too-fitted-for-the-period sleeve annoys me… and yes, they loved fringe and tassels, but that it SO obviously from the upholstery section at JoAnn’s. 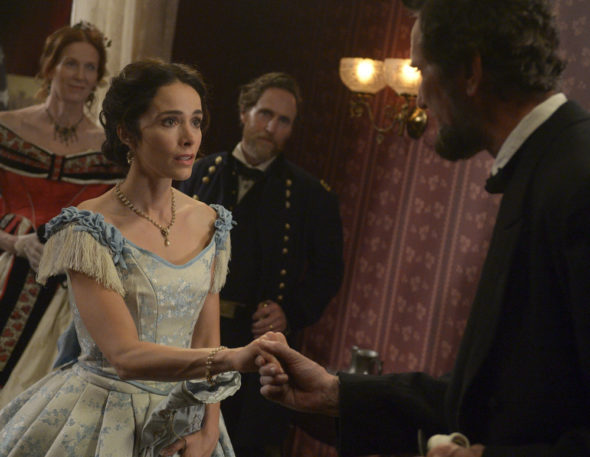 Not bad! Might want to add some hooks & bars to attach the bodice to the waistline, but hey, HER HAIR IS UP!

And, some of the more egregious costumes — Rufus’s weird jacket, Lucy’s clonky brown and white dress — that Sarah rightly pointed out as being suspect don’t actually make it to screen! So that was a relief. 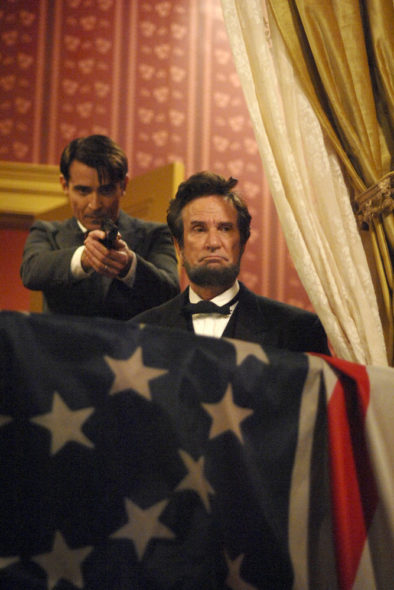 The show is being weirdly reverential about NOT showing famous people — except for Abraham Lincoln. I guess he’s considered far enough back that modern people don’t have a fixed idea of what he looks like? 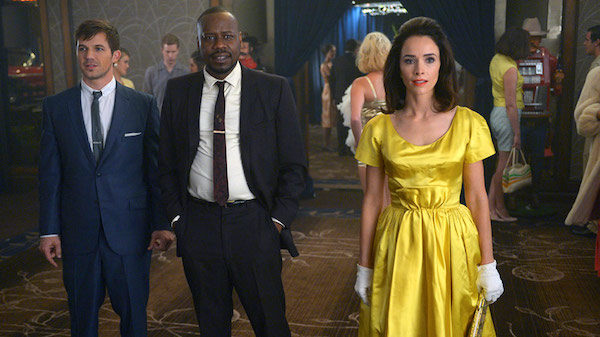 Episode 3 sees them in 1960s Las Vegas. Skinny ties for the boys and gloves for Lucy! Rufus’s comment about being invisible in this era was hilarious. 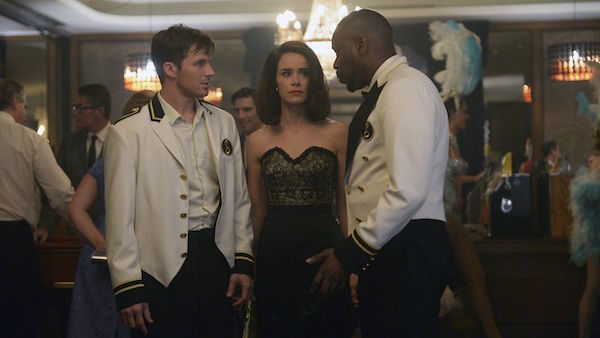 I liked the UBER boned bustier Lucy got into. 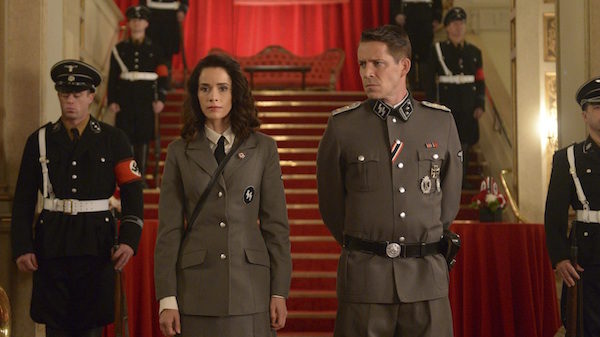 Of course they’ve got to do Nazis, but it was cute having them meet Ian Fleming and get all fangirl/boy-y. 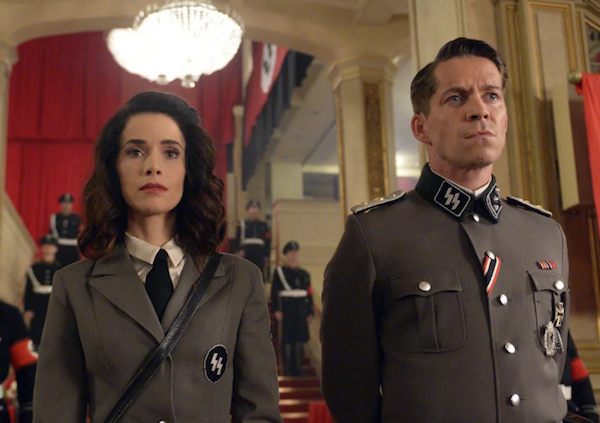 I very much question Lucy’s beachy waves, however. 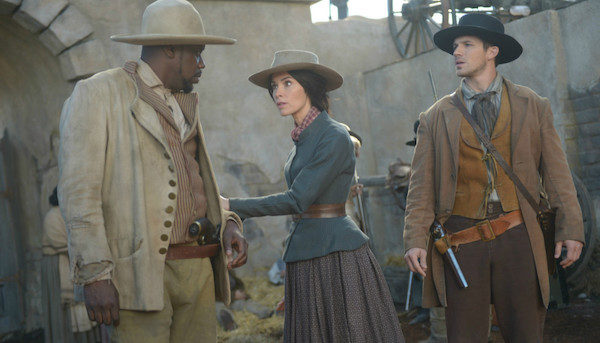 The Alamo, in which Lucy’s ensemble is suspiciously pared down and not very 1830s — although female extras DID look good for the era. 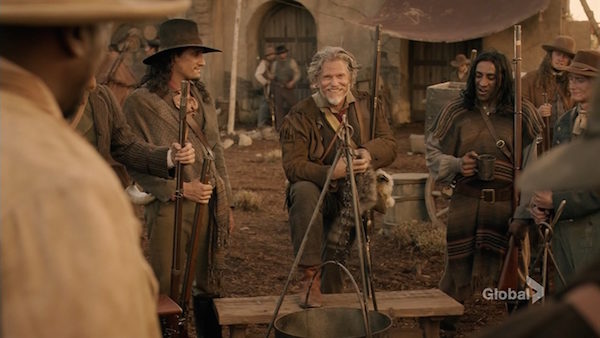 Once again, it was fun to see famous figures like James Bowie — and then the “reality” behind the story. 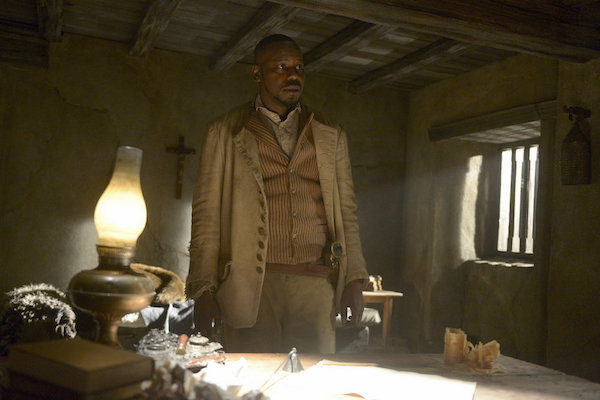 That’s how far I’ve gotten — in two more episodes, yassss, we hit the 18th century! Although it’s the 1750s (French and Indian War), so I question Lucy’s very 1780s robe à l’anglaise. I’ll be back to praise/snark no doubt. 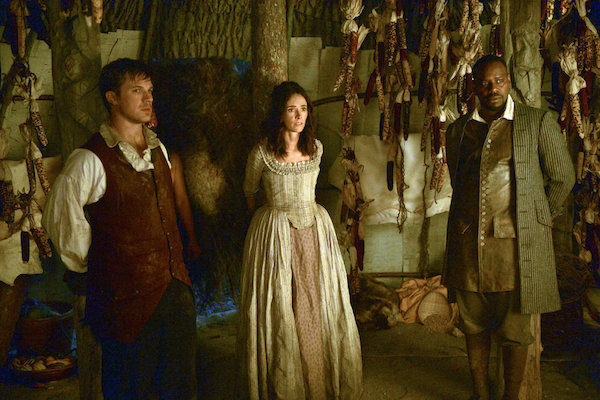 Please tell me Lucy begins with better hair than this. 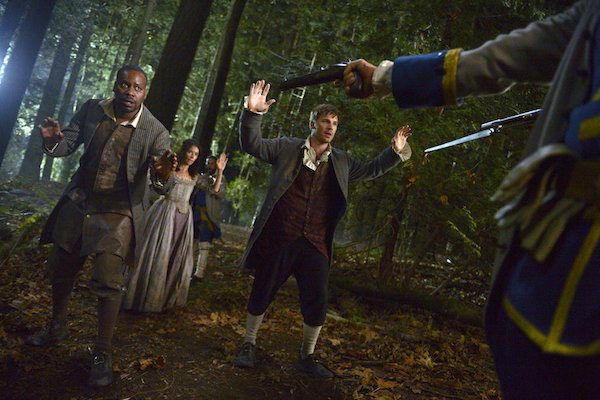 And that the boys start off with hats.

Have you checked out Timeless yet? What’s your verdict?