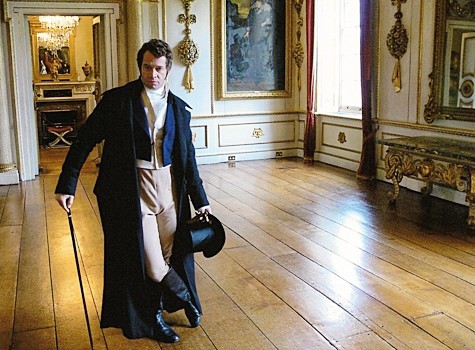 On this day in 1778, Beau Brummell was born, so it seemed like a good time for a deeper dive into This Charming Man: Beau Brummell (2008) starring hottie James Purefoy. It’s currently streaming on Acorn TV, plus I was intrigued that the title is an obvious reference to one of my very favorite songs by the Smiths, “This Charming Man.” While I agree with Kendra’s mini-review that the plot is a little meandering, I found This Charming Man gave a solid biography of Brummell, a figure who has been little but a caricature over the years and parodied as the epitome of shallow male vanity. Which he may well have been, but at least this TV movie gives him his place in history, showing his quick rise to fame and equally fast fall, by focusing on his years in London around court.

What I enjoyed most — OK, aside from watching James Purefoy go from naked to sharp-dressed about 100 times — was how much was packed into this film. Even though the plot covers only a short time period in Brummell’s life, the film shows how he crafted his persona out of nothing but a few elements of dress and an overwhelming sense of self. He created an entirely new way for British upper-class men to dress and behave, building a cult of personality that was briefly more powerful than the crown royal. Beau Brummell’s celebrity has obvious echoes today in our reality-TV dominated world, where people like the Kardashians are literally famous for being famous.  Brummell didn’t design clothing or put outfits together in a special way, he made it popular and did it with attitude and did so with the right person, that is, the Prince Regent of England. This Charming Man plays the relationship of Beau Brummell and the Prince like both a parent / child relationship and like a pair of lovers. Brummell begins by instructing and guiding the Prince, soothing his fears and calming his troubles, literally reading him bedtime stories. But when other people crowd the admiration society, and especially when Lord Byron sparks Brummell’s fascination, the relationship turns fraught. Jealousy erupts like a lover’s spat, and the Prince squabbles over trinkets. This plays with the long-standing tension in dandyism between manliness and effeminacy, which is reinforced by the very film title.  The Smiths’ song “This Charming Man” is an oblique story of a gay pickup, framed in the archaic language that songwriter Morrissey loves so much, and it fits like hand in glove (to quote another Smiths song) with this biopic to reinforce a touch of homoerotic mystery, for thems in the know.

Purists should note that there’s no modern pop inserted into this TV movie. In fact, you’ll find more Henry IV and The School for Scandal woven elegantly and ironically through the script than anything of our century. Are you a Beau Brummell fan?