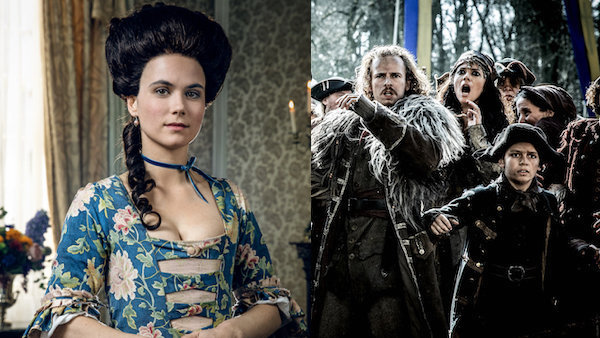 Last Snark Week, Trystan did a round-up of variously potentially bad subtitled frock flicks, and suggested I watch Thieves of the Wood (2018), a 10-episode Belgian TV series set in 1747. I had forgotten about it until another friend mentioned it, and since I was running low on interesting things to watch, I decided to fire it up on Netflix — hesitantly. Well, color me shocked to discover I was entertained and happily sailed through all 10 episodes! In typical Kendra overachiever fashion, I collected a million images and have a bunch of things I want to talk about, so to give myself a break I’m going to split this into two posts. Today I’ll introduce things and talk about the men’s costumes, as well as the mostly lower-class women; on Thursday we’ll be back to discuss the middling/upper class women.

Why is the show good? I’m not entirely sure if I can put my finger on it! I think I liked that it was gritty but still had some shine, the story felt fresh, the characters were interestingly complex, and Flemish is entertaining to listen to. (Also, side note, nearly everyone in this production looks like a member of my family, which is weird, as an ethnically mixed American mutt who nonetheless has strong German/Dutch/Danish heritage).

The story is based VERY LOOSELY on real-life Flemish outlaw Jan de Lichte, who during the War of the Austrian Succession (1740-48) led a criminal band. In the TV show, he’s recently returned from the war under suspicious circumstances to a town with a very corrupt leadership that is invested in arresting people and making them outlaws. The outlaws end up creating a camp in the woods, and you guessed it, getting organized.

Although Jan is pretty one-note, a lot of the supporting characters were believably complex. I particularly liked bailiff Baru, newly arrived and very principled, but he has his weaknesses, and Anne-Marie, orphan runaway who falls in with the outlaws.

Two side notes before I get into the costumes:

The locations were really great. Not only did they clearly have access to real historical buildings, but the production designers built some really interesting structures for the outlaws to live and hang out in. If you’re in the mood for some good spooky atmosphere as Halloween approaches, look no further:

I think this is supposed to be the mayor’s house; it’s a museum in real life. 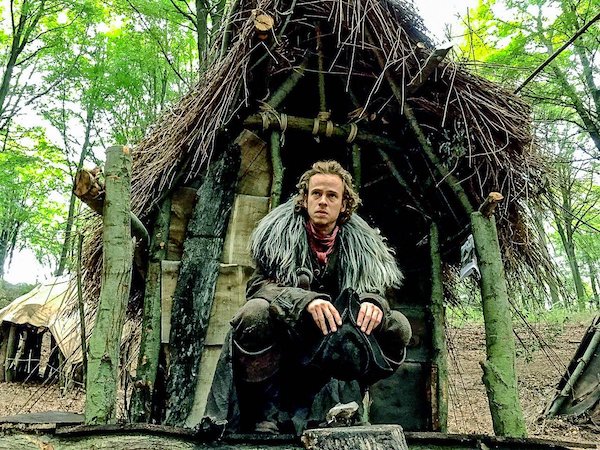 One of the outlaw houses.

There is yet another Shitty Historical Portrait: 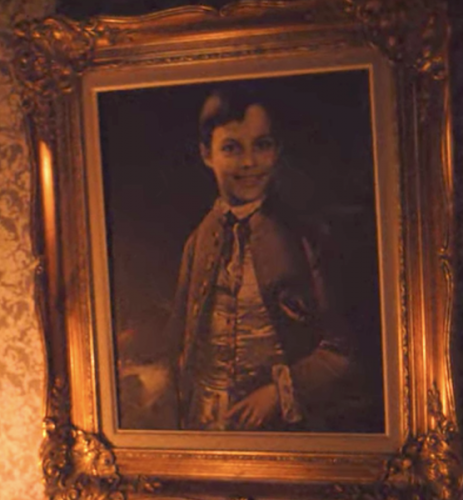 Now, on to the important stuff!

Costumes in Thieves of the Wood

The costumes were designed by Raïssa Hans, who has only designed a few productions that I haven’t heard of, but who has worked as set costumer, costume supervisor, and assistant costume designer on The White Queen, Indian Summers (season 1), Close to the Enemy, Les Misérables, and World on Fire — and on the forthcoming season 2 of The Spanish Princess. Sadly, I can’t find any press with her about this production, even in languages I would have to Google translate, so I’m just going to have to talk about what we see on film.

Okay, so I never have AS MUCH to say about the boys, but see again re: ten thousand images.

Our main guy is Jan (Matteo Simoni, left); his co-captain is Tincke (Stef Aerts, right). Most of the outlaws spend their time in multi-layered, dirty, worn clothing that reasonably suits the period — even when Tincke is up on his luck for a while, running a higher-priced brothel, which confused me (do you really want your brothel-manager to be filthy?). 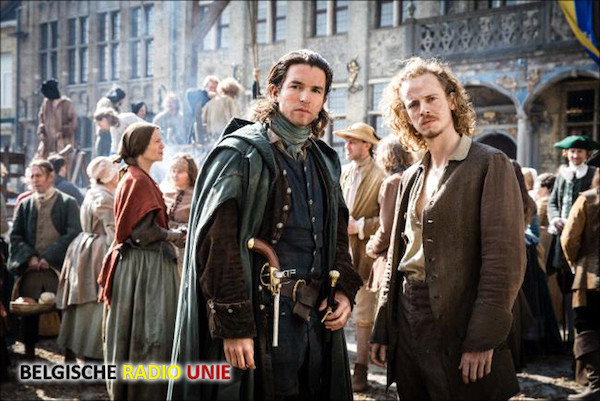 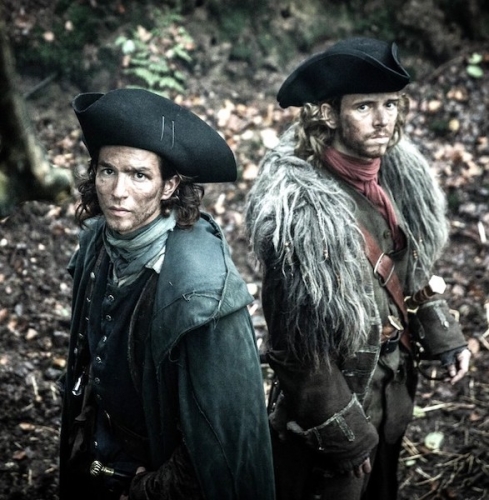 Tincke does get this fur collar on his overcoat, which seemed awfully Game of Thrones-y.

The main character is Baru, the bailiff who’s newly arrived and determined to whip things into shape. He spends most of his time in military uniform: 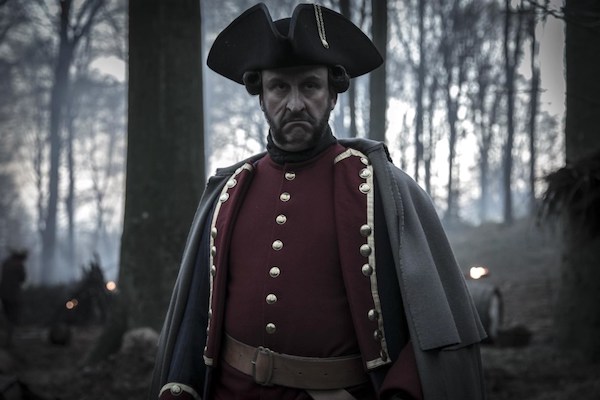 Good enough for me?

Wigs play a pivotal role in this show in a way I really liked. Baru gets one at one point, and while I liked how artificially “wiggy” it was, I wasn’t a huge fan of the curled bangs: 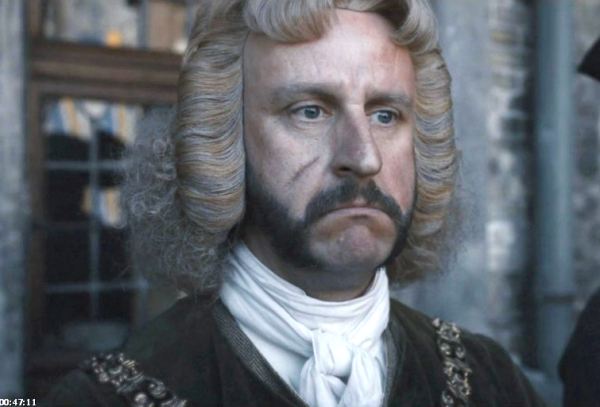 That color variation doesn’t show up on screen; I always like to lighten my screencaps so we can actually see what the hell is going on (this is a particularly dark and murky production).

There’s a bunch of other power players in town, including the mayor (who has a HIDEOUS attempt at a full-bottomed wig), a businessman and his son who both get REDONKULOUS wigs, and a priest: 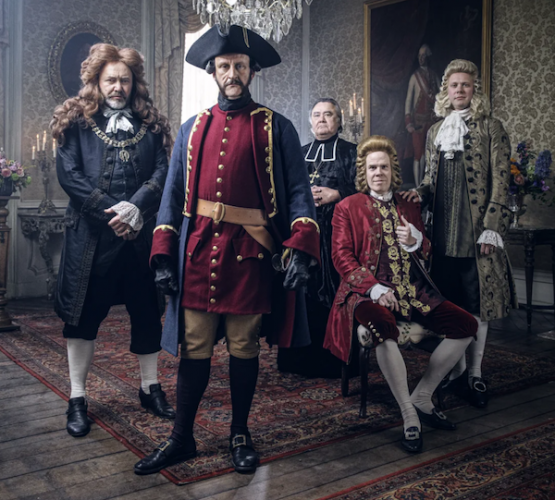 I like that Nicolaï (far right), a businessman’s son, has the longer coats and waistcoats of the mid-century. He and his dad (in burgundy) have hilarious wigs, which actually work for the characters because it’s meant to show how artificial they are. The mayor (far left), on the other hand, looks like he’s auditioning for The Lion King. 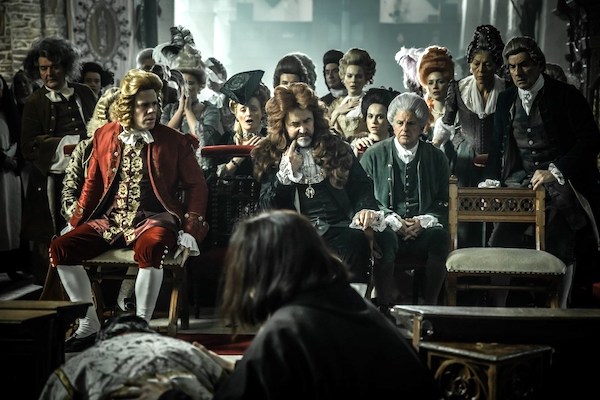 Let’s look a bit more at Nicolaï and pops: 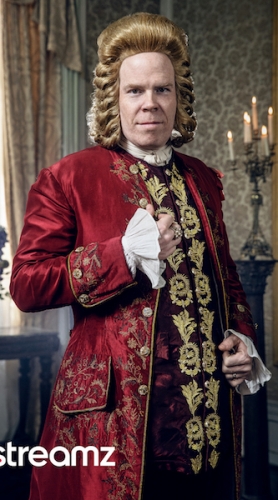 Ok, so that’s very obviously machine embroidery on the coat, and applique on the waistcoat, but it works theatrically. 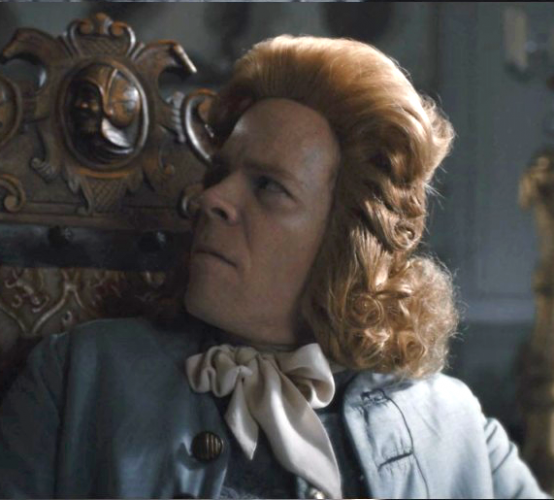 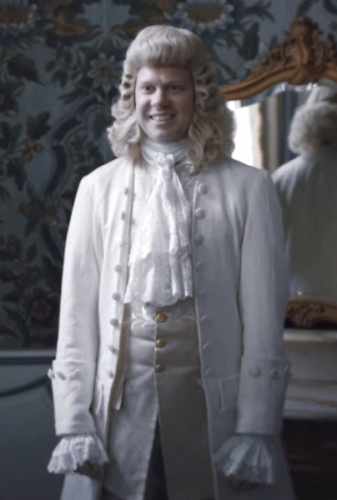 Son Nicolaï — a key character is forced-ish to marry him. This is his wedding suit. Shades of Mr. Collins, eh? 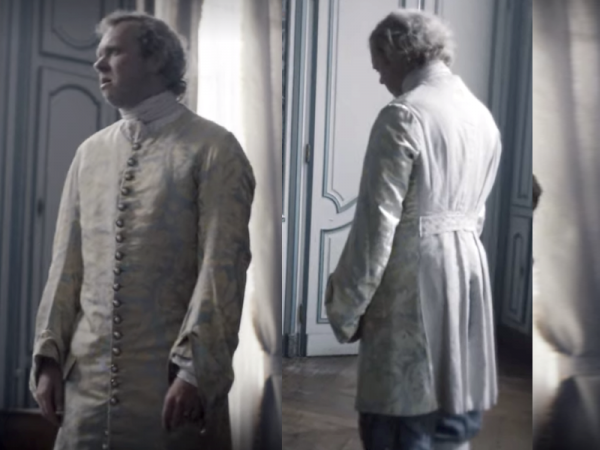 I particularly liked that they gave Nicolaï sleeved waistcoats, as you see these a lot in museum collections and they make sense for cold weather/unheated rooms. 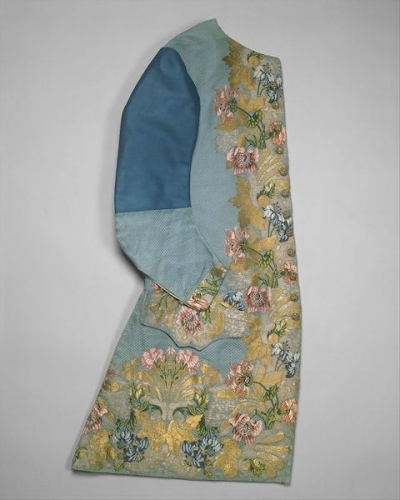 Here’s one of those sleeved waistcoats; the upper sleeve and back are made in plain fabric, because they will be covered by the coat | Waistcoat, 1747, Metropolitan Museum of Art.

Again, I need to give props to the wig stylists, who managed to make a number of different styles that all did their job: made the wearers look like pompous idiots. Dian Vandecruys is credited as “makeup artist / wigs,” while Leendert Van Nimwegen was key hairstylist, Marike Willard was a hair stylist, and Natascha Matheuwezen was assistant hairstylist. 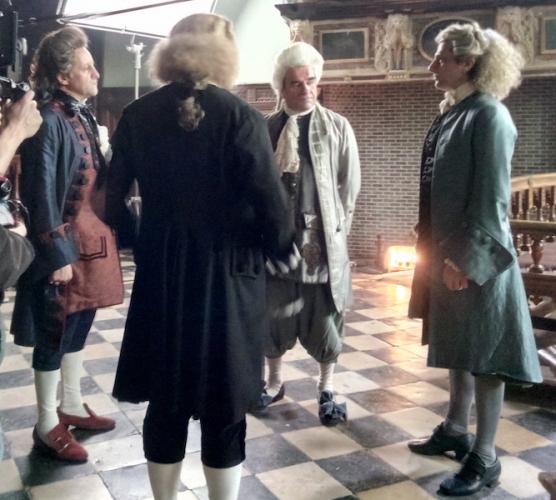 Most of the lower-class female characters were prostitutes (there were definitely women living in the outlaw camp, but they’re all background). But before we get to them, I want to just point out the great job they did on “De Schoen” (Shoe, don’t ask me!) and the silent young girl who’s name I never caught — except for the hair. 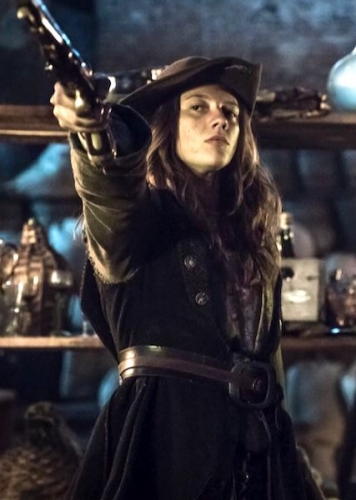 Shoe mostly dresses like a boy, although then why she’d wear her hair down is beyond me. 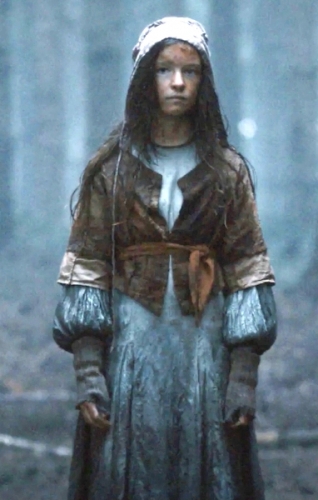 Props for the layers, distressing, cap, and accessorizing!

I really liked how they costumed the prostitutes. They’re mostly working at a rural brothel out in the woods, and nobody is inappropriately shiny.

One of the key characters is Anne-Marie. She’s a runaway who gets taken in and trained up by the prostitutes. We’ll see a lot more of her on Thursday when I talk about town women, because she definitely moves up the ladder. 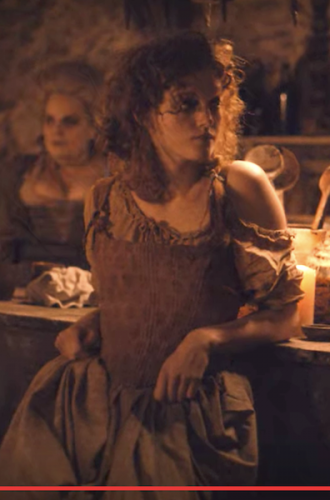 The prostitutes’ look is generally shift, stays, and petticoat, with big messy hair and a lot of eye makeup. 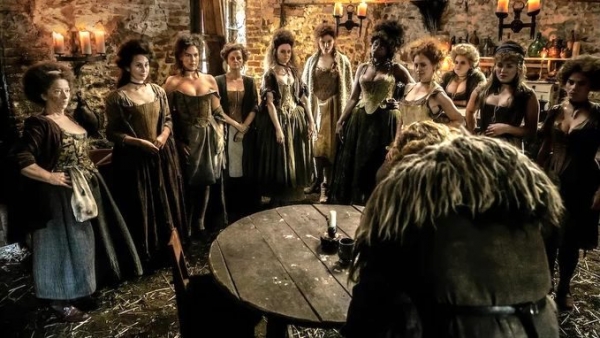 I liked the range of individual outfits. Note the hanging pocket on the far left, and the great cut of the stays on the center-right-ish woman. 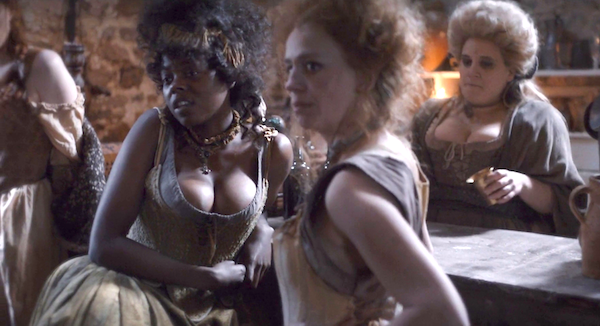 Those really nicely shaped stays are worn by a woman of African descent. I liked that they had some diverse casting, and the fact that they address this in the storyline. People of color existed in Europe! 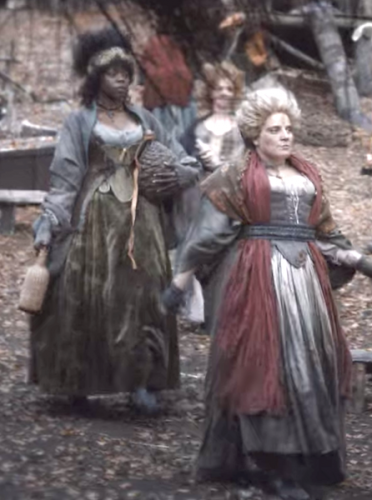 There was a lot of great distressing and weathering on the costumes. I like how flattering the shawl with sash is on the curvy woman on the right. All of these look like real, lived-in clothes. 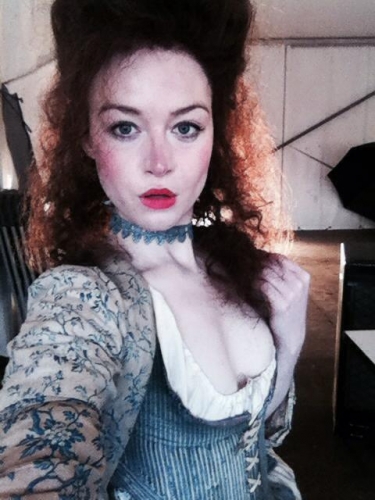 This is a behind-the-scenes shot of an extra. The show is very dark and murky, nothing is this clear on screen, so don’t freak out about the makeup.

In one scene, some of the prostitutes working at a town brothel practice a striptease dance. Once again, I liked the stays and petticoat combos (and I will just hope that they have sleeveless chemises on underneath to avoid corset chafing), and in particular I liked that as one of them disrobes, another picks up her bumroll that she’s been wearing underneath: 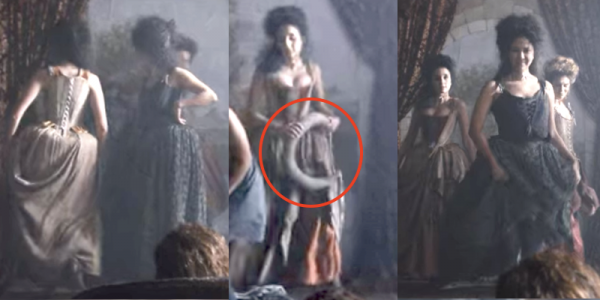 This was the best I could do, screencap-wise — and even these I had to lighten digitally!

Come back Thursday, and we’ll get to the shiny, upper-class women from Thieves of the Wood!