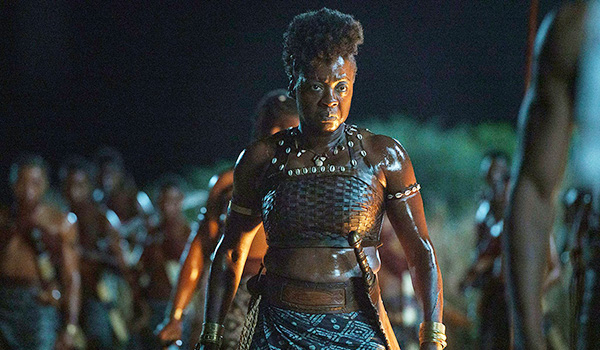 I caught an early show of The Woman King (2022), which opens in theaters this weekend, and OMG I am so incredibly impressed! This movie got rave reviews from its premiere at the Toronto International Film Festival, and no wonder. This is a beautiful, powerful, exciting film. It combines a sweeping historical epic with an intimate view of female bonding, trauma, and resilience without being cliche yet feeling universal.

The story is set in 1832 in the West African Kingdom of Dahomey, where General Nanisca (Viola Davis) runs the all-female warriors called the Agojie. Their new ruler, King Ghezo (John Boyega) is struggling against the Oyo Empire, which is aligned with white European slave-traders. Nanisca warns her king to stop his part in the slave trade and instead trade with palm oil the Dahomey can harvest and manufacture.

Other than Ghezo, all the characters are fictional, but the basic outline of the story is historical. You can nitpick the details over at History vs. Hollywood. Director Gina Prince-Bythewood has said her influences were historical movies like The Last of the Mohicans, Braveheart, and Gladiator, and similarly to those, The Woman King plays a little fast and loose with the accuracy of the story in service to the drama. I don’t say that as a bad thing because it really works, and I do think sometimes we (yes, I’m including Frock Flicks in this) can be too much sticklers for the historical accuracy when there’s just a damn fine story being told. 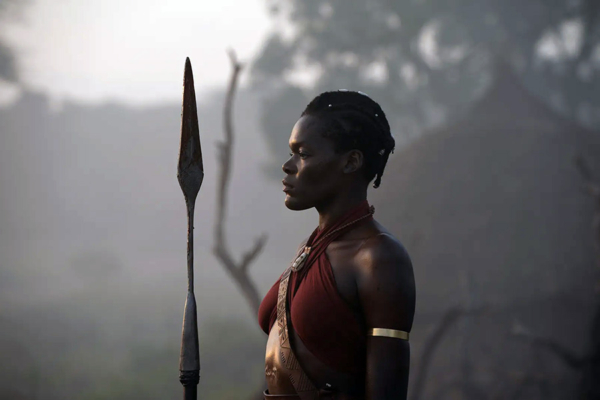 Just getting this film made was a monumental feat, given Hollywood’s disinclination towards risk. But also researching this little-known and glossed-over part of history was a challenge. In particular, the director wanted to recreate the world from the Dahomey point of view instead of a white revisionist one: Gina Prince-Bythewood told Vanity Fair:

“Our production designer, Akin McKenzie, started combing through and excising anything from the colonizer’s point of view. He knew which photos were fake and created for the World Fair. There are so few actual photos of these women. Most of them are recreated.”

She continued this theme in Forbes, saying:

“We did the deepest dive into the research, finding which sources were accurate about this time and place, the kingdom, and the women. Some were very offensive in the way they were written because of the lens they were looking through. That said, we found these incredible journals written by these two men who went to the kingdom and their descriptions of the palace, the costume, the people, and the environment, and that’s what I wanted to put up on the screen.”

And, of course, they were filming during COVID lockdowns in South Africa, so scenes that would have had 300 actors were limited to half that number at times. Actors and stunt performers were quarantined in their hotels before filming face-to-face. 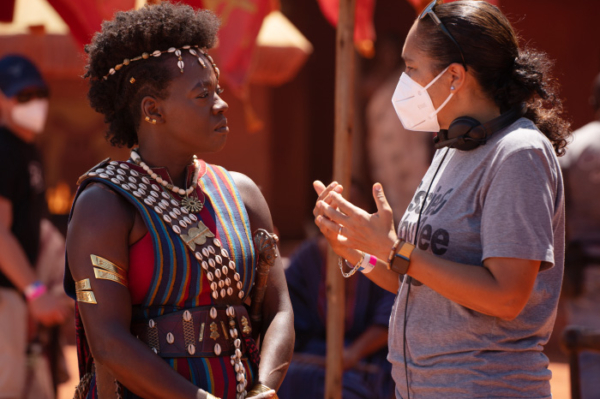 One problem with reviewing a movie that’s in theaters right now is that I don’t have screencaps, just these few promo stills that have been released. So you can’t see the breadth and variety of the gorgeous costuming in The Woman King!

Costume designer Gersha Philips started the designs for the Agojie warriors based on the baggy pants they historically wore, then she incorporated wrap skirts, a style also found in her research. Both because a warrior’s costume has to move with the body, and film-making is very fast-paced and rough on materials, some concessions were made. She explained in Variety: “I had to consider functionality. Everybody had to fight, so we ended up using a stretch-knit fabric so they could do what they needed to do in it.” 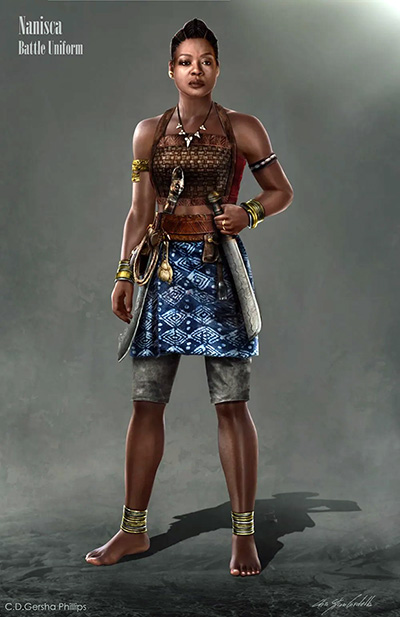 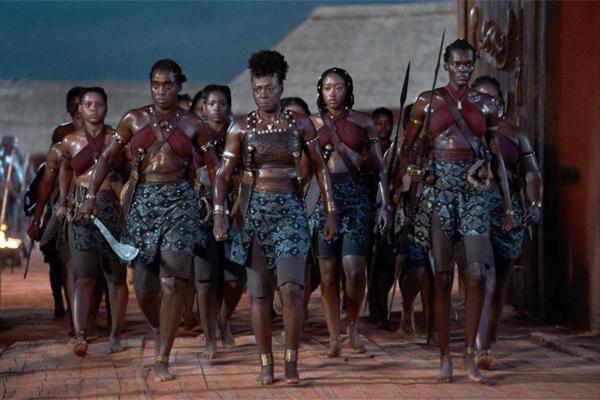 Decorations like cowry shells had historical, cultural meanings. Philips told Variety: “When the warriors won battles, the king would give them as gifts, or he would give the shells as jewelry.” Thus, Nanisca (Viola Davis) wears a sash and headpiece with cowry shells, and other warriors have cowry shells woven into their head jewelry, armbands, belts, or pouches.

Authentic fabrics were key to many costumes as well. Gersha Philips commissioned a Gambian artist to create indigo block prints on batik cotton. She also had Ghanan weavers from the Bolgatanga area create strip-woven material: “We had our fabric woven in 10-centimeter pieces, and it’s all joined together to make what became the Agojie palace tunics.” 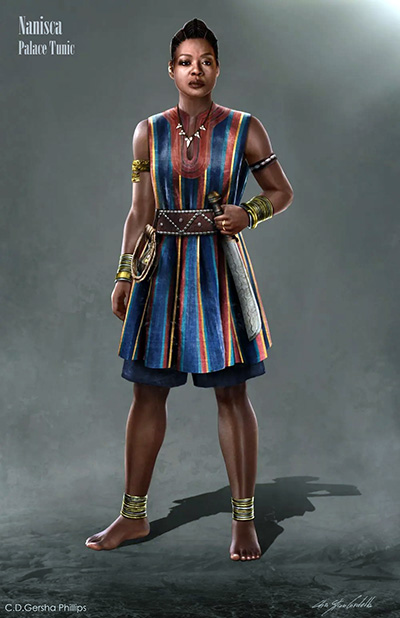 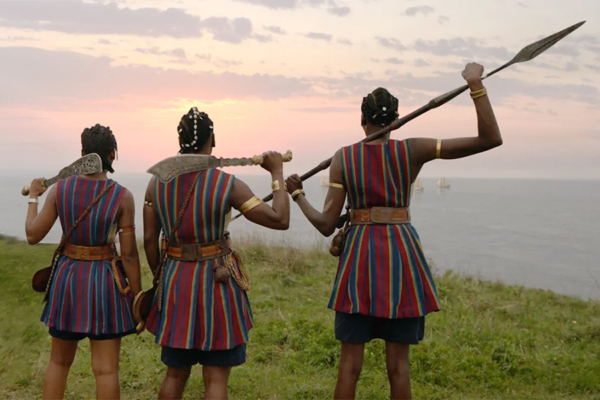 While there are battle uniforms and palace guard outfits, there’s also gorgeous flowing robes that the king wears (of which this is the only pic I can find so far). 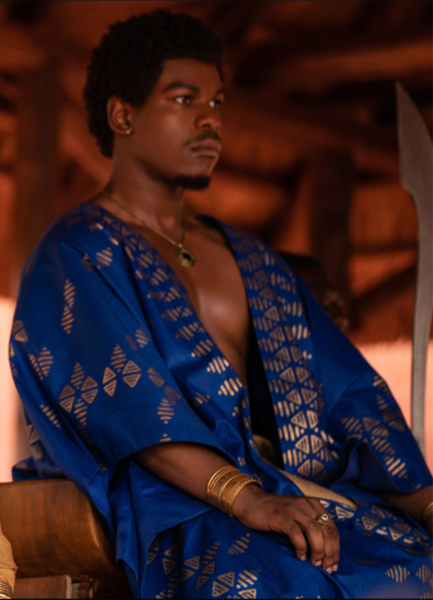 His wives wear elaborate outfits with cowry shell headdresses and beautifully styled hair, plus colorful makeup. Even the palace eunuchs have brilliant purple robes. And there are fantastic scenes when the Agojie wear colorful “civilian” clothes for dancing and just enjoying each other.

That’s one thing that was a pleasant surprise about this movie. I went in thinking it would be a lot of big battles — and yes, it does open with a battle and there’s a couple more at key junctures. But there’s also a lot of music and dancing! It’s a really joyful film, female joy, Black joy, African joy, and it’s infectious joy. So much of this movie is about women, just women, not women looking for love and romance, but women trying to be the best of themselves that they can be. That is an incredibly joyous thing in the end.

Are you going to see The Woman King? What’s stopping you?