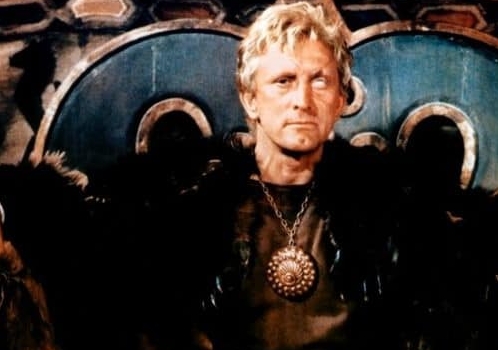 I was going to do a Man Candy Monday retrospective of Kirk Douglas’ work, considering his recent death at the truly ripe old age of 103, but it would have ended up being about two dozen crappy a-historical Westerns set in Ye Olden Days, with a detour here and there to a film that had decent historical costumes. After about the sixth Western, I hit my limit, and had more or less written off the entire idea when The Boyfriend suggested we watch The Vikings (1958). (Don’t worry, Trystan took on the task of doing a Kirk Douglas Man Candy Monday post, which will be forthcoming next week.)

Now, understand this, The Boyfriend takes his Norse shit seriously, but he also has a deep and abiding love for the cheesy historical films that were probably played on reruns when he was a kid. I dunno, I grew up with Nick-at-Nite, so I missed out on the truly desperate TV programming of the early-1970s when you were held hostage by three channels and whatever they had secured the rights to play.

After a few cocktails were consumed, we settled in to watch The Vikings, and folks, I have to say, I didn’t hate it. In fact, there were several points throughout the film where I was impressed by the sets (shot on location in Norway, Brittany, and Croatia), the attention to detail (the longboats were impressively constructed), and the fact that they didn’t completely throw history overboard the way that the modern show of the same name has done repeatedly (“England? Where is this mythical land that we can literally see from the coast of France on a clear day. It couldn’t possibly exist.”) In short, there was less face paint and more bullet bras, but overall I am pretty cool with that trade-off.

The Vikings focuses on the feud between Einar (Kirk Douglas), son and heir of the fearsome Ragnar Lothbrok (Earnest Borgine), and an uppity slave name Eric (Tony Curtis), and the shenanigans that ensue when both inconveniently fall in love with Morgana (Janet Leigh), the bride-to-be of the English king Aella. Already, I’ve named four major stars of this era in one film, and there are more “hey, it’s that guy!” actors in the cast, so this was clearly a big budget endeavor, and the costumes and sets reflect this.

I’m not saying you should use this film as documentation for a Viking kit, but IF you were going to do so, it’s way better than The Vikings.

Can we just not?

The most historically plausible costumes are on the English, and for a film made in the late-1950s, they’re actually pretty decent. The Norse all wear way too much fur and leather jerkins, and we are treated to a lot of man-thigh in Tony Curtis’ skimpy tunic-and-manties costume (I’m not complaining, mind you), but even then, there’s a glimpse of proper layers and at least a basic understanding of what the Norse likely wore in the 9th century. A lot of the women are obviously wearing bullet bras under their gowns, but that’s par for the course with this era of film-making. But all in all, I wasn’t horrified; I was pleasantly surprised. 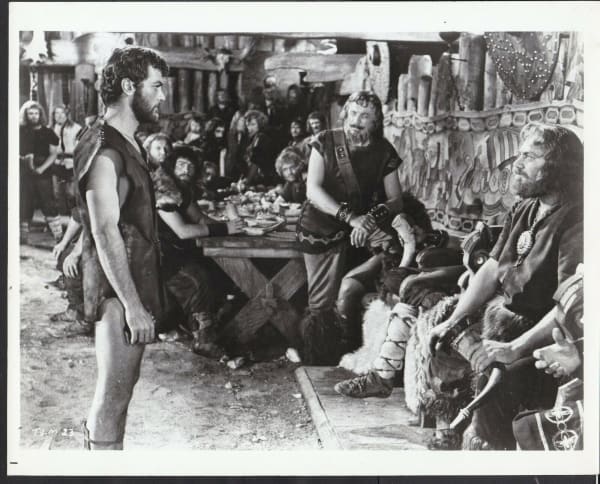 I’m just saying, it’s A LOT of manly thigh to deal with. But it does visually set Eric apart, as a slave, to the rest of Ragnar’s court. 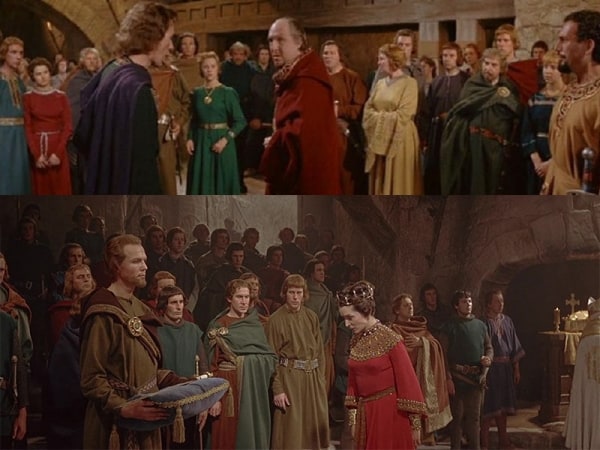 The English court’s costumes were pretty spot-on for what we know of early medieval fashion. I mean, it’s still filtered through the 1950s lens, but honestly, it’s better than we see in a lot of modern films set during this period.

Morgana’s crown is ridiculous and Not Period At All, but I really like Aella’s mantle and giant bow brooch. And of course, as the leading lady, Janet Leigh wears her hair down and uncovered for most of the film, but occasionally sports a veil. 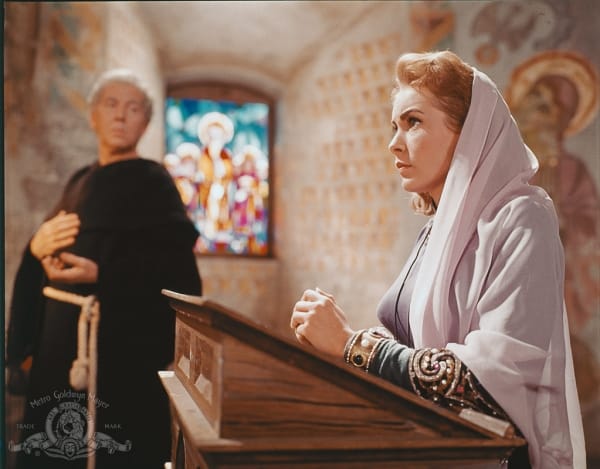 Appropriate headgear for praying in the chapel, like a good Christian woman. You don’t get to see much of the rest of this outfit in detail, but the embroidery on her sleeves is very evocative of early medieval Christian costume. 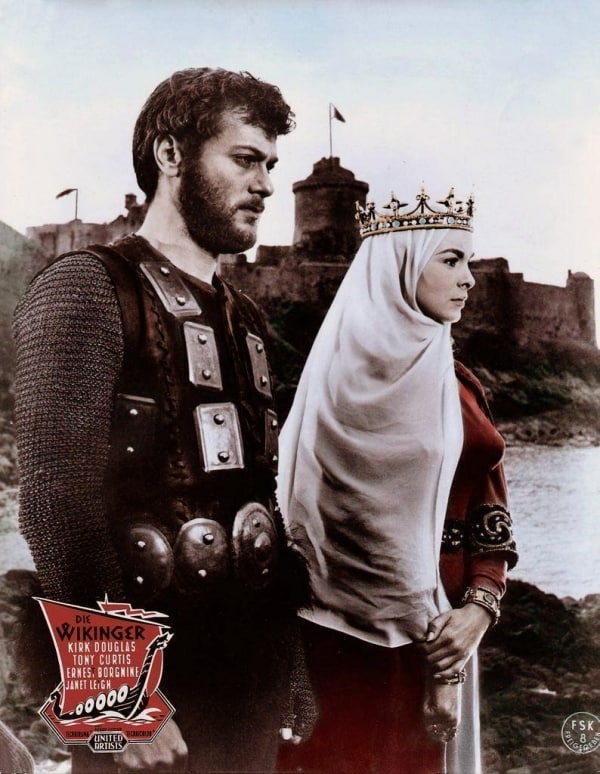 Not surprisingly, I really liked this veil arrangement at the very end of the film, when Morgana and Eric bear witness to Einar’s Viking funeral. His armor, btw, is pretty weird, but at least they have him in mail. 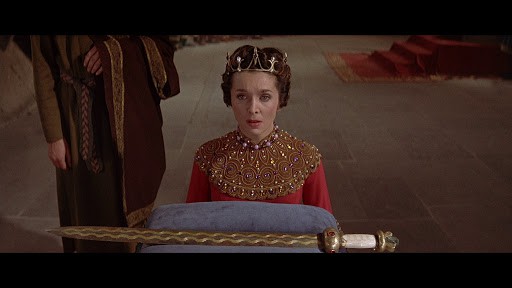 Also really liked the dowager Queen’s costume from the first few minutes of the movie. Again, the crown is pure Hollywood pretty pretty princess, but the ornate collar on her dress is evocative of the fashions worn during this period in the Byzantine court, which perhaps is a bit of a stretch for the backwater English court, but better than the usual Hollywood alternatives. 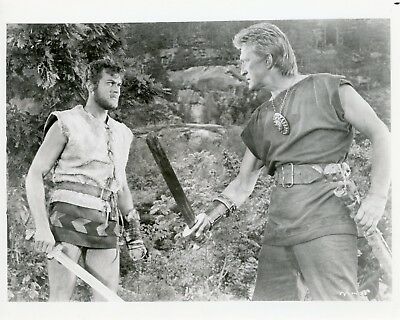 Einar and Eric both wear these kind of weird pillowcase tunics, like a Viking version of a sleeveless muscle Tee, I guess? 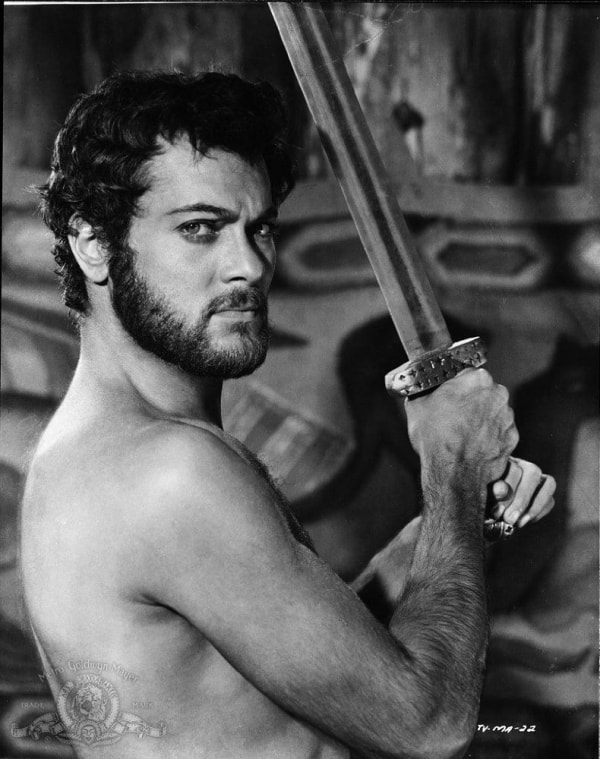 That is, when Eric is wearing a tunic at all… 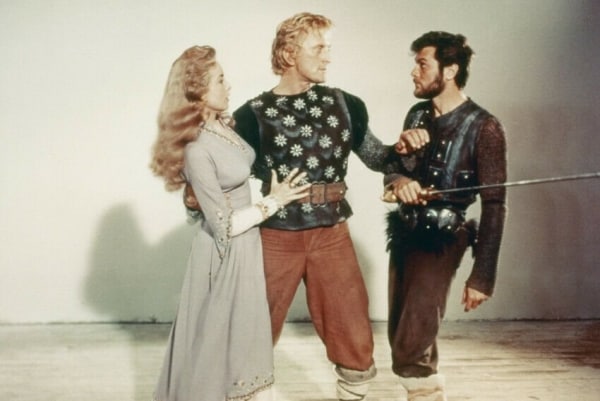 Hey, look! Eric got actual pants! The leg wraps you can kind of barely see on Tony Curtis and Kirk Douglas are kind of a misinterpretation of winnegas (narrow woven bands that were wrapped around the lower legs) but points for them at least trying. Janet Leigh’s bullet bra remains enduring.

The longships in the film are, to quote my boyfriend, “Dope as fuck.” 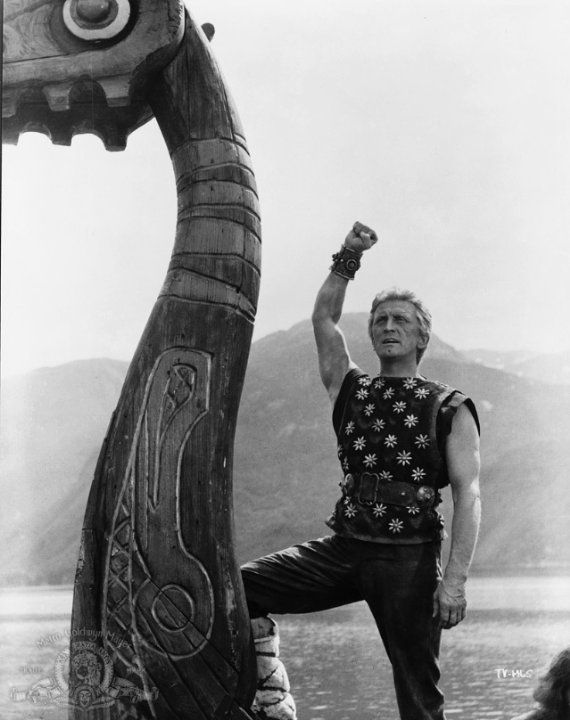 They also were seaworthy, even if the crews encountered some technical difficulties based on the proportions of 20th-century human males versus the considerably less robust 9th-century variety.

So, there are a handful of anachronisms worth mentioning, such as the fact that even though the film was shot in castles on location in Brittany, stone castles were very much not period for the 9th century anywhere. Wooden keeps were what would have been seen, but you know, as things go, I’m less stressed about the choice to use a crumbling stone ruin as a dramatic backdrop. Like, I’ll take man-thigh over things like face paint and smokey guyliner. It’s always a trade off.