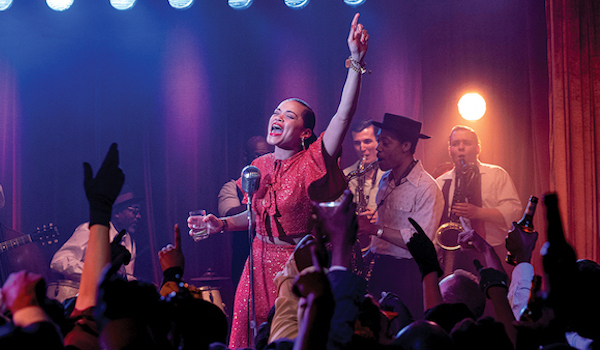 If you haven’t seen The United States vs. Billie Holiday, now streaming on Hulu, run don’t walk to see it! This biopic charts Holiday’s fight to perform “Strange Fruit,” her song that described the horrors of lynching, as well as her struggles with drug addiction and targeting by the Federal Department of Narcotics. Lead actress Andra Day justifiably won a Golden Globe award for her performance, and while the film takes some liberties with real history, it’s a compelling story that’s beautifully translated to film by director Lee Daniels. Also, hot sex scene alert!

The costumes are a standout, as they should be. Designed by Paolo Nieddu (Empire) in his first historical project, there’s a beautiful range of 1940s-50s evening/performance looks as well as day, with costumes that capture the period as well as the characters. Nieddu has done a ton of press, so much that there’s no way I can capture it all. So I’d like to focus on his overall vision for the film, as well as some specific costumes that were inspired by real-life looks.

In general, Nieddu wanted to capture the essence of the period without making strict reproductions. He told the LA Times,

“I knew Billie has a lot of fans, and there are a lot of people who might say, ‘That’s not realistic…’ But we created our Billie. It’s not an A&E ‘Biography’ documentary. This is ‘Lee Daniels does Billie Holiday,’ and that’s where I had to take my mind and focus. It became our interpretation of this time.” (Re-creating Billie Holiday’s iconic style was about finding and enhancing her essence)

He used a number of vintage pieces:

“[Billie] probably wore like, 35 or 40 pen-to-paper-made outfits, and then the other elements were vintage pieces that were sourced. All the jewelry was sourced vintage. The shoes, some of them were vintage sourced and some were new that were made to look old. Of the movie, maybe 70 percent of the main characters’ costumes would be made, and then the other 30 would be sourced.” (How Costume Designer Paolo Nieddu Recreated Billie Holiday’s Iconic Style)

He worked with fashion house Prada to rework items from their back catalog for some of the costumes:

“I had sent them direct research and my sketch of what I wanted to do, and then they interpreted that. Then, I also had go through their archive. We used pieces that existed from Prada, from collections past—some, going into 2007—saying, ‘Can we take the shape of this dress, from this look on this runway, and then make it longer, or make it fuller? And can you make it white?’ So, that was how I worked with them. I would send them those images, with my images of Billie, and then they would come back. It was sort of like this Frankensteined collaboration. (The Art Of Craft: ‘The United States Vs. Billie Holiday’ Costume Designer Paolo Nieddu Sculpts His Own Version Of Legendary Blues Singer)

“Billie was cool because we weren’t doing your typical birth to adolescence to fame journey with her. We were starting with her at a point in her career where she was already established. So that was a really great jumping-off point for me in terms of figuring out how she was going to look. I just started gathering all of these different images and separating them. ‘Here’s Billie in shirts, here’s Billie in dresses, here’s Billie in pants,’ and seeing what she looked like and how she wore her clothes and how she accessorized herself. That’s how I started to get my direction, whether I was sketching something pen to paper, or whether I was going into a vintage archival house, or looking online.” (Paolo Nieddu on Creating the Looks for The United States Vs. Billie Holiday)

“It’s important when we talk about her fashion that we remember how radical it was for a Black woman to be in her position during that era. Mainstream society had a problem with seeing Black women in the context of success. In those days, uppity was still part of the vernacular. People said, ‘How dare she wear diamonds, how dare she wear fur,’ but she dressed as a woman of her stature should have. She represented herself exactly as she wanted to and that in itself was revolutionary.” (How The United States vs. Billie Holiday Uses Runway Fashion to Honor Its Radical Muse)

Now, let’s look at some specific outfits, in particular those that were inspired by real-life Holiday looks:

“[This gown was] based on a really grainy, tiny photo I found online of her at her Carnegie Hall performance. This one kind of morphed [over time] into what it was. I had one fitting, and it was a muslin fitting, which is when you fit it in a cotton, just to get the base and kind of see where we’re going. We tried that on; we scrapped it. I went back to the drawing board, and came up with this. I exaggerated the shoulder, and created this dramatic center-front piece. I wanted it to have some kind of a drama, when she walked out onto stage. I took the interpretation from this photo and glamorized it using elements of the time, like the strong shoulders from the ’40s. The waist piece gives a nod to Adrian, an amazing, fabulous costume designer from the MGM Golden Era, and this is sort of like my tribute to Adrian on Billie.” (The Art Of Craft: ‘The United States Vs. Billie Holiday’ Costume Designer Paolo Nieddu Sculpts His Own Version Of Legendary Blues Singer) The inspiration: Billie Holiday performs at Carnegie Hall in 1948. The finished costume as seen on screen. It was made from black silk crêpe, silk chiffon and bugle beads, and the mix of textures is really beautiful (as is the drape over the shoulders and in front on the skirt).

“Inspired by a shimmering lapel-halter style dress Holiday wore onstage at the Free Trade Hall in Manchester, England in 1954, Nieddu looked to a strapless confection from the Prada Fall/Winter 2004 runway for the molded bodice and bust. He then incorporated the halter straps and luminous lamé fabric, but in red, from a Spring/Summer ‘09 dress and elongated the skirting to floor-length.” (The United States Vs. Billie Holiday Costumes Honor History With Contemporary Prada) Billie Holiday in Manchester, England in 1954 via Getty Images. This is a close replica of the suit Holiday wore in court in 1947. PHILADELPHIA – MAY 20: Jazz singer Billie Holiday (R) is read the charge for heroin possession at the U.S. Commissioners Office, seated next to her are her pianist Bobby Tucker (C) and road manager James Asendio (R) on May, 20, 1947 in Philadelphia, Pennsylvania. (Photo by Michael Ochs Archives/Getty Images) The suit on screen.

“In 1947 at the famed Downbeat Club, jazz photographer William P. Gottlieb snapped Holiday in a black and white broderie anglaise gown with an oversize bow at the bustline … Nieddu precisely—and ingeniously—detected a throughline to the original bodice from a car racing uniform-reminiscent of a Spring/Summer 2012 maillot in a totally different fabrication. … Nieddu then worked with Prada to translate the patterns and lines onto black taffeta and white 3D floral embroidery, lower the bow to the waistline, and drop the hemline to the floor.” (The United States Vs. Billie Holiday Costumes Honor History With Contemporary Prada) The screen costume has different color blocking on the bodice, and they’ve moved the bow to the waist.

This was probably my favorite, as it captures some fabulous elements of 1940s fashion.

“Nieddu took inspiration from Holiday in a puff-shoulder and sequin-embroidered dress from a September 1946 issue of Look magazine. He transformed the draped shoulders from a Fall/Winter 2017 last look into a long-sleeve, v-neck bodice and looked to Resort 2011 for the languid skirting. Nieddu then worked with fellow costume designer and artist Maria Hooper to sketch a crystal-work pattern for the Prada artisans to embellish onto marigold silk satin.” (The United States Vs. Billie Holiday Costumes Honor History With Contemporary Prada) The color is great, the beading is beautiful, but it’s All About That Sleeve. Billie Holiday’s “This Is Your Life” Dress

In the film, Holiday wears this to film an episode of the TV series This Is Your Life.

“Nieddu paid homage to Holiday’s off-the-shoulder floral dress for a Valentine’s Day performance in 1954. He referenced a Fall/Winter 2019 look for the pleating and twist on the bodice and a ‘50s-inspired knee-length look from Fall/Winter 2013 for the flared silhouette. But a ‘silvery blue satin floral’ brocade from Spring/Summer 2018 is an absolute jaw-dropper in likeness to Holiday’s actual dress.” (The United States Vs. Billie Holiday Costumes Honor History With Contemporary Prada) “For her last major jazz concert, at Town Hall in 1958, she wore a strapless white gown with contrast pleating and crystal embroidery on the bodice. For the film’s version, Nieddu looked to the body-hugging silhouette and plunging sweetheart neckline from a Spring/Summer 2014 dress. He then worked with Prada’s dressmakers to bring the hemline to the floor, add a train and embellish the entire gown with geometric beading and crystal-work.” (The United States Vs. Billie Holiday Costumes Honor History With Contemporary Prada) Billie Holiday backstage at Town Hall at her last major jazz concert before she became ill. Acknowledged to be one of the greatest jazz singers, Lady Day, as she was called, worked with Count Basie, Teddy Wilson, Artie Shaw, and Benny Goodman. But Holiday’s life was tragic, marred by drugs, and ended in 1959 at the age of 44. (Photo By: /NY Daily News via Getty Images) The film version uses much larger beading and skips the asymmetry. But from afar, it’s glorious.

And a Few Other Looks This casual shirt and trousers was SO chic and SO cute!

This white beaded gown, which I can’t find a fuller image of: … was incredibly complicated to make:

“It was glass, bugle beaded fabric, so it probably weighed 20 or 25 pounds … This dress probably took 72 hours, or maybe more, of just handwork. They would have to smash the glass, to sew it. They’d have to remove the beads, so they were taking a rubber mallet, and they would break the beads. Then, after she patterned it all out, based on how we drew it, it was [made] into two pieces that swoop across her bust.” (The Art Of Craft: ‘The United States Vs. Billie Holiday’ Costume Designer Paolo Nieddu Sculpts His Own Version Of Legendary Blues Singer)

And finally this pink gown: “There was a vintage dress that I saw that was the worse for wear. It was falling apart, and I really wished we could use it, so I basically took that and used it as an example to create this fresh, baby pink satin dress. Billie is the Lady in Satin, so I definitely wanted to incorporate that into her wardrobe. I added a really full crinoline underneath it that was a really stiff tulle that I’d seen, and I heightened it and made it fuller.” (How Costume Designer Paolo Nieddu Worked With Prada For “The United States vs. Billie Holiday”)

If you’re interested, you can find more of Nieddu’s thoughts on costuming other characters in many of the linked articles.

Have you seen The United States vs. Billie Holiday yet? What did you think?