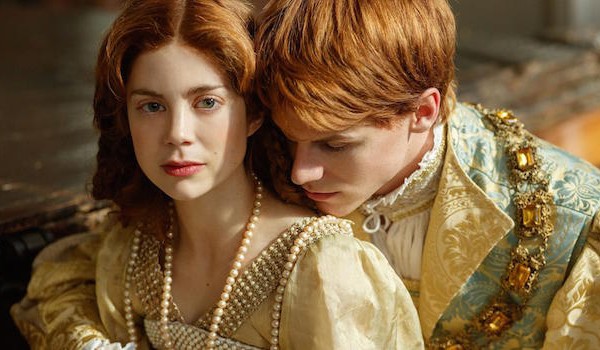 It’s Festivus, aka, The Spanish Princess (2019), Starz’ new adaptation of a Philippa Fucking Gregory book about Catherine of Aragon, has premiered! Strap in for all sorts of historical wtf-ery and some deeply wackjob costuming by Phoebe de Gaye in the last of many recaps. Frock Flicks is a family: if I have to suffer, you have to suffer with me.

We did it! It’s the finale! We survived! Until season 2.

Henry VII dies while in the bathtub, hanging with his mom. He coughs a little bit, puts a handkerchief over his mouth, and suddenly is coughing blood and dies. Poof! Margaret Beaufort is immediately trying to cover it up until Prince-now-King Henry VIII can be brought to court. She’s running around crazily. 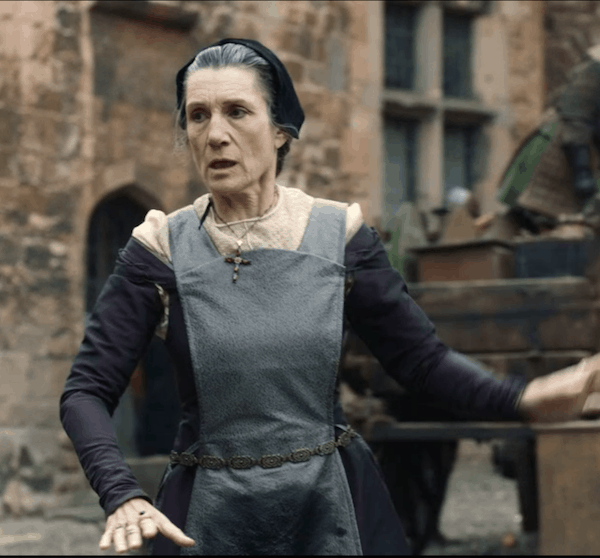 She was wearing a gable hood, but when Henry dies, she loses that and spends the rest of the episode in a velvet cap (which was, presumably, under the hood).

Oviedo figures out the king has died, despite nothing having been announced, and warns Lina… 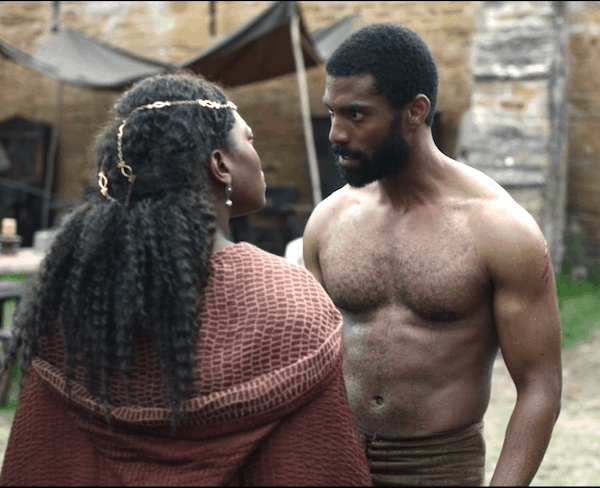 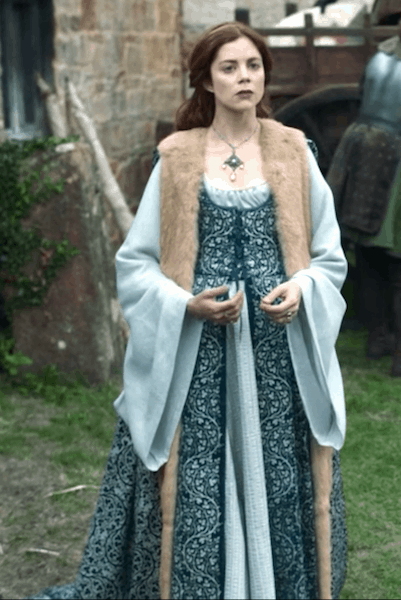 I think this is the undergown she briefly wears in the last episode, now with a lose gown over it?

“Maggie” Pole was arrested in the raid, she’s in the Tower with her kids. Catherine visits her and vows to get her released. 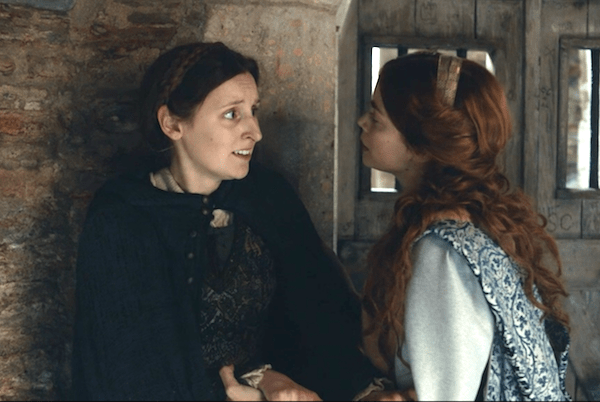 Margaret Beaufort is suddenly freaking the fuck out about the taxes her government was raising, saying they’re illegal and they need to find someone to take the fall. Future Cardinal Wolsey has popped up here and there amongst the king’s advisors. 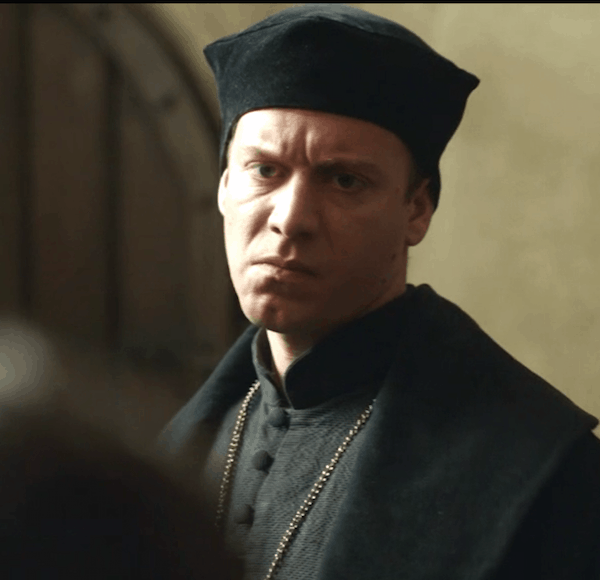 Catherine knows Henry has been summoned, and apparently there’s only one road into London from the north of the city, so she goes and waits for Henry to ride along. When he does, she intercepts him and tells him that his father has died. The two have a moment — Catherine tells him she loves him, and asks what her fate will be. He tells her they’re royals and they make their own destiny, so of course she will be his queen. 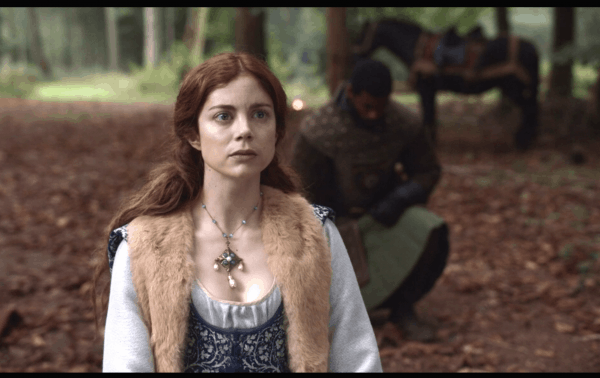 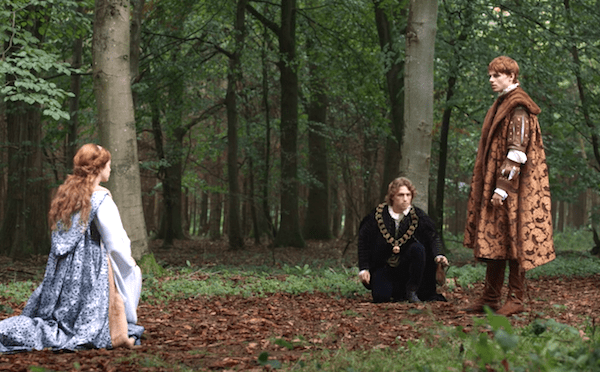 Margaret Beaufort has decided that Dudley (grandfather? to the future Robert Dudley, Earl of Leicester, who will be Queen Elizabeth I’s love) should take the fall for these illegal taxes. She’s worried the now King Henry VIII will find out about the taxes and be pissed. She has Dudley seized and immediately beheaded without a trial. The executioner botches the beheading, giving Dudley time to tell them all off while spurting blood. 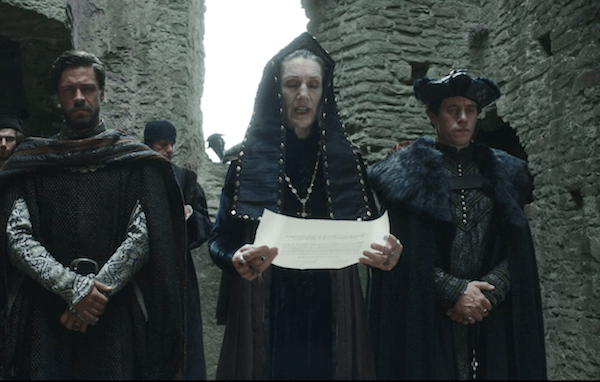 Henry VII is laid out in the chapel, Henry VIII goes to the funeral mass. Midway through, there’s a confrontation with Margaret Beaufort about the taxes and Dudley having been executed without trial. 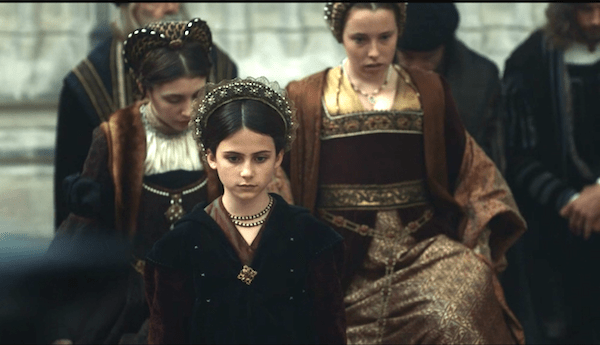 Princess Mary, looking halfway decent, along with the various extras as well. Why can’t everyone look this good? 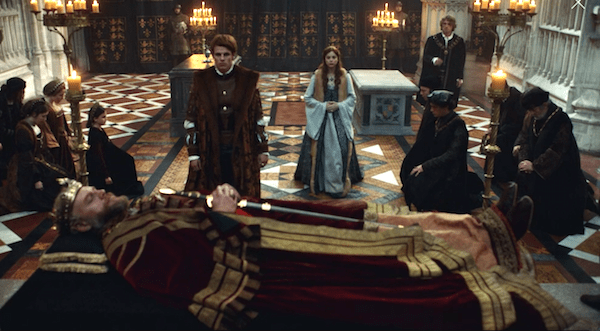 Margaret Beaufort goes to crazytown, running around like a madwoman. She figures out that Oviedo must have warned Catherine, and has him arrested for supposedly stealing a book she gave him. Oviedo is arrested, Lina is distraught, and they get married asap in a combined Catholic/Muslim ceremony (one of O’s fellow soldiers officiates for the Muslim portion). Lina tries to save Oviedo’s life, finally admitting to Margaret Beaufort that Catherine and Arthur’s marriage was consummated. Then the soldiers immediately hang Oviedo; he’s dangling from the rope when Catherine and Henry burst in and have him cut down, barely saving his life. 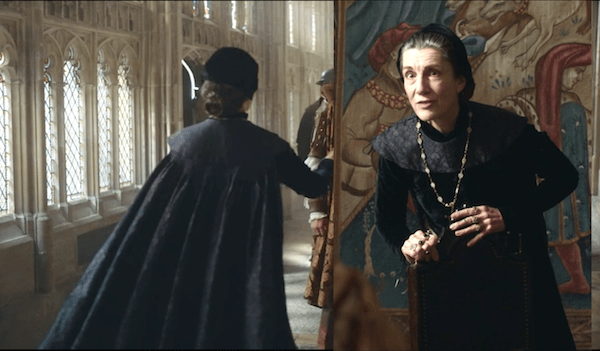 At some point Margaret changes into this loose gown.

Margaret Beaufort crazily tells Henry that Lina has admitted Catherine and Arthur’s marriage was consummated, but Henry tells her to bring him Lina and have her swear again that this happened. 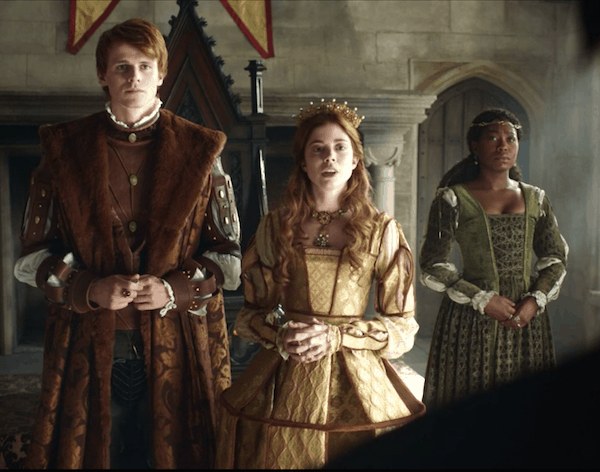 Back in the windmill dress and clomping around ridiculously.

Catherine is being dressed for her wedding. 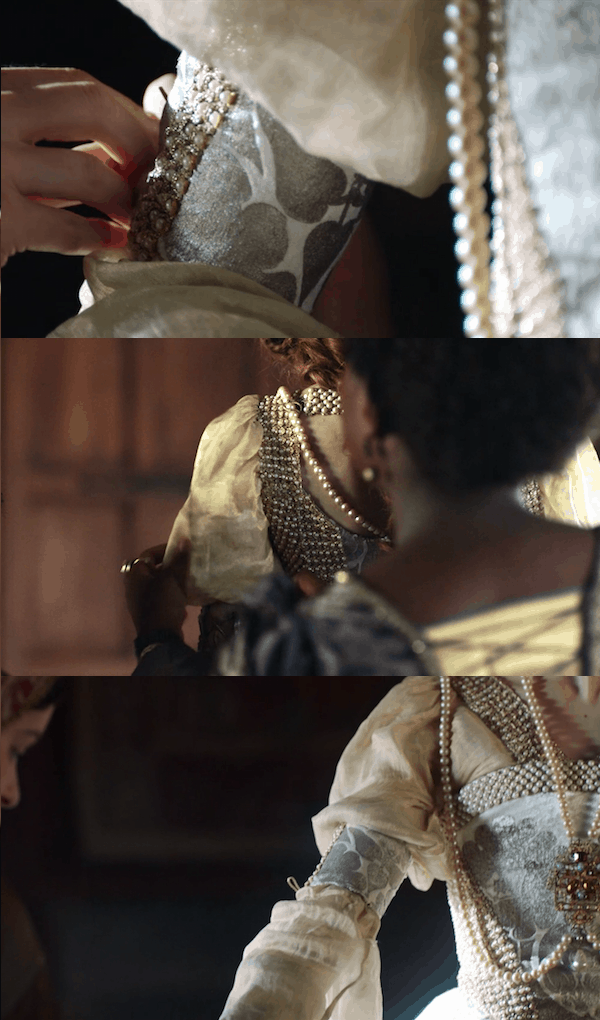 Close up shots of the wedding dress. 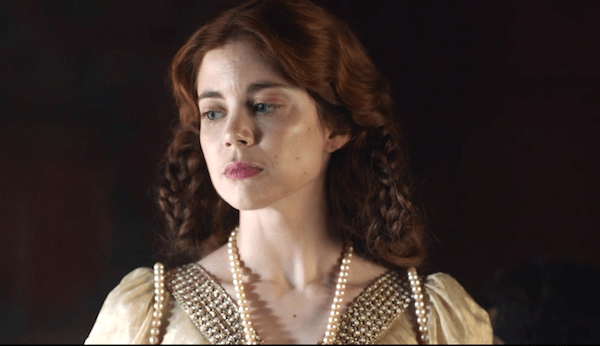 Don’t get too excited, her hair is down in back. I have questions about the pearled bands on her chest, which are at a weird angle, and look more like rhinestones than pearls from far away. 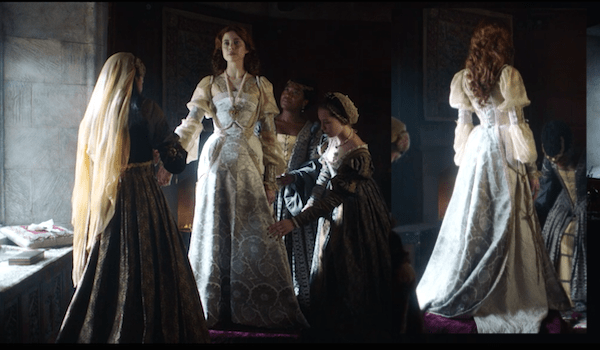 Catherine’s wedding dress is actually quite pretty, if I ignore the sleeves, and the weird rope ties on the sides.

“Maggie” Pole is at court, dressed up all fancy (for the wedding?). She hears Margaret Beaufort calling sickly, and goes to her room to find her unattended. Margaret is seeing visions of the Princes in the Tower, which, according to Philippa Fucking Gregory/The White Princess, she had murdered. “Maggie” basically tells her she’s a horrible person. 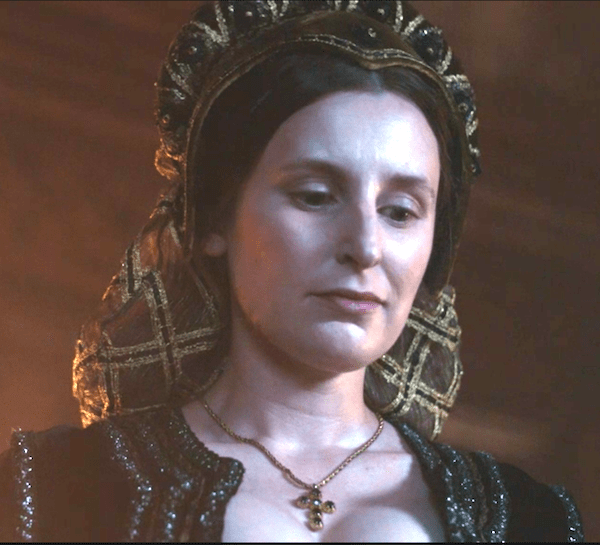 Some kind of roll/snood combo? 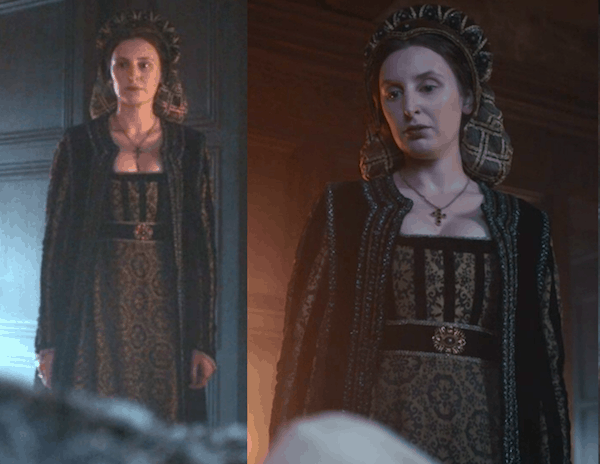 I don’t hate the outfit, although why she’s sticking with the higher waist style is unclear.

Catherine receives a letter from her father, who wants her to know what kind of man she’s marrying: her sister Joanna told him that she and Henry had sex while she was visiting. AS THOUGH JOANNA WOULD TELL FERDINAND SUCH A THING, AS THOUGH FERDINAND WOULD CARE, AS THOUGH FERDINAND WOULD WRITE HIS DAUGHTER A SNOTTY “JUST WANT YOU TO KNOW WHAT KIND OF MAN YOU’RE MARRYING” LETTER. Ahem. Catherine goes to confront Henry, who is praying the chapel. He denies shagging Joanna, all is resolved, until he says, with a knowing look, “Of course, you didn’t have sex with Arthur, right?” And Catherine says, “Right,” all with a look on her face of “what have I gotten myself into.” 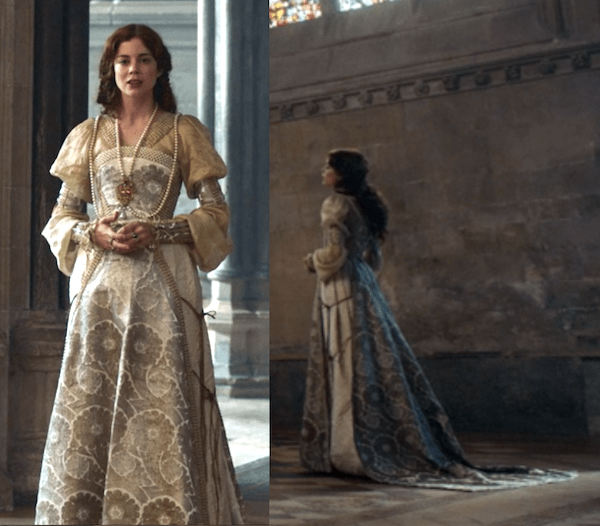 More wedding gown: that damask is NOT a 16th c. pattern (maybe art nouveau?), and the side ties annoy me (plus the overly poofy chemise), but otherwise, I do think it’s pretty. 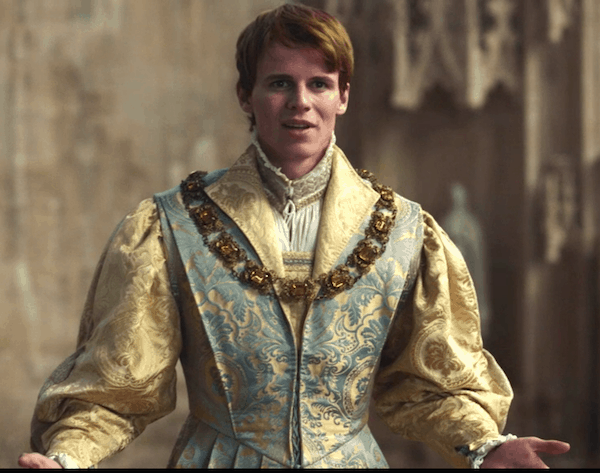 Henry goes easter colors for his wedding outfit? I’m mostly good with it, but my eye was immediately drawn to the lacing gap at the waist.

And, we did it! We survived! What travesties await in season 2? Do you want recaps?