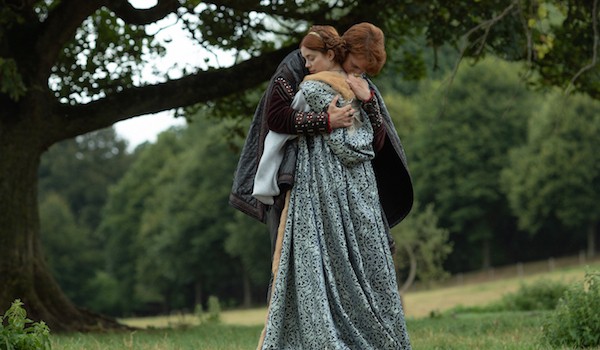 Prince Henry argues with the king about pops’ plan to marry Catherine. Margaret Beaufort is grumpy about “Maggie” Pole. 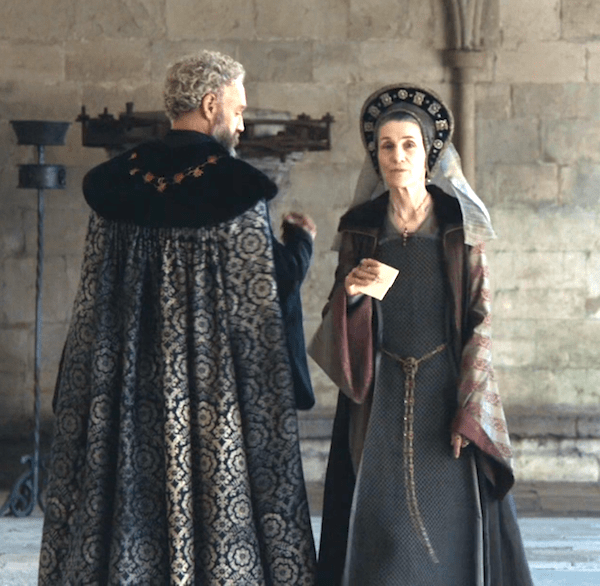 Catherine has a meal with King Henry, where he tries to gently woo her. 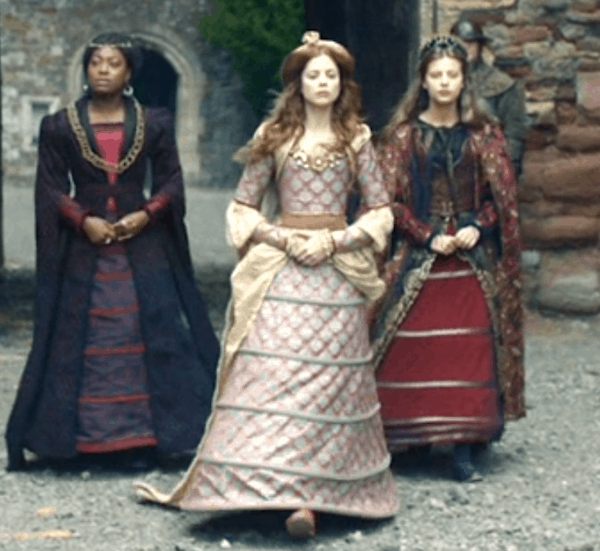 Catherine adds some kind of beige overlayers to her printed-quilting-cotton dress that look like burlap from far away. I have many questions about the print/design Rosa is wearing. 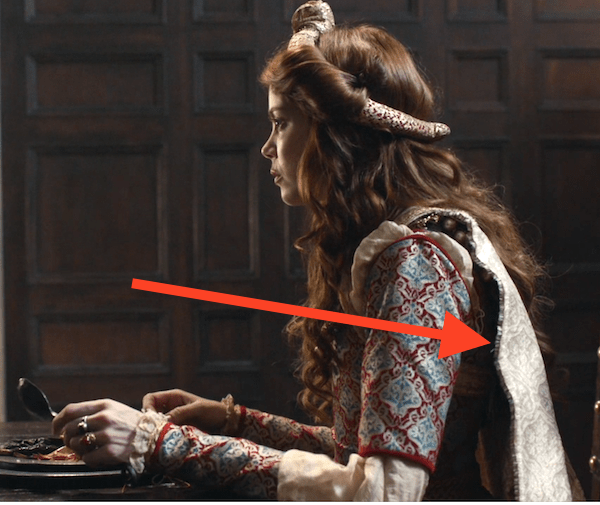 Up close, you can see that that beige fabric is a brocade/jacquard, but… THE BACK CAPE ISN’T FINISHED, THEY JUST USED THE SELVAGE, which wouldn’t bother me so much except for the THREAD FRINGE.

The king has Catherine pose for a portrait. 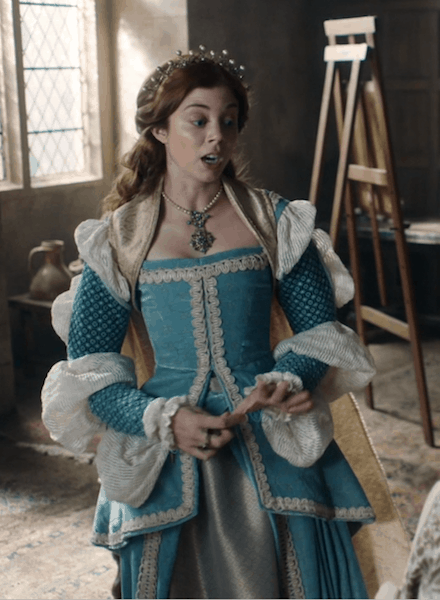 Must preserve the upholstery trim fantasy maiden of yore dress for posterity!

“Maggie” Pole is happy having been banished to her country house with her children; her husband keeps trying to point out that there’s no escaping the court intrigues and she needs to suck it up for the sake of their children. He finds a book she’s looking at that has her cousin’s (who is currently leading a rebellion) inscription it, and warns her that she has to tell the king if her cousin has contacted her; she denies he has. 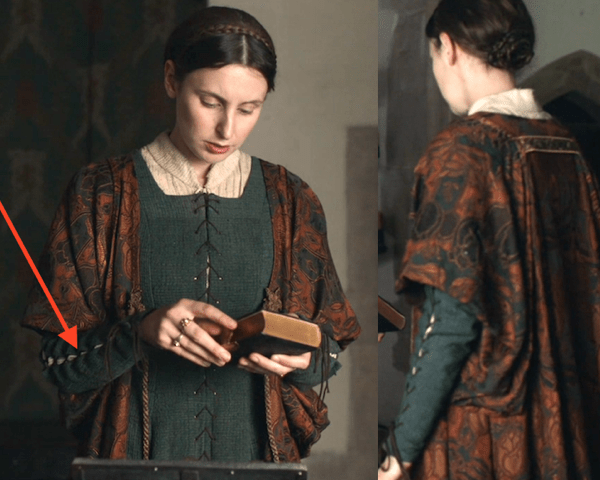 Unnecessary lacing on the sleeve.

Henry accosts Catherine while she’s praying and throws a tantrum because she won’t say she wants to marry him and not the king; Catherine rightly argues that her choices are limited. 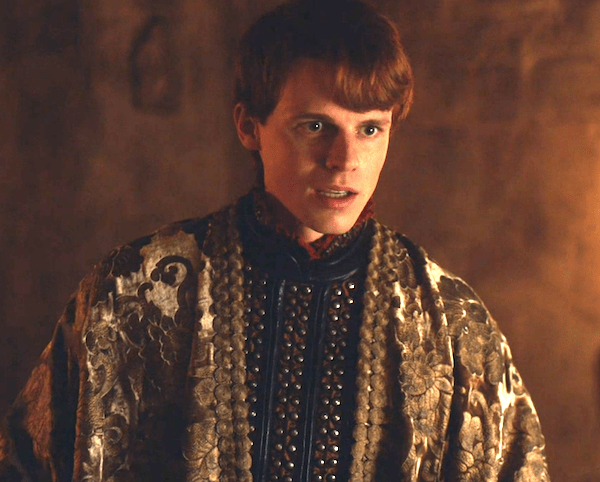 Princess Margaret arrives in Scotland, and is thrilled to discover her new husband is young and hot. He has a passel of bastard children who are there to greet her. 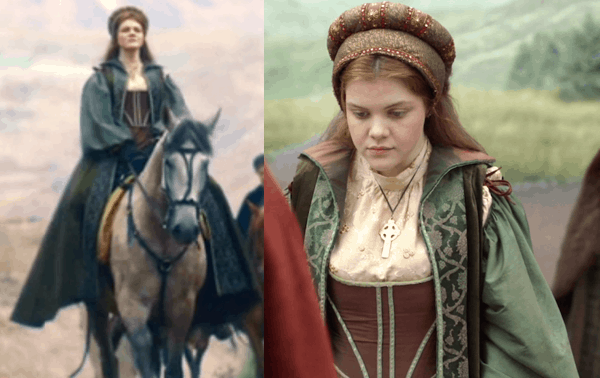 All she needs to do is lose the machine-embroidered, high necked chemise and she’d start looking much more attractive… 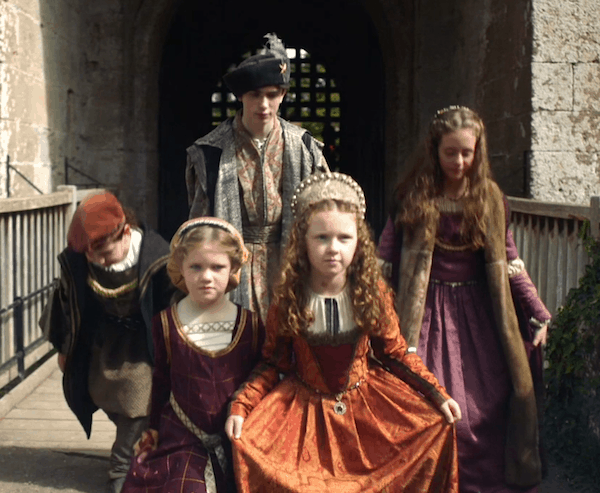 A fun variation on skirt hiking: the skirt-hiking curtsy! For your most ungainly of ladies/girls/whatever!

Margaret Beaufort informs Lina and Rosa who they are going to marry (Lina is going to marry Charles Brandon, which, wtf?). Rosa, however, is pregnant by her married lover the Duke of Stafford. 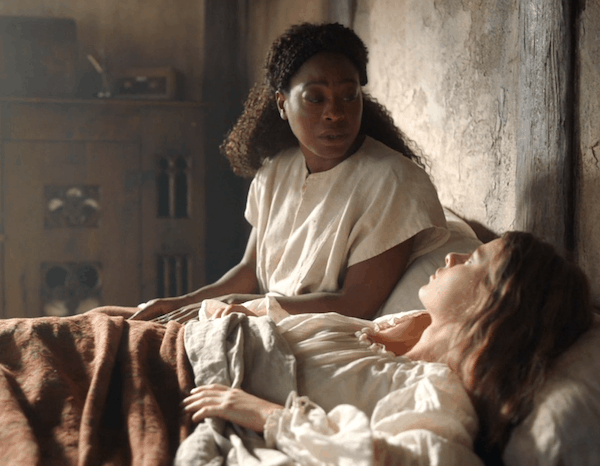 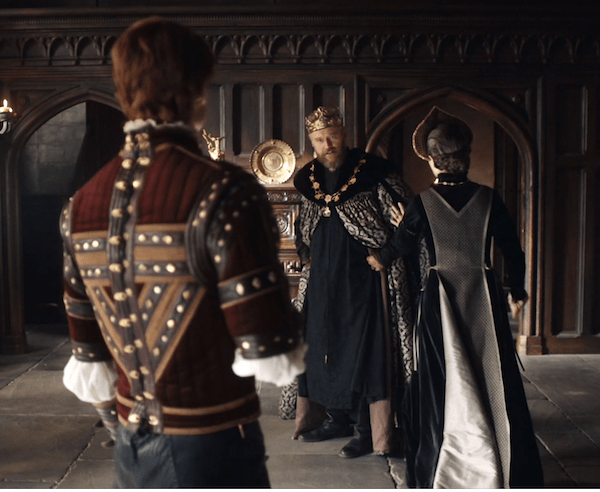 Lina goes to Oviedo for advice on where to get Rosa help with an abortion. Oviedo is still grumpy that she won’t run off with him. 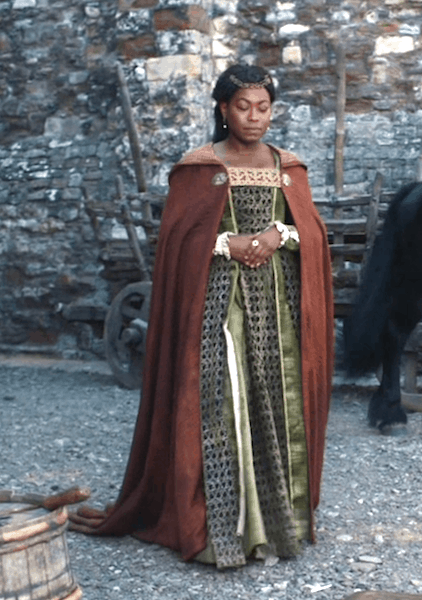 Lina goes to a whorehouse to get an abortifacient for Rosa. The madam is very suspicious, saying that she’s one of Catherine’s ladies and wouldn’t it be terrible if this news got out. 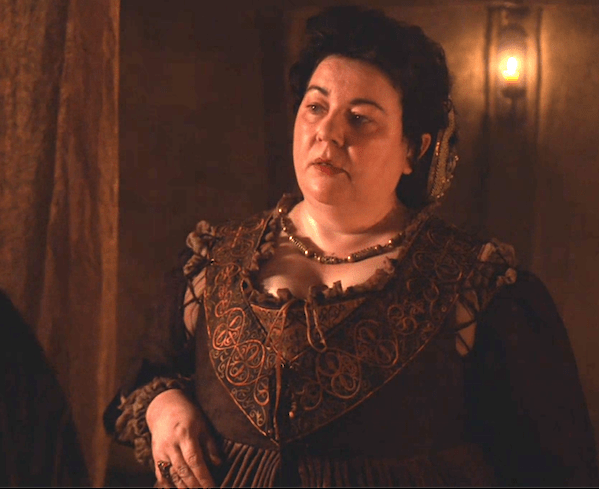 Margaret Beaufort tries to soothe Prince Henry by getting the Duke of Stafford to bring him a bunch of whores. 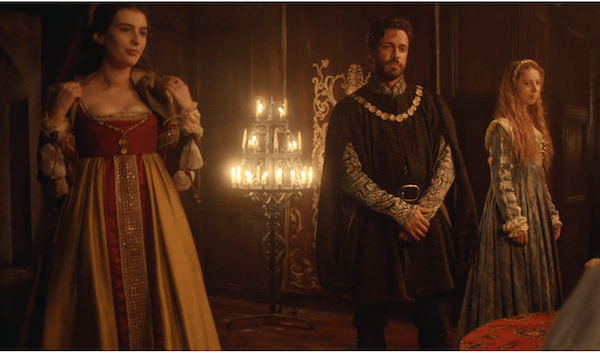 Wearing the entire wardrobe from The Borgias? 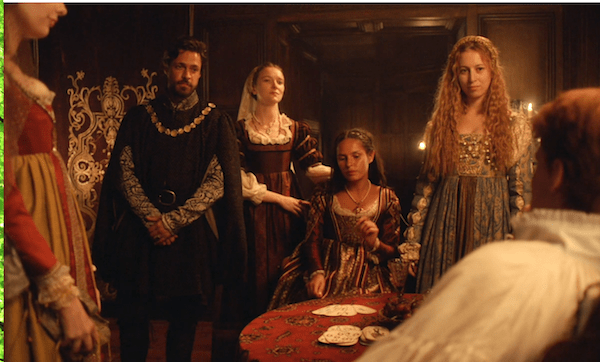 Henry resists the whores, and tells Margaret Beaufort that he’s in love with Catherine. He turns up at Catherine’s house in the middle of the night to tell her that he wants to fight for her; she’s very “I have to do my duty/I have no choice.” He kisses her. 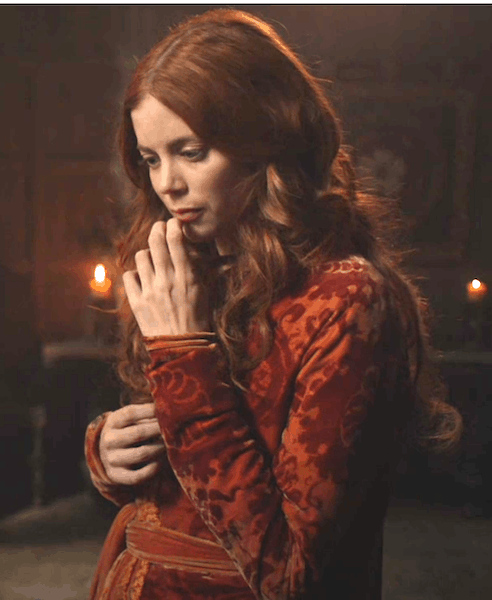 “It’s cool, there’s nothing scandalous about a guy turning up at my house in the middle of the night while I’m wandering around in my dressing gown.”

Lina is upset that Catherine may be choosing her heart (Prince Henry) over her duty (King Henry). She confesses she’s in love with Oviedo. Catherine is a jerk about it, and basically says she’ll be thrown out with nothing if she marries him. 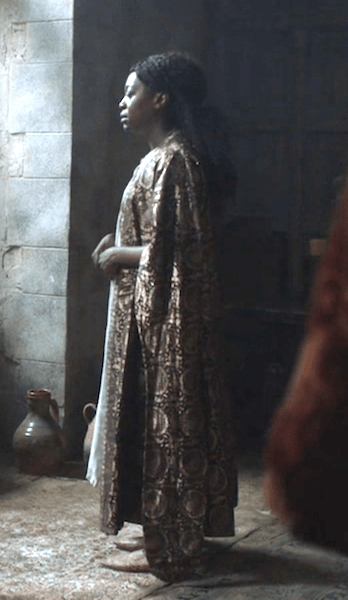 Catherine decides to randomly take Lina and go to visit “Maggie” Pole to apologize for getting her banished. No one seems to question the two gallivanting around the countryside. Catherine essentially confesses she’s in love with Prince Henry to Mags; Mags warns her that he’s very passionate but not very constant. On the way home, Catherine tells Lina that she will support her marriage to Oviedo and give her a dowry. 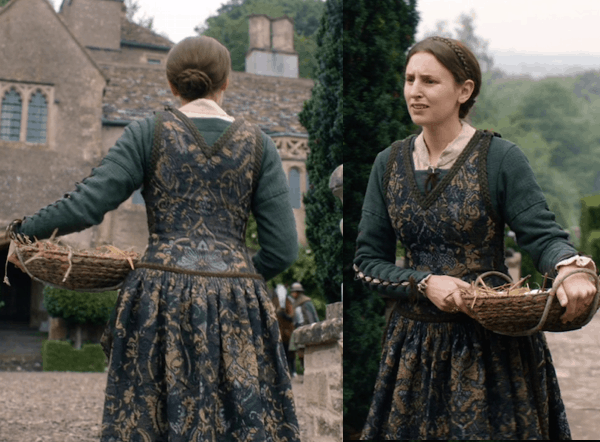 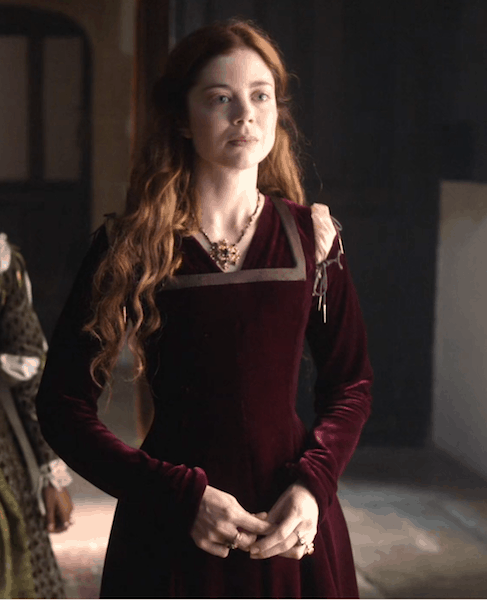 Queen Isabella writes scathingly (no idea why) to Catherine giving her permission to marry King Henry. She drops that Catherine’s sister Juana has gone mad after the birth of her child. 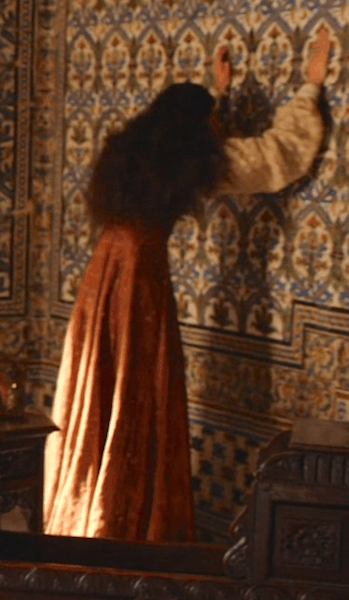 Catherine’s portrait is (ahem) coming along. 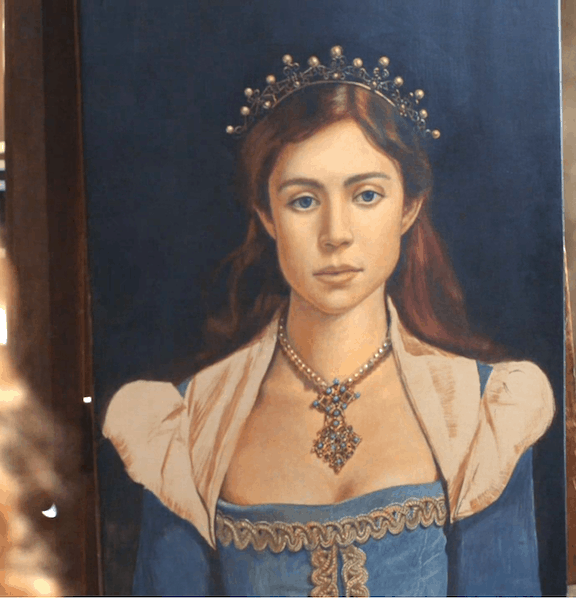 Catherine tells Henry to randomly meet her in a field, where HER HAIR IS UP/MY JAW HAS DROPPED and she tells him she loves him and wants to marry him. He’s shmoopy. 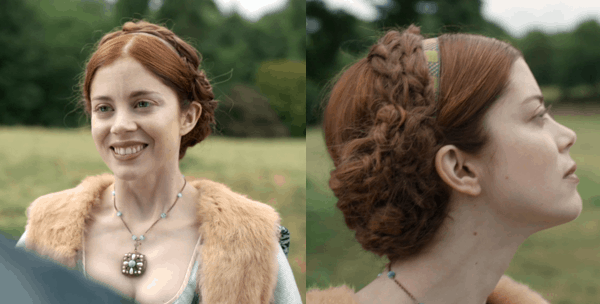 WAIT WHAT? Maybe she stole “Maggie”‘s hairpins when she visited??!! 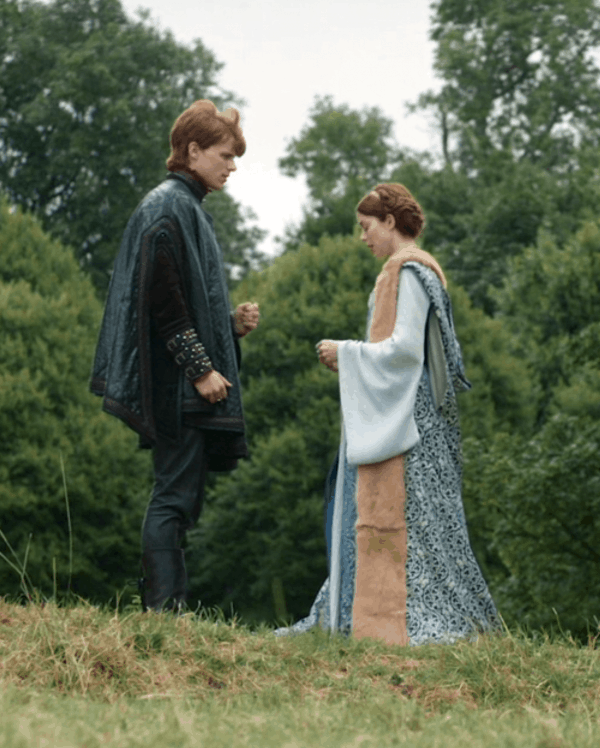 I have questions about those sleeves.

Catherine goes to King Henry and points out the obvious, that if KH marries her, the Spanish alliance ends with his death since any children they have won’t inherit the throne. Of course, in reality, KH was also very interested in keeping Catherine’s dowry. 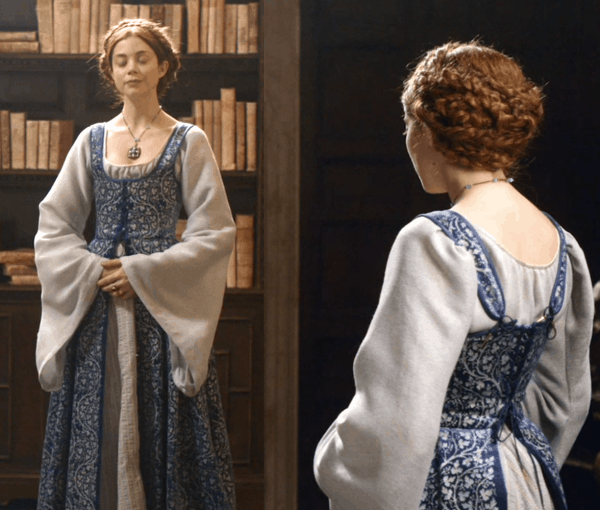 Okay, so the front & back lacing could work if it’s a kirtle (an undergown), but then WHY IS IT SPLIT IN BACK.

Rosa can’t bring herself to have an abortion. She goes to the Duke of Stafford and tells him in the middle of an archery social that she’s pregnant, and all she wants is for him to find her a place to live and support the child. He says ok, but there’s some foreshadowing that things may not work out. 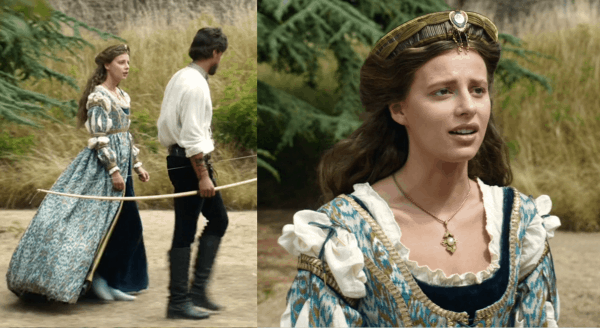 Is that… ikat print?

King Henry summons Catherine to tell her that he agrees she and Prince Henry can marry, surprising Margaret Beaufort, but warns her ominously that the rest of her dowry must be paid. 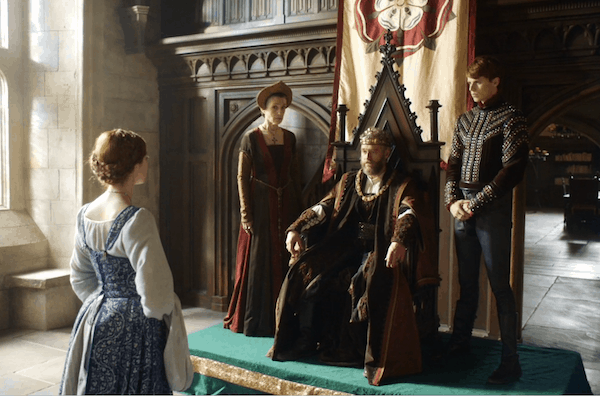 And in a ridiculously obvious accident, “Maggie” Pole’s husband is crushed by a wagon and dies. 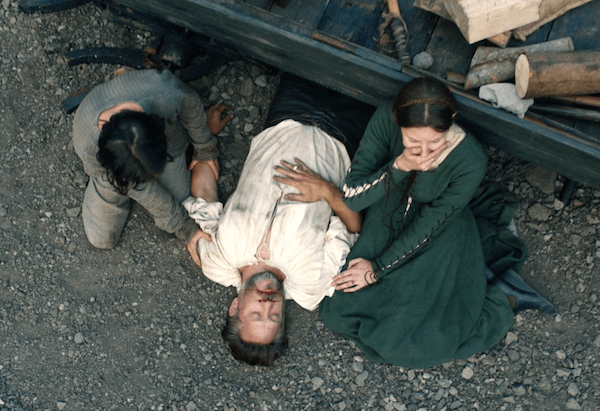 How many head necklaces await us in the next episode?