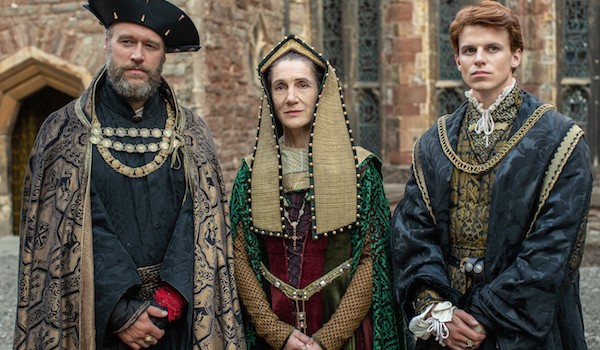 Sorry this one is late! I was at the Fêtes Galantes at Versailles in Paris (go ahead, hate me if you must) swanning about in an 18th-century costume in the Hall of Mirrors. Life is hard! In fact, I’m writing this from Paris where it is currently 3 million degrees, but the pain au chocolat is divine … Luckily, you’ll get another Spanish Princess recap (episode 5) tomorrow! Onwards!

Various people are plotting against the Tudors! Some unknown person is massing an army in France to invade England. Luckily Margaret Beaufort has spies everywhere. 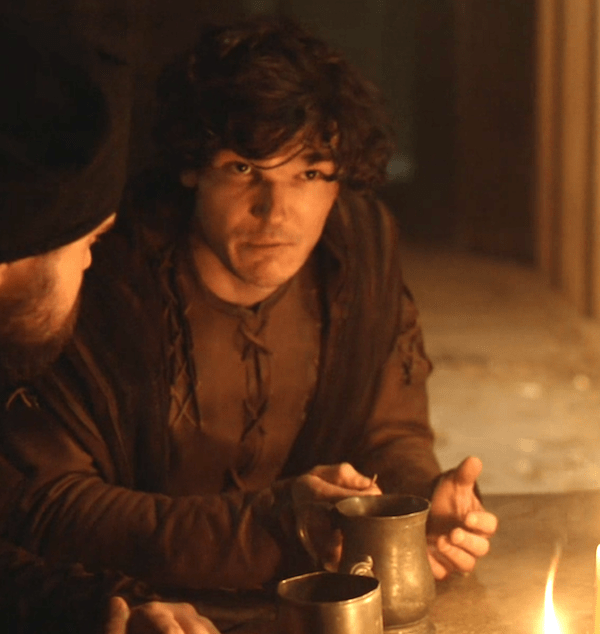 A plotter with boy-band hair.

Prince Henry has a sad, because his mother is dead. Catherine cheers him up with yet another random story of Life in Spain (olé!), this time about a bull. 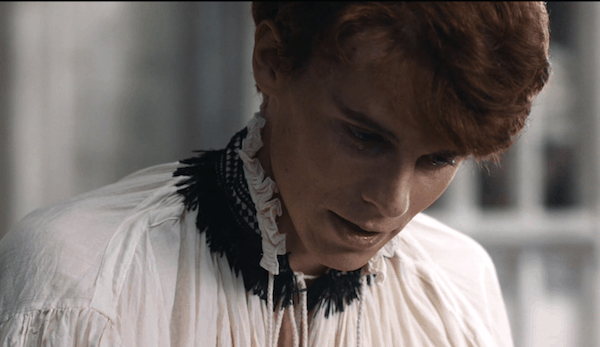 I ranted about this deeply shitty attempt at 1970s macrame blackwork in one of my preview posts. 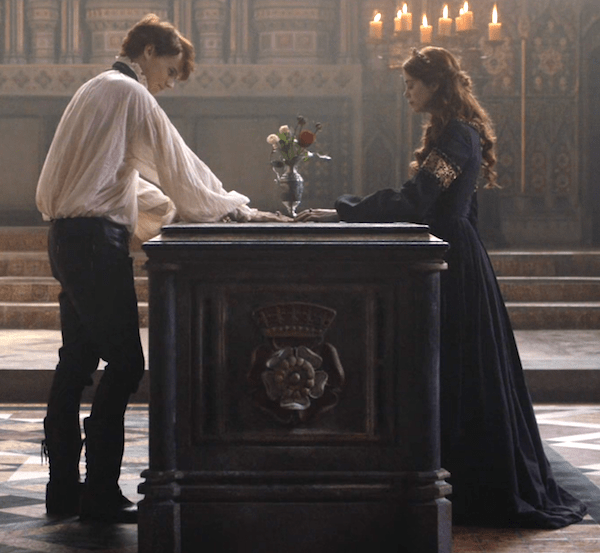 Henry looks RIDICULOUS in his lead singer of a New Romantic group gear.

Rosa is constantly discussing whether she and Lina will be marrying Tudor nobles as promised. Lina is constantly trying to get her to shut it. Rosa is also still shagging her married English lord. 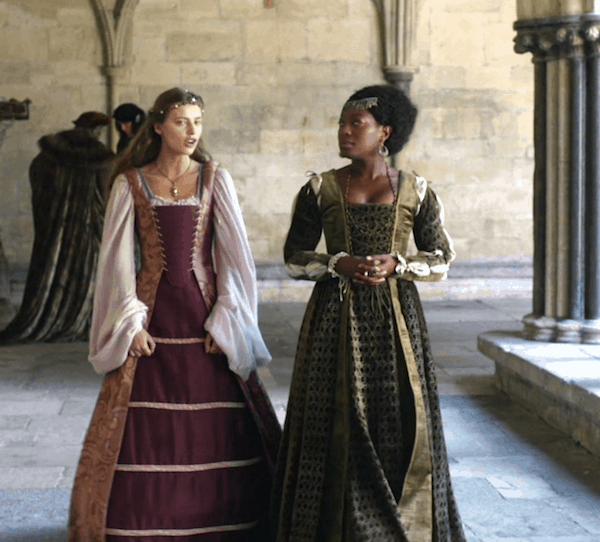 Henry VII is despondent about his wife’s death and is unwashed and hanging with lions. Margaret Beaufort tries to talk sense into him, then declares she will serve as regent until Henry gets his shit together. She holds a council with various lords and discusses all the various anti-Tudor plots.

Weird cape-y thing on her dress. 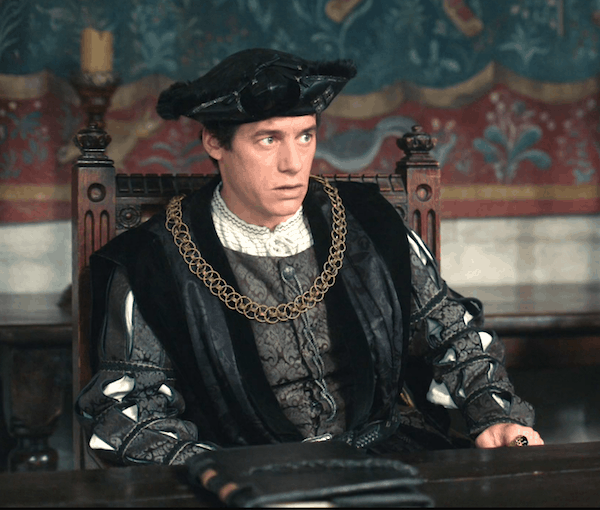 The various guys look pretty decent, especially the more minor ones who actually get hats.

Henry VII tipped off Margaret Beaufort about Prince Henry’s plan to marry Catherine, and she is Not Having It. Mostly she seems concerned that it’s a sin; also she seems to think Catherine is a schemer.

Mags shows up in Catherine’s apartments and THROWS HER OUT. Not, like, “hey, we’ve arranged lodging for you at X location,” but “get out.” 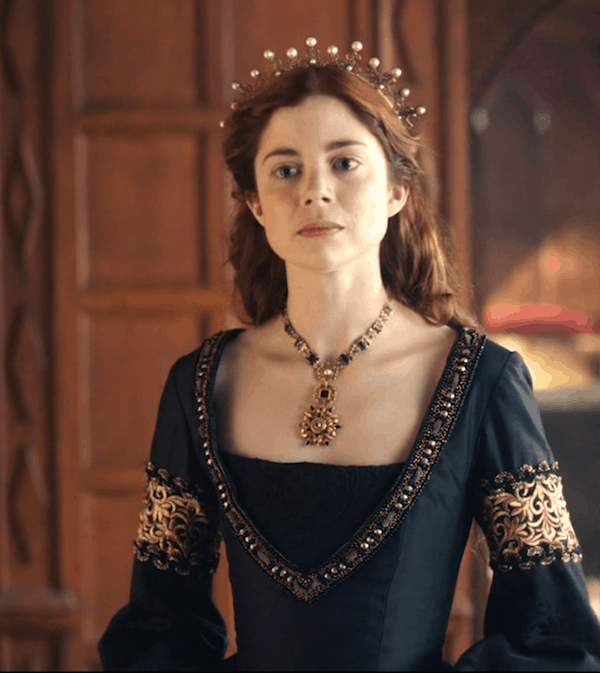 I spent this entire episode thinking “Catherine would look so much more royal if she actually owned more than 2 hairpins.” People, updos can BE ELABORATE and therefore fancy in a way that hair-streaming-down doesn’t. 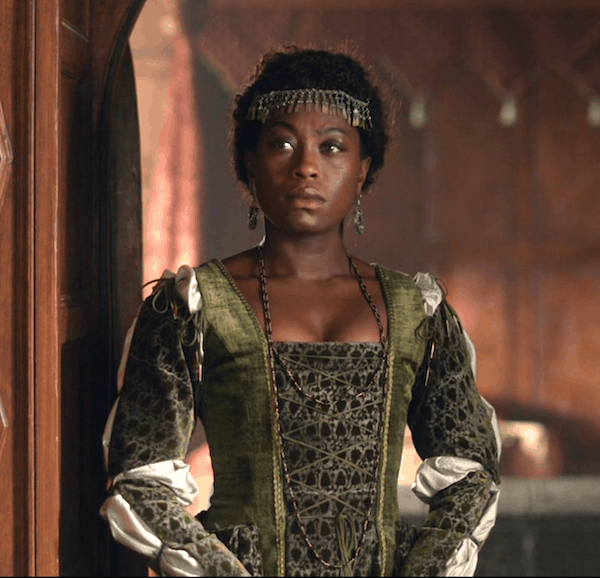 Lina’s dresses may be WTF but they always fit her very well; and she may be queen of head necklaces, but she always manages to look elegant.

Prince Henry and best-bro-friend “Charlie” are playing boules WHILE SHIRTLESS. Margaret Beaufort turns up to try to talk Henry out of wanting to marry Catherine, quoting scripture at him about marrying your brother’s wife is unclean and will mean no children; he quotes back at her the other key biblical quote about how it’s a brother’s duty to marry his dead brother’s wife. 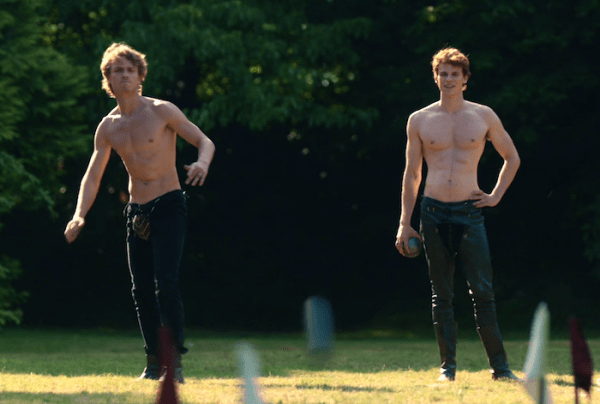 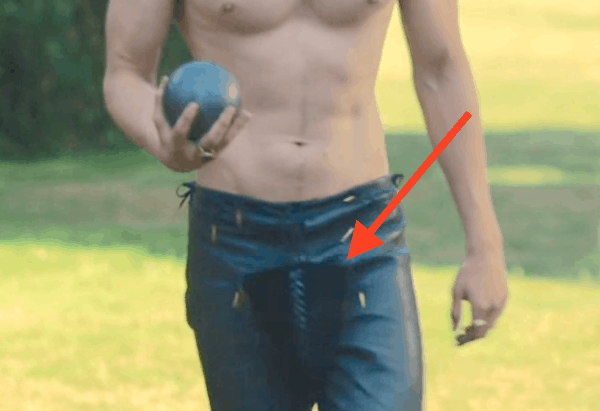 Prince Henry goes to visit King Henry, suddenly all dressed AND WEARING AN ACTUAL HAT. I am pleased! 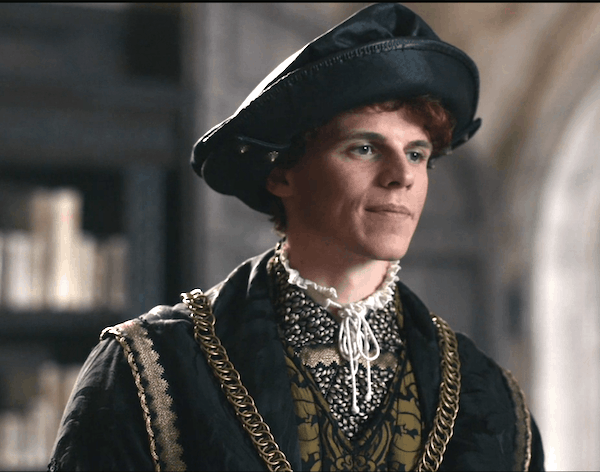 Catherine and her ladies move out. She runs into Princess Margaret, who’s all “yeah how’s that destiny working out for ya?” 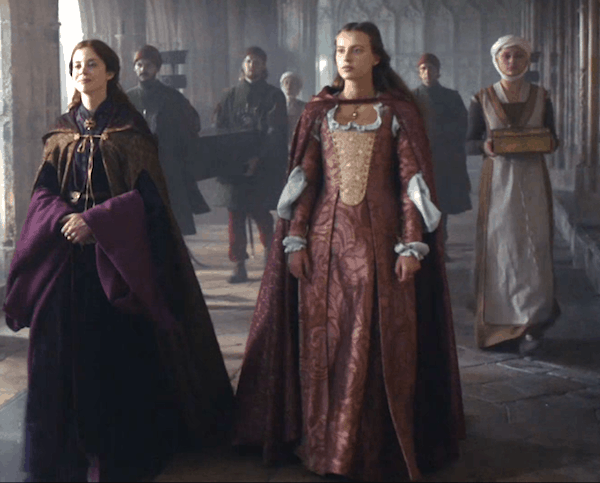 Margaret is starting to look less dumpy, so that’s something. 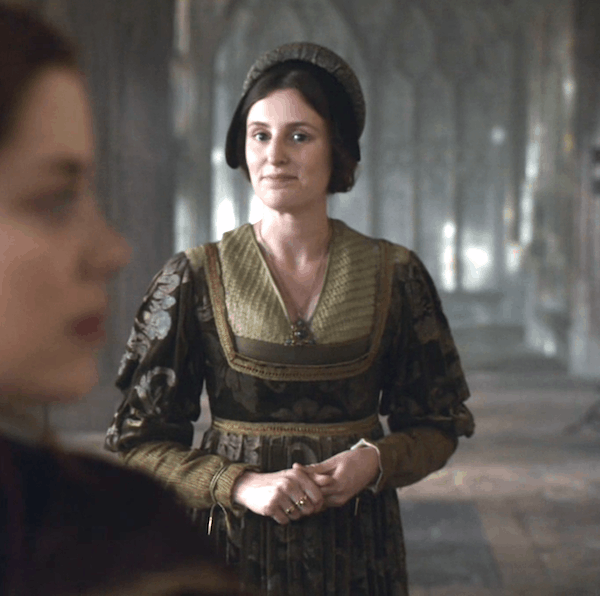 In a high-waisted dress that looks totally random compared to what everyone else is wearing; also, ear flaps? 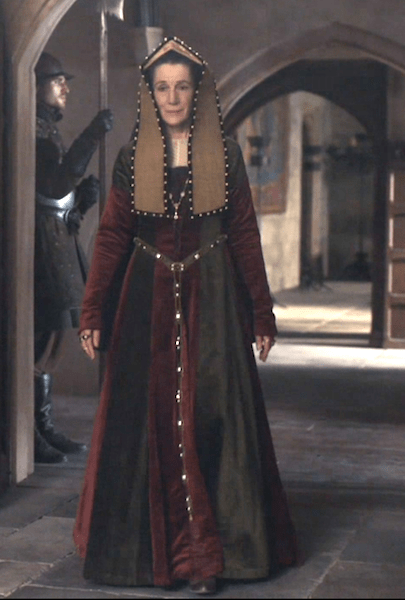 Wait, she’s wearing something reasonably period-accurate! Stop freaking me out! In the closeups, you can see her lower sleeves are even pinned on with gold pins. 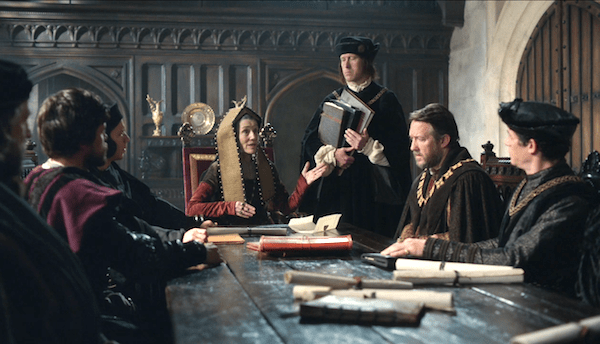 The hatless boys need hats, but otherwise, I am surprisingly pleased with all of this!

Lina scopes out a house in London for Catherine; Oviedo comes with and tries to sweet-talk her into marrying him and getting out of the lady-in-waiting game. Lina feels a duty to her parents and to Catherine.

Catherine moves to her dingy new place. She says she can’t get Prince Henry to advocate on her behalf because he’s in mourning. 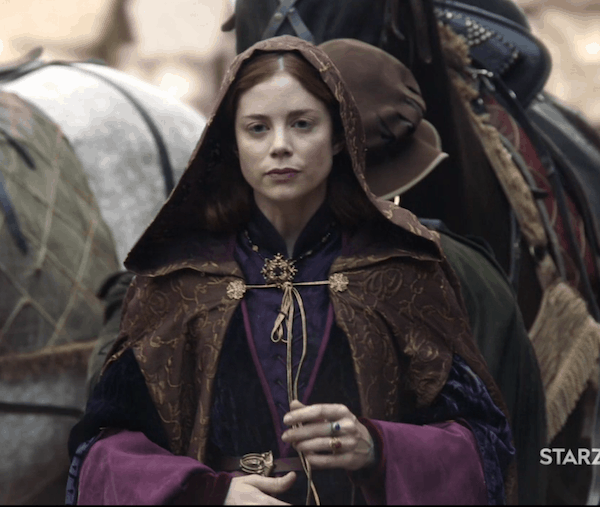 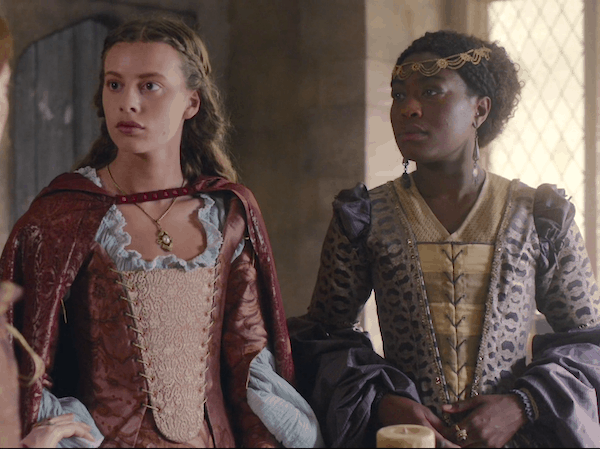 Princess Margaret is being fitted for her wedding dress. The Scottish King wants them to wear matching dresses; she cracks a funny snark about how she hopes he doesn’t always want to make them look like demented twins or something. 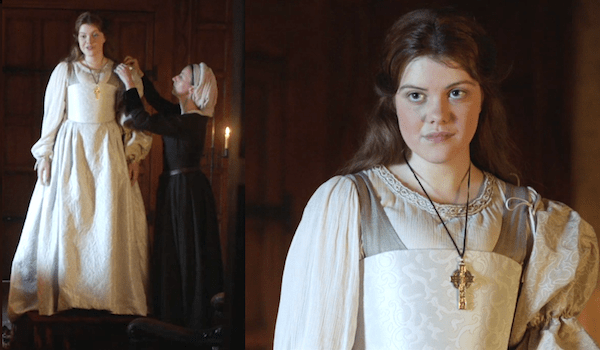 I’m pretty sure those straps are from her stays.

Prince Henry comes to visit Catherine, who doesn’t do herself any favors by being grumpy about her new digs. 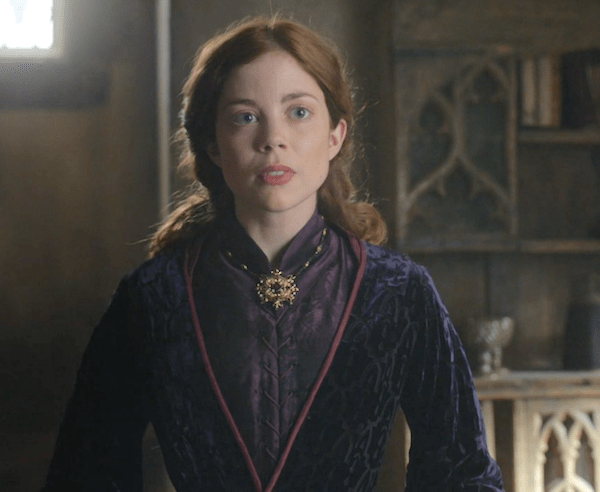 Margaret Beaufort tries to convince Prince Henry that Catherine is a schemer; you can tell she’s getting to him. 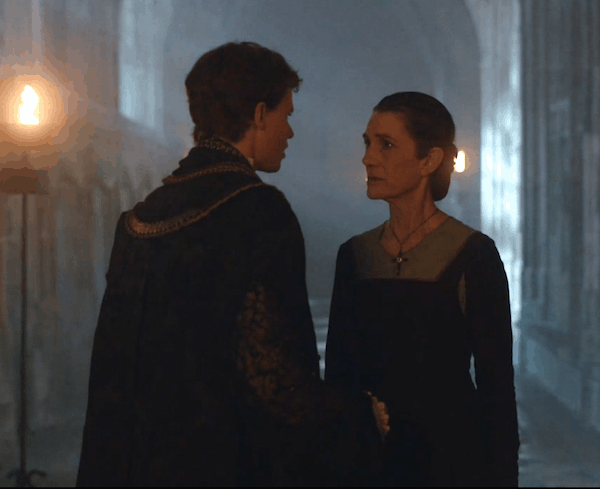 At night, so it makes sense she’s taken off her hood.

Catherine goes out IN THE STREET, FOR A WALK, UNESCORTED. Multiple locals say “bless you princess.” 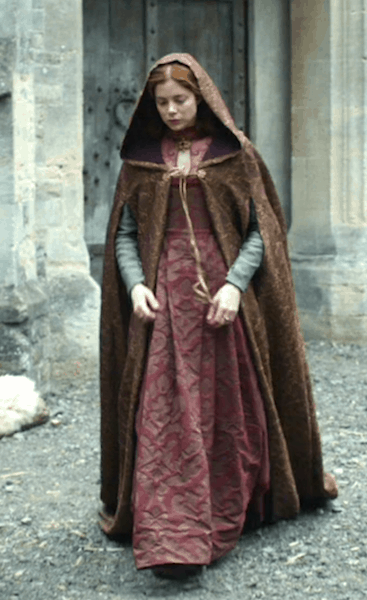 She turns the corner and there’s Prince Henry, who takes her hunting. He gets all cranky and implies she’s trying to manipulate him. 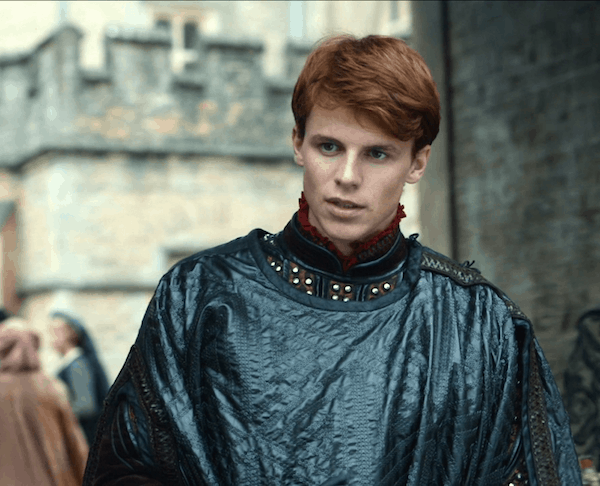 Margaret Beaufort summons “Maggie” Pole to try to get Mags to confirm that Catherine and Arthur had sex. Mags says what she knows, but won’t go so far as to say 100% they had sex, because she wasn’t in the room. Margaret Beaufort throws a shitfit and has Mags banished from all royal residences. Mags gets sent home; en route, her cousin who is leading the anti-Tudor invasion kidnaps her and tries to get her to ally with him; she tells him she just wants to stay neutral and live a quiet life. 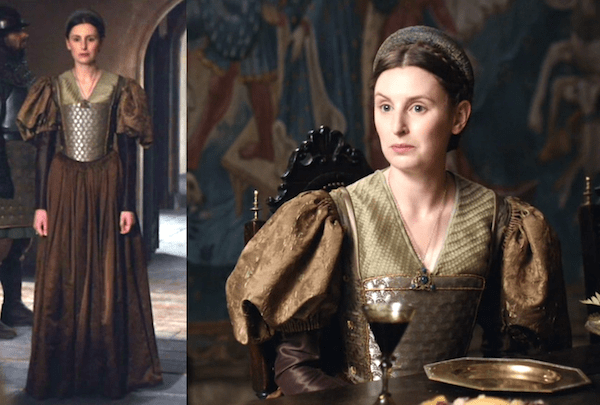 Princess Margaret is ready to head to Scotland; she’s incorporated some of her mother’s wedding dress into her own, and she gives a piece to her father. This brings him out of his stupor, and he suddenly shows up, freshly bathed and well-dressed to see her off. She’s bummed that “Aunt Maggie” isn’t there to say farewell. 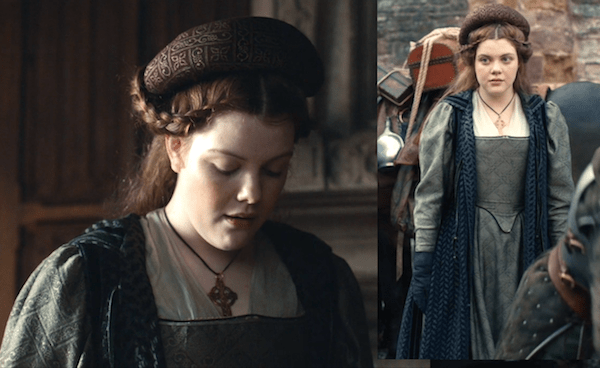 I like the loose gown; don’t love the hair-looped-over-the-roll thing. 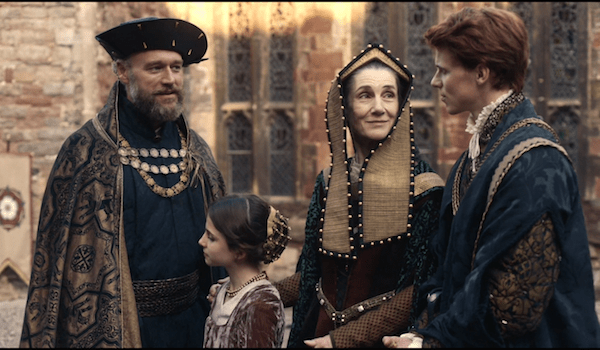 Princess Mary is doomed to live in her One Crushed Velvet Dress.

Not pictured: Oviedo gets conscripted into the English army, where Margaret Beaufort tries to recruit him to spy for her; he’s grumpy at Lina for not agreeing to marry him. Queen Isabella writes to Catherine to tell her to come home, since she doesn’t have a papal dispensation; Catherine throws a tantrum and screams that she WILL be Queen of England!!

King Henry issues an invitation to Catherine to a dinner where he has a big announcement to make; Catherine assumes it’s about her engagement to Prince Henry. Uh, I think you’d be in the know if that was about to happen. Instead, the king announces that his wife’s deathbed request was for him to marry Catherine, and he’s going to do it. Prince Henry flounces out, upset. Catherine’s reaction is mixed. 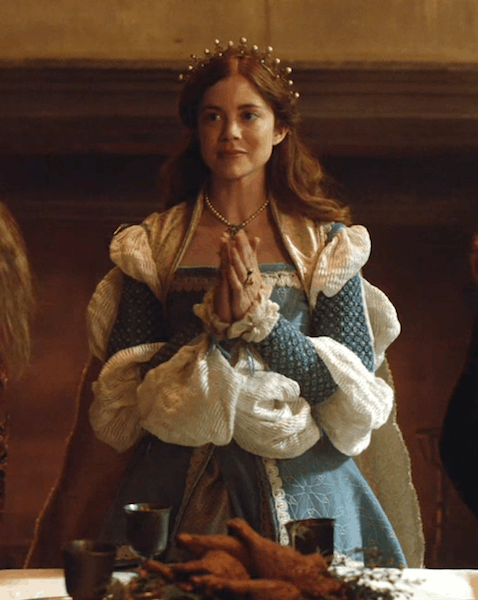 See y’all tomorrow for my recap of episode 5 of The Spanish Princess!