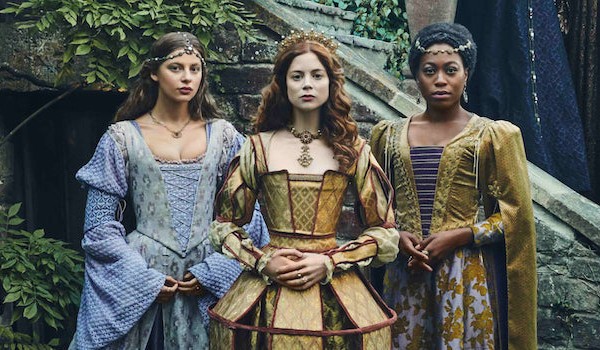 It’s Festivus, aka, The Spanish Princess (2019), Starz’ new adaptation of a Philippa Fucking Gregory book about Catherine of Aragon, has premiered! Strap in for all sorts of historical wtf-ery and some deeply wackjob costuming by Phoebe de Gaye in the second of many recaps. Frock Flicks is a family: if I have to suffer, you have to suffer with me.

Prince Arthur and Catherine spend their wedding night together, and it doesn’t go well. He’s kind of jerky and kind of shy, she’s kind of arrogant and kind of wtf. Both try to school each other. No coitus happens. 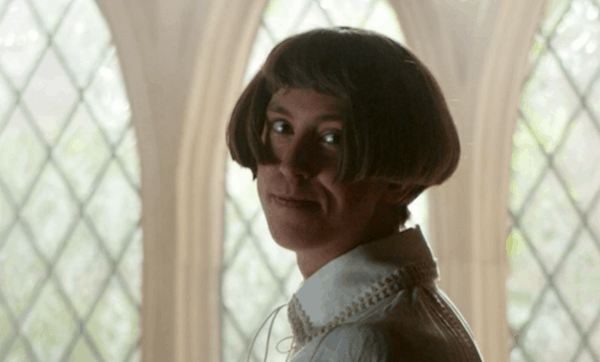 To be clear, I mock Arthur’s hair with love for the fact that it’s closer to historically accurate than most men’s hair seen on screen; and because he looks like Dorothy Hamill.

The next morning, Prince Henry and friends show up at Arthur and Catherine’s door basically teasing Arthur about getting laid. Arthur says his famous “last night I was in Spain” remark (which was really something he was supposed to have said, but it’s always been taken just as it’s played here, as boasting. It was quoted when Henry divorced Catherine as proof of her having had sex with Arthur).

Lina is very conscious of her and Rosa’s positions as Catherine’s ladies-in-waiting. She talks a lot about how they’re going to be married to English men, and tries to rein in Rosa. 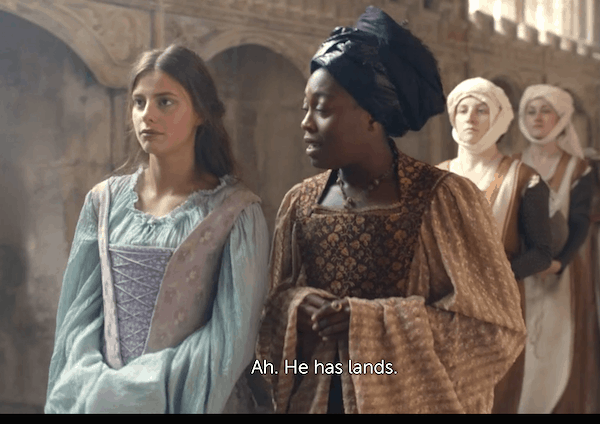 I can’t deal with Rosa’s way-too-long renfaire-Irish-leine shift. I also want a clearer shot of Lina’s overdress, because I feel like it’s more of an apron or smock than a dress? 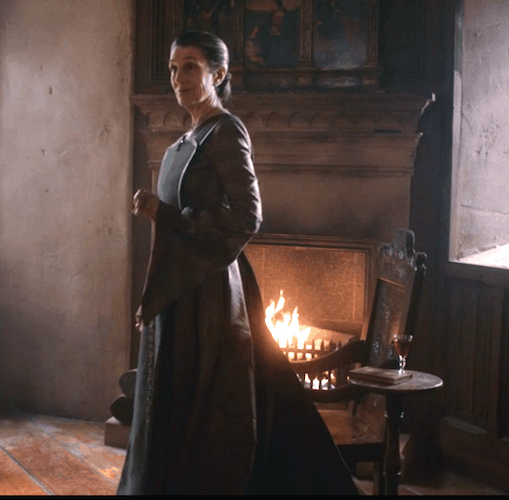 She also wears a kind of smock/aprony thing over her gown. Is she about to do some welding?

There’s an event based around John of Gaunt, Catherine and Arthur’s common ancestor, in celebration of the wedding. King Henry makes some speeches. 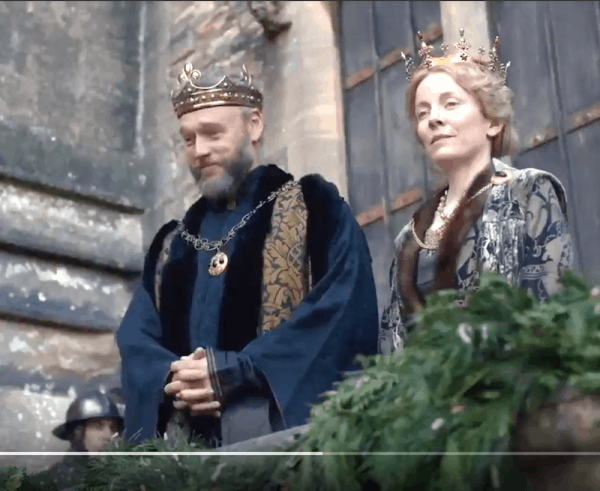 Catherine and Arthur don’t appear to be having fun. 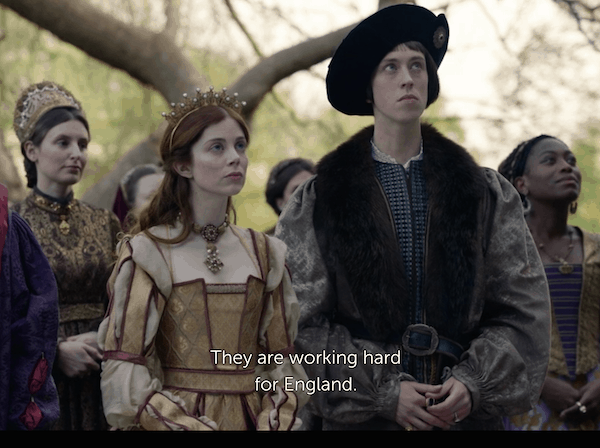 Catherine’s lower sleeves are clearly only attached in back, if at all, so they hang super low on her arm. She also wears a very Aliexpress headband tiara. 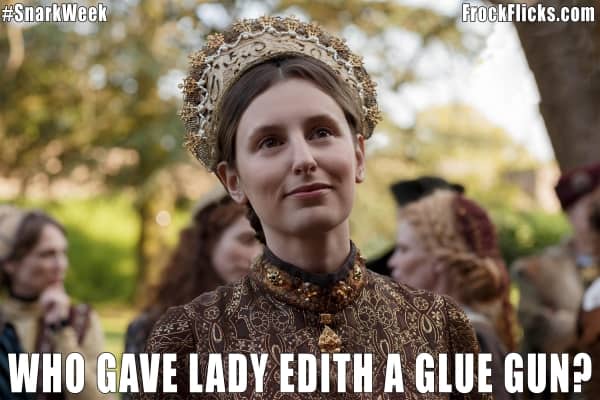 Mags Pole wears yet another sticky-uppy French hood and a dress that just looks like a printed Christmas calico. 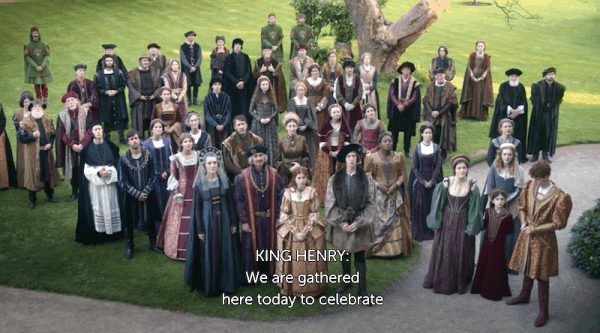 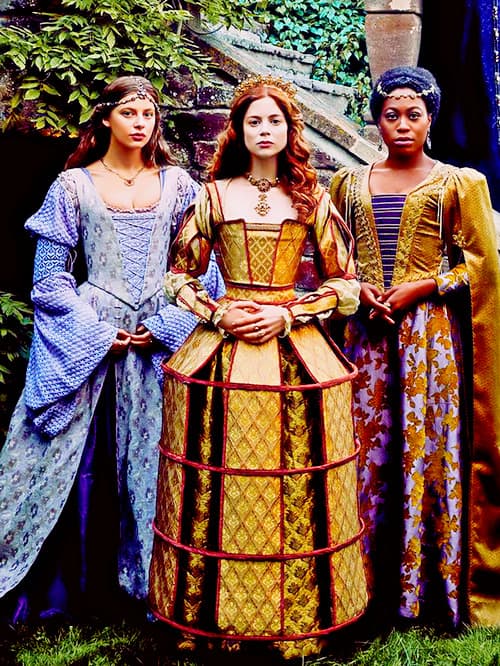 There’s some stupidity about dancing: Arthur tells Catherine they’re going to have to dance, she suggests a pavane, he says it has to be an English dance (the pavane was originally French), a galliard (which is originally Italian) is called, Catherine doesn’t know how to dance it, Mags Pole tips her off that it’s basically a pavane. FFS. 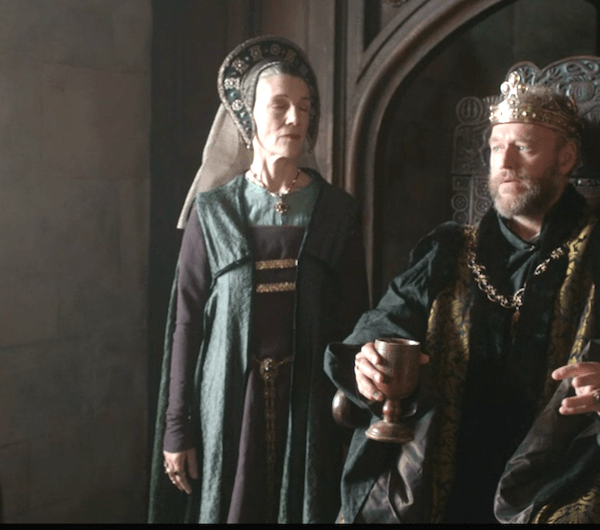 Henry watchdogs Catherine like nobody’s business, and Princess Margaret teases him for it. 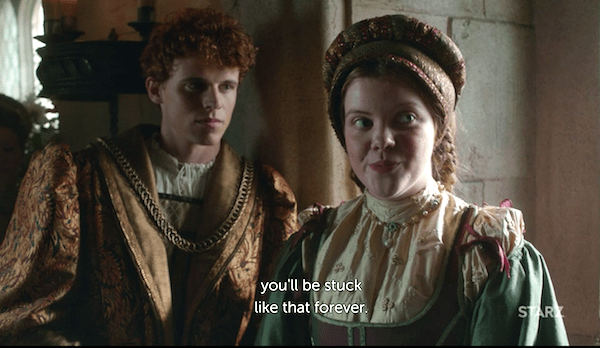 We’ll come back to her dress in a second.

MIDWAY THROUGH THE DANCE, WITHOUT WARNING, CATHERINE FOLLOWS “MAGGIE” POLE OUT INTO THE HALLWAY. PARTNERED DANCES REQUIRE PARTNERS. YOU CAN’T JUST WALK OUT.

Catherine apologizes to Mags for her brother’s execution and asks her pardon. Mags softens but is still upset. 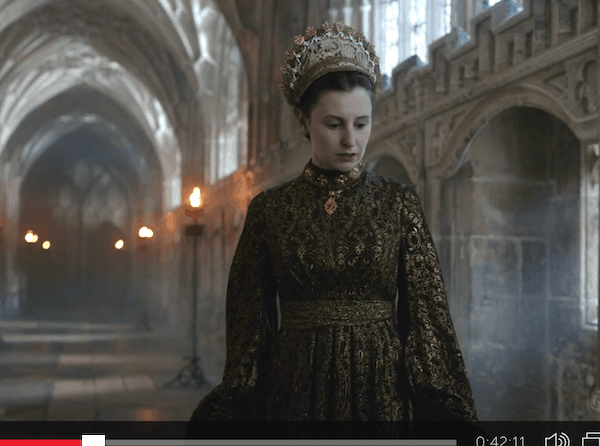 Catherine wanders back into the hall just in time for Prince Henry to pick her up and spin her. Arthur is pissy about it later.

A Scottish delegation shows up. Catherine is incredibly unregally, publicly rude to them because they’re Protestant, a rudeness that would go against her entire upbringing. 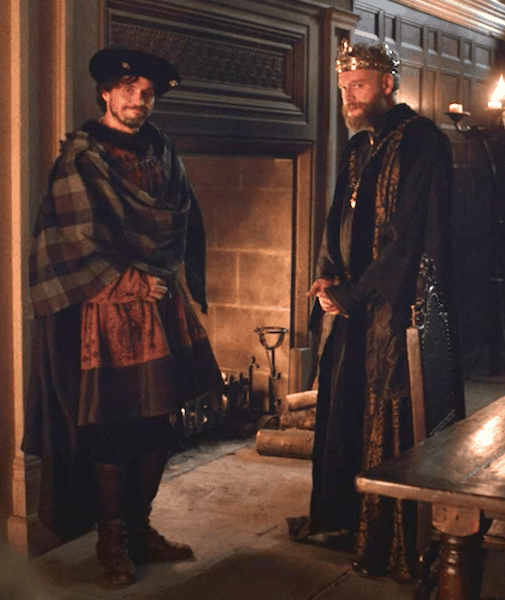 The Scottish guy is wearing plaid and a skirty thing, but not a kilt, which is impressive! Kilts as we think of them being more 18th century.

Princess Margaret is brought in by her Grams; Dad announces she’s going to marry the Scottish king; Margaret is upset, since he’s 1. Scottish and 2. old. All of this happening in front of the Scottish ambassador. Dude, MARRIAGE TREATIES WERE COMPLEX OPERATIONS. THEY WERE NOT SUDDEN IDEAS. Margaret would have been informed of her impending marriage IN PRIVATE, not in front of strangers. 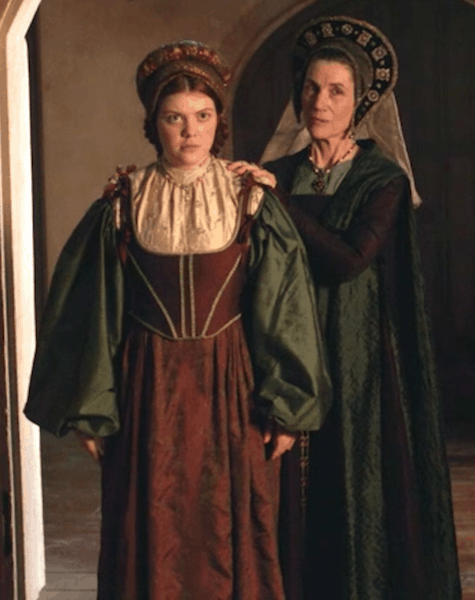 Margaret gets the short end of the stick, costume-wise. It just looks dumpy, and like something you’d make from acetate taffeta because you wanted to be a princess, but only had access to Simplicity renfaire maiden patterns. The actress playing Margaret looks a lot like the young portrait of Catherine of Aragon, btw.

Catherine and Arthur are being sent off to Ludlow Castle in Wales so they can start learning how to rule. Margaret complains to Catherine about having to marry the Scottish king; Catherine basically tells her to make her own destiny. 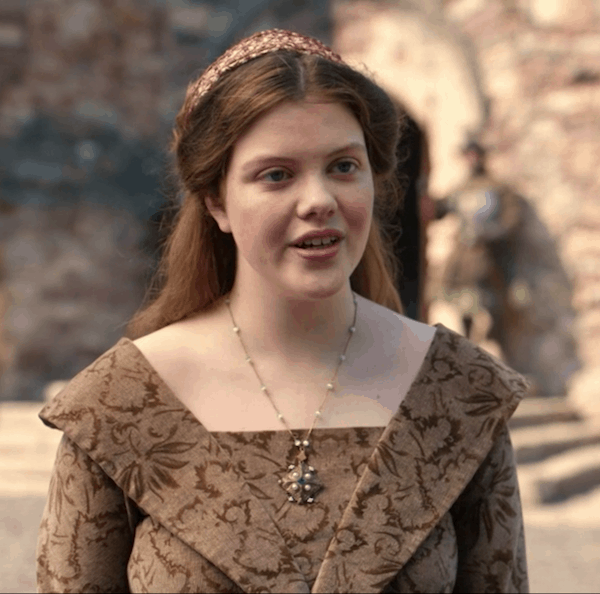 More dumpy on poor Margaret. Could they not spring for some kind of bust support? 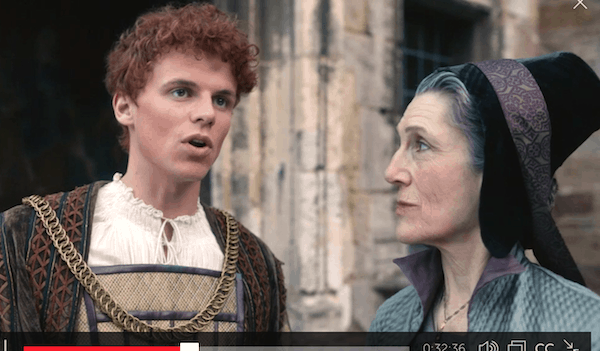 Everyone is assembled to send off the couple. 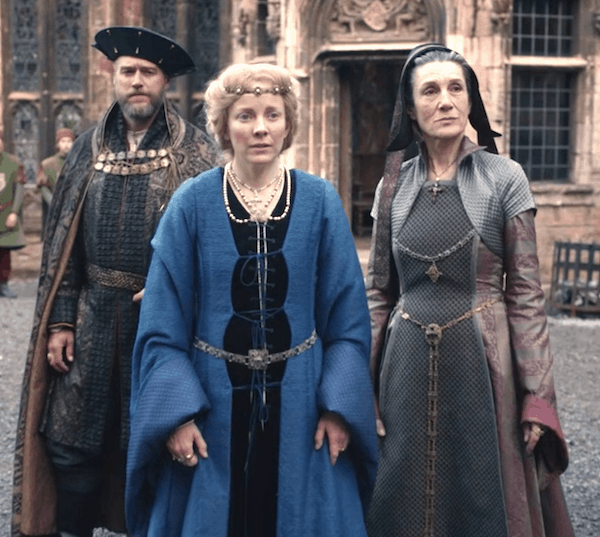 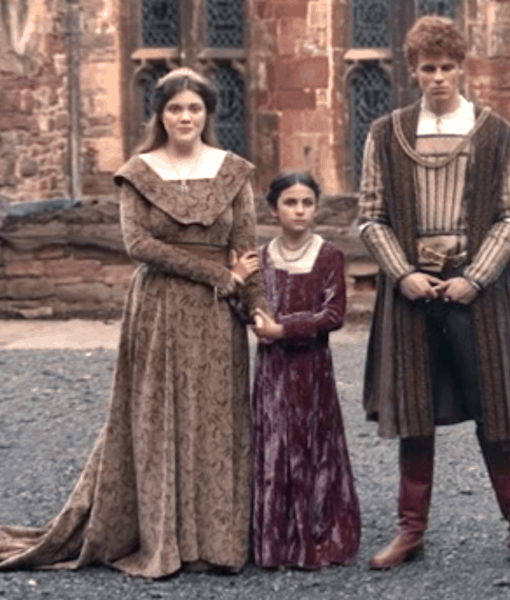 “Maggie” Pole and hubby accompany Arthur and Catherine to Ludlow. She and Arthur have a heart-to-heart about her brother and the fact that Catherine is trying. Both are clearly softening on Catherine. Arthur calls her “Aunt Maggie” and I throw up a little. 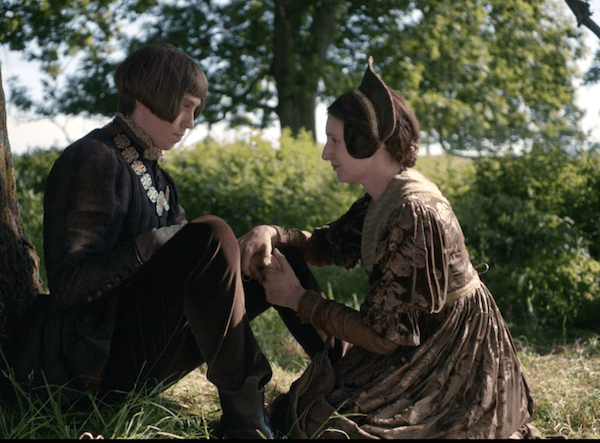 Arthur and Catherine have a fireside heart-to-heart, where she tells him she respects Islam. Okay, so yes, Islam had a definite influence on Spain, but she never would have thought of it that way. Arthur is turned on. 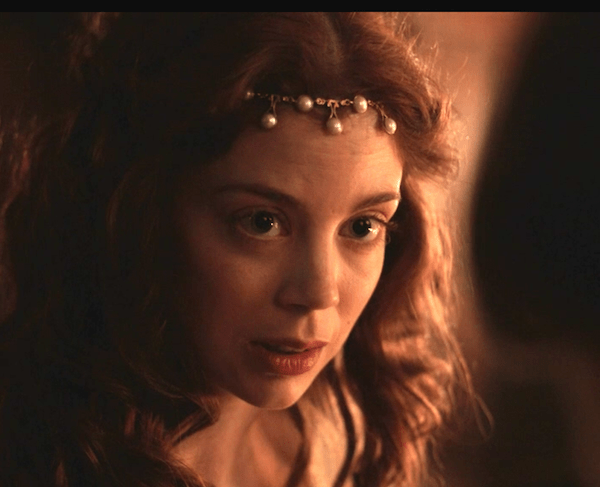 Luring you in with anachronistic religious tolerance and head necklaces. 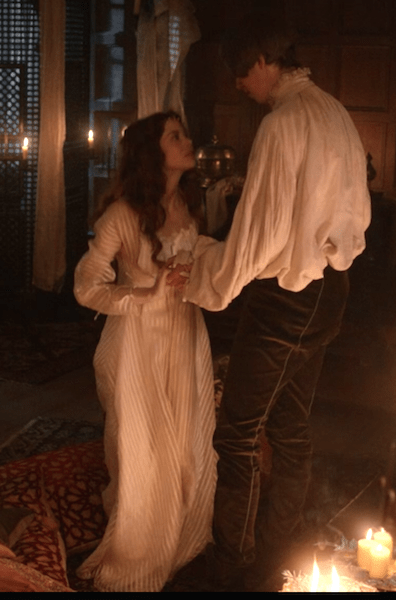 Arthur and Catherine GET IT ON. Definite coitus/penetration occurs! They even lounge in bed and read poetry to each other and talk about the standard trope of recreating King Arthur and the round table.

Princess Margaret informs her grandmother that she shouldn’t be married to the Scottish king because the Scots have been there for months and all they do is drink and carouse. Grandma Beaufort basically says “suck it up,” although it’s nice that they throw in a reference to her patronage of printers. 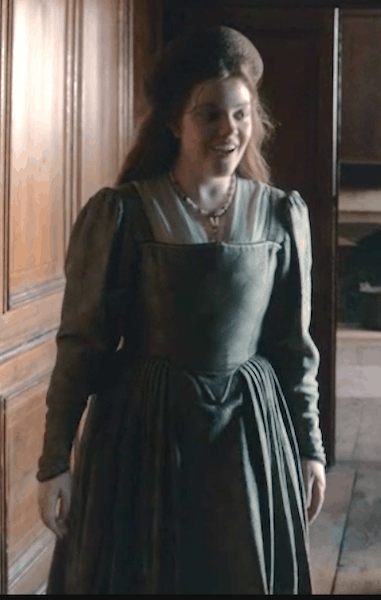 Arthur and Catherine are shmoopy! Rosa fucks her married Lord Stafford up against a wall. Lina lectures Rosa some more, but Rosa informs her she’s a (slur word for Romani) insert hair toss and her people marry for LOVE and DESIRE! 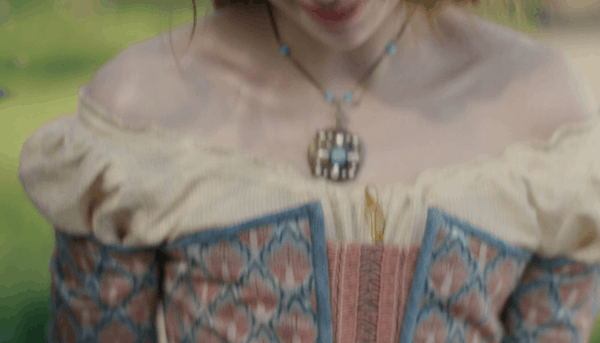 I think to indicate that they’re all casual and intimate and private, Catherine wears this very Ikat-couch-cover gown without an undergown and her chemise off the shoulders. 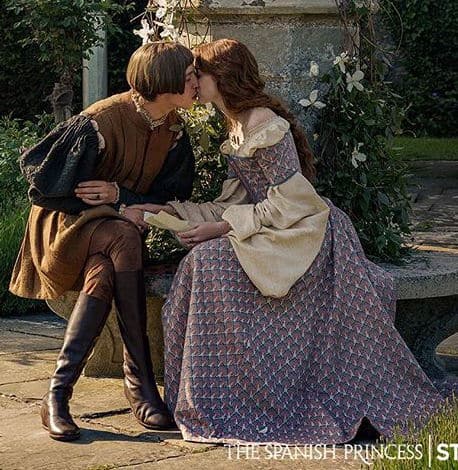 What you don’t really see well on screen.

The sweating sickness has broken out (if you haven’t ever, that’s a fun one to read up on, mostly because we still don’t know what the disease actually was!). First Lina gets sick, then Arthur. 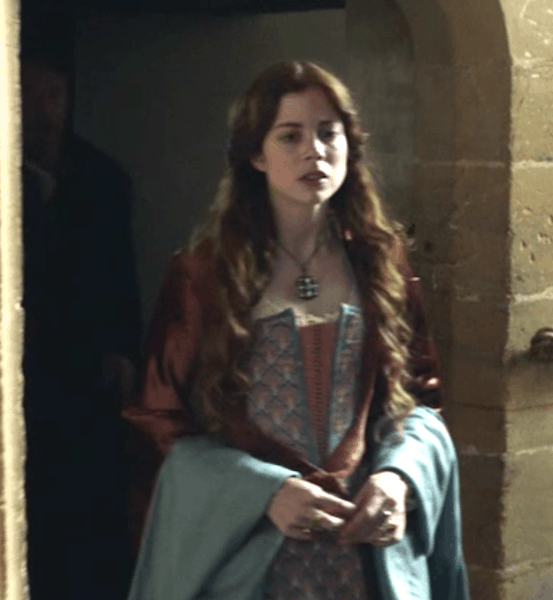 Here’s that same Ikat-y dress, now worn as an overgown and so less annoying.

Lina survives because Oviedo cares for her… in the barn. I have no idea. 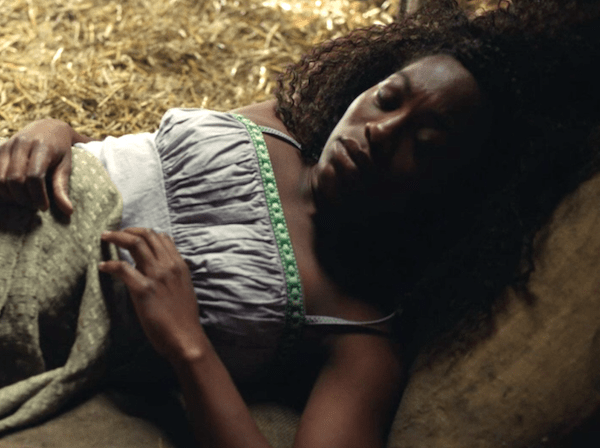 She’s wearing some kind of hippie smock under her dress.

Arthur does not make it; Catherine pushes her way to his bedside before he dies; he tells her she’ll likely be sent back to Spain. King Henry and Queen Elizabeth rush to Ludlow, but he’s dead by the time they show up. They are distraught. 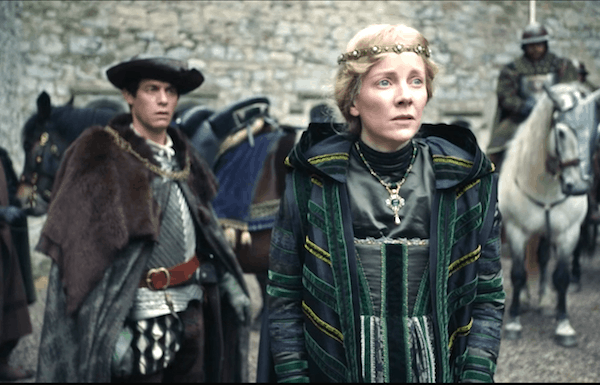 Elizabeth wears this velvet-ribbon-applique’d ensemble for the rest of the episode, from dead-son through return-to-London-for-the-funeral.

Catherine is sad at the funeral. Lots of ominous stuff is said, most importantly, Queen Elizabeth who says about her, “I don’t care what happens to her.” 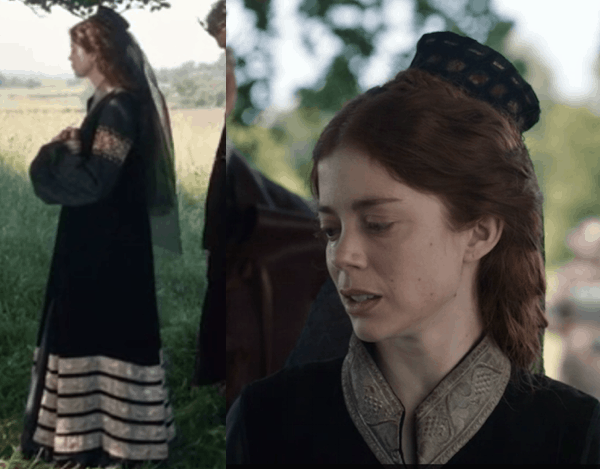 Wearing a special mourning bun cover? The sleeves are very Lord of the Rings, but I like the antique 18th century trim.

Princess Margaret’s wedding had been put on hold, but now that Arthur is dead and the Spanish alliance is off, the Scottish alliance is back on. Catherine is told she has to wait to see if she’s pregnant.