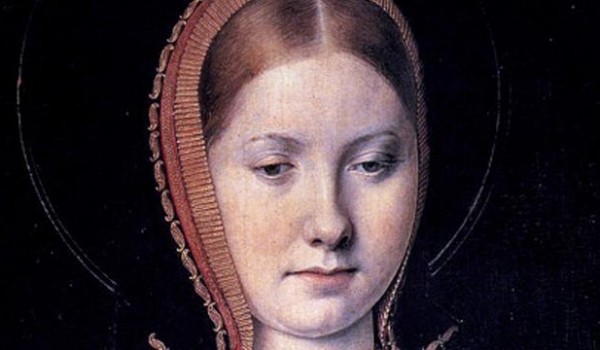 Guys, there’s a new Starz miniseries in the works based on yet another Philippa fucking Gregory book. We’ve had The White Queen and The White Princess. This time, it’s The Spanish Princess, based on the book The Constant Princess and telling the highly fictionalized story of Catherine of Aragon’s first marriage to Henry VIII’s older brother, Arthur, Prince of Wales. Y’all know I loves me some Catherine of Aragon. So this time, Starz, it’s personal.

There’s not much info out yet about the production, except for casting and initial TV studio BS. Charlotte Hope (Myranda on Game of Thrones, Charlotte Mellendorf on The Musketeers) will play Catherine, Angus Imrie is Arthur, Laura Carmichael (Edith on Downton Abbey) plays Margaret “Maggie” (UGH RETCH) Pole (note there is also a “Meg” — Margaret — Tudor for full nausea inducement), and Harriet Walter (Fanny Dashwood in Sense and Sensibility) as Margaret Beaufort. No costume designer has been announced, sadly.

However, thanks to the magic of the internets, we do have a visual on the show! The production filmed Catherine and Arthur’s wedding (and what looks like Arthur’s funeral cortege) at Wells Cathedral in Somerset, England, and some kind soul caught the actors leaving the cathedral on video. None of the images are clear, but I screencapped a bunch, and let’s discuss!

Now, my first thought when I saw Catherine was “WHAT THE FROCK.” My second thought was “Oh my god they got that she had auburn hair!” And then I went back to “WHAT IS SHE WEARING OMG INSERT FORK IN EYE.” Because this looks nothing like early Tudor dress: 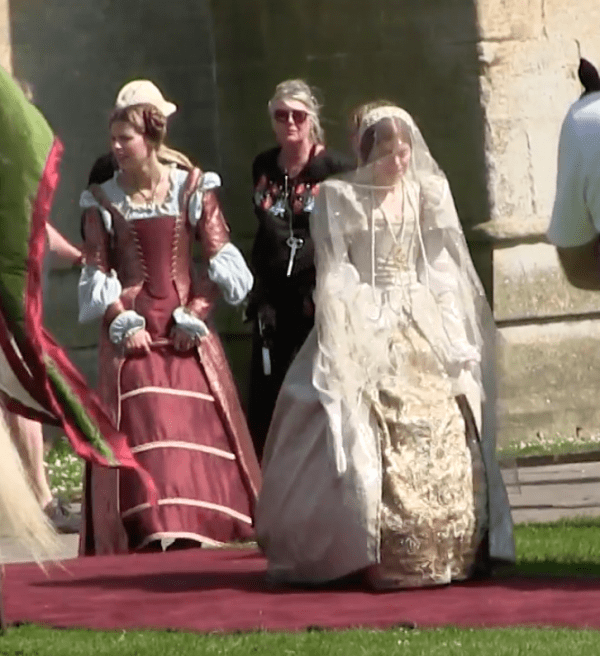 Catherine and an attendant. 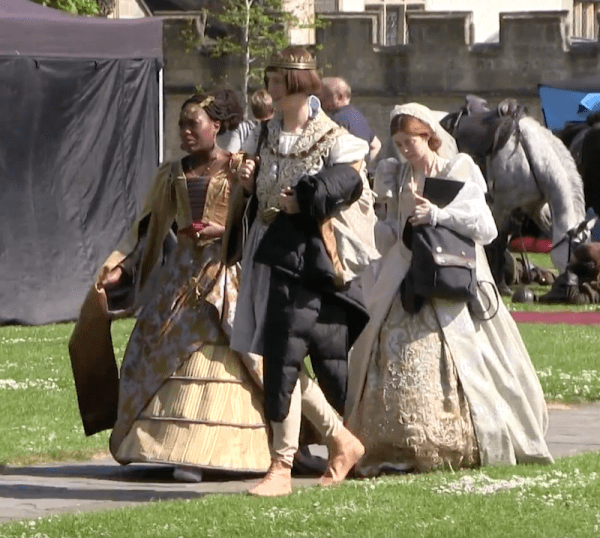 An attendant, Prince Arthur, and Catherine

All I could see was: 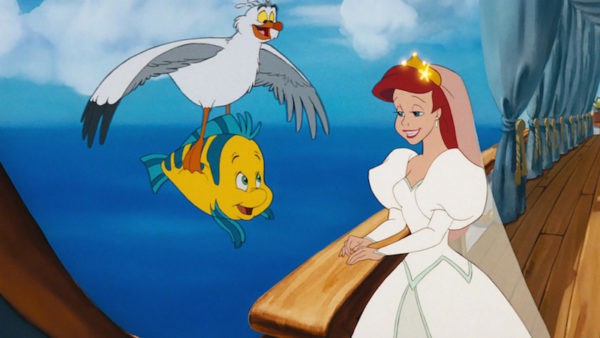 Instead of what I thought I SHOULD see — namely, very early 16th-century English Tudor dress:

Luckily, I pinged some early 16th-century experts — Kate Newton aka Beatriz Aluares, who knows her Spanish costuming and weighed in on 1492; Stefanie Pursell; and Kimiko Small, who knows a ton about English costume of this era — and they talked me down off the ledge. Apparently the costume designers WEREN’T totally smoking crack, and they helped me find period sources for much of these ensembles.

First, let’s talk The Wedding Dress. According to Ruth Mathilda Anderson’s Hispanic Costume 1480-1530, Catherine WAS dressed in Spanish style clothing for her wedding, and specifically wore white, as did Arthur:

“For the marriage ceremony… both bride and bridegroom wore white satin. Certain details of Catherine’s dress marked ‘the straunge dyvrsitie of rayement of the countreth of HIspayne.’ Her coif or rather veil on that day, of white silk bordered with an inch-and-a-half band of gold, pearls, and precious stones, covered much of her face and also of her body down to the waistline: ‘her gowne very large, bothe the slevys and also the body, with many plights, moch litche unto menys clothyng: And after the same forme the remnnt of the ladies of Hispayne were arayed.’ Their skirts carried hoops in the Spanish style” (Ruth Mathilda Anderson, Hispanic Costume 1480-1530, 1979, pg. 143). 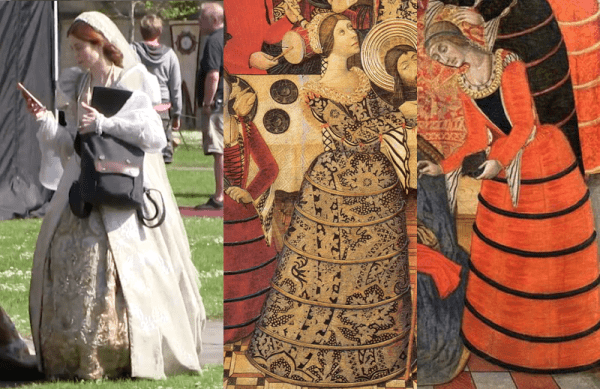 Okay, so hoops (farthingales or verdugados) did come into fashion in Spain first, as shown by these two Spanish women. The silhouette was a bit more cone-like, and the hoops were exposed (the casings were sewn to the fashion fabric skirt), but this passes. Middle: Pedro García de Benabarre, Retable of St. John the Baptist, 1470-1480, Museum of Catalan Art. Right: “La nascita del Battista” di Pere Garcia de Benavarri, realizzata per la chiesa di san Giovanni a Lleida, before 1483. 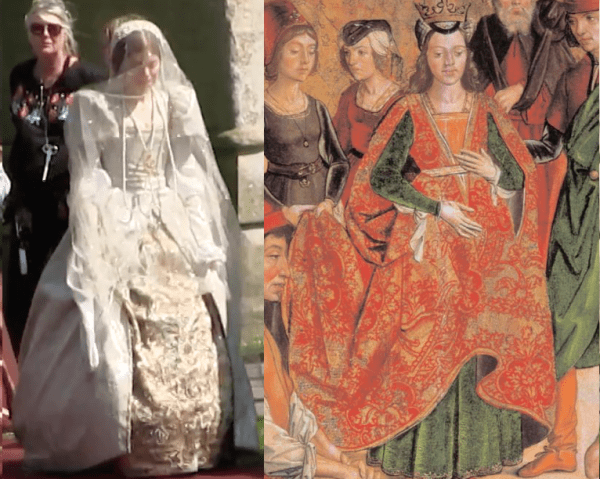 What I’m not seeing are any split overskirts. Either it’s those hooped skirts as seen above, or something like this where an overskirt or gown is pulled up a bit in front. Pedro Berruguete, La verificación de la cruz de Cristo, c. 1470, Museo de la Parroquia de Santa Eulalia, Paredes de Nava.

The sleeves killed me at first, because WTF WITH THE LITTLE MERMAID PUFFED SLEEVES KILL KILL. Most Spanish sleeves looked like this:

Either sort of poufy but fitted towards the wrist, long with turn backs like you see in early 16th-c. English fashion, or what seems to be most typical, the two on the right: a fitted sleeve that is slashed on the underside and/or sectioned, with a wide-sleeved chemise hanging out at the wrist. 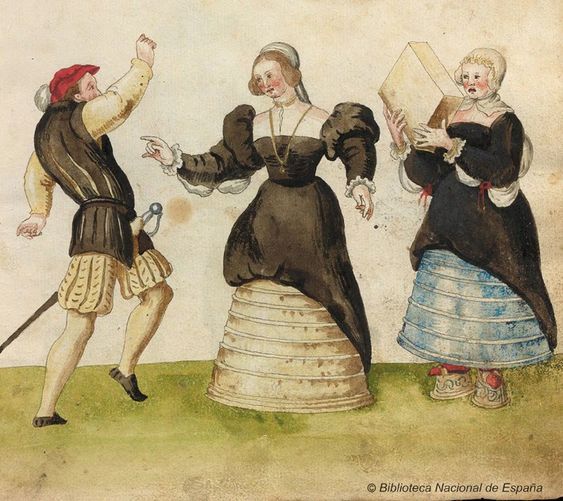 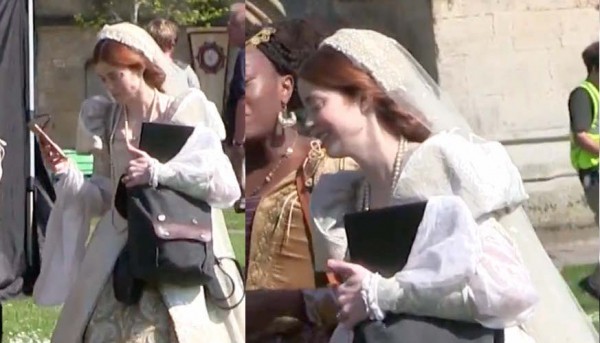 And peered more closely, and saw that they’ve got a (bad) attempt at the wide chemise there at the wrist. Granted, they’ve sewn it shut and added a wrist ruff, which, no. But still. You win this time Starz. I DON’T LIKE IT. But I won’t set it on fire.

Now, I am THRILLED that they’re showing Catherine with auburn hair. And it’s UP!! But then I started worrying that whatever weird fabric-y thing is hanging down in back was actually hair left loose. 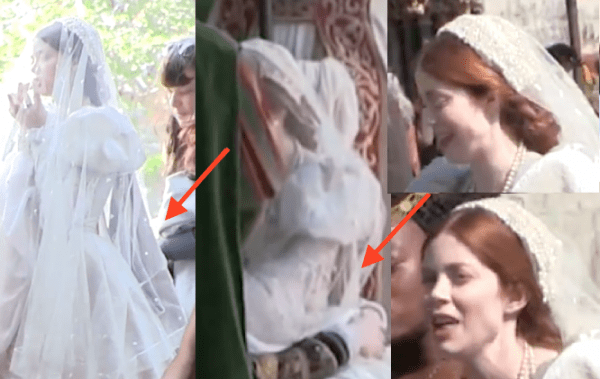 But squinting more at these, I think that’s fabric, not hair? Right? RIGHT? 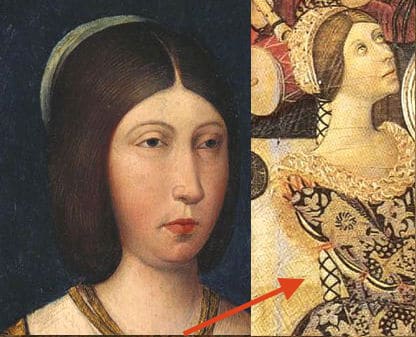 In general, hairstyles of this era were center parted and long and low over the ears, like on the left, but you also see wrapped long braids like on the right. Left: attributed to Antonio Inglés, Isabella I of Spain, Queen of Castille, ca. 1489, UK Royal Collection. Right: Pedro García de Benabarre, Retable of St. John the Baptist, 1470-1480, Museum of Catalan Art.

And while that beaded headband thingie can kind of pass as the kind of cap seen above with the wrapped braid, I really think she should be in a proper hood:

On to everyone else: 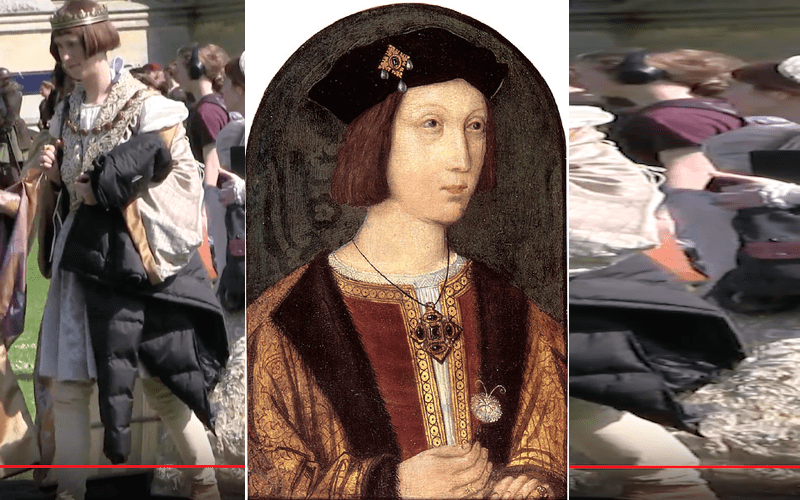 But Kimiko notes: “Of course, all the men are wearing boots. Even the Prince has on short boots, not shoes.” She also adds, “Looking again at Arthur, I seriously question wtf the highly decorated V shaped thing over his chest actually is. It should be a fur lined gown turnback, like the lapel of a coat. Instead they blinged it out in something more than damask, as the texture stands out more than the blinged out forepart young Katherine is wearing. And what is with his standing collar? It’s not a part of his round necked gathered shirt. Like some tiny underpropper lost in time from the Elizabethan ruff era.” 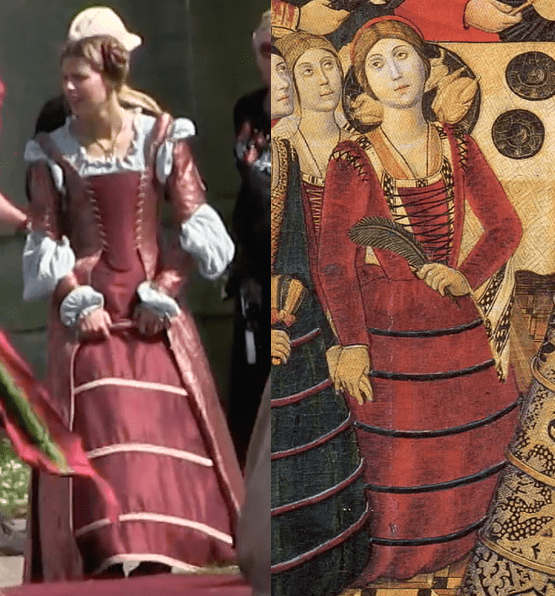 Attendant number one is pretty close to this Spanish woman from Pedro García de Benabarre, Retable of St. John the Baptist, 1470-1480, Museum of Catalan Art. Lose the split overskirt. Of the Princess Leia buns, Kate says, “Yeah no.” 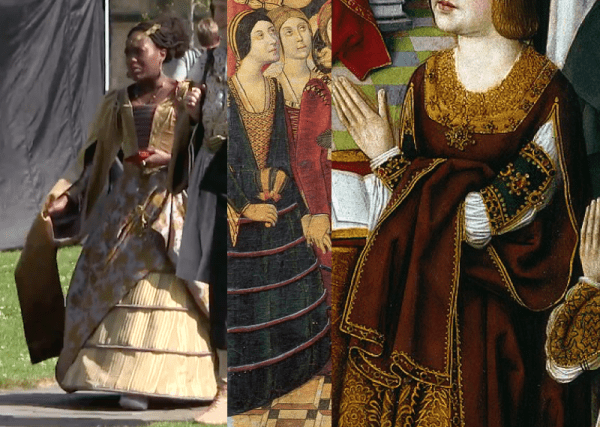 Gentlewoman #2 is obviously one of the African/Moorish attendants that were part of Catherine’s retinue. I got irritated by her crazy long sleeves, but then my experts pointed out paintings like this one of Isabella of Castile. Okay, okay. Fernando Gallego, Madonna of the Catholic Monarchs, 1490-95. 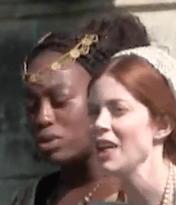 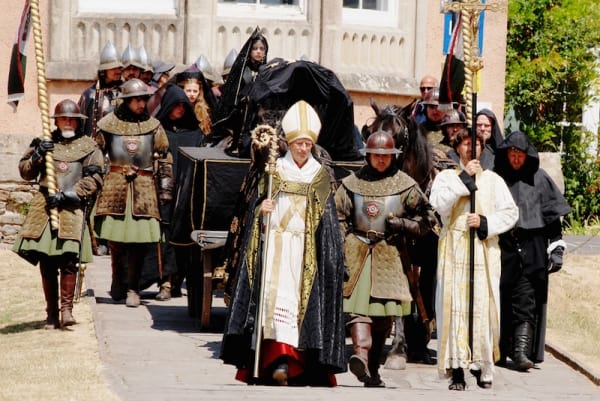 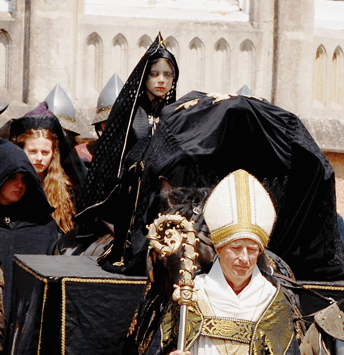 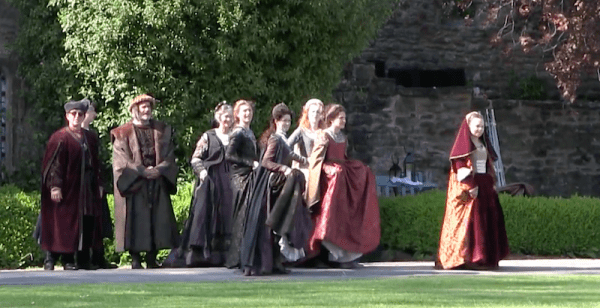 Extras. Kate says, “Some of the older women are wearing sleeveless habitos over their gowns. That was one of Isabella’s favorite garments, so makes sense older women might still be wearing it.” 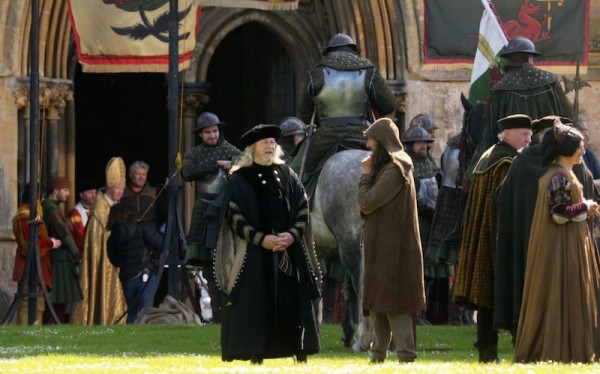 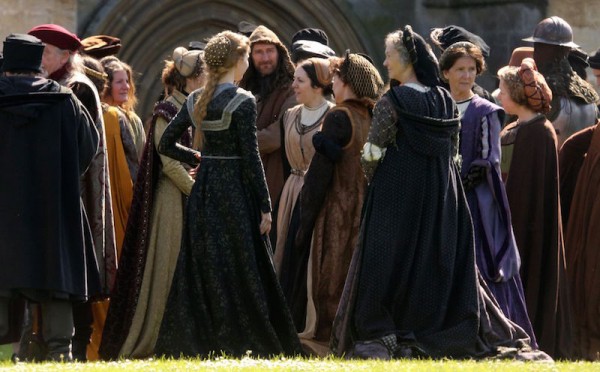 How do you feel about The Spanish Princess’ costumes so far?