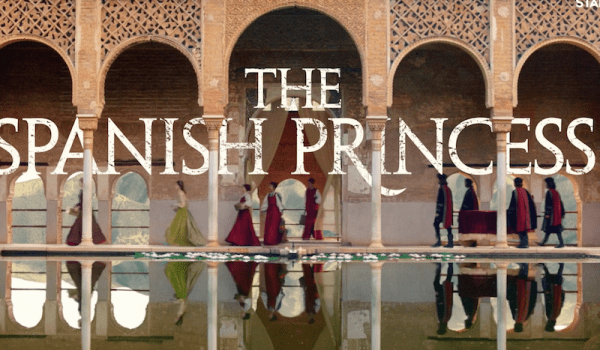 Catherine of Aragon. Henry VIII. Philippa Fucking Gregory. So there I am, innocently firing up Starz.com to watch the current season of Outlander, when this happens:

We’ve posted already about the tiny glimpse of The Spanish Princess‘ (2019) costumes — Catherine’s wedding dress — and we were kind. Maybe too kind. Well, now we’ve got a few more glimpses of the costumes in this video, along with one still, and we appear to be back in WTFrock land!

This is an adaptation of yet another Philippa Fucking Gregory book — author of The Other Boleyn Girl, and, as Starz is pleased to inform you, their productions of The White Queen and The White Princess. As we all know, Philippa Fucking Gregory, despite being somehow perceived as an expert in her subjects, LOVES to play fast and loose with the real characters and motivations in history. Sure, she hits the major plot points, but most of her characters seem to be written VERY differently from what we know of them historically. See this book (The Constant Princess), in which Catherine of Aragon and her first husband, Arthur, Prince of Wales, are deeply in love and deeply shagadelic before he suddenly dies (sorry, no spoilers in history). When pretty much ALL historians agree that they barely knew each other and never shagged (Catherine, deeply religious, swore to her dying day that they never had sex).

Now, Catherine of Aragon is a fascinating character, and YES, her early years are riveting and usually skipped in favor of portraying her as the dried-up-old-husk about-to-be-put-aside aging wife of Henry VIII. So I’m not complaining that someone is telling the story of her early years! Just, as we frequently complain, THE REAL HISTORY IS INTERESTING ENOUGH ON ITS OWN. Ya don’t NEED to make shit up. Catherine was a princess of Spain! Sent to marry the English heir! Who dies early and suddenly! Then she’s left to fend for herself for years while her father (Ferdinand of Aragon) and father-in-law (Henry VII) are idiots! Then Henry VIII comes to the throne and marries her! They’re in love! She’s badass and fills in for him as England goes to war with Scotland, while Henry is in France! YA DON’T NEED TO MAKE THIS SHIT UP, PEOPLE.

On to the sneak peek of the costumes. According to Drama Quarterly, Phoebe de Gaye, who designed the costumes for The White Princess, returns as costume designer for The Spanish Princess. Oh dear.

First, the first official still of actress Charlotte Hope as Catherine. Yay, auburn hair! One of our biggest complaints is the fact that Catherine is usually portrayed as dark haired and sallow, to fit the stereotypical “Spanish!” image, instead of what she actually looked like. However: 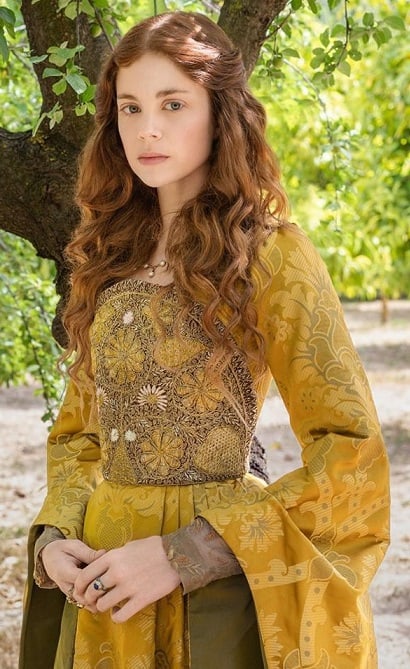 Clearly hairpin rationing continues. More importantly… Okay, the fabric is good for the era, and I like the cut of the sleeves. But the skirt is pleated weirdly, and I’m totally confused by the Indian embroidery panel used as a bodice.

Now, on to the teaser trailer: 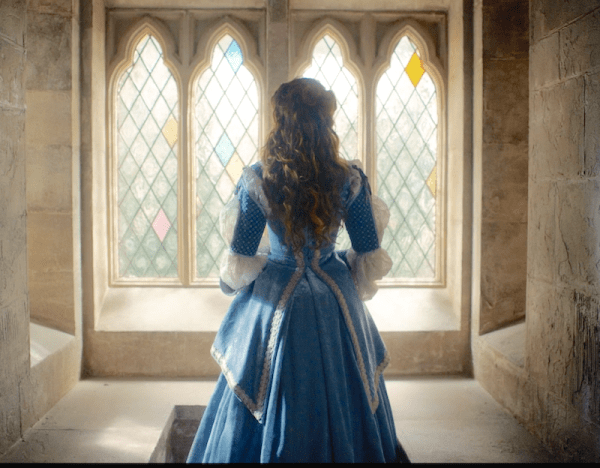 WHAT THE FUCK IS THIS OH MY GOD. Laced-on sleeves, with puffs at the elbow – okay. But why is the “gown” only tunic-length, and WHY does it open up like that in back??? 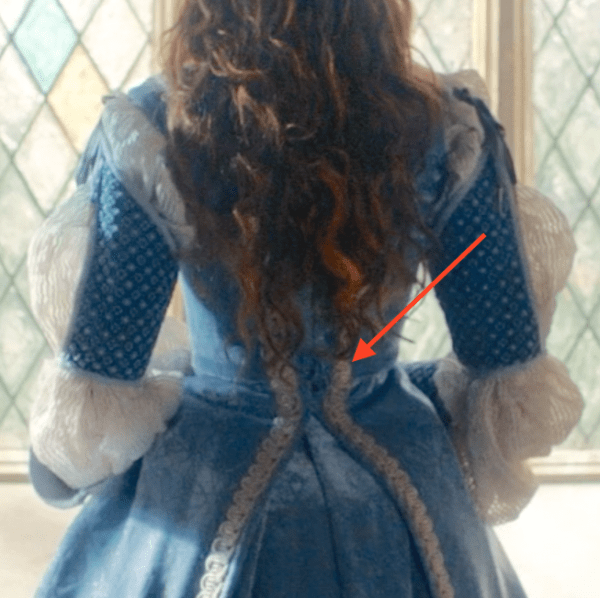 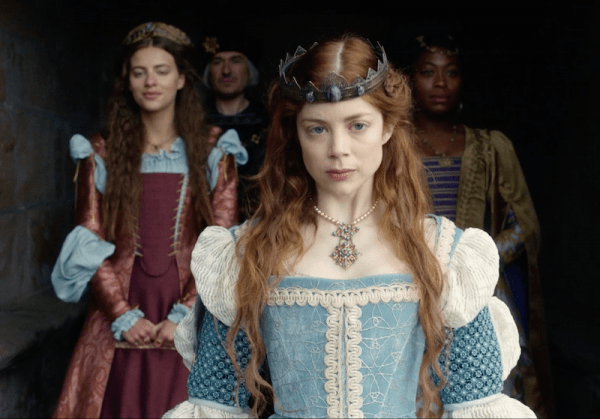 NOT BETTER FROM THE FRONT. Apparently there was a sale on upholstery trim at Joann’s, and what’s with the drunken/saucy angle on the crown? There’s that red/pink dress that’s actually a decent copy from a contemporary portrait. 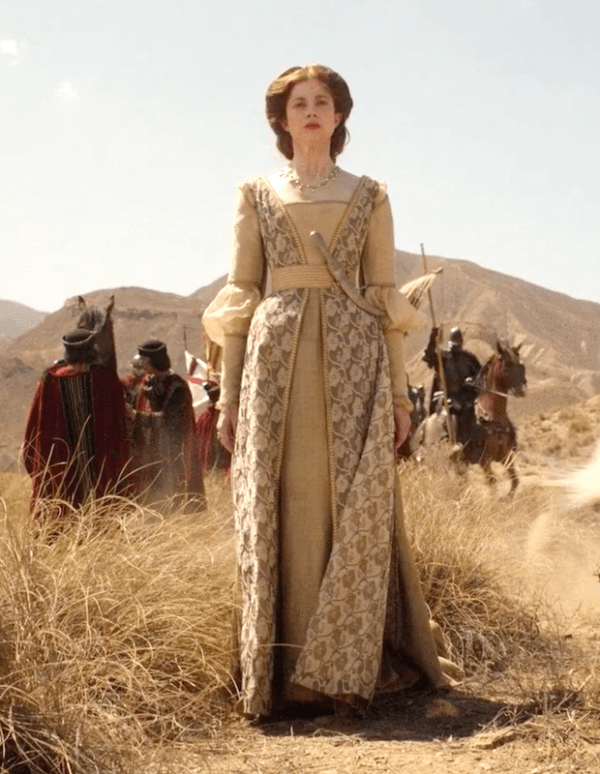 Um, did Catherine have a badass superhero period back in Spain that has so far gone undocumented? The dress is fine and the hair is up, thank you. The scimitar, not so much. 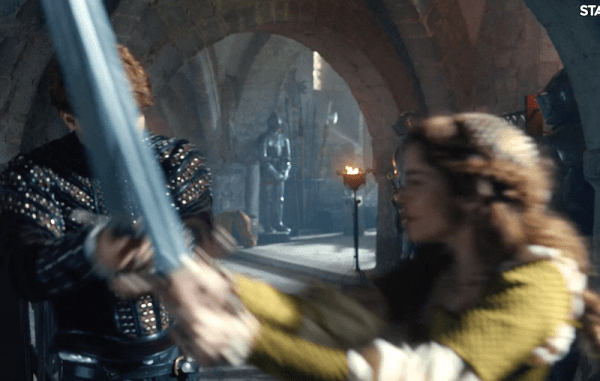 Ah yes, we must have her be a badass swordswoman. This was a woman of steel, but her strength came from moral character, not weaponry. I do like the netted/beaded cap, although PUT YER FRICKIN’ HAIR UP MISSY. For practical reasons (you’re sword-fighting!) if not for historical accuracy. 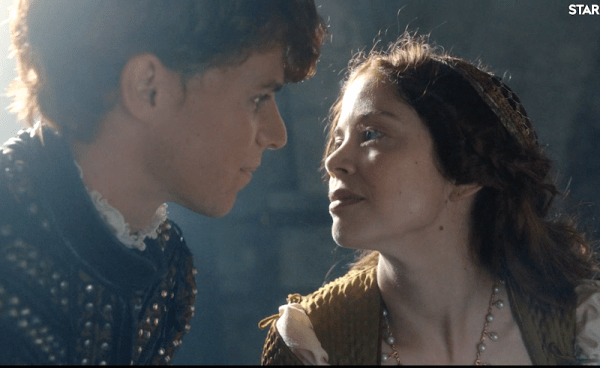 Can’t see enough of the dress to comment. Is that Arthur? What happened to the fabulous bowl cut?? 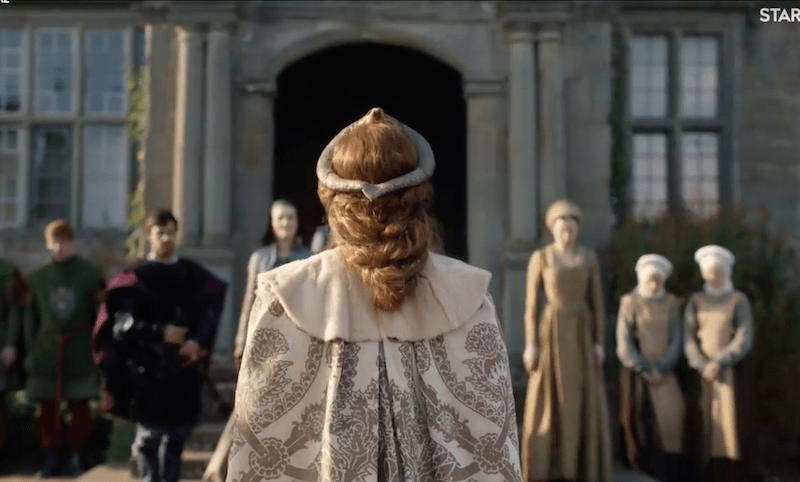 Hair’s up, yay! No idea what’s up with the padded crown. Is that the royal princess version of a pudding cap? 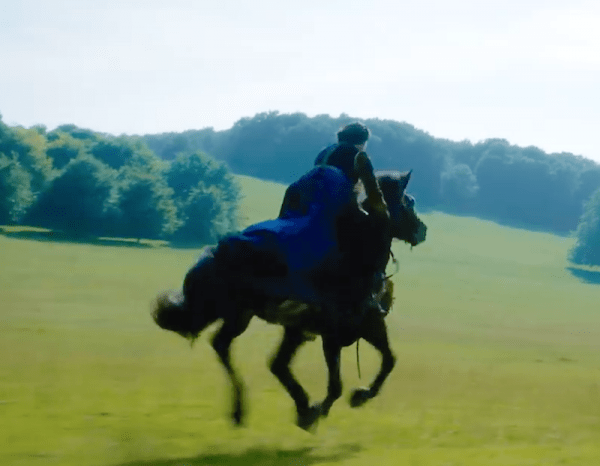 Riding astride in the 16th century, yea or nay?

The Spanish Princess – WHY?