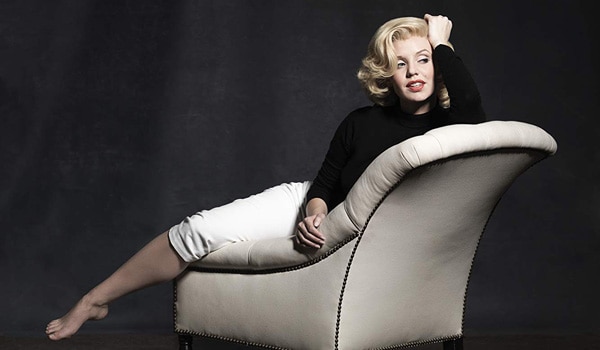 Frock Flicks note: This is a guest post by Andrew Schroeder.

Lifetime original movies get a (somewhat deserved) bad rap. 2015’s The Secret Life of Marilyn Monroe is a notable exception. Though it deviates to some degree from the documented facts about Monroe’s life, it nevertheless paints a moving picture of the deeply troubled yet immensely talented sex goddess, who spent her life searching for the love and affection that always seemed to elude her. Lead actress Kelli Garner crafts a believable characterization of Marilyn –the woman — that never devolves into cheap impersonation (I’m looking at you, Mira Sorvino). Susan Sarandon delivers a creditable performance as Marilyn’s unbalanced mother, Gladys Baker.

Costumes in The Secret Life of Marilyn Monroe

The costumes in The Secret Life of Marilyn Monroe are top-notch. Costume designer Gersha Phillips clearly spent considerable time and effort precisely recreating several of Marilyn’s most iconic film looks, as well as elements of her personal of-screen style. I could only find one interview where Phillips discusses her work on the mini-series, in which notes:

“You know, I’ve done fat-suits and things like that. And when I did [The Secret Life of Marilyn Monroe] we had to do some different augmentations for the body to make our actress, Kelli Garner, look more like Marilyn Monroe, and therefore more voluptuous and more curvy. And we just used different sorts of body padding and augmentations to help us with that.”

To take the actress through 21 years of Monroe’s life, costume designer Gersha Phillips had to manipulate Garner’s body by raising her waist, padding her hips, and lessening her bust line. “In some of the scenes, we had to hide my breasts a little as I’m a little more two-some than she was … Gersha kept things really, really tight … When you shoot over a course of two months, as a woman your body fluctuates. And sometimes Gersha would take something in so tight and be like, This would be great for Friday, and it would be Wednesday. Then come Friday, I don’t know what happened, but I couldn’t get anywhere in it … It was just a dance of, is it gonna fit? Is it gonna zip up? Are we going to have to only shoot it from the front?”

I’m sure Marilyn felt similarly about her costumes at times!

I was so impressed with all of the costume design so I’ll run down all of the direct historical recreations I spotted. I’m sure I missed a few… 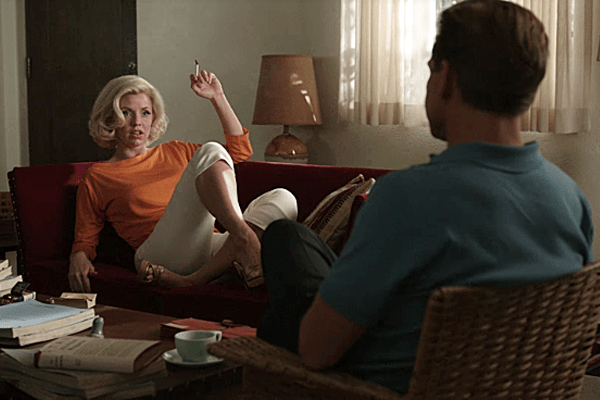 The series uses a framing device in which Marilyn pours out her lifetime of troubles to a fictional psychiatrist. 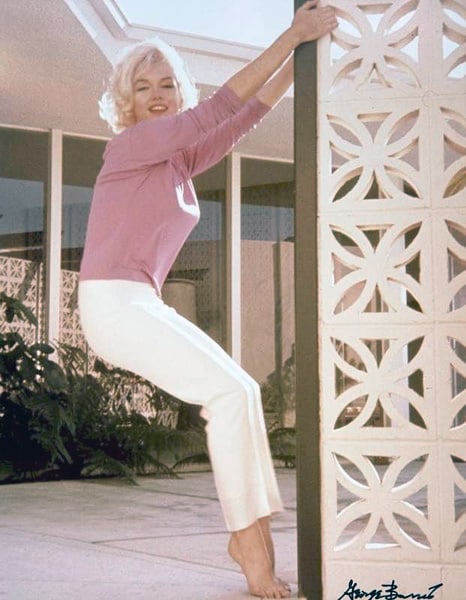 Her outfit in those scenes calls back to the Pucci tops and pedal pushers Marilyn wore in her final photo shoot (shown here) with George Barris in June 1962. 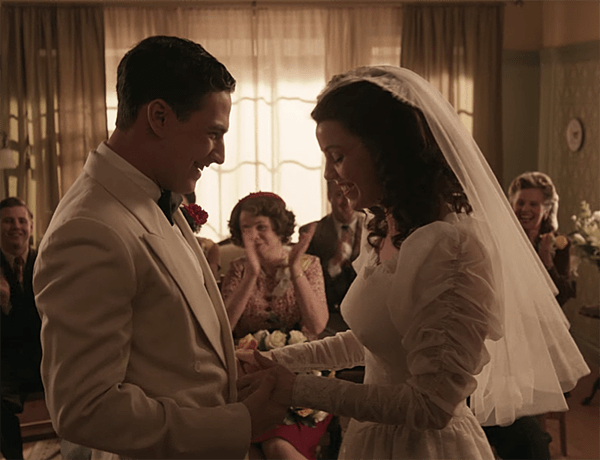 Norma Jeane’s wedding in the movie. 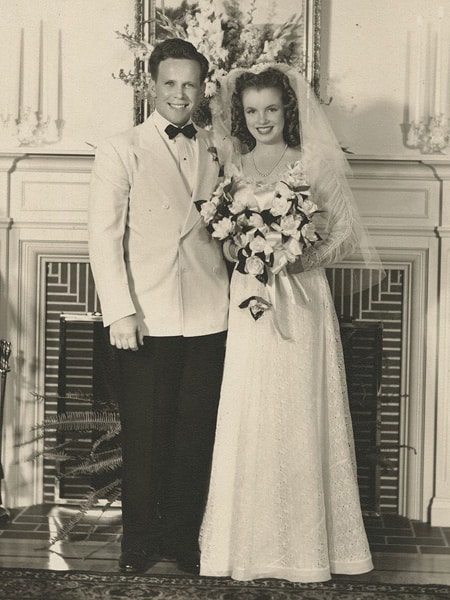 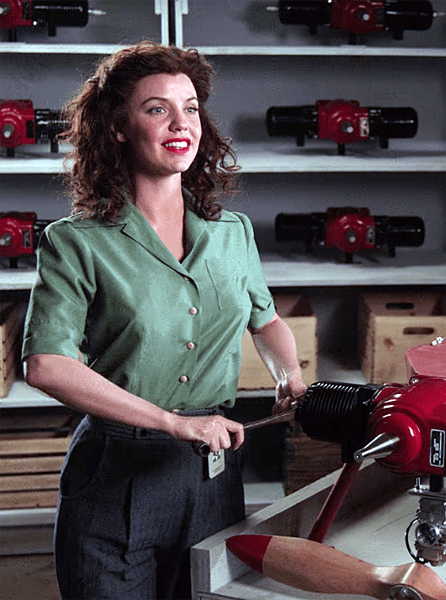 Repro of her first professional photos. 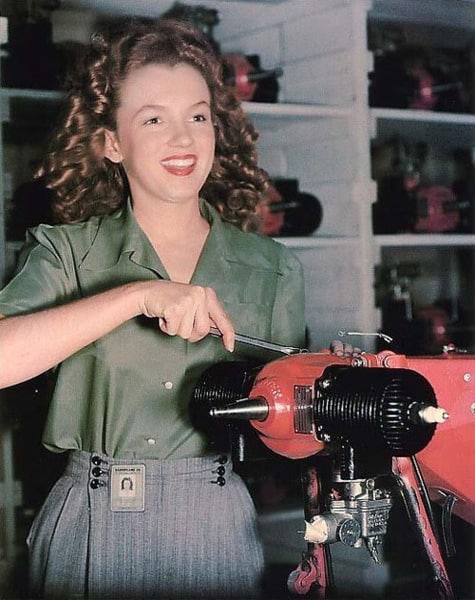 Norma Jeane’s actual first pro photos, taken in 1944 by George Conover, at the Radioplane factory where she worked during WWII. 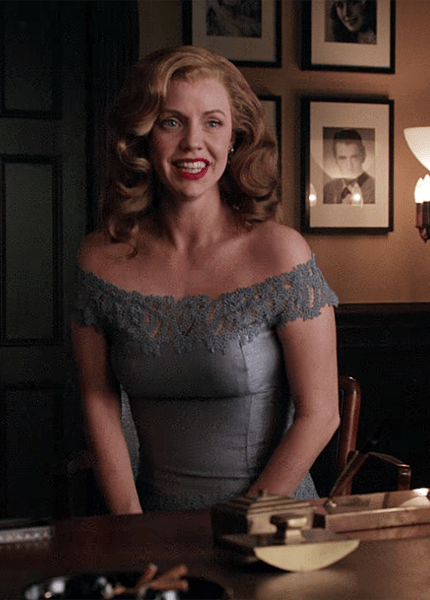 In the movie, the newly minted “Marilyn Monroe” signs her first contract with Ben Lyon at 20th Century Fox in 1946. 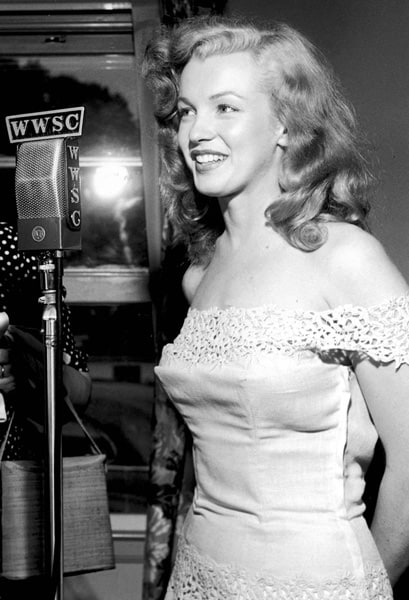 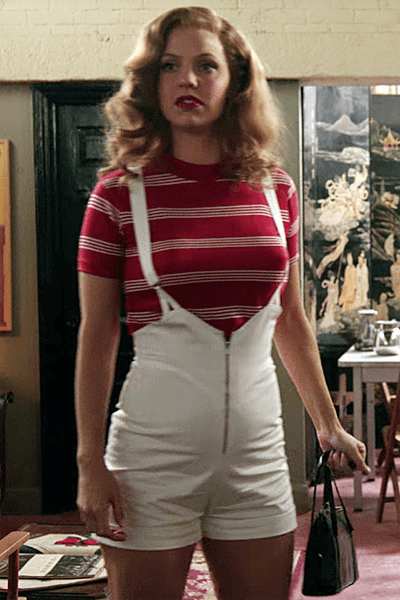 In the movie, a down-on-her-luck Marilyn arrives at the studio of Tom Kelley to take some discreet calendar nudes in 1949, which in real life would later come back to haunt her. 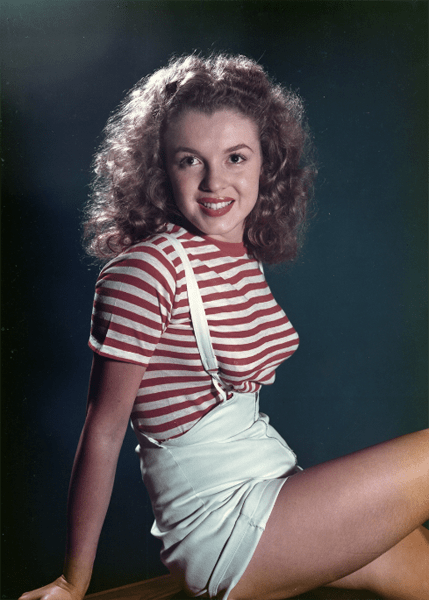 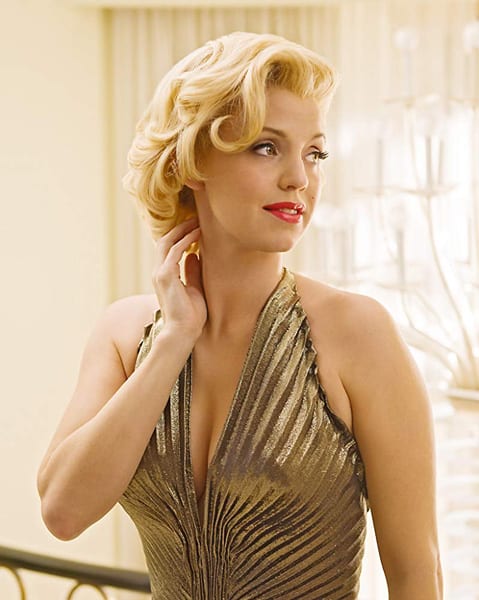 Marilyn attends the Photoplay Awards in 1953, where she received the award for “Fastest Rising Star.” This is an absolutely gorgeous reproduction of the “sunburst” dress designed by William Travilla, versions of which Marilyn wore briefly in Gentlemen Prefer Blondes (1952), to the Photoplay awards, and for publicity photos. I wanna know where they found that lamé! 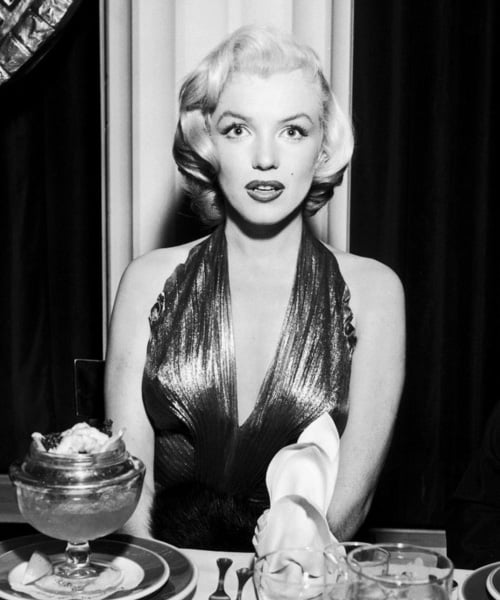 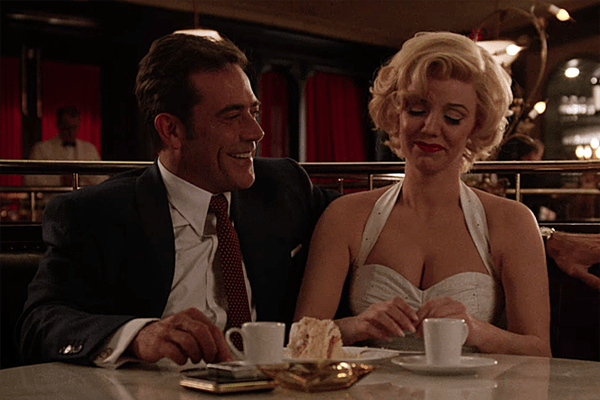 Marilyn’s first date with Joe DiMaggio in the movie. 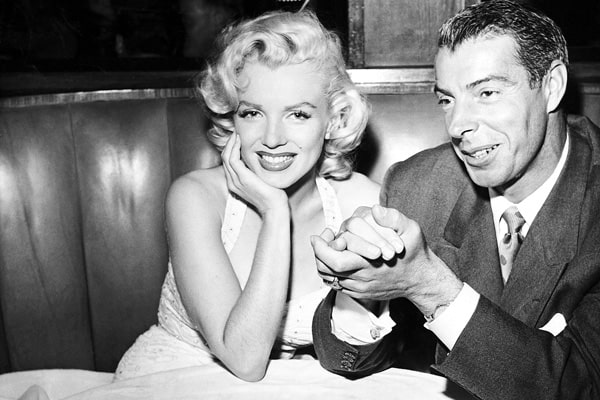 Real photo of Marilyn and Joe, after Marilyn stuck her handprints in the cement at Grauman’s Chinese Theatre, 1953. 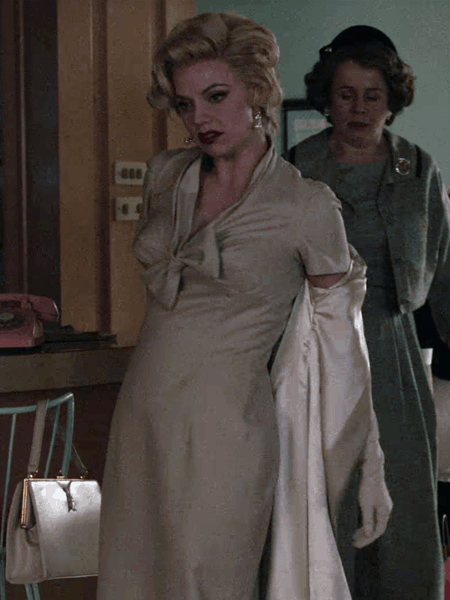 This dress was originally designed by Travilla for There’s No Business Like Show Business (1954) and was later worn as part of Marilyn’s personal wardrobe. 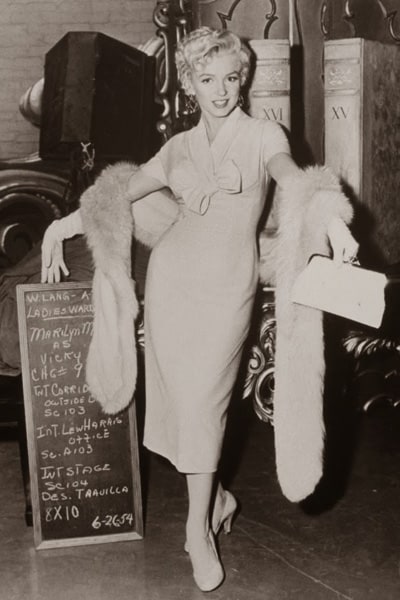 Actual wardrobe test from There’s No Business Like Show Business. 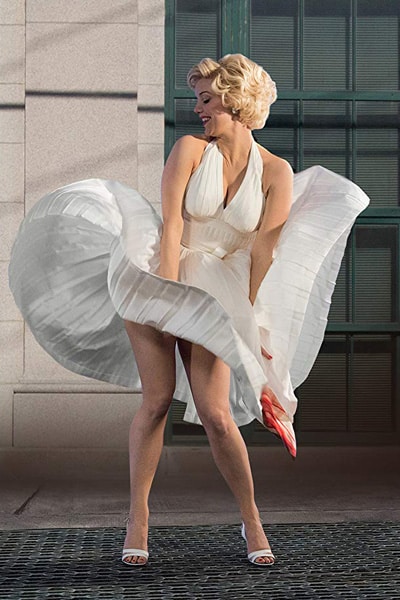 One of the most iconic costumes in movie history — Travilla’s “subway” dress from The Seven Year Itch (1955). They even got the shoes right! 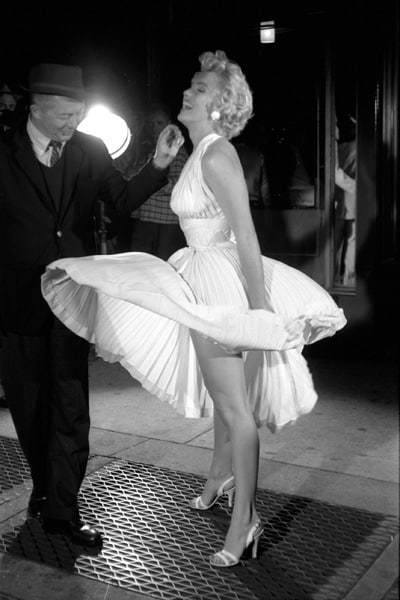 The real one was auctioned as part of Debbie Reynolds’ collection in 2011. 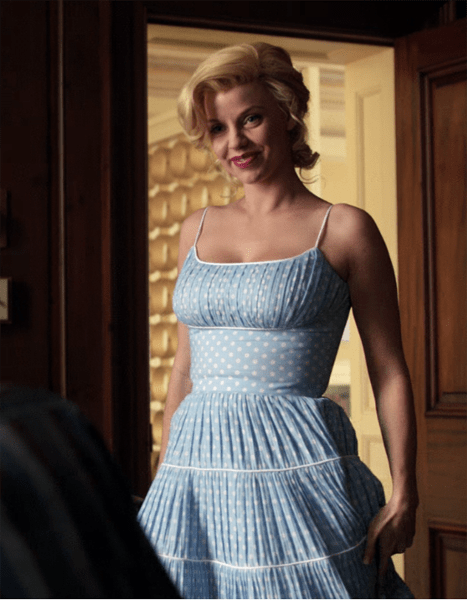 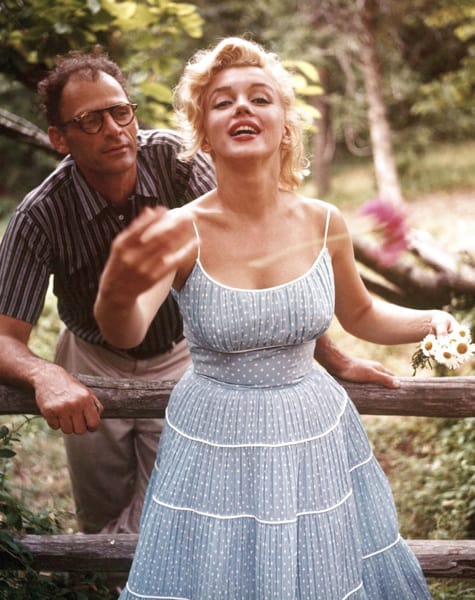 Marilyn and Miller from a photoshoot by Sam Shaw at their home in Connecticut in 1957. 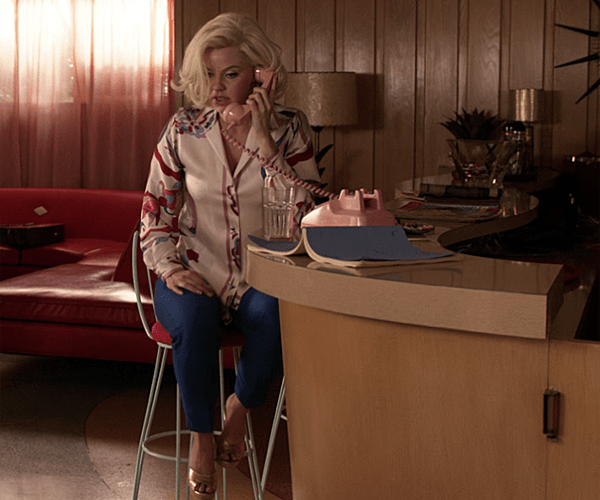 Marilyn gets paranoid after hooking up with President Kennedy (this is where the movie’s narrative starts to go off the rails a little bit). 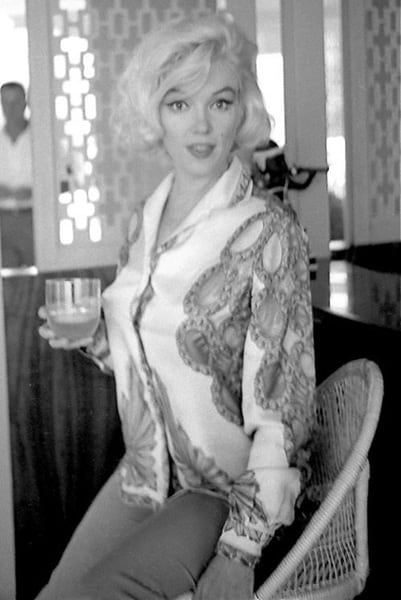 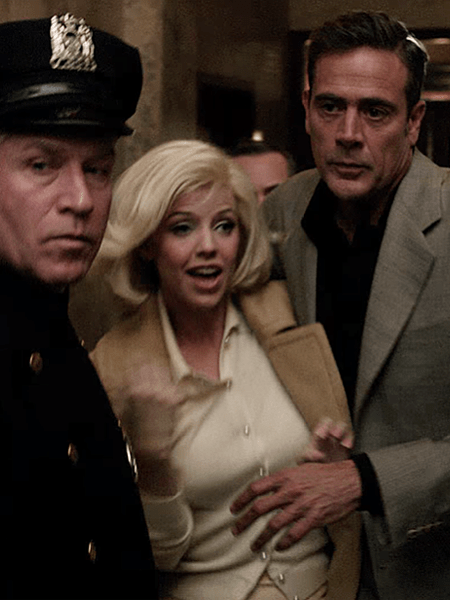 In the movie, Joe DiMaggio has Marilyn released from the Payne Whitney Psychiatric Clinic after she is coerced into having herself committed. 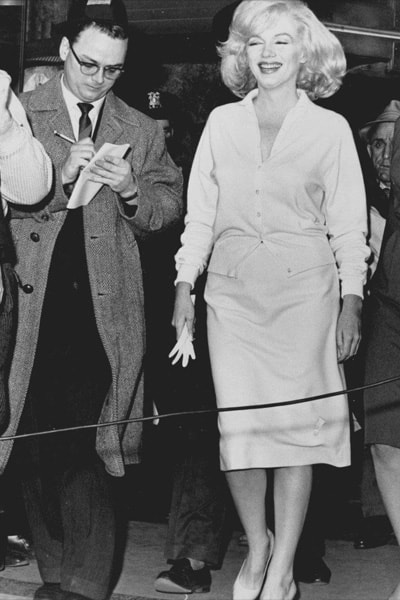 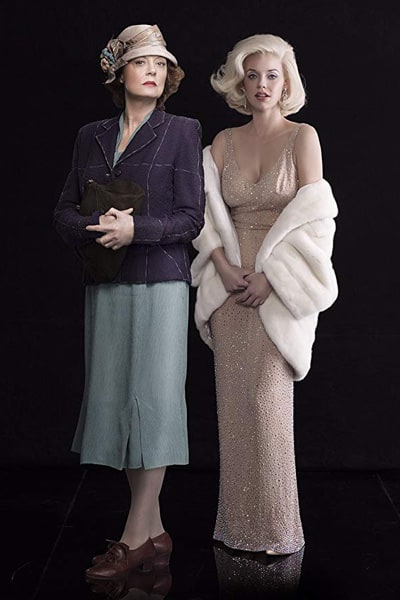 The infamous Jean Louis “nude” gown worn by Marilyn to sing “Happy Birthday” to JFK at Madison Square Garden, May 19, 1962. This costume may have been reused from The Kennedys (2011). That’s Susan Sarandon as Marilyn’s mother, Gladys Mortenson. 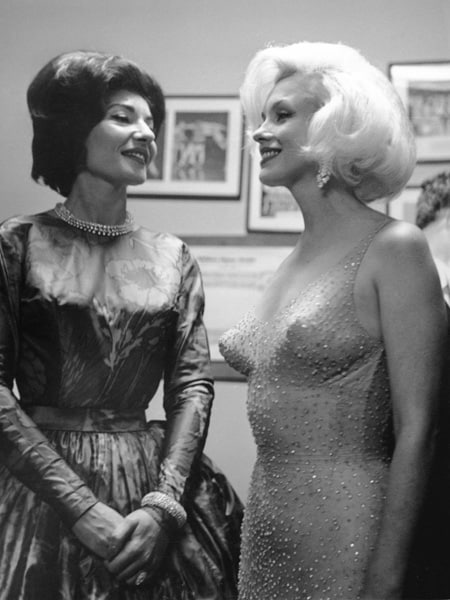 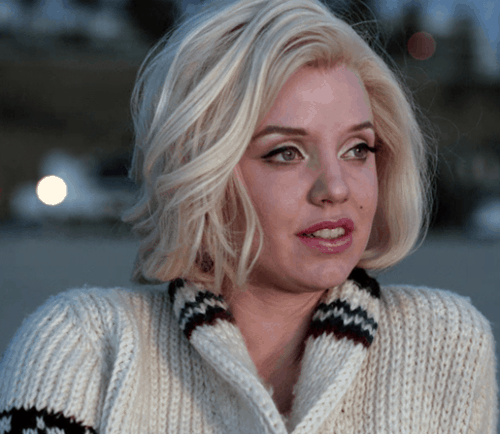 Pensive Marilyn on the beach at the end of the movie. 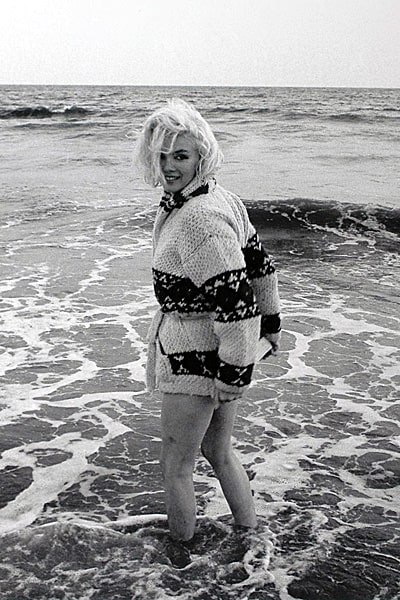 Another iconic look from her final photoshoot with George Barris in 1962. I wonder if they got lucky finding an original or if it was custom-knit? Marilyn’s real sweater is on display at Ripley’s Believe It or Not! in Los Angeles (or at least it was when I was there in 2012).

Are you a Marilyn fan? Have you seen The Secret Life of Marilyn Monroe?