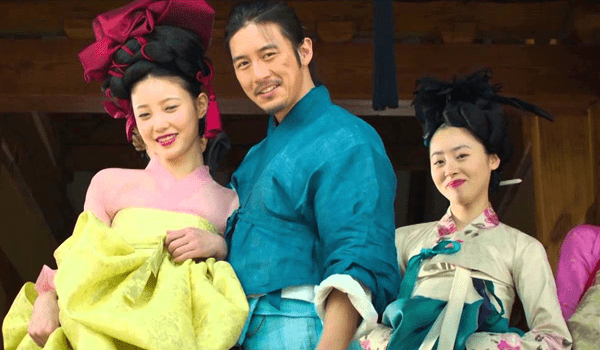 How could I resist a Korean historical drama about dueling court tailors? Unlike many Korean serial dramas, The Royal Tailor aka Sanguiwon (2014) is neither a romance nor a action/marital arts story — instead, it’s a movie about two men who conflict over needle, thread, and politics. Awesome!

While the story is set in the middle of the Joseon period (probably the early 18th century), it opens at a modern-day museum where a fashion history display is being opened about the ‘revolutionary’ designs of the Joseon court tailor Jo Dol-seok. Then the film goes back in time to show Jo Dol-seok himself, a technically brilliant craftsman who runs the Sanguiwon, the royal wardrobe department. Jo Dol-seok is in charge of creating robes for the new king as he comes out of mourning for his elder brother, the last king.

This tailor is contrasted with Lee Gong-jin, a brash, young designer who hangs out at the giseang house (essentially, with the courtesans / female entertainers) and makes wildly inventive and unusual gowns for the ladies. His creations attract the attention of the queen, who was married to the deceased king and has been passed along to the new king (who she had been in love with all along; OK, there is some romance in this story). Lee Gong-jin begins creating adventurous new gowns for the queen so she can win the king away from a new mistress — who is getting gowns from the official court tailor, Jo Dol-seok.

The older Jo Dol-seok sews while the younger Lee Gong-jin watches. Check out the rainbow of thread spools behind them!

Much of the film is a back-and-forth competition between the older Jo Dol-seok and the younger Lee Gong-jin as they put different styles of hanbok, the Korean clothing of the period, on court women. This ensemble consists of an upper garment, jeogori, and skirt, chima. Traditionally, these had been rather baggy, but the new style (in the film, invented by Lee Gong-jin) is for a much tighter and shorter jeogori and a bell- or jar-shaped chima. The effect is visually dramatic and striking.

While the two tailors are pitted against each other, they also form a genuine friendship based on recognition of each other’s unique talents. Lee Gong-jin seems to look up to the older tailor as a father figure. They even share a fantasy dream sequence! In the end, Jo Dol-seok is the name that’s remembered at the modern museum, as the film closes with the same framing device it began with. But we’ll know that’s not what “really” happened. (Note: none of this happened, it’s a fictional story — aside from the fact that fashions did change during the Joseon era.) Lee Gong-jin furiously drapes an amazing gown for the queen on this two-dimensional dress form.

Costumes in The Royal Tailor

I will admit to knowing next to nothing about Korean historical costume except it’s pretty. And The Royal Tailor makes it look very, very pretty! Costume designer Cho Sang-kyung was inspired by the clothing worn during King Yeongj’s rule (1724-1776), although the film does not name a specific king or year. She and her team made over 1,000 hanbok for the movie, which cost about 1 billion South Korean won (approximately $909,000 USD). The show-stopping gown the queen wears during the banquet scene is embellished with some 3,000 pearls! Detail from a larger Shin Yun-bok painting on Wikimedia Commons. The women at the giseang house in The Royal Tailor. The queen in a promo image.

The ‘new’ style gown Lee Gong-jin designs for her. Even the queen sews a little bit in this film (there’s a lot of sewing!).