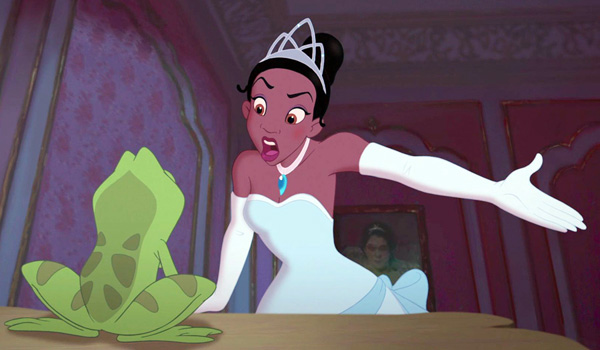 Disney princesses are possibly some of the best-known characters worldwide, and part of their appeal lies in their oldey-timey-ness. Each one is certainly a product of the period in which the movie was made, but they are also almost always set in a fantasy historical setting … and thus, their costumes are fantasy historical as well. In this series, we’re going to analyze each of the Disney princesses to discuss the historical influences in their costumes. Previously, we analyzed Snow White (1937), Cinderella (1950) in two parts, Sleeping Beauty (1959), and The Little Mermaid (1989).

Since I got Disney+ for Hamilton, I looked around to see if there was anything else I might watch for the month before I canceled it. And I noticed The Princess and the Frog (2009), which I’d missed back in the day. I found it’s an enjoyable addition to the Disney princess canon, plus the flick has a delightful take on 1920s New Orleans style. So I’m taking editorial privilege, and I’m jumping into Kendra’s Disney princess series, hah!

Do you want to read all of this review (with over 2,300 words and over 60 images) about the movie The Princess and the Frog (2009)?  The full post is available on Patreon for our subscribers! Check it out here. We’ll make this post available to everyone one year from today. Until then, only Patreon subscribers can view it!