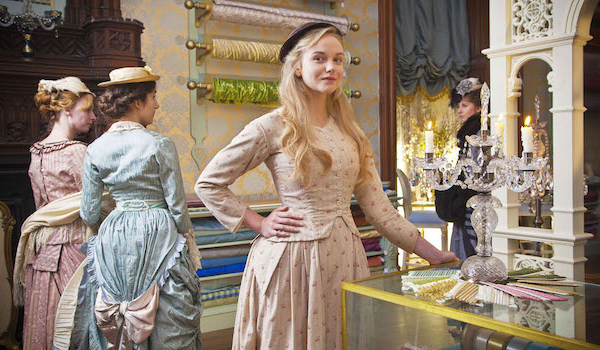 Based on a novel by Emile Zola, this series tells the story of poor, country girl Denise, who comes to London in the 1870s and finds a job at a department store called The Paradise. You follow her transition from country mouse to city girl who turns out to have a flair for the burgeoning world of shopping and selling, plus learn about the various characters whose lives connect through the store. In particular, these include her handsome, charming boss, the older manager of her department who tries to stifle her, and various co-workers, some of whom support her and some who compete. The plot-lines are very interesting and it’s all a great premise, as there’s many different characters and stories to follow.

The costuming is overall really quite good, probably an A-. I LOVE the shopgirl uniforms, which are these stunning black natural form dresses with little Chinese brocade shrugs. The store owner’s love interest (played by Elaine Cassidy), the wealthiest female character, is a mixed bag. Some of her dresses seem too limp, like they need more petticoats/a better bustle, and sometimes the trimming seems too heavy handed. Other times, she wears very chic dresses with cute little waistcoat effects. By mid-season, I was starting to get annoyed that ALL of her dresses were (at base) white, and wondering if they were just retrimming a couple of white dresses — but near the end of the season, her character goes through some changes that are reflected in her costumes, so I now believe it was a conscious, thoughtful choice. They also did a great job creating the department store, which is absolutely gorgeous! I am downgrading it from a 4 to a 3 because the second season has lost my interest.