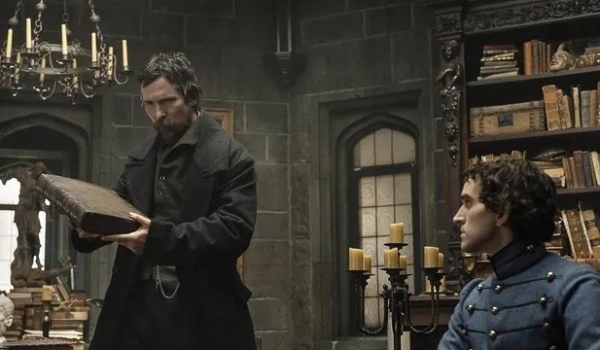 The Pale Blue Eye (2022) recently dropped on Netflix, and I decided to give it a watch, being a fan of both Edgar Allan Poe and wacky 1830s fashion. Right off the bat, it’s really not a Poe-biopic at all, so abandon that idea if you’re thinking you’re going to get something remotely based in historical fact (ok, Poe did attend West Point for a hot second). And Poe, played by Harry Melling (The Queen’s Gambit, and of course, the Harry Potter franchise), is mostly a sidekick to Christian Bale’s moody and inscrutable Inspector Landor, who is called to West Point to investigate a series of gruesome murders. The rest of the cast is packed with notables, such as Gillian Anderson, Toby Jones, and Lucy Boynton (who is starting to rack up a number of frock flicks and will shortly need her own Woman Crush Wednesday post). The plot is based on the 2003 novel of the same name, by Louis Bayard, which itself is derived from the Poe poem, “Lenore,” but again, it’s more Poe in vibe than anything. Landor certainly comes across as a precursor to Poe’s C. Auguste Dupin, and I think we are supposed to infer that Landor is Poe’s inspiration for the character, but it’s not something the movie plot dwells too much on, so only people who actually read Poe’s mystery novels will make the connection.

The film itself is fine, nothing really to write home about (or fill an entire post deconstructing and discussing), so if you’re into period murder mysteries you probably will at least be mildly entertained. But if you’re here for the costumes, there’s a lot more to unpack. 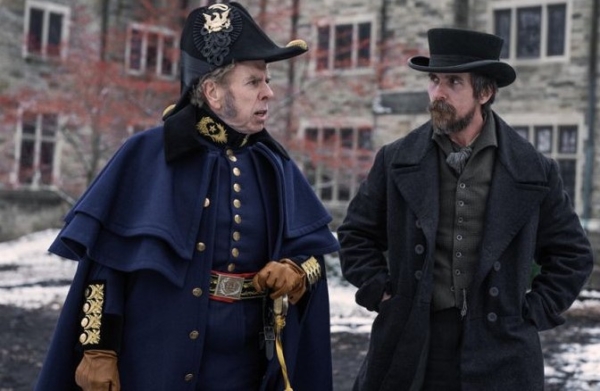 The military costumes are beautifully done.

The film is set in 1830, and for the most part, the costumes stick pretty faithfully to that year (with only one notable deviation, which I will discuss below). And for a flick that takes place at a military academy, there are several female characters central to the plot who have a fair bit of screen time and who are attired gorgeously. I will also add that the menswear is really beautifully done, but with all menswear post-1820, it tends to be pretty standard frock-coat-waistcoat-top-hat-ok-cool-whatever-bring-on-the-ridiculous-bonnets-and-big-sleeves. The costumes were designed by Kasia Walicka-Maimone, who most recently designed the gorgeous costumes in The Gilded Age (2022-). The designs are clearly meticulously researched and beautifully brought to life for the screen. No idea if Walicka-Maimone will get an Oscar nod for her work on this film, but in my humble opinion it deserves a lot more recognition than it’s getting in the general press.

Eric Winterling, who created a number of the gowns worn by the female leads, has been sharing photos of the costumes over on his Instagram account, and I highly recommend checking out the posts: 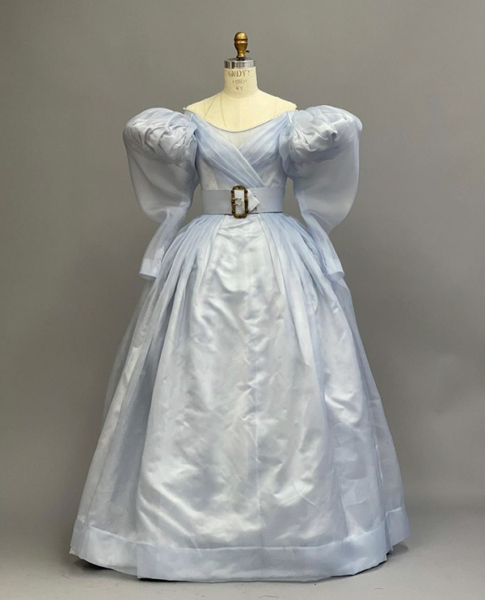 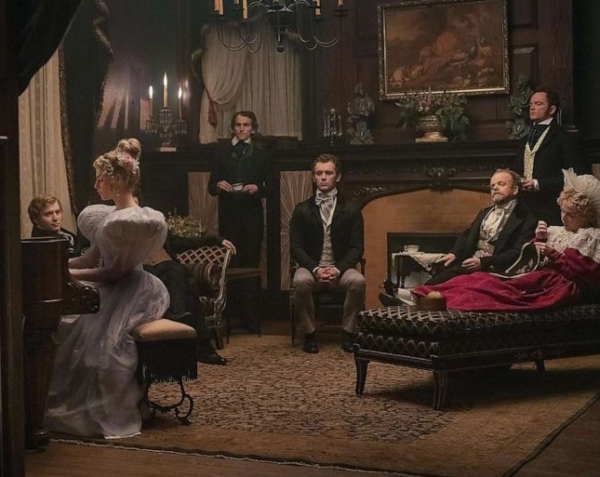 The main cast assembled in the parlor. 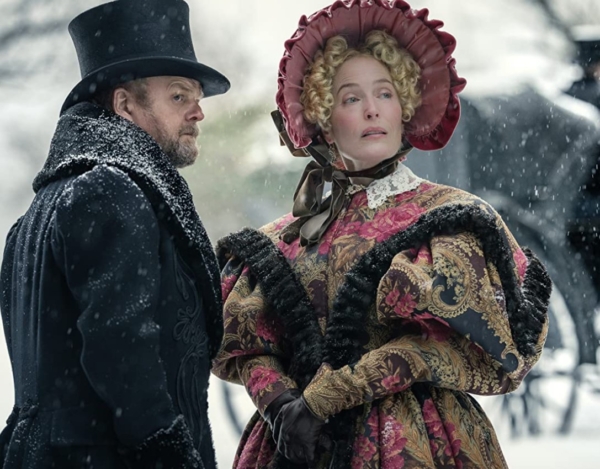 I do admit I’m a sucker for a pelerine collar. And the only time a giant bonnet is remotely acceptable is when it’s paired by equally giant sleeves. 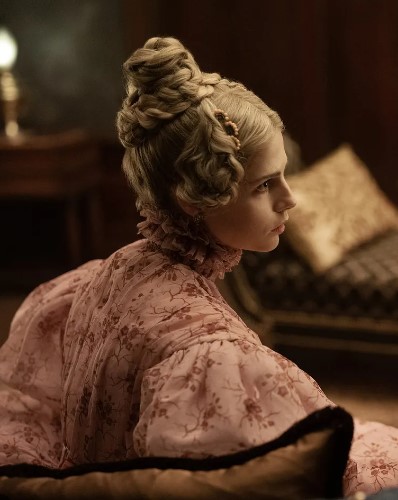 The hair/wig design is also incredible 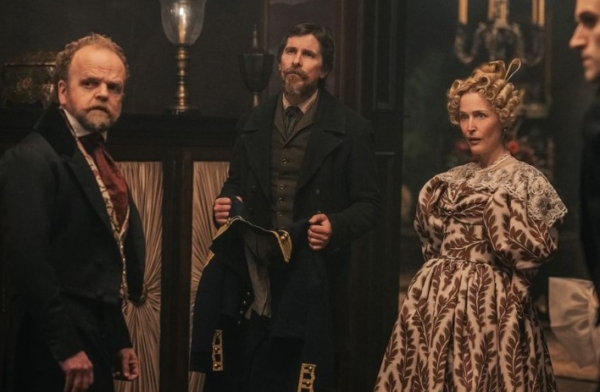 One of the many costumes worn by Gillian Anderson that is just spot-on perfect for the era. 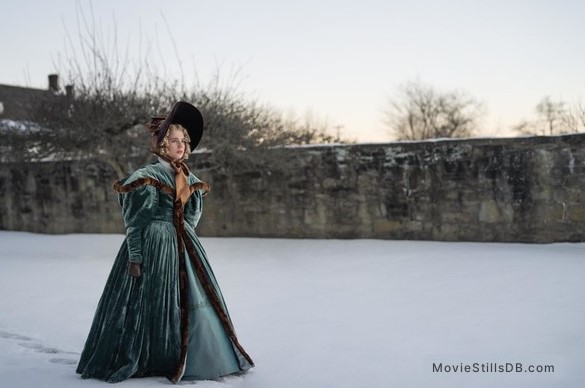 This velvet coat trimmed in brown fur has gotten a lot of attention in the promo photos I’ve seen so far. And understandably so, because it is fabulous. 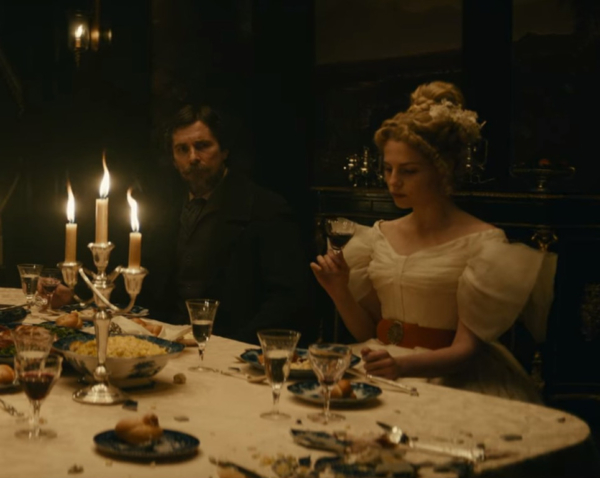 Another gown worn by Lucy Boynton that I was hoping to find better images of online, but sadly turned up empty-handed. You will just have to deal with the screenshot I was able to grab from the film. 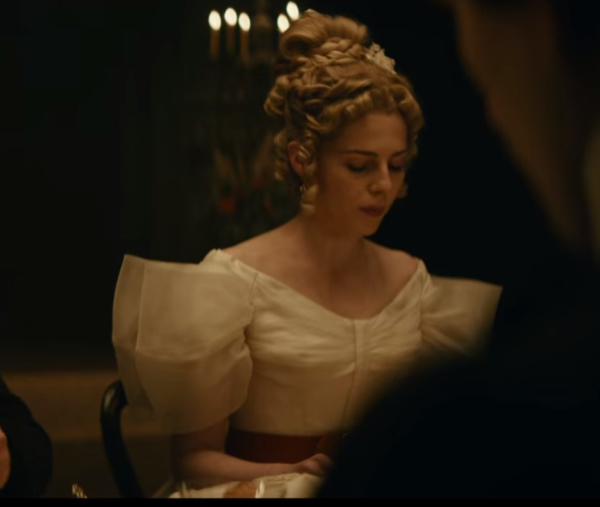 I love the sleeves!

So, about that one costume I mentioned above that deviated from the otherwise tightly-adhered-to date of 1830 is actually my favorite design in the film. It’s a black and white striped gown worn by Gillian Anderson, and I had to struggle to get clear screencaps of it, because of course no one is out there celebrating how absolutely fabulous this dress is. But it’s definitely more of an 1840s silhouette, with the pagoda sleeves not making an entrance into fashion until the very early 1840s. 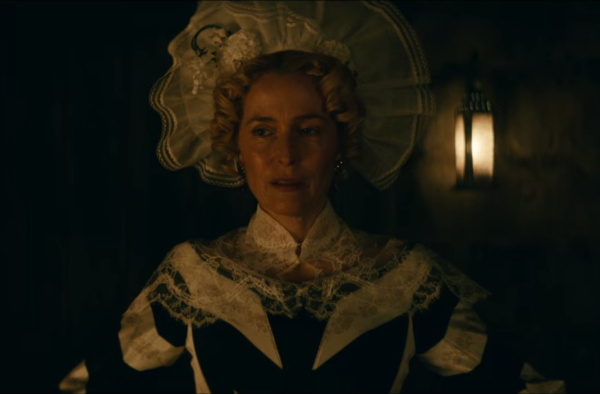 The hat, the lacy collar, the whole look is amazing … But it’s pretty far fashion-forward for the rest of the film. 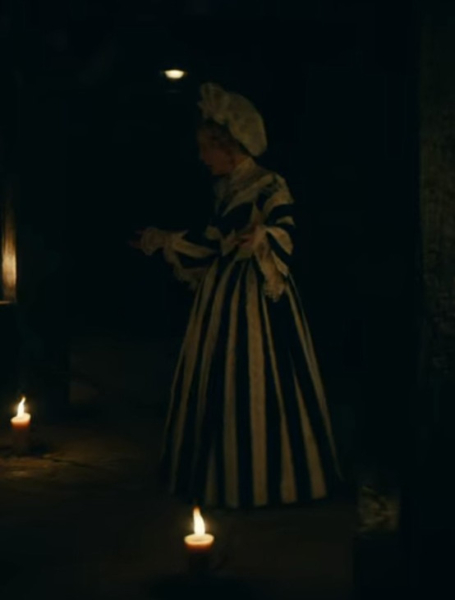 You don’t start to see the pagoda sleeves making an appearance until sleeves in general have migrated from all the fullness at the shoulders in the early-1830s down the arms and finally opening up to a bell shape in the early-1840s.

I can see a lot of similarities to this gown worn by Baroness Burdett-Coutts, painted in 1840: 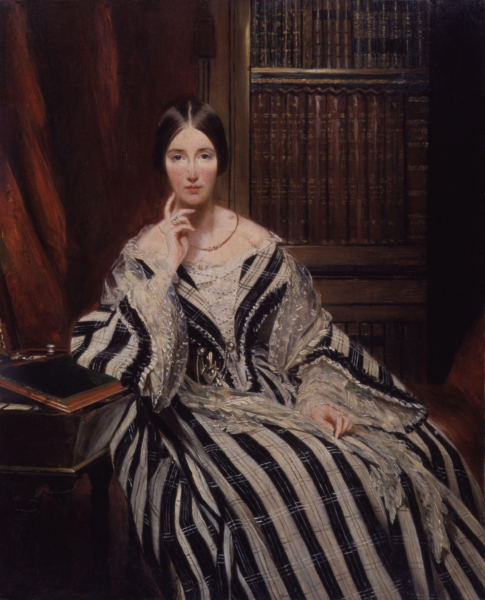 Have you watched The Pale Blue Eye (2022)? What did you think of the costumes? Tell us in the comments!