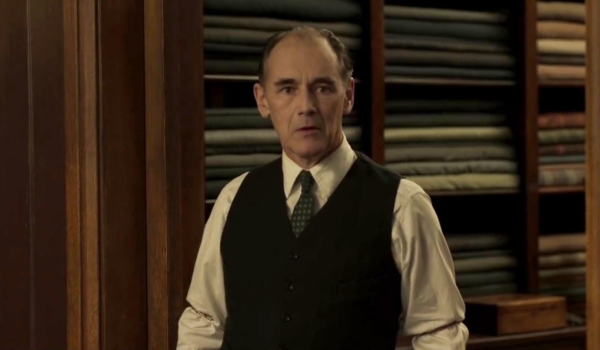 Frock Flicks doesn’t usually get special screening access for new films, so this was one of the rare occasions where we were lucky enough to be included in the press preview, and of course I jumped at the chance to be the one to review the film for the blog. Why? 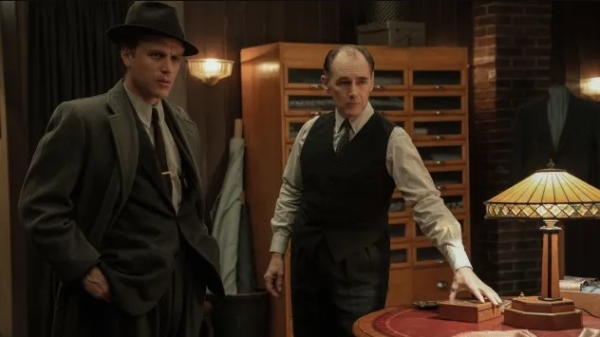 Basically anything with him in it is going to get my full, undivided attentionevery time. But this film had a couple of other interesting aspects that also sweetened the deal for me. First, it’s a tidy little spin on the usual period gangster flick, which I found intriguing. Second, Mark Rylance plays a Savile Row trained cutter (not a tailor, thankyouverymuch) who operates a workshop in 1950s Chicago that appears to be functioning as a drop location for one of the local Irish mob bosses. 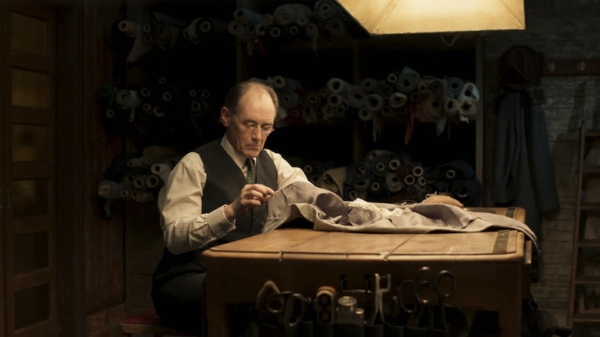 You mean I get to watch Mark Rylance sew for 2 hours? YES PLEASE WHERE DO I SIGN UP???

Of course, I was also curious to see how well he performed at the sewing, and, well, I am happy to say that I was very impressed by the attention the film paid to getting the sewing scenes right. Rylance certainly looked as if he knew how to wield a thimble and needle and thread, satisfying my hitherto unknown need to see Mark Rylance quietly stitching away into the night in a beautiful little sewing studio. Things I never knew I needed in my life, people. In keeping with Rylance’s usual finely honed attention to detail, he spent time in a Savile Row tailor shop, learning the art of tailoring at the feet of the masters. It’s always satisfying to watch someone who is competent in their craft learning and appreciating competency in another craft. 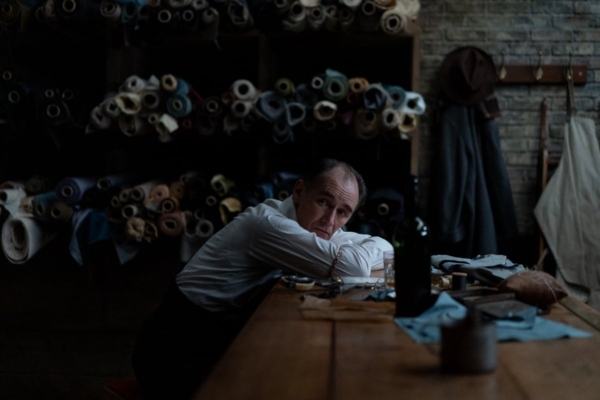 I’ve been there, man.

“We talked so much about the layers of the clothing as the layers of the character,” explains Moore, who wrote the script with Rylance in mind. “Over the course of the film, his layers come off, so to speak, in the same way layers of clothing might come off. A question Mark would often ask me as we would shoot a scene was ‘How much do you want to know about what I’m really thinking or feeling right now?’ That became a really great dial we could tune. Mark is such a great craftsman at finely calibrating that.” — Graham Moore, director, in an interview with the L.A. Times.

And that craftsmanship and calibration is absolutely informed by the clothing worn by all the characters in this little film. Sophie O’Neill, costume designer for the suit-focused Kingsmen series, and fashion designer Zac Posen, famous for his precision tailoring, teamed up to create expertly fitted suits for the gangsters, youthful-yet-professional looks for Leonard’s assistant Mabel (played by Zoey Deutch), and the precisely tailored outfit for La Fontaine (played by Nikki Amuka-Bird).

You can read a really insightful article on Variety that delves into Posen’s approach to informing the practical aspects of the sewing craft as well as the clothing worn by the characters.

La Fontaine is easily one of the most understated, yet commanding characters in this this film.

Everyone is in browns and grays, except Mable, a testament to her youthful vibrance and potential.

I highly recommend seeing this film. It’s satisfying on all counts, from the plot, to the acting, to the set design, to (duh) the clothing.

The Outfit is in theaters now!