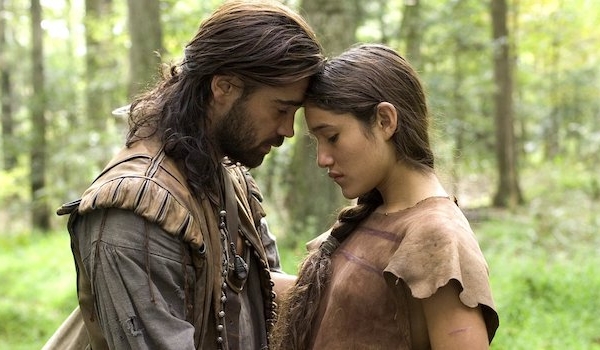 A couple of weeks ago, I ran a poll asking which 17th-century frock flick you’d like to see me review. The winner by a decent measure was The New World (2005), a sweeping homage to the (historically inaccurate) romance between John Smith (Colin Farrell) and Pocahontas (Q’orianka Kilcher). I was warned before going in that the movie was dry. Like, so dry you had to choke it down with a glass of water and still cough up sawdust. It honestly wasn’t that bad. There were things about director Terrance Malick’s style that rubbed me a bit wrong here and there, but overall, it reminded me a lot in cinematic feel to another highly meditative/sparsely dialogued film, Sofia Coppola’s Marie Antoinette, (which was incidentally released within a year of The New World, if one can be so bold to draw thematic lines between the two). I really did find a lot of parallels between the two films.

Initially, I was skeptical about the film, not because of my usual skepticism about Hollywood’s lackadaisical approach to historical accuracy, but because of a long history of Hollywood completely screwing up films about Native Americans. And the fact that the plot of this film is centered on a bit of historical fan-fic written decades after John Smith allegedly befriended the daughter of Powhatan, and was almost certainly writing the story to make himself look as fabulous as possible, well … I was worried, to put it lightly. Many reviewers drew parallels to Disney’s Pocahontas and were quick to point out that like the cartoon, the live-action version was thin on historicity and heavy on the romance between Smith and Pocahontas, who would have been 10 or 11 at the time their great romance was blossoming. Leaving all that aside, the film was fine. It managed to keep my interest well enough for two-and-a-quarter-hours, even though I had to turn on the subtitles halfway through because all the English actors were so freaking mumbly, it was hard to make out what they were saying half the time. Watching the film as someone who is not Native American, nor well versed in their cultural and historical narratives, at least I came away with the feeling that there was an effort put into respecting the complexity in the first contacts between the English and the Algonquian. I absolutely welcome further education on this topic, so feel free to share it in the comments!

So, having established that, let’s actually discuss the costumes! Unfortunately, I am not in the least bit versed in what the Algonquian tribes wore in the 17th century, so I’m going to have to punt that entirely. Suffice it to say, most of the reviews I read tried very hard to mention that Malick wanted things to be very authentic and he worked with experts on Native American material culture when creating the costumes and sets (and, indeed, recreating a language as close to the one spoken by Pocahontas’ tribe as possible). In fact, most reviews were quick to point out how much Malick got right with respect to Native American culture, thanks to his work with these experts, so I’m going to have to leave the discussion of the Algonquian costumes there (unless someone reading this is an expert and would like to write an article for us). What I can, of course, talk at length about is the English clothing in the film. For a significant amount of the film, the story is focused on a lot of mud and grime in the budding Virginia settlement, so it’s pretty grim. Overall, the film gets the silhouette’s of the early 17th century pretty well, but the details are not quite there when viewed up close. The English costumes get interesting once the action shifts to England in the last 1/8th of the film, which is pretty far in for a “costume flick,” I have to admit. Also, by “interesting,” I mean it’s a smorgasbord of “name that recycled movie costume.”

After being disowned by her father for aiding the English, Pocahontas winds up in the Virginia settlement and adopts the English style of dress … up to a point. There’s a lot of underwear as outerwear, which I’m sure is a cinematic gesture making her look slightly out of place and easy on the modern eye. At least after she gets married, her hair is mostly consistently up unless she’s “at home,” so points there for not falling prey to the Great Bobby Pin Shortage.

The first thing she gets in the English settlement is a pair of bodies, which is actually a good shape for the early 17th century. It’s unclear as to why it looks like it’s been taken off a corpse and dragged through a swamp for some reason.

At one point, Pocahontas wears this kicky shrug, which has no basis in historical anything, but is an outward sign of her not handling the news of John Smith’s death well at all. Moving on up the social ladder, Pocahontas is now married to John Rolfe and goes by the Anglo name “Rebecca” but she’s still wearing her underwear on the outside, even when the other ladies in the settlement are fully dressed. I dunno, it’s artistic or something. At least her hair is up.

A minor thing that irritated me was that all the lacing on the bodices is incorrect for this period. Yes, I am being hella nitpicky, but it should be spiral laced, not laced like a freaking tennis shoe!

An example of the costumes worn by the Englishwomen in the settlement. They do look pretty good silhouette-wise, for the 1600s. The green one pings my recycled costume radar pretty hard, but I’m not easily placing it.

I liked the black damask gown that Pocahontas wears during her arrival in England, but we can quibble about the use of back-lacing this early. I have found one example from this era that shows back-lacing, but it’s vastly outnumbered by many more sources that show these types of gowns were front opening, and probably closed by buttons, hooks & eyes, pins, or stitching.

This is a the black undergown to the court outfit that she wears when she is presented to King James and Queen Anne. It correctly buttons up the front.

This is the only outfit that, as far as I can tell, was based on anything historical. It’s obviously copying the portrait of “Rebecca Rolfe” that was painted contemporaneously to her arrival in London. I WANT A BETTER VIEW OF THE COSTUMES THE WOMEN IN THE BACK ARE WEARING BECAUSE THEY LOOK REALLY GOOD ARRRGH. Portrait of Pocahontas, c.1616. After a portrait by Simon van de Passe and in the collection of the National Portrait Gallery, Washington, D.C.

Now we are getting into identifiable recycled movie costume territory. The gown worn by Queen Anne is the same worn by Dame Judi Dench in Shakespeare in Love. And I think the costume worn by King James is the same as worn by Colin Firth in that movie, as well.

Recycled Movie Costumes can’t document this fabulous embroidered jacket earlier than this movie, so it’s possible it was made specifically for the film. If so, it’s a damn good copy of one of a handful of extant embroidered jackets dating to early 17th-century England, such as the famous Layton Jacket at the Victoria & Albert Museum. I’m kind of wondering why the rest of the costumes weren’t as amazing as this one…

More recycled movie costumes! This pink gown was immediately identifiable as one of the many gowns made for Elizabeth (1998). The downside, however, is that the overall style of the gown is about 50 years out of date for the period in which this film takes place. But it is pretty. Also, she does actually have her hair “up,” in a snood.

Another gown recycled from Elizabeth. I tried like crazy to get a good shot of the front of the gown, but it was tough because she’s running around in it, so everything came out blurry. But just imagine it basically being the same as the pink gown above.

All in all, I think the movie deserves praise for the cinematic aspects and a “meh” on the English costumes. Again, if you are an actual expert on Native American clothing, please do get in touch with us because we would love to hear your take on the costumes in this film.