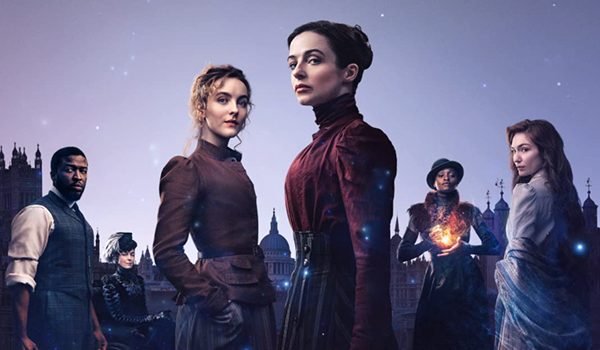 I haven’t watched all the episodes of The Nevers (2021), currently playing on HBO, and a dozen will air in the first season. But I’ve gotten a good taste, plus there’s been some interesting press about the show and the costumes. While this is definitely a science fiction / fantasy series, it’s set in a pretty realistic 1890s London, so it counts as a frock flick IMO.

Some of the early reviews have been critical of the show, which is fine, not every show will be instantly or widely loved. The critiques I’ve heard have boiled down to a) this story was already done as the X-Men (um, no, not in 1890s London that I’m aware of, but then, I only watched one X-Men movie and didn’t care!), b) the characters / plots are just like all of showrunner Joss Whedon’s other shows (I haven’t watched more than one episode of Buffy either, so I have no idea!), and c) toxic and abusive behavior by showrunner Joss Whedon. OK, on the last one, I have no reason to disbelieve the accusations, since power and abuse in Hollywood go together like bread and butter. But does the art reflect the disgusting aspects of the artist? I think that’s the question we should ask, on a case by case basis, and not automatically cancel any piece of art just because it’s made by someone horrible. I don’t see particularly abusive or gross themes in the season so far, plus Whedon left the show after this season. All the actors, the other five writers, the other two directors, and of course, the two costume designers deserve a lot of credit for their work on this series, and I don’t think it’s fair to throw that down the drain just because Whedon is an asshole.

That aside, I’m enjoying the series for the variety of characters, each with complications and backstories of their own that get slowly revealed. The characters have interesting relationships too, and I especially like watching Mrs. Amalia True (Laura Donnelly) and Miss Penance Adair (Ann Skelly) together — they’re like close sisters, who have complimentary personalities, they play off each other well. Most of the main characters are female, and they’re all different and react to their gaining these strange new powers in their own ways. Some parts of the plot are predictable but there’s enough that feels fresh so I tend to come back for another episode. Not quickly, but I’m just not a binge-watcher anyway. Amalia & Penance support each other (tho’ they both have a shortage of hairpins at times). They clean up well when they try!

What I am really interested in is the costumes, and they’re good fodder for Frock Flicks because, unlike the plot, the costumes don’t stray too far from historical. They aren’t fantastical, but the whole world does have its own distinctive look, which is fine, that’s what any movie or TV production would do. The 2020 Emma went all-in with candy-colored pastels in the costumes and art direction to make a point about the artificiality of that world, vs. the soft, natural hues in some Jane Austen period flicks. It’d be unfair to write off The Nevers as “steampunk” — goggles (and, OK, sunglasses) are only worn for appropriate jobs, not casually! — because the costumes have more subtlety than that. Olivia Williams as Lavinia Bidlow in a yellow & red suit. Michele Clapton is the main designer, while Jane Petrie is credited with the pilot episode. Clapton is best-known for her stunning, world-building costume designs for all 8 seasons of Game of Thrones (2011-2019), and she also designed the first season of The Crown (2016), Queen of the Desert (2015), and the David Tennant Casanova (2005), among others. Jane Petrie’s work includes Outlaw King (2018) and the second season of The Crown (2017). Clapton has done some press for The Nevers and explained to Town & Country how she started work on the show:

“It’s funny because I was approached to do it a while before [filming began], but unfortunately, I wasn’t available, so I came in on the second episode, which is always strange. I think it worked quite well, though. I suppose I wanted to create each of these very strong women in their own particular way so that they were identifiable very quickly and would play to their strengths because we get so much of the story just from looking at them.”

The show has a specific timeline — a fantastical event happened in 1893, and the main action of the show happens in 1899 — but the costumes range all over the 1890s. This actually makes good sense because real people in a real city aren’t all wearing clothes that reflect the fashions of one exact year. The women’s clothing silhouettes range around the decade like this:

“The mid 1890s is where we were. I particularly love the huge sleeves and the silhouettes; in fact, sometimes doing the research you can’t believe that these shapes were really worn because they were so extreme. I think some of the men’s wear and most of the society figures — in particular Lavinia Bidlow, who was one of my favorites to design for — are truer to period. Whereas with the orphans, we could have more fun because their backgrounds were diverse, and we often have to think about how we could disguise whatever their affliction was. I say [the costumes on the series are] slightly heightened. I think they make you feel secure in the fact that you are actually in this period and it’s not just a fantasy land.”

Lavinia Bidlow is the wealthy benefactor of the “orphaned” women with magical talents, called The Touched. Lavinia’s money shows in her elaborate costumes and, I guess, because she’s the only woman who consistently wears hats (wtf? did they run out of money for more millinery?). Tons of braid on her bodice, & check out the gorgeous way the ostrich feathers on her hat combine the colors in her outfit. Another promo pic, here the outfit includes a matching capelet.

In an interview with Refinery 29, Michele Clapton commented on how she contrasts the wardrobes of friends Amalia and Penance: “I had the idea to darken Amalia’s color palette and play on the softer tones of Penance’s.” Asymmetrical closures were common on women’s suits & jackets in this period.

Her wardrobe definitely draws from 1890s styles, such as : Though one outfit really stood out to me. Hey, haven’t I seen that fabric before? Oh yeah… Also seen in Poldark (2015) & Belgravia (2020) & both of these outfits have been recycled in various productions (& a slightly different — but close — colorway of this fabric was used on a costume for The Scandalous Lady W (2015); check out the comments where costume designer James Keast mentions it) . Seriously, was there a sale? Did one costume workshop buy all the yardage & now they’re stuck with it? This isn’t a bad fabric, but it’s an obvious & memorable fabric color & pattern, so seeing it used across productions of different time periods sticks out like a sore thumb!

Penance’s clothes do have a lighter overall tone than Amalia’s, fitting her character’s softer personality. I thought this more formal outfit was fussy & not to my taste at all. But I did come across several fashion plates that resembled it! Though why does her hair look like it’s just stuck back with a banana clip or something? For comparison, here are some of the smooth, tidy updos recommended in an 1894 edition of The Delineator magazine.

Harriet Kaur (Kiran Sonia Sawar), one of the young ladies at the orphanage, seems to have a background that will be revealed in a subplot, and I like that the colors and prints of her dresses hint at her South Asian heritage. But hairpins, please! The pocket & cuffs of this gown are in a contrasting print. This is at a formal afternoon party — couldn’t she at least braid up her hair?

The closest to steampunk the costumes get is Rochelle Neil as Annie Carbey in this leather-accented outfit: But it also looks more modern than Victorian, so IDK.

This is a rare show with some slightly interesting (to me!) men’s costumes. Specifically, the degenerate Lord Swan (James Norton): All disheveled & sexy (or at least having sex). Plus, the nasty Beggar King, Declan Orrun (Nick Frost), has some posh duds: The mixed plaids is so Victorian, but it’s also done here with a level of refinement that doesn’t look tacky — the colors are harmonious & the different scales are balanced. This is just outrageous fun!

Are you watching The Nevers?