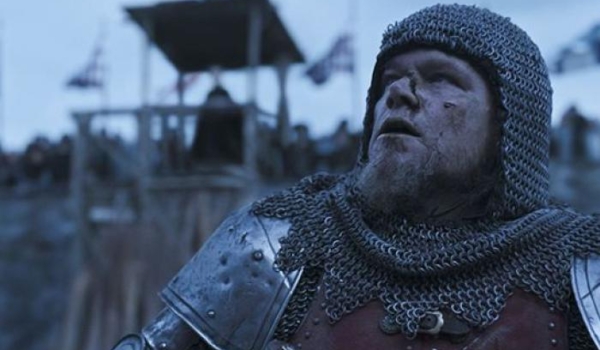 The trailer for The Last Duel (2021) dropped recently, and while there haven’t been a lot of promotional shots showing the costumes, we thought it was worth mentioning since it’s shaping up to be a hot ticket film, what with Adam Driver starring opposite Matt Damon.

Set in the 14th century, this film is based on a true story of the last trial by combat in the Kingdom of France. The precipitating event leading up to the duel between Jean de Carrouges (Matt Damon), a knight from Normandy, and his neighbor and fellow knight, Jacques Le Gris (Adam Driver) was Carrouges’ wife’s alleged rape by Le Gris. After escalating the matter up to the Count d’Alençon but finding no recourse after Alençon effectively pardoned Le Gris without bothering to hear Carrouges’ wife’s testimony, Carrouges takes it upon himself to visit the King of France to appeal his case and call for a judicial duel to resolve the matter. I won’t go too much deeper into the actual history at this point, because I haven’t seen the film yet and can’t comment on how closely it follows the historical events, but suffice it to say, a duel gets fought and one of them dies.

What I do find interesting enough to mention, is that this is film was produced by Ridely Scott, who was also known for another dueling film at the start of his career, the impeccably researched The Duelists (1977). Now, as a producer, Scott seems less concerned with meticulous historical accuracy than he was as a director, and the costume photos I’ve found of The Last Duel bear this out. There’s some serious What the Frock? choices being made: 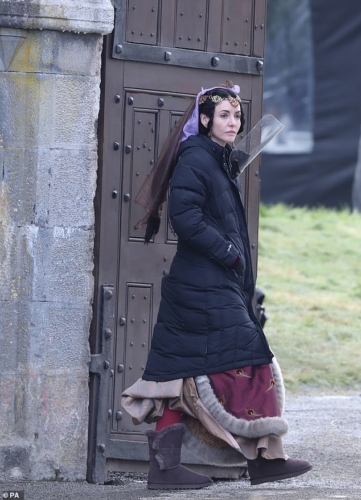 There’s at least one head necklace (ignore the puffy jacket and Uggs, clearly this is a behind-the-scenes shot). 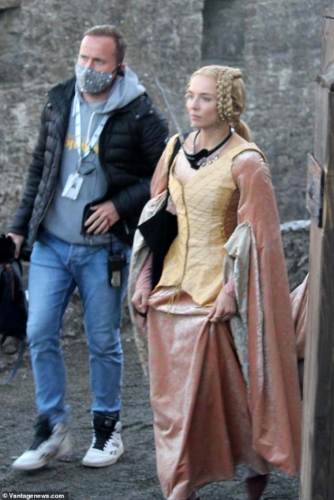 There’s panné velvet and a thoroughly debunked “jacket” that is based on a complete misunderstanding of 14th-century construction that dates to the Victorian era. So, that’s cool. 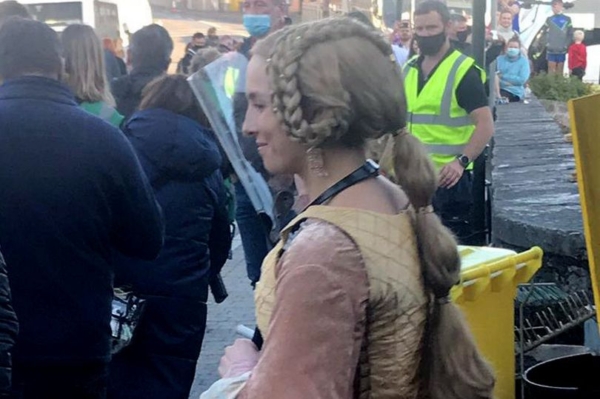 Noting the interesting hair for Kendra! 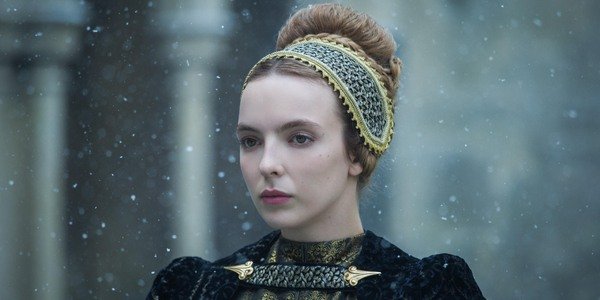 This hat … thing … is not at all something you’d find in the 14th century, but I’m not mad about it. At least her hair is up and sorta covered.

This looks possibly like the only “interesting” dress in the film, but the cleavage and the beachy waves … I guess wimples are too ugly for modern audiences. Don’t tell Sophie Marceau. 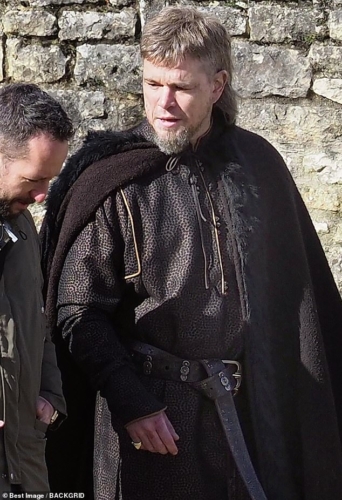 We have Matt Damon in embossed… leather? Sure, whatever. 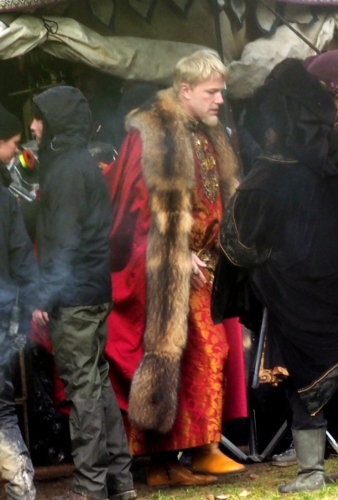 Ben Affleck as the Count. Pretty much everything looks good here, right down to his shoes. Also, digging him as a blond! 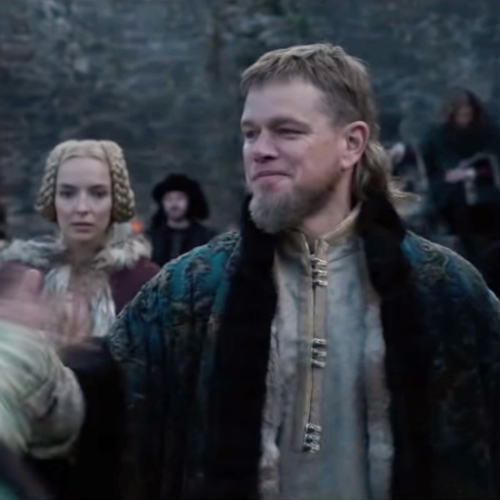 This costume isn’t terrible! I don’t hate it! 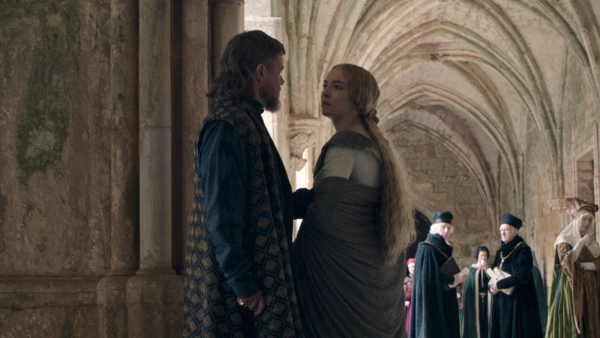 Wait. Matt Damon has a MULLET??? GQ even brought in a “historical hair expert” to tell us that, nah fam, it’s cool, the “medieval mullet” is totes historically accurate. I really want to see their documentation. 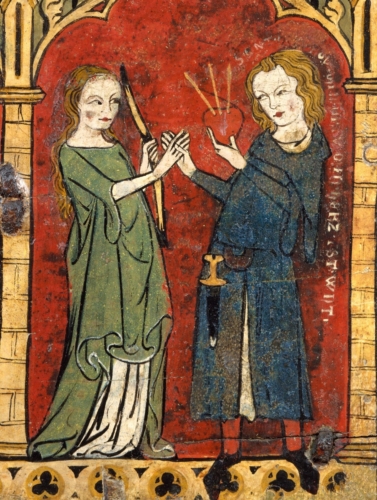 Long and flow-y? Yes. Business up front, party in the back? No.

I’m filing this film away for my next installment of “Films With Extras Dressed Better than the Lead Actors.” 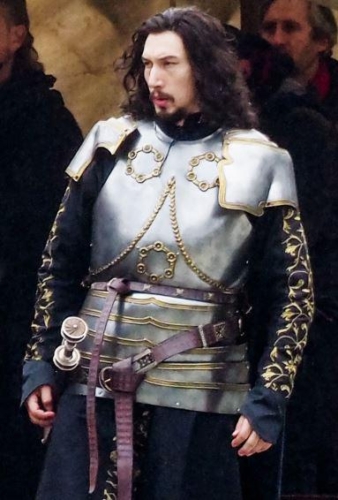 Adam Driver in the least-flattering suit of armor I’ve ever seen … Nice belts, though.

And speaking of armor … Now, I am not by any means an armor specialist. We have tried numerous times to recruit someone to come and actually do an overview of good and bad armor on film, but apparently we can’t manage to entice anyone with any kind of armor historian credentials, so I’ll be honest and say, maybe I’m wrong. Maybe this is based on some archaic helm from the era, and I’m just talking out of my ass. But seriously… 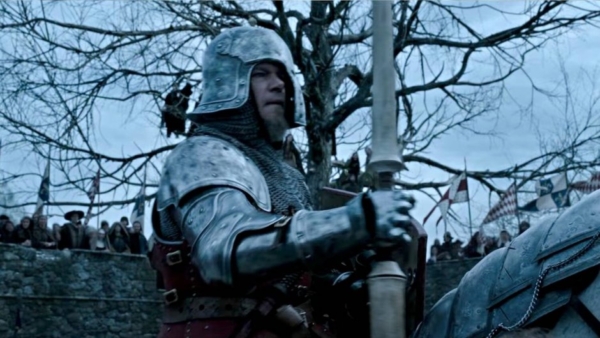 The fuck is this half-face helmet fuckery?

This guy seems to know what he’s talking about, so since we don’t have our own in-house armor expert to weigh in, I’m going to use him as our stunt expert:

I mean, really, we all know the “perfectly reasonable explanation for it” is almost entirely the result of having to figure out a way to show the audiences which actor is which, allowing them to emote and whatnot (although Adam Driver emoted just fine from behind a full mask as Kylo Ren, I’m just saying).

This commenter knows what’s up, though.

Anyway, we will be seeing the film when it comes out, so rest assured there will be more said on all of these topics.

Will you be watching The Last Duel?