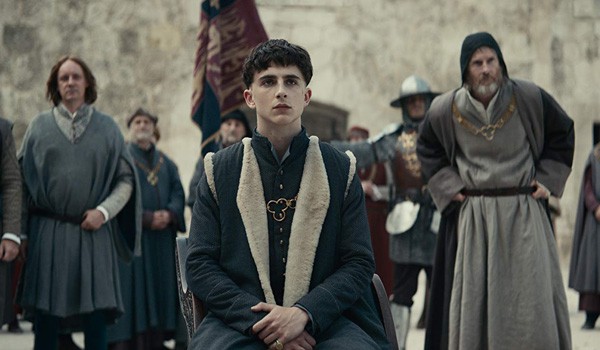 I was all set to drool over Timothée Chalamet in The King (2019) because he’s totally my type of prettyboy, despite him being younger than my college degree. But Netflix’s movie loosely based on Shakespeare’s Henry IV and Henry V plays (which are loosely based in history) bored the hell out of me after 15 minutes, and were it not that I’d already scheduled this review, I’d have consigned it the Oh the Bad Movies You’ll Watch category and gone on my merry way. Instead, I tried to watch while mostly shopping online and grabbing screencaps. Here are five things I came away with from The King…

There’s a lot of toxic masculinity at play. Lords and vassals bickering, fathers and sons bickering, brothers bickering, rival kings bickering. Plus battles. So much boy vs. boy and not in a hot gay sex fashion. At least Shakespeare’s Henriad doctors up this stuff with some pretty language that’s more ‘band of brothers’ than ‘boys will be boys.’ 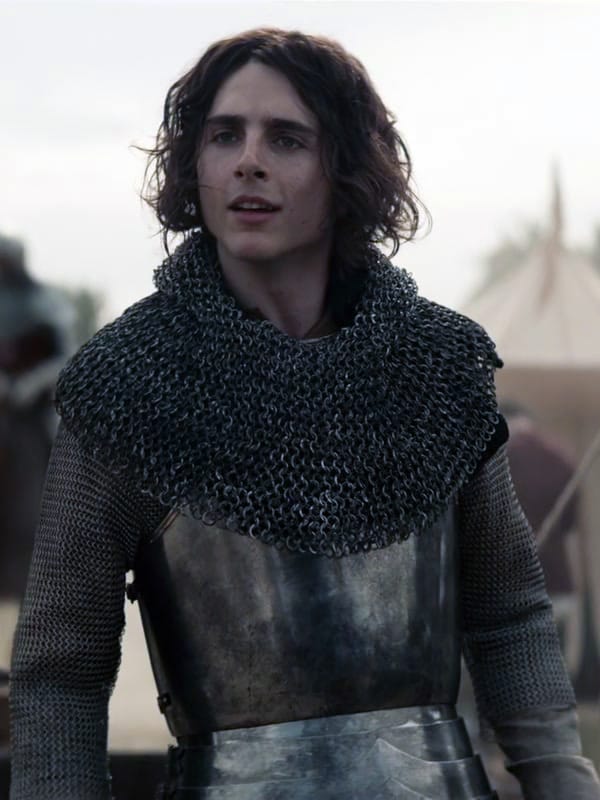 It’s weird having Timothée Chalamet at the helm because he’s so NOT a typical macho manly man leading man type, what with his scrawny, pouty, emo boi style. So a lot of the boy stuff comes off as winey, and that’s worse. 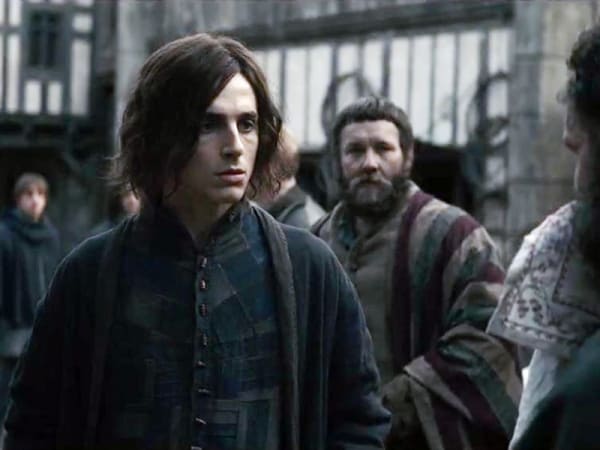 The movie starts with a title card saying “early 15th century,” and I guess that’s a hint that the costuming will be vaguely in the period. The shapes and materials are kind of there, but the costumes have that stripped down ‘jeans-and-T-shirt’ aesthetic that some costume designers are doing because they think it makes historical costumes look ‘modern.’ Which is dumb because, HELLO, historical costumes shouldn’t look modern. headdesk

In Fashionista, costume designer Jane Petrie talked about the blue colors she used for Chalamet:

“It was indigo, which was available at the time, and had a feel of a cool denim jacket or something. It was washed through and all this texture allowed me to break down and make it look worn, as though it was something he went out in to party.”

The references to a denim jacket and going to a party — she’s just modernizing the whole thing. Color me annoyed. 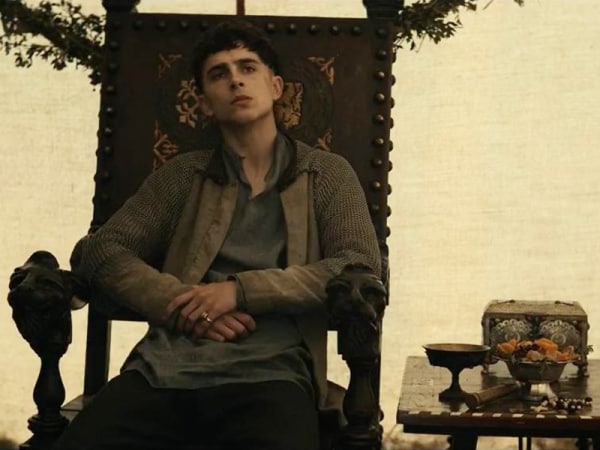 I guess that’s supposed to be chainmail? It looks like a cardigan & shirt from the Gap. 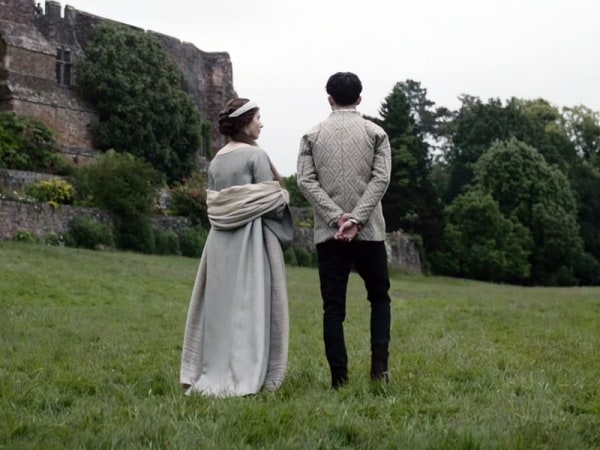 3. The headdresses and the hair

Yeah, everyone noticed this in the trailers. You pin your hair up underneath an elaborate veiled headdress. Heck, underneath most any hat until the hats get tiny. A big hat and veil combo is meant to cover all the hair. That’s kind of the whole point of the thing. 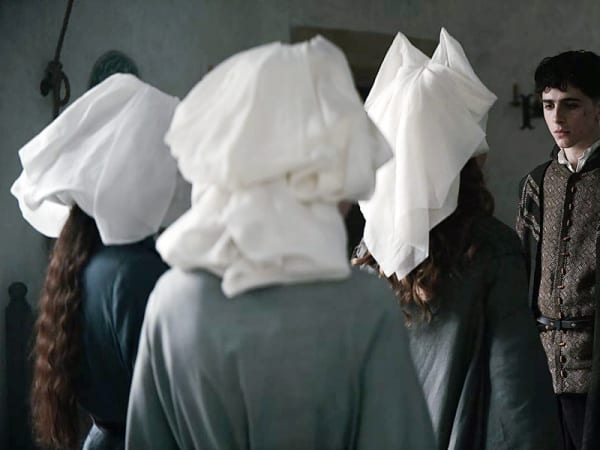 Though the headdresses look nice in and of themselves. Apparently, Petrie had wanted to do this for a while. In Fashionista, she describes this:

“I’ve had a little personal project going on for years and years and years and I was waiting for those women to come into my life one day,” explains the costume designer, who has been sculpting medieval headpieces with linen and wallpaper paste at home. Relieved that [director and co-writer David] Michôd was open to the idea, which could be distracting if not done properly, Petrie enlisted a milliner to bring her DIY experiments to the screen. “She did exactly what was in my head,” Petrie says.

I’m a little horrified by the idea of linen and wallpaper paste — historically, they’re just draped veils held with pins, and some of the more elaborate ones would be draped over a wire frame. I’m imagining Petrie making something crunchy like a very angular, pointy helmet. Ouch! Thankfully, she got a real milliner in there. 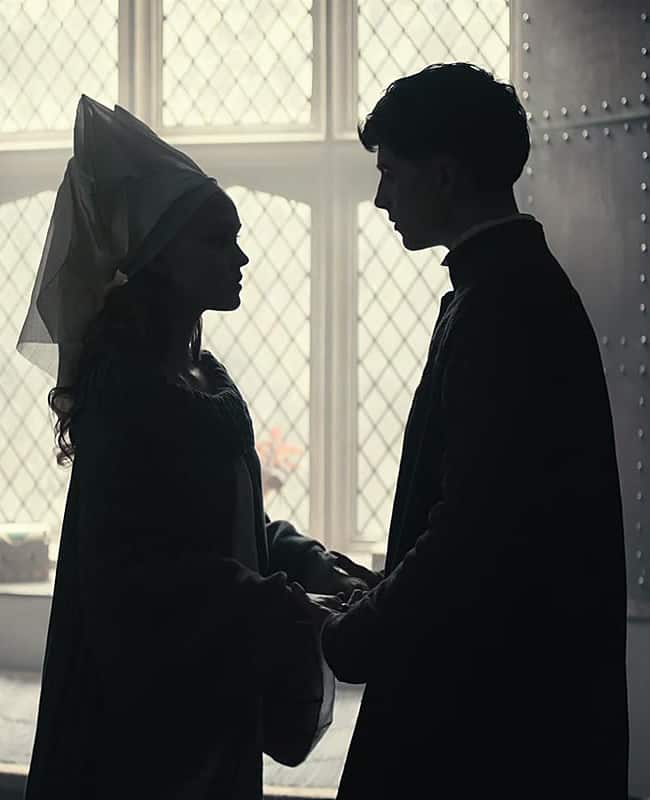 Even in silhouette, you can see Catherine’s hair hanging down.

Oh Robert Pattinson, please don’t do a French accent again! He plays The Dauphin, and he sounds like Inspector Clouseau. I get that he’s supposed to be the bad guy and a ridiculous character, but lordy he’s OTT. 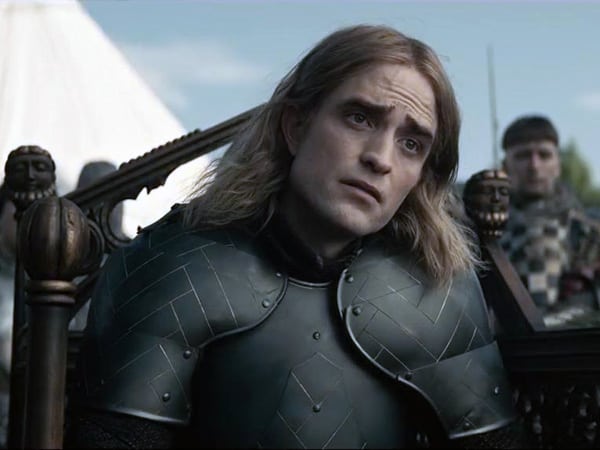 Runner up on the weird accents is the Archbishop of Canterbury with a lisp who just reminds me of the priest in The Princess Bride. 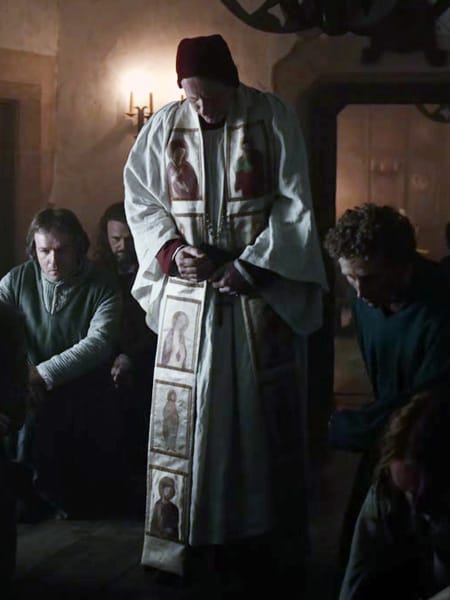 Also, I found the pasted-on-icons look of his robe weird, but I’m so bored by this movie that I don’t want to bother looking up ecclesiastical fashions of the 15th-c. Feel free to discuss the accuracy of this in the comments! 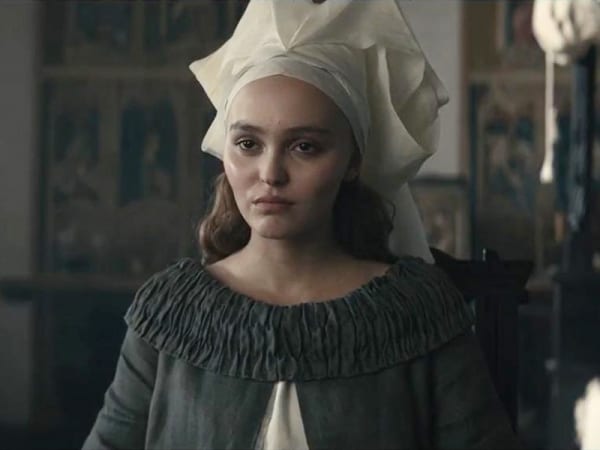 The other side of #1 is that we only meet two women. At Hal’s coronation feast, his sister, Philippa, Queen of Denmark, shows up for a chat. 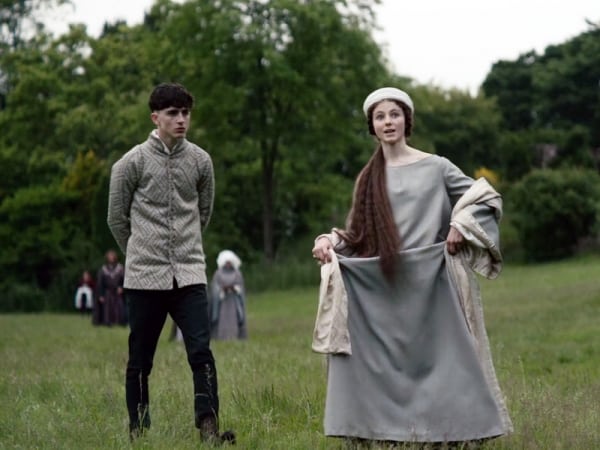 Who doesn’t love a woman in a giant unadorned sack? Also, skirt hiking, my favorite!

Then at the very end, Hal meets Catherine of Valois, who is presented as his prize for conquering France. But Catherine calls Hal on his shit, puncturing the male ego he’d inflated during the previous 70 minutes since his father died. It may be the best piece of dialogue in the whole movie. 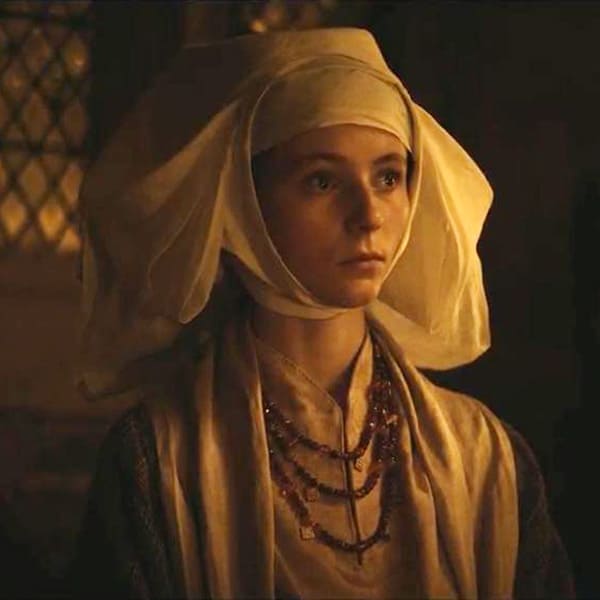 And since there are so few women, I can’t say much about their costumes. More of the stripped-down look, and here Jane Petrie’s excuse is that the fancy headdress was the focus (I guess she thinks modern audiences can’t take in too much detail, ugh):

“I thought the best way to not steal from it [the headdress] and clutter it up was to keep the rest of the clothing just clean and simple, but for there to be a lot of it. So the sleeves are huge and pooled into tiny, tiny little cartridge pleats on the cuff. We were just very plush with the amount of cloth, but we kept it to calm colors and calm shapes and not really any decoration on it at all.” — Fashionista 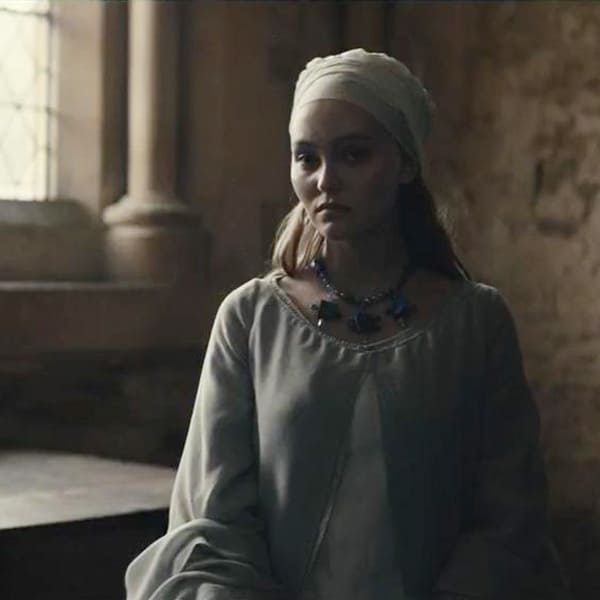 What did you take away from The King?