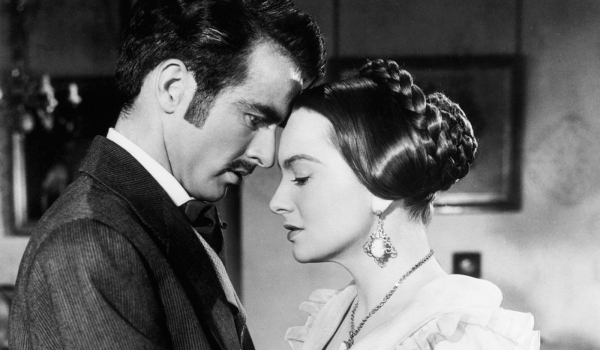 With Olivia de Havilland‘s passing this last Sunday, I decided it was high time to dust off one of my favorite of her films, The Heiress (1949). This film was kind of seminal for me, as the first time I saw it was right after a particularly painful breakup, so the theme of the young woman done wrong really resonated. The thing that made this film even better, however, was fact that the film is set in the 1850s, which makes this fairly modern twist on girl-done-wrong really work. And the stunning costumes, designed by Edith Head, don’t hurt, either. Edith Head’s sketch for one of Catherine’s gowns. One of Olivia de Havilland’s gowns from the film.

Olivia de Havilland would earn her second Best Actress Oscar playing Catherine Sloper, a plain, shy young woman who is the daughter of an incredibly wealthy and all-around asshole father, played by Ralph Richardson. She spends her days pretty much shit on by her father, who thinks she’s weak and simple-minded, and who is worried about those qualities making her vulnerable to fortune-seeking shitheel suitors who are just out to marry her for her money. So, Catherine, a burden to her father and burdened by her inheritance, spends her days embroidering and trying to be a loyal daughter to her jerkface dad while dreaming of the liberation of falling in love with someone who really understands her. Very soon, she comes of age and inherits a ridiculous amount of money from her mother’s estate. Enter Morris Townsend (Montgomery Clift), a handsome young swain, who appears to genuinely appreciate Catherine for who she is. Under his attention, she blossoms into a confident, beautiful woman, and the two fall in love. That is, until Dr. Sloper intervenes in his daughter’s love life and threatens to disinherit her from the rest of her massive fortune if the two marry, because he is 100% convinced that Townsend is only after his daughter’s money. Determined to pursue happiness, Catherine and Townsend make plans to elope, and she reveals to him that she will lose her fortune if they wed, but Townsend professes his love for her regardless. The plans for the elopement go forward, and Catherine packs her bags and waits for Townsend to whisk her away into marital happiness, but he never appears, because dun dun duuuun, he’s exactly the douchebag gold-digger her father warned her he was. It’s right about here that I was expecting the film to wrap up, with some moralistic patriarchal bullshit about female virtue or whatever, but what happens next turned that trope on its ear. Catherine goes back to her father, colder, hardened, and sets about caring for him as he dies. She even dares him to disinherit her after admitting she still loves Townsend and, once Dr. Sloper is dead, she could freely pursue him and Daddy’s precious fortune would be squandered by the sentient bag of dicks that is Morris Townsend. Dr. Sloper does not disinherit her, though … He dies, leaving his massive fortune to her, and suddenly, Catherine is rich as fuck. Years pass, and Catherine chooses to remain unmarried, working on her embroidery and waiting, knowing that she probably hasn’t seen the last of Townsend. Sure enough, he reappears in her life, dirt poor and full of protestations of love. Catherine, apparently swayed by his change of heart, agrees to recreate their failed elopement plans from years earlier. She asks him to meet her and they will run away and live happily ever after off of her giant pile of cash. As a promissory, she gives him a ruby button and tells him she will go with him when he returns that night… Will they live happily ever after…?

But to find out how the entire film actually ends, I’d rather you just watch The Heiress and tell me what you think in the comments.