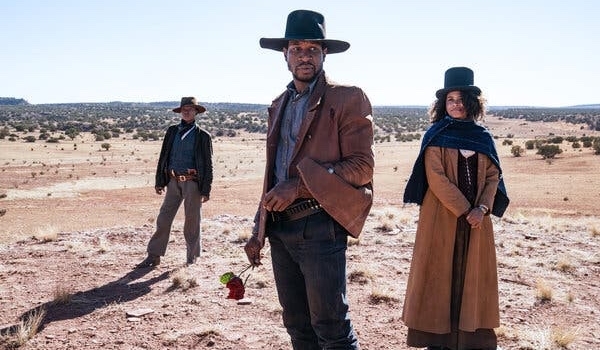 You’ve probably heard about The Harder They Fall (2021), the new western film with a primarily Black cast that just premiered on Netflix. Starring Idris Elba and and Jonathan Majors, it’s an entertainingly stylized take on the genre. Don’t expect any prairie bonnets here, people!

Overall, I’d say the movie was a fun watch, even if some of the characters’ choices seemed questionable. There were fun plot twists, a sparky script, and a WHOLE LOT OF PRETTY of nearly all gender presentations. Most important, however, is the representation of Black people in American history — specifically, the “old west” — that so many news stories have focused on. Most of the main and supporting characters were real African Americans who lived and lawed or outlawed in the American west — although the story is entirely fictionalized. I kind of raised my eyebrows at that fictionalization, although I decided that even KNOWING about Stagecoach Mary or Bass Reeves (I’d only heard of the latter) was pretty cool. And for any numb-nut who says, “dur, you can’t make a Black western,” having real historical figures to point to just MIGHT shut them up?

There’s been a lot of articles about these historical figures, like these in the LA Times and Time magazine, as well as a great History Extra podcast episode that also talks about the history of the “Black Western.” There’s also some interesting queer representation, which we’ll talk about, costume-wise, in a moment. On the other hand, there’s also been some critiques, particularly of the specifics of the casting — for example, Stagecoach Mary should be dark skinned and much older and wider than the actress who portrays her.

Now, let’s look at the costumes and how the designer worked on the historical angle! They were designed by Antoinette Messam, who has an extensive resume although nothing obviously historical. Of course, the film’s costumes aren’t meant to be strictly historical. Messam said,

“At the end of the day, [director] Jeymes [Samuel] did not want to make a dusty old cowboy movie — he wanted it to look alive, he wanted it to have swagger, for it to be fun and funky. And, believe it or not, if you look at some of my research, this wasn’t a stretch — these people had style, they dressed well. The way they wore their clothes, they made it their own” (The Harder They Fall’s Antoinette Messam on what it takes to make it as a costume designer).

According to an article in Variety, “the film is not a historical reenactment” and Messam was given “free rein to use influences that would enhance her designs rather than be period-accurate” (‘The Harder They Fall’: Indigo and Denim Rule in Jeymes Samuel’s Western). This makes sense for this film, because again, the goal is not to teach about history, but to update the Black Western AND to tweak the standard Western film. 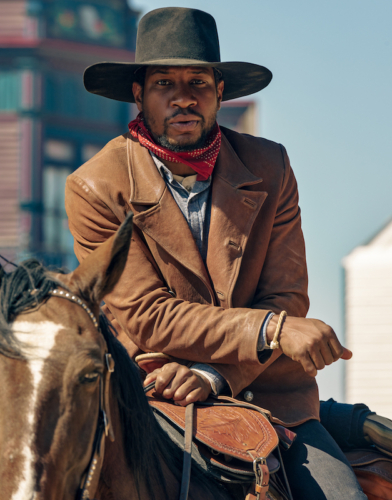 That being said, Messam did her research, focusing on the period 1870-90 and denim. According to an interview in L’Officiel,

“The workwear material is used throughout the principal cast’s wardrobe, seen as jackets, button downs, skirts, and, of course, blue jeans. Messam specifically made a pair of jeans for [lead Jonathan] Majors from a pattern accurate to the Victorian period” (‘The Harder They Fall’ Costumes Help Highlight the History of Black Cowboys).

She also talks about how Regina King’s long denim coat was copied from the “silhouette of a British Victorian riding coat and just tweaked it a little bit with more flair, more swagger. Instead of one pleat at the back, we did a little pleat with a little kick” (The Harder They Fall’s Costumes Are A Potted History Of The Yeehaw Agenda). Messam cites two different books in interviews, Jeans of the Old West and The Black West, although she also drew from more contemporary inspirations. 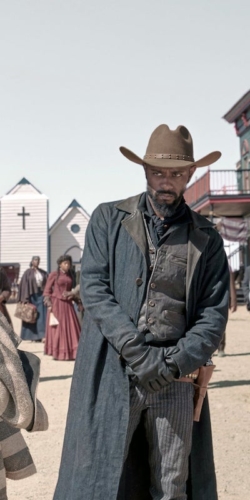 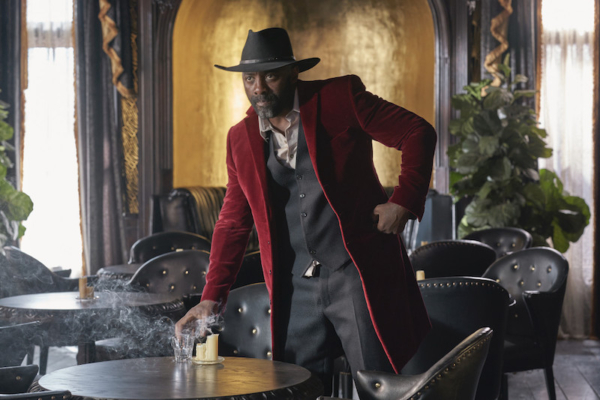 This red jacket (by fashion designer Ozwald Boateng) was one of the more contemporary pieces, and it was GORgeous on screen.

Almost every costume piece worn on screen was built (in multiples) from scratch, although there are a few designer pieces worked in (The Harder They Fall’s Antoinette Messam on what it takes to make it as a costume designer). And, this was all happening during COVID-19; Messam recalled,

“There were times when I didn’t know where I was going to get needles because the only store open in the town where we were working was Walmart. [Otherwise] you had to FedEx it in. I was lucky to be able to access the Santa Fe Opera. They helped us so much. I couldn’t even get fabric, I shipped it in!” (The Harder They Fall’s Costumes Are A Potted History Of The Yeehaw Agenda).

Of course, my main interest was in the female characters. Stagecoach Mary (Zazie Beetz) is portrayed as a saloon owner and singer who previously ran with one of the outlaw gangs; Trudy Smith (Regina King) is all outlaw, all the time.

Mary’s looks are all corseted, emphasizing her femininity and sex appeal. According to Messam, “When we first see her, it’s important to show her in the attire of a saloon” (‘They’re not cookie-cutter’: dressing the black cowboys of The Harder They Fall). And yeah, that first look is very modern, with a corset worn without apparent chemise as a bodice rather than underwear. The designer stated,

“I broke every rule. My head cutter who built the clothes said, ‘You realise you’re putting Zazie in underwear as outerwear?’ and I’m like, ‘Yeah’ … The red is a two-piece, not a dress — that’s a corset. She loved how it cinched her in. But she’s basically wearing underwear!”

— which, is definitely breaking rules by 19th-century standards, but pretty par for the course for film today (The Harder They Fall’s Costumes Are A Potted History Of The Yeehaw Agenda). 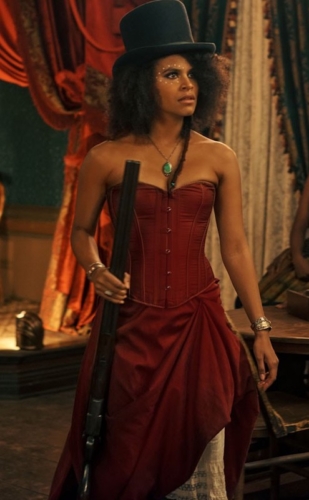 The hat and the makeup are interesting; the corset/skirt combo feels like your standard steampunk ensemble. I mean, it WORKED for the character and the film, it’s just nothing new to me. 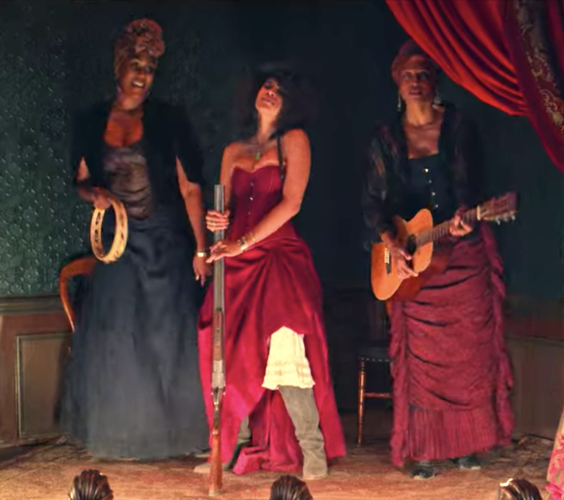 I liked the band members’ costumes better, especially the headwraps, which have been very typical of African/African American female dress for centuries.

Later, Mary wears a much more practical ensemble for riding: “she’s dressed to go out on the plains … her dress is split, so that she can straddle a horse, not sit side-saddle, which was common at the time” (‘They’re not cookie-cutter’: dressing the black cowboys of The Harder They Fall). Her top hat (the director’s choice) and the various layers she wears absolutely brings in elements of masculine dress:

Nonetheless, that vest is boned, which Messam said was to “give her that feminine silhouette” (‘The Harder They Fall’ Costumes Help Highlight the History of Black Cowboys). 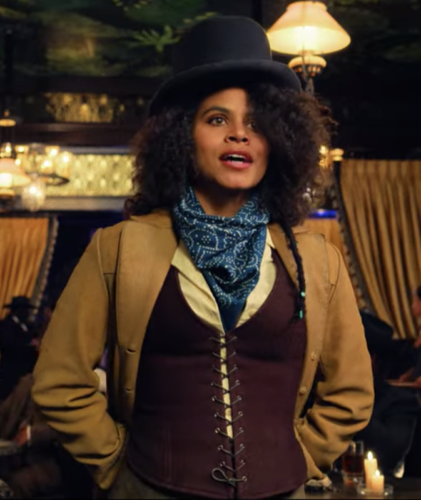 Making sure she looks sexy while she’s being badass.

Trudy’s look is generally less sexy, more practical, although she still has moments of (tailored) femininity, and she’s no frump. This suits her character, as she’s a very strong leader within her outlaw gang (“Obviously you don’t know me,” she fabulously states to a male character who underestimates her). When she’s on the job, she wears trousers, long jackets, and her trademark bowler — although generally with a simple but lacy blouse. Messam declared,

“’I didn’t need to beat it over the head that they [the female characters] were strong with their costumes. It was important to show that as a woman and a boss, Trudy didn’t have to dress like a man.’ Thus, touches of lace add a feminine edge to her wardrobe. A white lace Ralph Lauren blouse, one of the few sourced pieces among the mostly custom-made costumes throughout the film, contrasts with her fitted leather jacket and gloves; a lace scarf worn around her head peeks from under her bowler hat [again, chosen by the director as contrast to Mary, and another masculine style]” (‘The Harder They Fall’ Costumes Help Highlight the History of Black Cowboys). 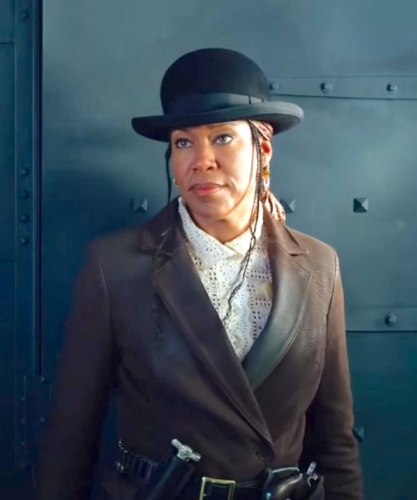 Lots of masculine styles contrasted with that eyelet blouse. 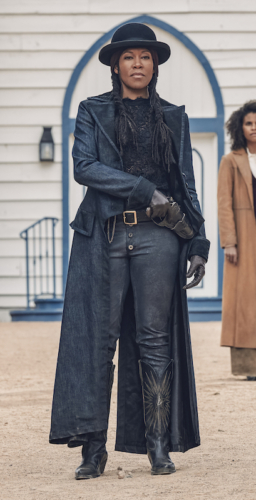 Trousers, denim, and a long coat — plus her trademark bowler | CR: DAVID LEE/NETFLIX © 2021 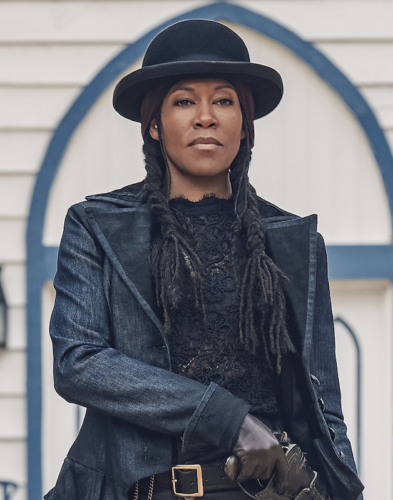 But note her top is actually black lace!

When Trudy does get girly, she wears relatively simply cut, tailored dresses without bustles — although surprisingly, with long trains: 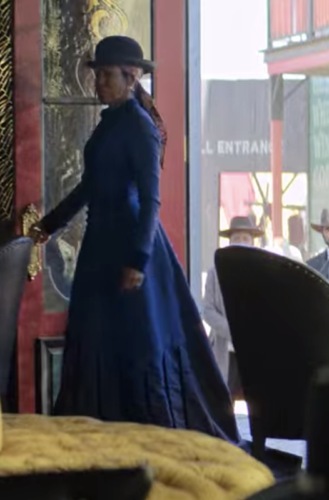 Can you see the train behind the chair leg? 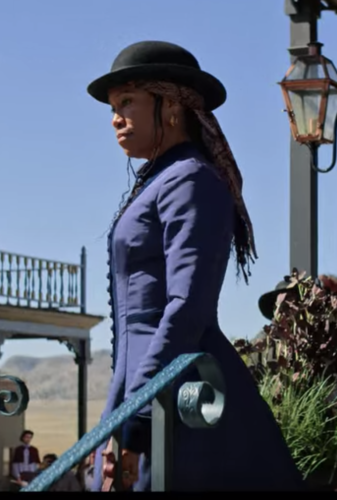 Simple silhouette — which dates it to about 1879-80, unless she’s just being iconoclastic, which is possible. 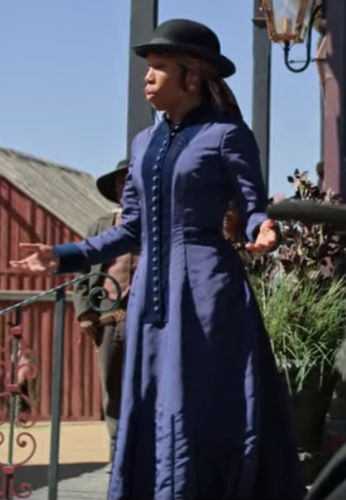 The inset on the bodice with matching cuffs and trim on the skirt are PERFECT for the era. 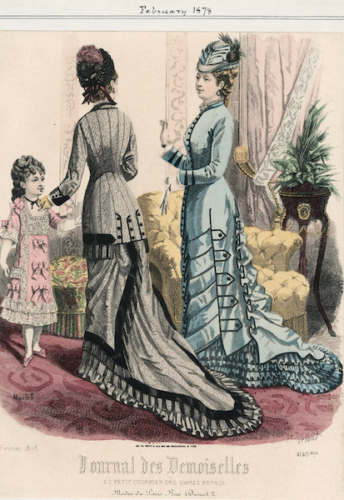 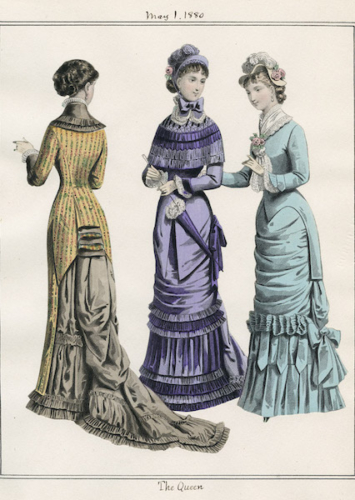 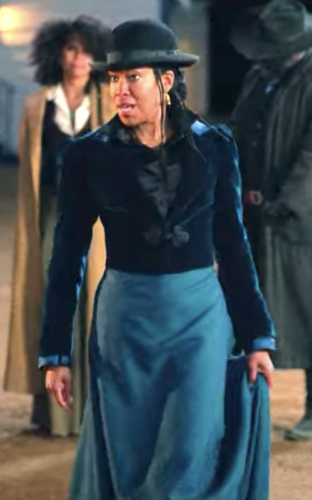 Another feminine look — still very simple and tailored, and this time a more contemporary look. 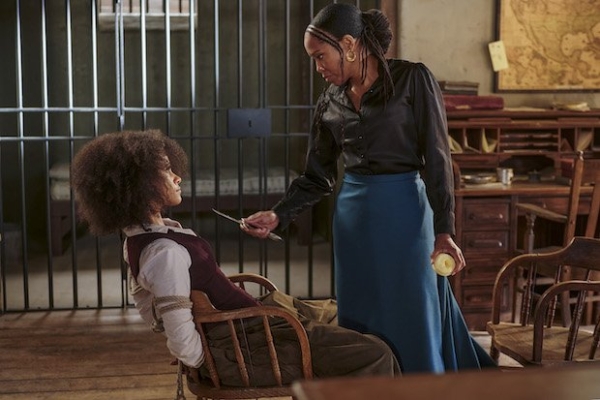 I do feel like that blouse is from Talbot’s.

One of the most interesting characters is Cuffee, a masculine-dressing person who appears to be biologically female. According to the designer,

“The intent wasn’t to hide her female identity. ‘That’s just how she dressed. I was trying to find the beat where she came across as a boy because that was her choice, but it’s not like she was trying to hide that she was a woman’” (‘The Harder They Fall’ Costumes Help Highlight the History of Black Cowboys).

In another interview, Messam explained,

“‘In doing my research and coming across a woman who dressed non-binary, as we would call it now, it looked to me like it was mostly for practical reasons.’ Cuffee is clearly more comfortable in a man’s suit than a skirt. ‘To be taken seriously, that’s what worked for her. If she was going to knock somebody out, it was better that she was wearing pants and a jacket” (‘They’re not cookie-cutter’: dressing the black cowboys of The Harder They Fall). 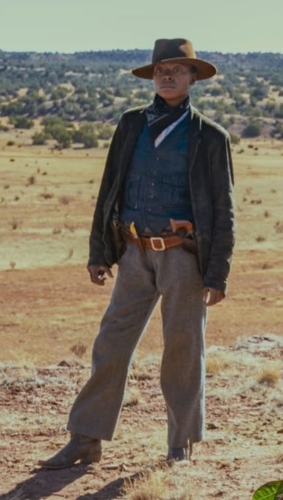 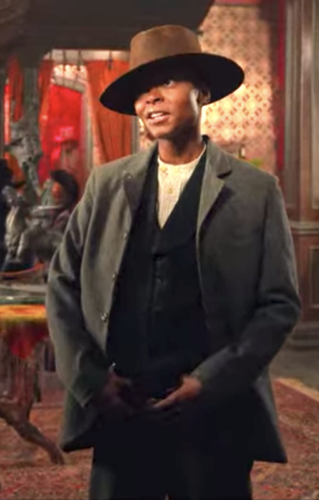 So, don’t go to The Harder They Fall looking for any real historical accuracy, but do go to see well-designed costumes that suit the characters and, most importantly, the themes of the film. And keep your eyes peeled for my biggest irritation, this Battenberg lace parasol that pops up in multiple scenes: 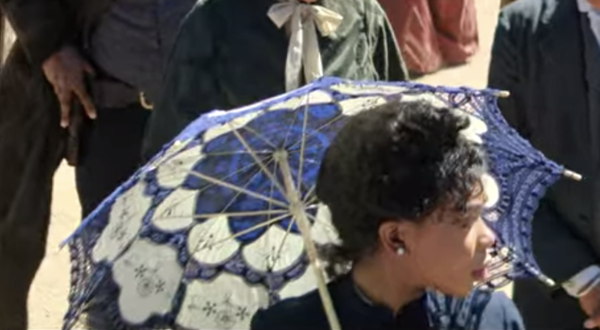 One of my nemeses!

Have you seen The Harder They Fall? What’s your take?