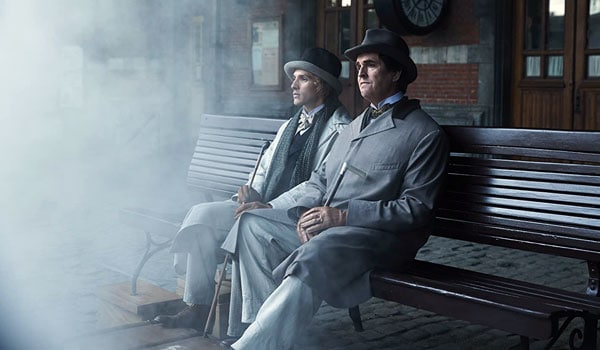 The final years of Oscar Wilde‘s life weren’t joyful, but Rupert Everett — who wrote, directed, and stars in The Happy Prince (2018) — finds the artistic beauty in this tragedy. It’s an appropriate tribute to the poet and aesthete whose tragic flaw was a love of beauty.

The movie shows Wilde in all his witty, gluttonous, charming, self-destructive glory, as he takes up with Parisian street hustlers and flashes back to his ruinous affair with Lord Alfred “Bosie” Douglas that lead to his imprisonment and which he resumed afterwards to yet more heartbreak. There’s not a lot of story, really, but it’s only three years from when Wilde was released from prison until his death at 46. Hard labor broke his body, if not his spirit. In the film, he wanders Italy with Bosie, enjoying a brief return to decadence, narrated by Everett’s elegiac voiceovers of Wilde’s own words. Everett said in the Tatler of the relationship:

“Oscar thought he loved Bosie – Lord Alfred Douglas – with whom he had an ill-fated, tempestuous affair. Actually, it wasn’t love, it was self-destructive desire, something we have all felt at one time or other: the urge to throw ourselves off a cliff, a kind of panic that makes you want to fuck it all up. Most people can stop themselves, whereas Wilde surrendered to that emotion, and it sealed his fate.”

While the film is gorgeously atmospheric and lovingly shot in Bavaria and Naples, there’s not a lot to talk about in terms of costumes. Just degrees of 1890s menswear, all impeccably done by Maurizio Millenotti (Hamlet, The Importance of Being Earnest) and Giovanni Casalnuovo. Rupert Everett wears a fat suit and makeup to recreate the haggard post-prison appearance of Wilde according to the Radio Times. At the start of the film & end of Wilde’s life, Everett looks like this.

In the Daily Actor, Everett further described his process:

“For me, it was important to try and find the look of the character, really, before anything else. I felt that once I got that, everything else came with it.

It was very much, for me, to do with finding the silhouette of the character, the kind of elephantine largeness of him. The way he walked and also the shape of his face. I had these fillers inside my mouth to make my face a bit rounder. And this thin, lanky hair, so I shaved my head and had thin wigs that you could see through. That was really it, for the makeup side of it. I wore a corset over my fat suit to pull myself up, and then, I was more or less there.

I always knew I wanted him to have a Charlie Chaplin-esque kind of quality to him, like a rundown local weirdo side to him. I made all the costumes very broken down, with cigarette stubs out on them and things like that. So, it could be a good contrast to him as a star. In one sense, I think it’s like the opposite to ‘A Star is Born,’ it’s ‘A Star is Dead.’ That’s what got me into the character, really.”

This also creates a striking contrast to Colin Morgan’s preternatural beauty as Bosie, and drives home the point of Oscar Wilde’s ill-fated obsessions. OK, sure, there’s a nice costume too.

At the very start of the movie, there’s a flashback to before Wilde’s imprisonment, to a performance of one of his plays in London. It shows how hard he’s fallen in a mere handful of years. Elegant Oscar of the recent past. Playing to a full house — on the right, Mrs. Lydia Arbuthnott (Anna Chancellor), an adoring fan, runs into the downtrodden Wilde much later. The cast is stuffed with stars — Rupert Everett called in a lot of favors!

There’s also the question of communication with Wilde’s estranged wife Constance (Emily Watson), who continued to send him money as long as he promised not to see Bosie. Oscar also wanted to see his two sons, which she denied. She has a surprisingly large role in the film, and we learn what happened to her too.

But off goes Oscar to Italy with Bosie, which is a beautiful, sad, sexy, doomed party of Wilde’s own making. Everett told Collider why he admired Oscar Wilde in spite of how he ended up:

“He carved a new constitution for himself, away from the old one, where the stars were rent boys, petty thieves and street urchins. He made a whole new world for himself, where he wasn’t a victim. I find that amazing about him. He retained his sense of humor. He was still curious about people. One of the god-like things about him is his potential for empathy. He was endlessly being cited for extraordinary empathy with people, apart from being an incredible snob, as well. He’s got so many contrasting things to him, which I find very, very attractive.” How do you feel about The Happy Prince? Happy? Sad?