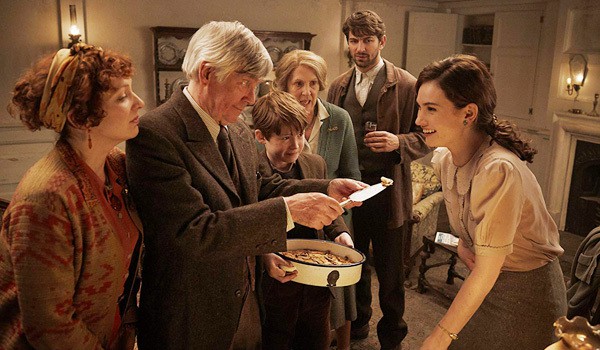 I haven’t read the book of the same name that The Guernsey Literary and Potato Peel Pie Society (2018) was adapted from, but the film did make me want to read books in general and maybe start a book club, just because it was so darn delightful in promoting the communal aspect of discussing books. And as Frock Flicks resident literary nerd, the scene with an intense debate over a fictional biography of Anne Brontë was right up my alley. In fact, I was impressed overall at how this supposed romantic-drama was more about books and the lingering post-traumatic stress of World War II than setting up characters to fall in love (though that happens too). 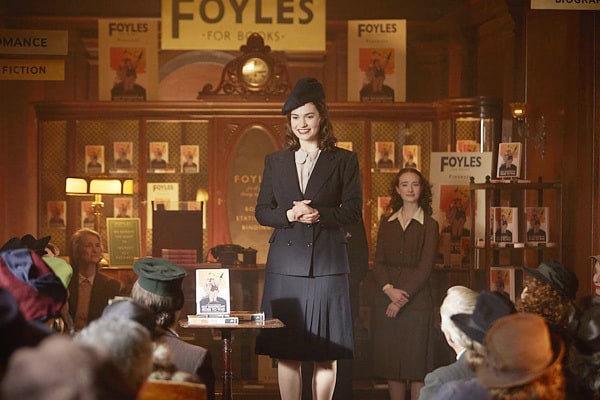 Not to say this is some great cinematic masterpiece, and it’s certainly not the world’s most amazing costume drama. As we often point out, if you can’t get 1940s right onscreen — when there is a vast wealth of original photos and extant garments all around — then you’re just not trying for historical accuracy at all. This movie hits the mark nicely on the costume front. The actors are all pros, with standbys from Downton Abbey like Jessica Brown Findlay, Lily James, Matthew Goode, and Penelope Wilton, among others. 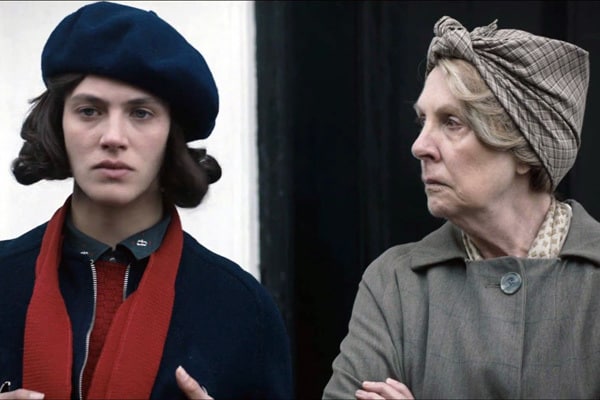 The action revolves around Lily James as author Juliet who is still struggling with the loss of her parents in the war and dealing with a bit of imposter syndrome about her writing. Mathew Goode plays her unobtrusively gay publisher Sidney, very much in the ‘like a brother to her’ fashion. Juliet has a totally random American boyfriend Mark (Glen Powell), who just likes to party, and is so very obviously a poor match. 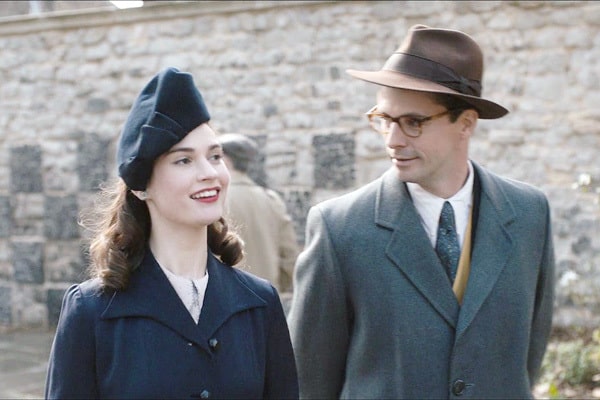 I almost think Lily James could become a better actress if she were given / could choose better scripts because I saw hints of her talents in Guernsey, especially in the early scenes in London. Juliet is a conflicted woman, torn between her own financial success and post-war suffering going on around her, as well as her own emotional suffering. 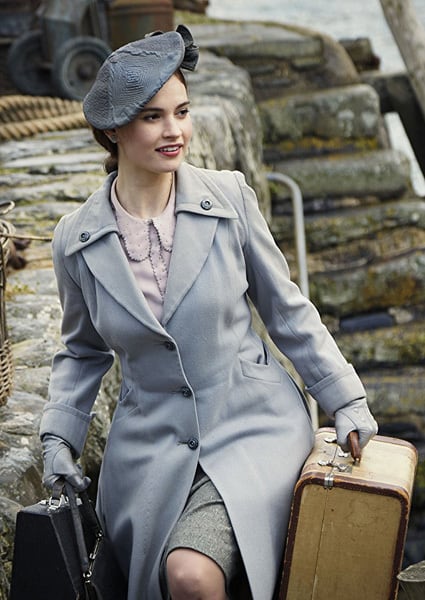 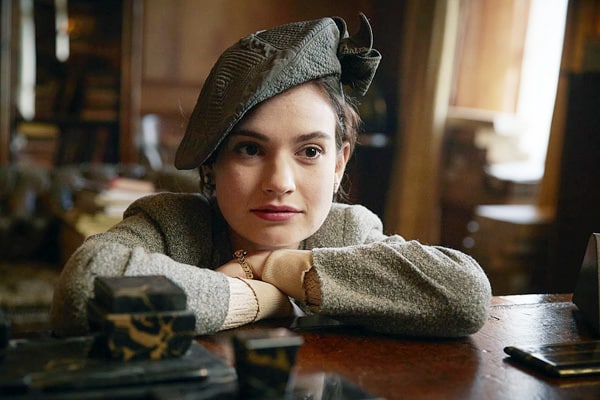 James plays this in slight inflections, and I was most struck at the scene where she’s wearing a stunning yellow-gold evening gown to a party with Mark. The character Juliet doesn’t look comfortable in her own skin with all the grand celebrations. It’s striking because Lily James is a traditionally beautiful woman and usually looks comfortable in evening gowns if you see pictures of her on the red carpet. But in small ways that she moves and how she carries herself in that scene, the character looks uncomfortable and physically unhappy. 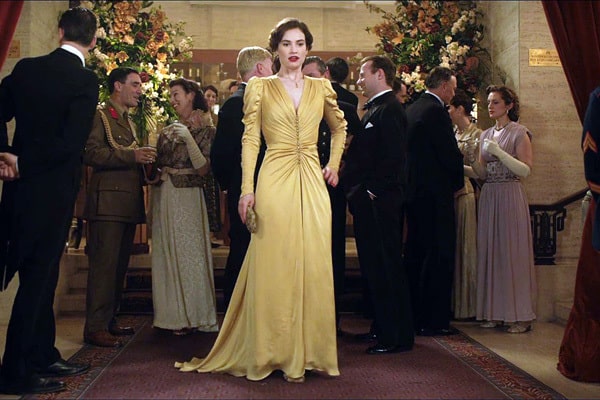 She enters the room awkwardly. 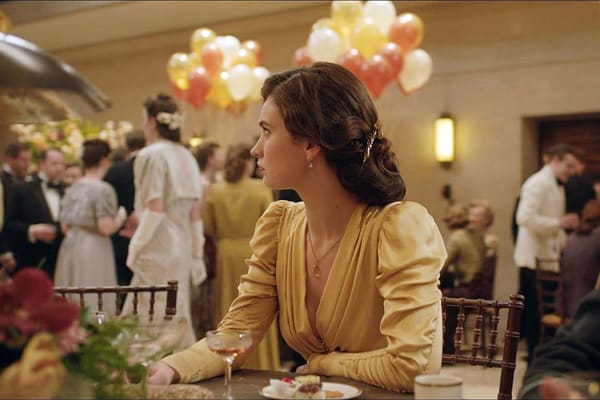 Fidgets and is distracted the whole time. 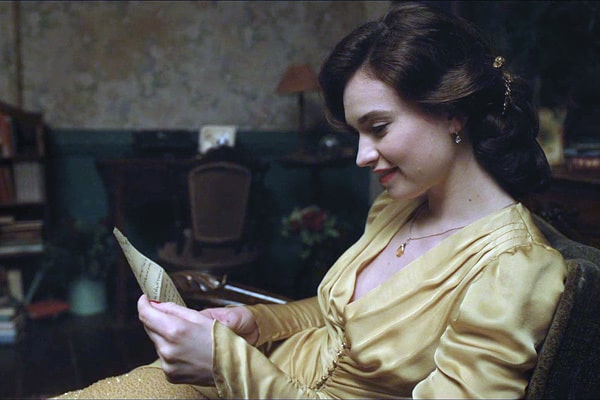 She only relaxes her shoulders and neck when she’s back at her own room when reading a letter about the Guernsey book club.

The rest of the story is both predictable and satisfying in that, as I said, there’s as much emphasis on books, community, and the stresses of the war as there is on romantic entanglements. It’s not simply a meet-cute affair, although I do think that if it had been filmed in the early ’90s, Hugh Grant would have been cast in Michiel Huisman’s Guernsey farmer role. He’s probably the most stock character in the whole flick, and IDK why anyone would fall in love with him specifically. It would have made just as much sense for Juliet to simply take up residence on the island and be friends with the whole lot of ’em because there’s more connections built up around the various members of the society than just her and that guy. Eh, whatevs. 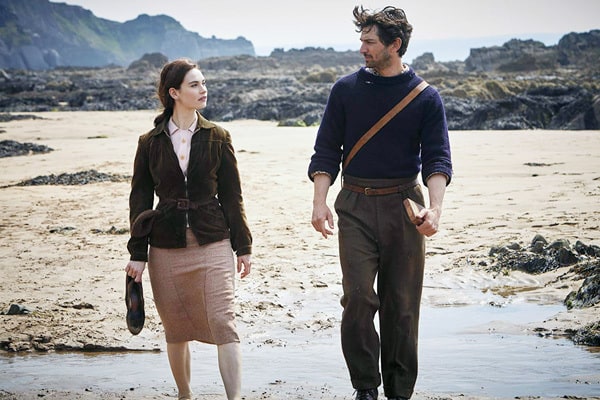 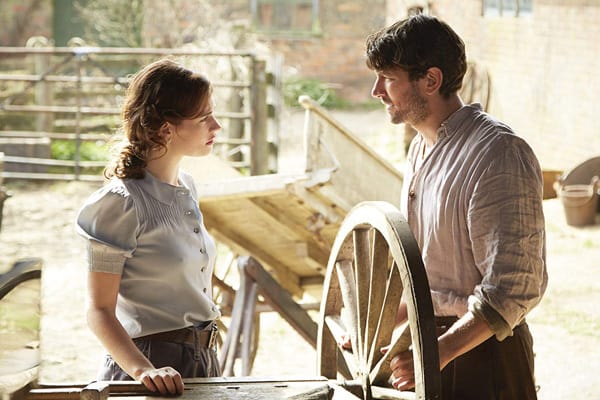 Have you read the book or do you want to now after seeing The Guernsey Literary and Potato Peel Pie Society?