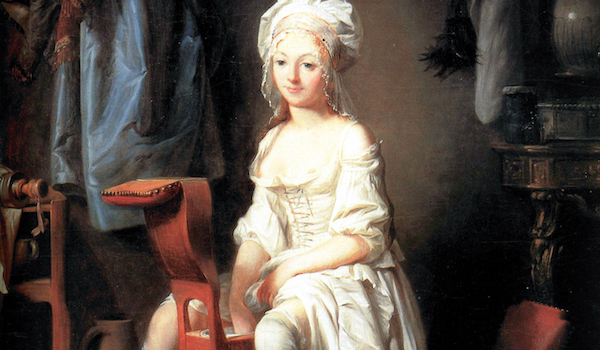 We here at Frock Flicks understand that not everyone cares about historical accuracy in film. Sometimes a movie is just a movie– you’re in it for the fun ride, the escapism, the much needed break from reality. Sometimes you just want to watch pretty people wearing pretty clothes being pretty in pretty locations. We also realize that people have different hot buttons– some of us can’t handle it when costumes are blatantly anachronistic, others hate it when the script chucks the far more interesting history out the window in favor of a storyline that never happened in real life. Movie makers, historical costumers, and historians are frequently on opposite poles when it comes to how the story of a historical person or period should be represented on film. Often, the costumers and historians are silenced because we lack the clout and capital to make ourselves heard. By now we’re all sick and tired of the tired mantra that “people don’t want a history lesson when they go see a movie,” as though there’s something highly distasteful about being exposed to facts instead of made up bullshit about the lives of people who lived before, and that modern audiences have no hope of relating to. I don’t know about you, but I find that mentality hugely insulting.

So it’s when posts like this one by costumer Terry Dresbach crop up, cheerfully regurgitating outrageous misinformation, not just about the clothes worn in a particular period, but about basic life, it makes my blood pressure rise. Terry is the costumer for the new TV series Outlander, based on the novel of the same name by Diana Gabaldon. I can say with all honesty that when I first heard about this show going into production I was intrigued. Photos began to crop up showing that the costumer had a seemingly solid grasp on the 18th-century silhouette, especially challenging because the show focuses on the less affluent and quite sequestered lives of Scottish highlanders in the 1740s. It was shaping up to look like the dark side of Marie Antoinette’s bright world. This, I thought, was going to be worth seeing.

Then Terry had to go and ruin it for me by not just posting inaccurate “facts” about the length of time it took a woman to get dressed in the 1700s (20 minutes to lace a pair of stays is about 15 minutes too long, in my experience), but about hygiene (women only bathed once a year and they bled all over themselves during their periods and they peed freely wherever they wanted because NO UNDERWEAR and EW!) and sanitation (bodily fluids everywhere! No sanitation! Rivers running foul with human excrement!). Basically, in her estimation, the 18th century was a disgusting, foul place that reeked of sewage, and people had to dodge piles of human excrement everywhere they went (sounds a lot like some areas of modern San Francisco, now that I think of it). The point here being that she wasn’t just misinformed, she was flat out wrong. No amount of proclaiming “differing opinions” on these topics, or linking to a “thesis” that supported her inane claims (which turns out to be a post on a Yahoo! Groups forum which was then subjected to several people declaiming the information presented by the author) could change her mind. She even links to a “quickie list of info” which is actually a Listverse post titled “10 Revolting Facts About the 18th Century” to back her so-called research up.

I’m going to stop bashing her and give Terry the benefit of the doubt for a second: She is a costumer, not an academic. She makes pretty clothes. She works hard, she does good work as evidenced by my inclination to even start watching Outlander based solely on the costumes she designed (and we all know what a hardass I am when it comes to costumes). Her post “Getting Dressed” was even pretty great up until the “facts” started. She described how the show’s director wanted to show the entire process of dressing from start to finish, which is definitely a rarity in historical films, and that’s a cool thing I think we all can get behind. If she’d just stopped there, then I wouldn’t be writing this post. Hell, I might be sending people over to her blog to read about how this show could change the role of costuming in movies by legitimizing it as part of the storytelling process, instead of just set dressing.

Nope, instead I’m going to refute the most distressing of her claims with ACTUAL DOCUMENTATION that one can find solely by using the power of Google, and by actual personal experience being a historical costumer and reenactor of going on twenty years now. Because, you know, experimental archeology n’shit.

1.No underwear: Ok, I’ll give her this one on a technicality. MODERN underwear is a concept that originated in the 1920s, necessitated by the fact that fashion for women became considerably more freeing and, actually, masculinized. Wearing bifurcated lower body garments was something that was considered the right of a man since the middle ages. There’s plenty of Feminist theory written about why women were denied the privilege of wearing underwear, but I won’t bore you with it (if you’re interested, look up Jill Fields’ An Intimate Affair: Women, Lingerie, and Sexuality). That said, women did wear multiple layers of petticoats, and having gone commando myself in such a fashion, the added petticoats actually do provide an embracing quality similar to having the legs fully encased in bloomers. Being a modern woman, however, I do prefer to have something on down there mainly for issues of chafing, though I have tucked my inner-most petticoat between my legs which creates a decent barrier against friction burns. It’s not a huge leap in logic to assume 18th-century women did this as well.

2. No bathing: This is absurdly misinformed and is actually pretty straight forward to debunk. Full immersion bathing, like what we modern people think of as “taking a bath” was rare inside the home in the 18th century, mostly due to the sheer amount of labor involved in collecting and heating enough water to sustain a soak. This does not include public baths for men and women being used, however. What was done on a frequent basis within the home (possibly even daily, but for sure weekly) was something akin to a sponge bath. The same sort of bathing still regularly done in hospitals and care facilities on people with limited mobility — Obviously, if it’s hygienic enough for modern medicine, it’s going get the job done for 300 years ago. You can refer to this excerpt of the book Women in Early America by Dorothy A. Mays for more info on 18th-century commoner bathing practices (since the argument was raised that upper classes would have bathed while lower classes wouldn’t have).

3. Menstruation and bleeding everywhere: One only has to look to Wikipedia to find a good starting point for research into how the pre-21st century woman dealt with menses. The entries for tampons and sanitary napkins are of particular note. This topic does appear to be a bit of an information black hole, though. The Museum of Menstruation is frequently cited as a source for evidence that women bled into their clothes, but then the author also offers support for sponges, sanitary napkins, and makeshift tampons being used (also, I really have issues with the non-academic presentation of that site since it is often quoted, and that parts of it haven’t been updated in almost fifteen years is problematic as more research is always being done). I did run across one academic journal article that is freely available on the internet titled “Thy Righteousness Is But a Menstrual Clout: Sanitary practices and prejudices in early modern England” by Sara Read, Ph.D. Read offers the legend of Hypatia pretty quickly in her article, as evidence that “menstrual rags” were known to the Byzantine scholar who was elaborating on the original legend. She also brings up the concept that menstruation was “both taboo and mundane, leading to an apparent lack of contemporary early modern sources.” (pg. 3) The fact that the historical record doesn’t offer a lot to say about menstruation until men started to get involved in trying to regulate it in the 19th century is, in my opinion, neither here nor there. Absence of evidence isn’t necessarily evidence of absence, after all.

4. The smell of menstrual blood was considered erotic: I think this depended on the locale, era, and personal preference of the individual professing to be either aroused or repulsed by the scent of menstrual blood. For every account that decries it as foul, there’s an another source that says it’s an important sign of sexual maturity. It goes back and forth without ever resolving, which is why I think it entirely depends on the individual factors I mentioned above, and this is born out by the book Periods in Pop Culture. I did, however, find an interesting study in the Oxford Journal of Science & Mathematics that looks into the biological factors behind female scent and male attention, so the biological factors involved are independent of culture pressures either way.

5. People doing their business wherever and whenever they felt like it:  Colonial Williamsburg does an admirable job explaining how 18th-century people used the bathroom, so I won’t belabor the point much. Though I will say that while sanitation was not what it is now, sewage pipes have existed in European cities since Roman times. There is truth that many waterways were badly polluted by sewage carried from these pipes, or dumped directly into the river by hand, but that’s also a problem we modern people have to grapple with. In short, it’s not like we’re any better with the whole problem of public sanitation thing than they were 300 years ago.

We will address the clothing misinformation in an upcoming podcast, but I thought it was more effective to address the factual errors about hygiene in the 18th century in a blog post. With sources. Because I know how to use Google.