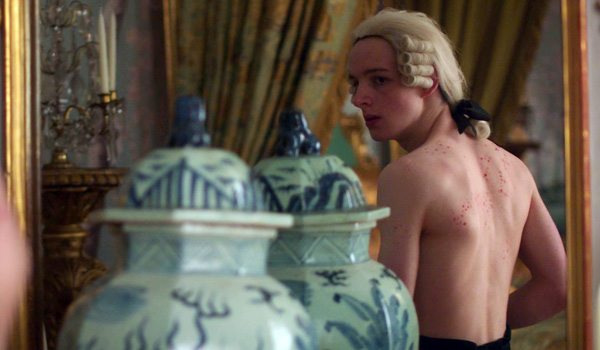 Episode 7 starts off with fine art and ends with the pox. That’s 18th-century Russia for ya! Catherine’s plan to reform Peter and the court into a place of art and science seems to be going OK at first, but it causes problems between her and Leo. 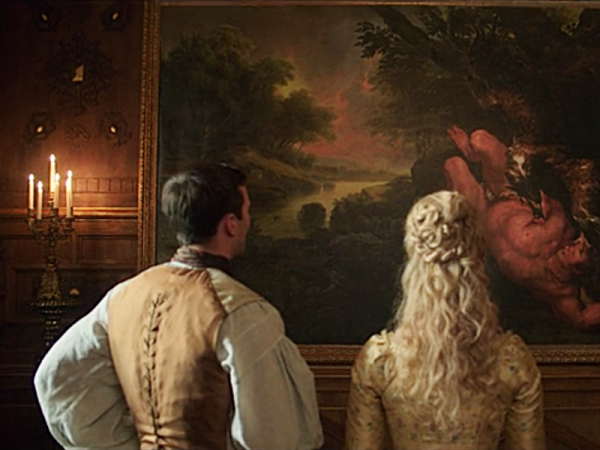 Cathy’s getting lazy with her hairstyle. But at least if Peter is going to run around without a proper coat, he has a back-laced waistcoat. 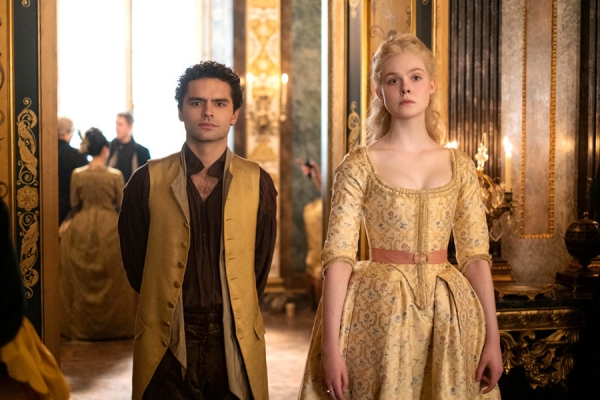 Cathy finally has a new gown! Well, it’s the exact same style as always, but in new fabric — a gorgeous yellow brocade. 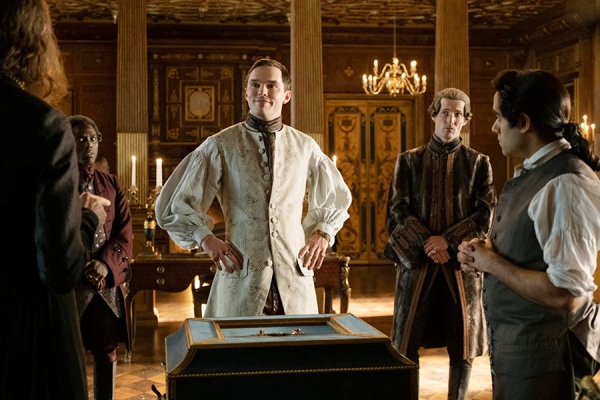 Peter has the rather hilarious idea of putting out a suggestion box for the court. 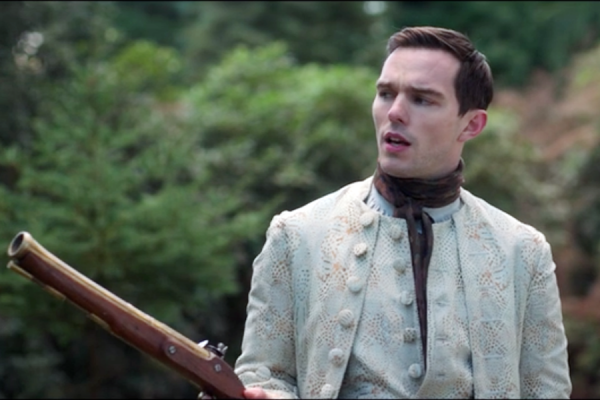 Here’s the coat that goes with Peter’s new waistcoat (also worn with brown leather pants). The fabric isn’t period, but with the brown cravat, it looks quite fetching on Nicholas Hoult.

The science fair thing the Peter set up isn’t quite as educational as Catherine had hoped. 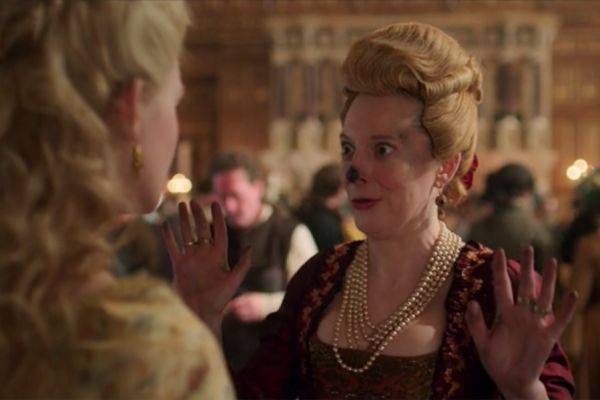 All these new happenings in the court aren’t making Georgina happy. She hasn’t been fucking Peter in weeks (though her own husband Grigor seems cool with that). 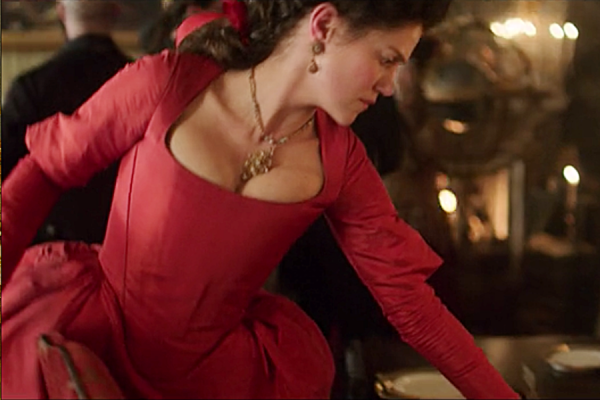 Georgina’s wearing the red dress sans big bow again. In the last podcast, we wondered about the sleeve shape, & it looks like they’re just a funky modern thing, a riff on leg-o-mutton shape. 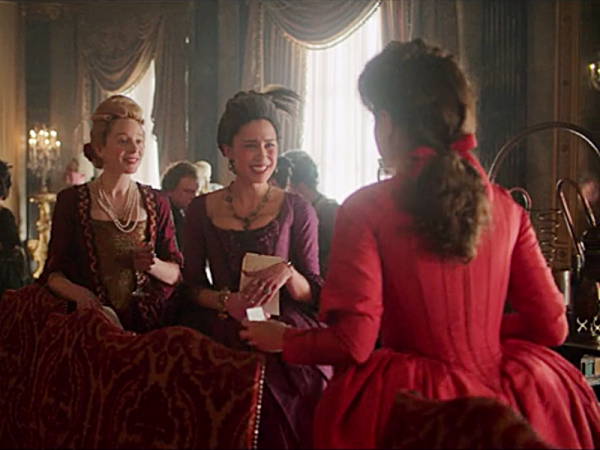 Lady Svenska, et. al., tease Georgina about her loss of status. We’re just looking at the sleeves & wondering if that bow pinned on or what.

Meanwhile, Mariel discovers that another servant, Vlad, has smallpox. Catherine wants to try to cure it, but Peter and the nobles want to burn all the servants. Leo’s not thrilled with what’s going down at court either, and he prints a bunch of pamphlets and cartoons satirizing the Peter and Catherine. Auntie is concerned at first. 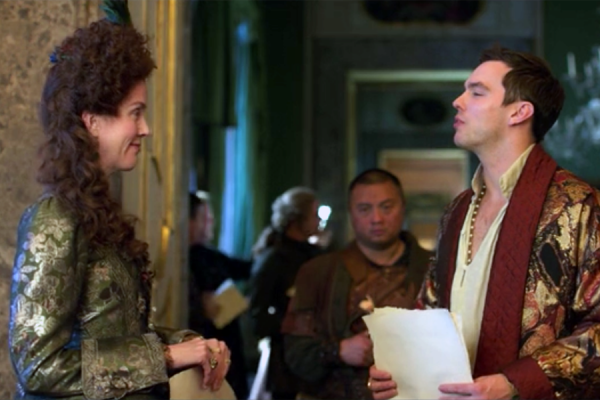 Just wanted to capture a pic of the lovely cuff on her gown. Sorry for making Peter look extra dorky.

Georgina convinces Peter to do away with Catherine’s improvements at court. Catherine goes out to find pox-ridden Vlad for a possible cure, too late, ‘natch. But she tries to convince everyone else about it. 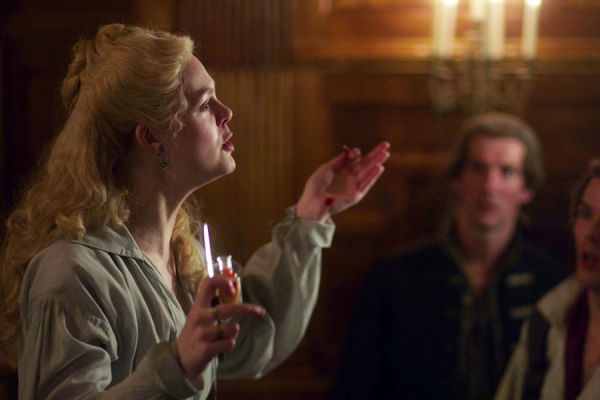 Episode 8 opens with Peter feeling a bit put out that his wife has not shown up for their new morning ritual: breakfast together. He’s had a surprise for her baked into a brioche roll: A bazillion karat rough diamond. This might be a reference to the historical Orlov Diamond, even though that was gifted to Catherine by her real-life lover Count Orlov. Either way, Catherine is very “meh” about it. 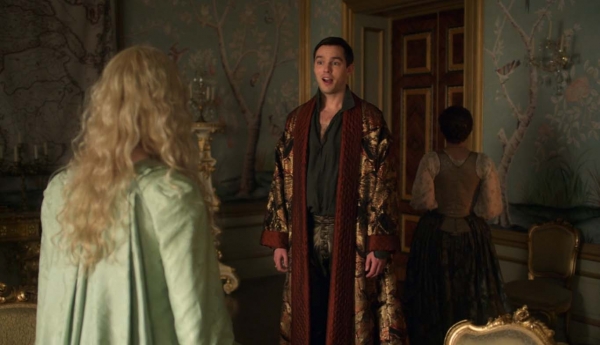 Apparently Catherine has survived the variolation pox cure without any ill effects whatsoever.

Next we see Leo, in yet another iteration of the jogging suit we saw in the previous episodes worn by Peter. It’s a weird mash-up of historical and modern references, but whatever. Leo is having a sad because Catherine is now busy trying to overthrow her husband and doesn’t have enough time to devote to him. 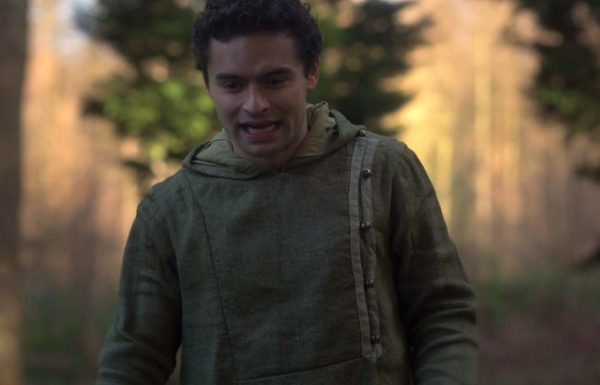 Meanwhile, Catherine stages another visit to Velementov to try to sort of ineptly seduce him into supporting her coup without actually having to sleep with him. It doesn’t go as she had planned. 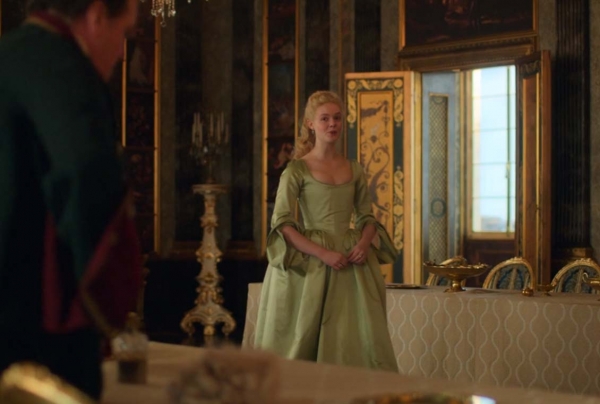 And she’s wearing that pale green dress with the unfortunate front boning again.

Next up, the Swedish ambassador has come to court to try to pave the way for a peace treaty with Russia. Peter thinks it will be HI-larious if they cut off his head and stuff it with meatballs before sending it back to the Swedish king. Orlov tries to talk him out of it and is brushed off, and the ambassador is none the wiser. 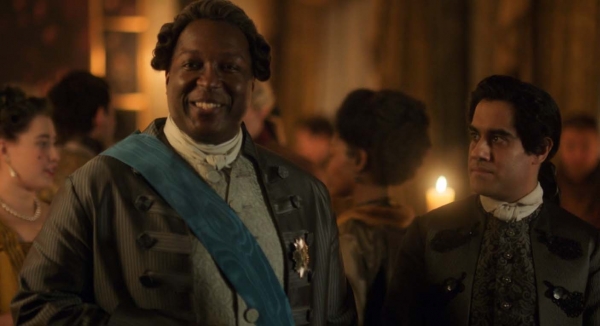 Catherine, however, is one step ahead and manages to convince Peter that maaaaybe brutally murdering the ambassador and sending his head back to Sweden filled with meatballs isn’t such a great idea. 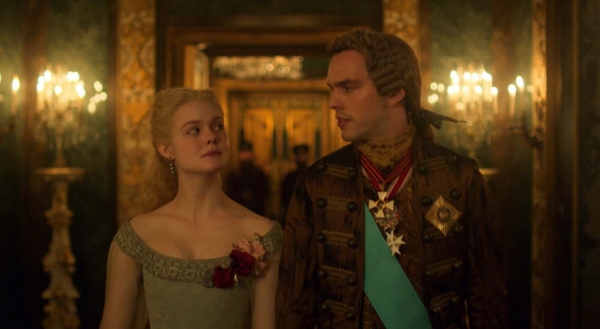 Catherine wears that “formal” dress first seen in episode three. We are underwhelmed.

Next up, Peter retires to the company of Arkady, Tatyana, Grigor, and Georgiana where everyone notices that Grigor is acting weird. Grigor presents Peter with the corpse of the bird he shot in the garden earlier that day and they’re all like, “Ohhh-kaaaaay….” 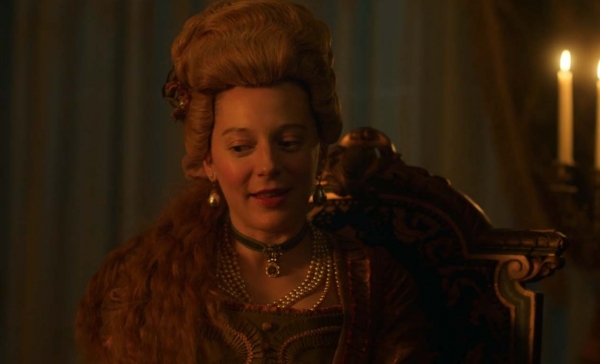 The scene moves next to Catherine and Orlov preparing to meet the Swedish King and Queen to discuss the peace treaty. 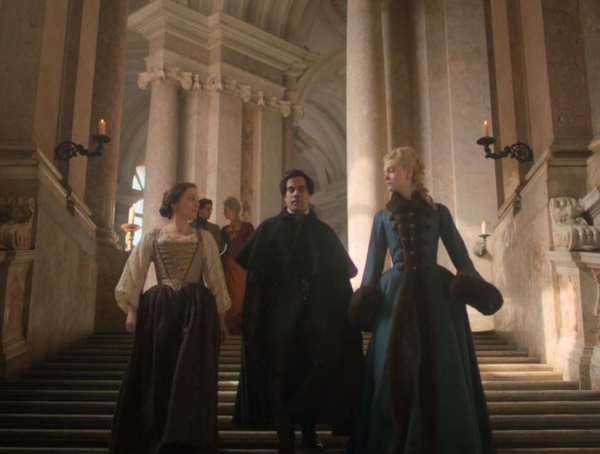 Their first glimpse of King Hugo and Queen Agnes is from their barge on the Dacha. 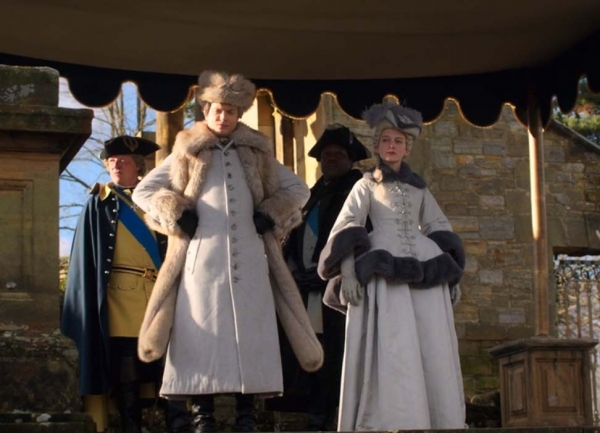 Sweden is a pale copy (get it?) of Russia.

Turns out the Swedish court is essentially a mirror image of the Russian court. Peter and Hugo hit it off immediately, while Catherine and Agnes quietly get shit done whilst their dingus husbands are off doing stupid shit with firearms. 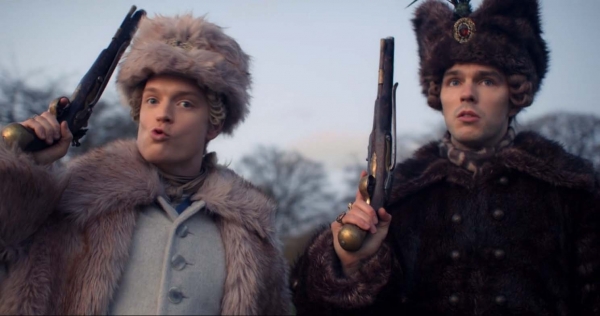 Later that evening, Catherine finds Velementov and approaches him again, this time playing it straight. She wants his support for the coup, but Velementov is ambiguous. He tells her that she’s committing treason and not to trust anybody, not even him. 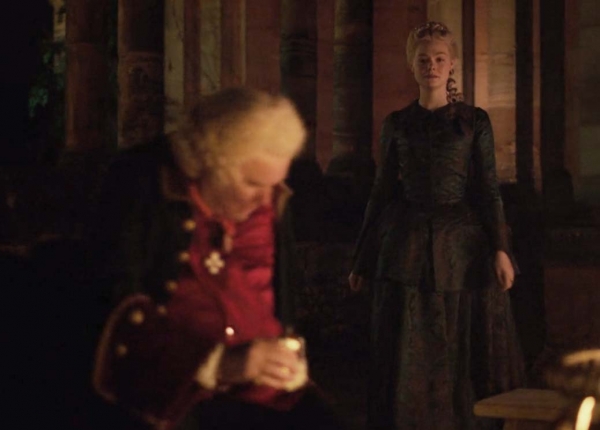 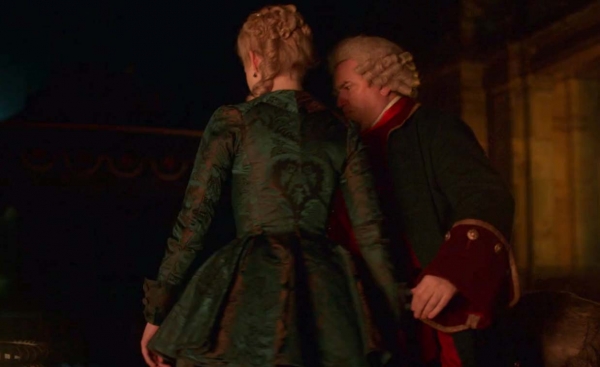 LOVE the green-black damask on Catherine, & we hope she wears it in the next couple eps when it’s not so dark.

The final few scenes wrap up with Hugo and Peter getting in a fight over how to end the war, and then Catherine saving the day by suggesting they each claim a victory of one of the two battlegrounds, with Russia retaining control of Saint Petersburg on the condition he lift the trade embargo on the Sweden. Everyone is satisfied and Catherine and Peter return home to great fanfare. 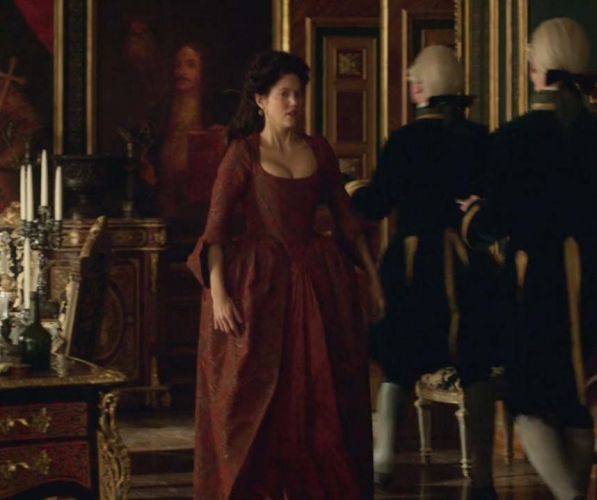 Georgie is not so thrilled, in her old red damask gown.

We’ll be back in two weeks with episodes nine & ten!