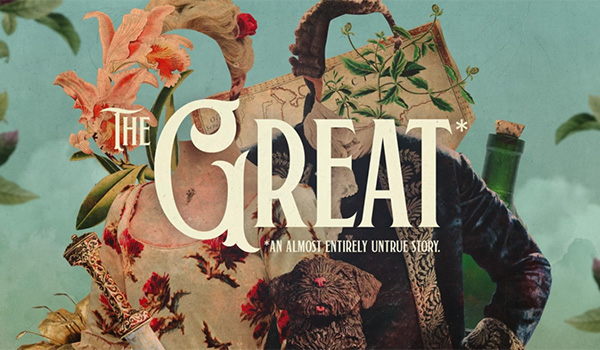 Frock Flicks note: We recapped and podcasted S1 of The Great, and when the second season dropped on Hulu, our friend Sabrina offered to write about it. This is the first in her series. Sabrina is a literature scholar and historical costuming enthusiast, and you can follow along with her costuming progress at MapleJade Creations.

The story of season two of The Great (2020-) picks up a few months after the end of season one. With a new costume designer on board — Sharon Long (who doesn’t seem to have other credits as costume designer for historical films, but is listed on IMDB as having worked on several well-known frock flicks like Finding Neverland and Elizabeth: The Golden Age) replaced Emma Fryer — and a number of plot developments, we see some changes in how the characters are dressed. In Part 1 of this two-part series on season two, for absolutely no real reason other than having some sort of criteria for splitting up what would otherwise be a gigantic post, I’ll be focusing on the blonde characters.

Gone are the skirt and loose blouse ensembles that featured so prominently in season one, but there is a similar use of colour palette that I think serves the storytelling well. In an interview with Bustle, Fryer said that she used “soft, romantic, whimsical colors” for Catherine early in season one to set up a contrast with “the color of Peter’s court,” which “was made up of rich jewel tones.” Long says, in an interview with Cosmopolitan: “It seemed appropriate to keep her in the same colorways.” This colour story isn’t limited to Catherine; each character has their own particular palette, and it says something about who they are and where their allegiances lie (an important plot point with all the political machinations going on at court).

We see Catherine (Elle Fanning) in a lot of her signature pastel colours, especially in aqua shades, which signal that Catherine is still, in her optimism and idealism, in opposition to the Russian court at large and the faction that supports Peter (Nicholas Hoult) in particular. But Catherine is now visibly pregnant (and continues to be so for much of the season), which has a big impact on how she’s dressed. Eighteenth-century fashions, with their inherent adjustability, could be worn through much of a person’s pregnancy without requiring significant alterations, like this maternity outfit in the Colonial Williamsburg collections. And Catherine does wear a few outfits that look like 18th-century ways of accommodating an expanding belly: jackets laced over stomachers. 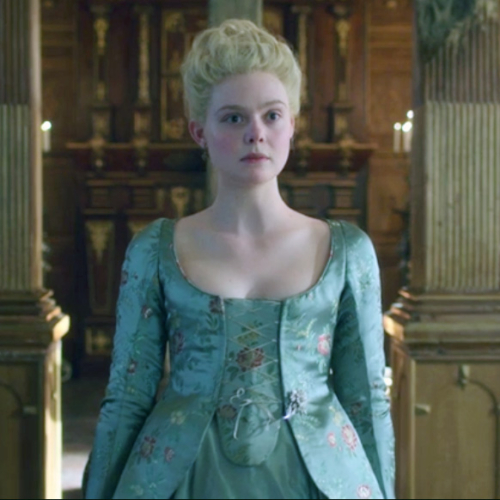 Jacket ensemble, laced loosely at the bottom to allow for the pregnant belly.

A Fashionista article states that, instead of sticking to strict historical accuracy, Long was inspired by “contemporary designers known for volume and exuberantly edgier takes on vintage silhouettes, like Simone Rocha and Cecilie Bahnsen, plus ‘50s-era Pierre Balmain.” As a result, we get a lot of these high-waisted gowns, which are not period at all, though there does seem to be a good deal of variety in style. 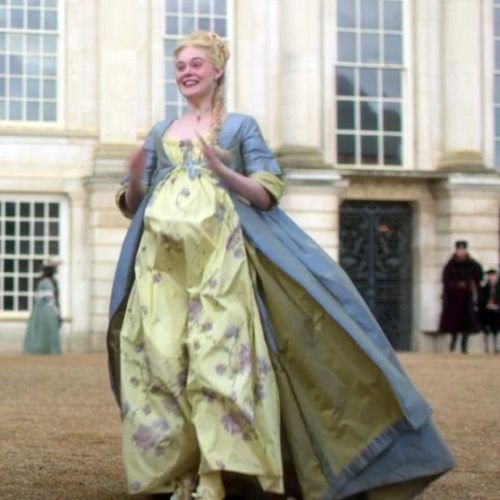 Reminds me of nightwear like this from the ‘50s and ‘60s. 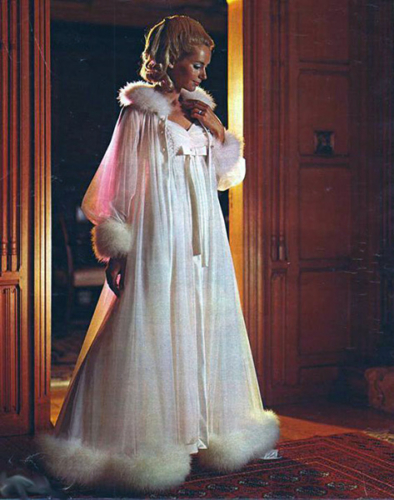 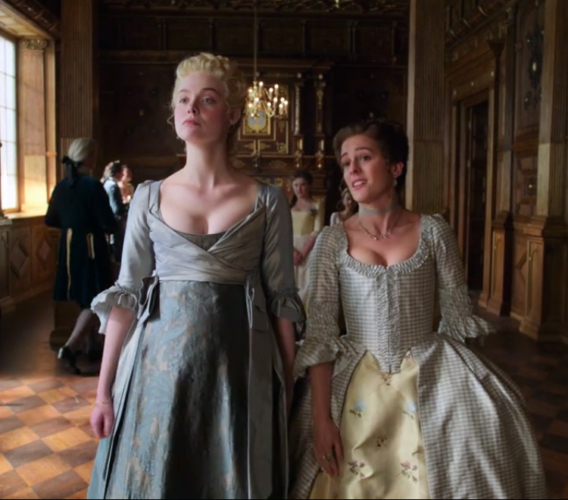 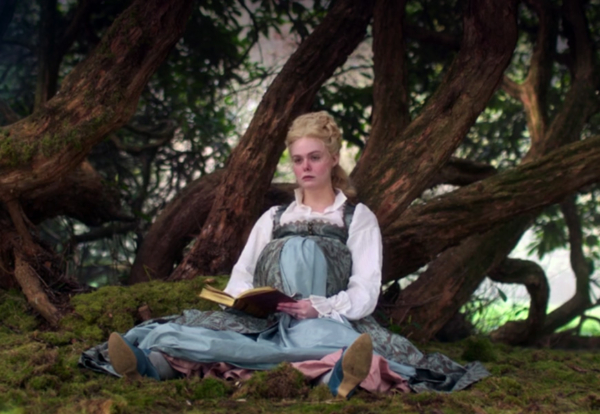 Another maternity gown. This one looks like it’s inspired by the Russian sarafan.

Some of my favourite outfits from season one were the riding habit ensembles and the coats, so it was nice to see more of these this season. 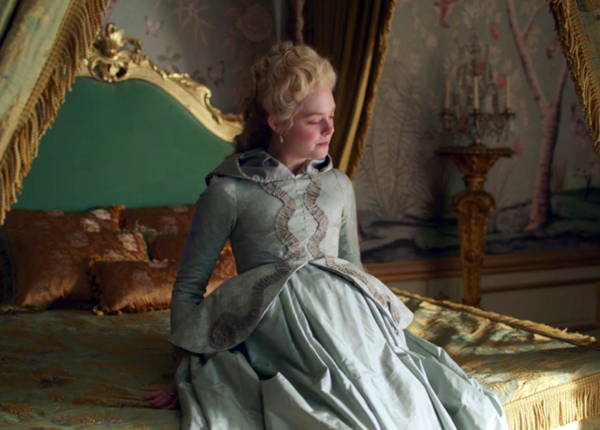 This one has a hood! 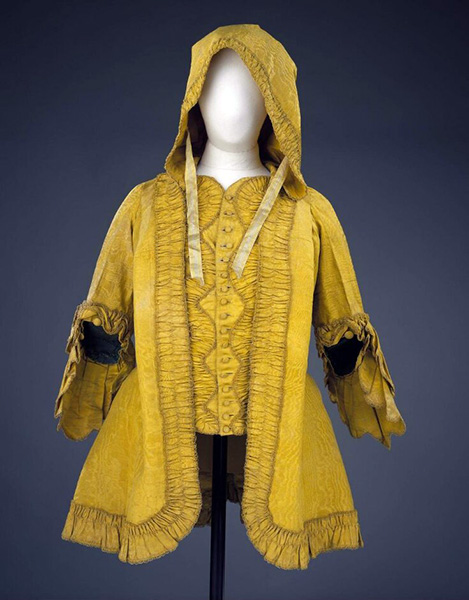 Hoods are historically accurate! Brunswick at the V&A T.331-1985 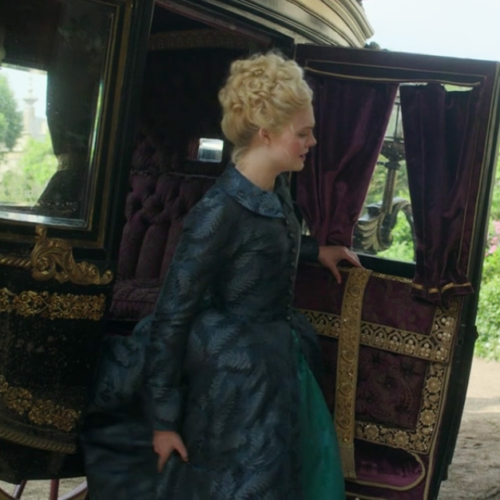 As the season goes on, Catherine’s clothes get darker, showing her maturation, but are still mostly in the blue family. It’s sort of a callback to season one where she wears darker blue as she’s becoming more assertive of her place in Russia. This gown, with its fitted back and closed front, is more of an 1770s-80s style than 1760s, when sacque gowns (AKA robes a la Française) were still popular. 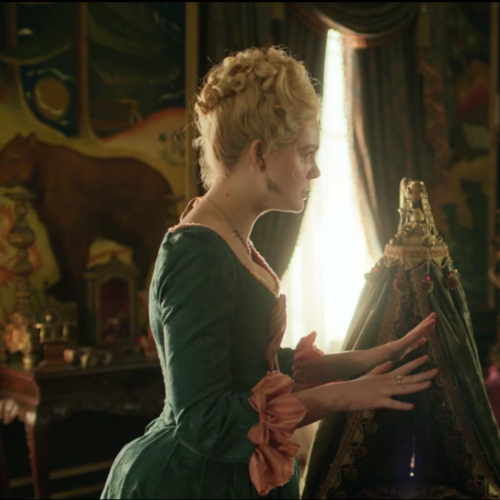 Two notable colour deviations for Catherine that take place during important plot events are when she wears gold or red. Her coronation outfit, referencing traditional Russian sarafan, is suitably glitzy for a coronation. The gold speaks to her new status as empress. Of course, it doesn’t even remotely resemble the real Catherine’s coronation gown, which is still around in the Moscow Kremlin Museums. The real gown follows the standard for court dresses throughout much of Europe in the 18th century with a boned bodice, wide skirt, and train. 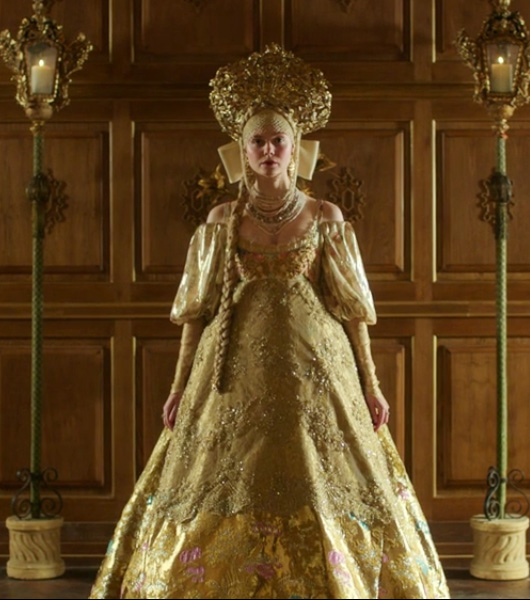 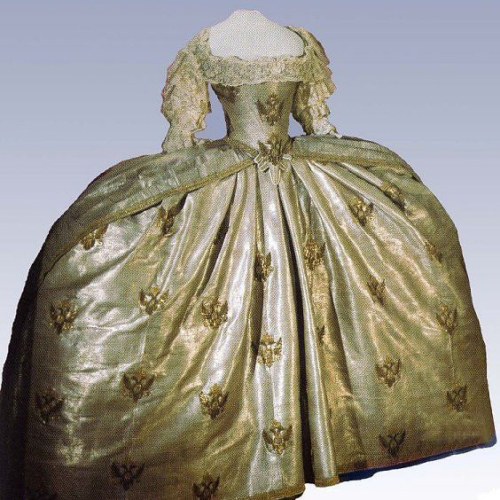 During the drama-filled finale, Catherine wears two outfits of ivory accented with a coral red, the bright colour hinting the intense emotional turmoil that Catherine is experiencing. 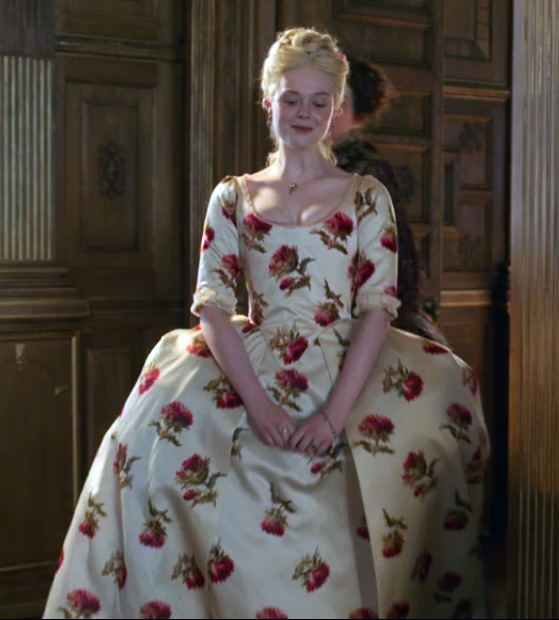 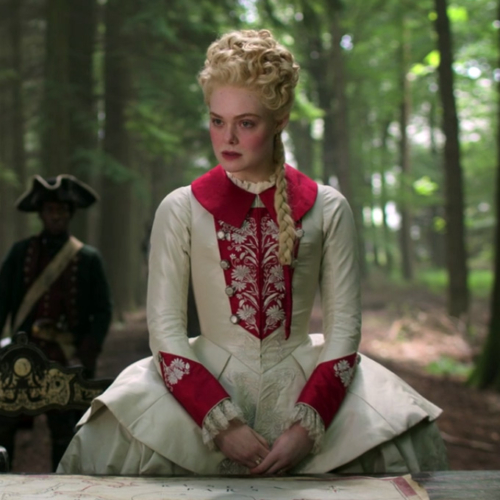 Great silver embroidery on this one.

Catherine’s mother, Joanna (Gillian Anderson!), gets a very bold and saturated colour palette that is unique to her. This emphasizes her forceful personality at the same time that it allows her to stand out from the rest of the Russian court. After all, she’s German and on a visit, not part of the court at all. She also gets a fabulous hat that is as assertive as the woman wearing it. It’s notable that Joanna wears the widest panniers (the skirt supports) of anyone in the series. Not only does it mark her out as the most fashionable person in the show, but it also allows her to take up the most physical space and reinforces her strong character. 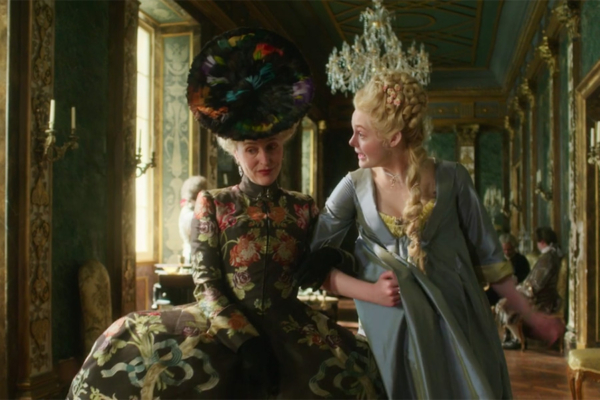 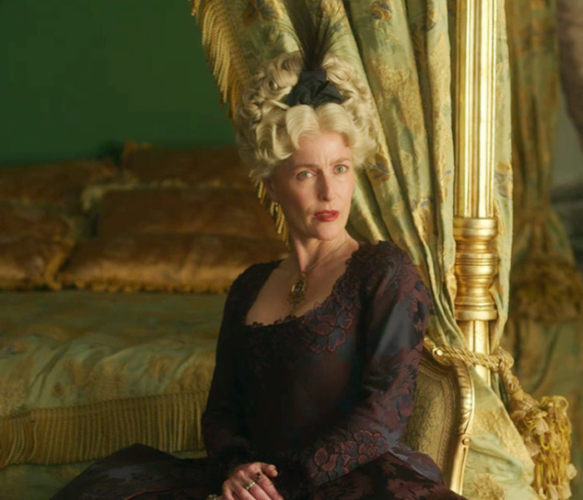 Are these fabrics period correct? No. Are they totally gorgeous regardless? Absolutely! 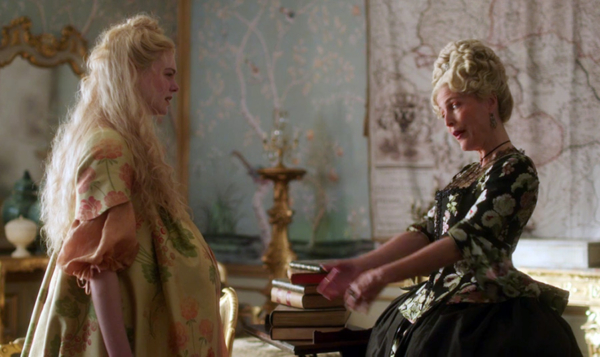 Joanna’s also the only character to really wear black. Is this a foreshadowing of the story?

Tatyana (Florence Keith-Roach) is a member of the Russian court and has never been a fan of Catherine. Her colours, usually shades of gold, tie in with the rich, autumnal shades of the rest of the court. I think the slight off-ness of the colour also reflects Tatyana’s character, who is always trying — but not succeeding — to get closer to Peter. Tatyana and her husband Arkady (Bayo Gbadamosi) are always a bit on the outside of the inner circle of Peter, Grigor, and Georgina. Although the rather eye-straining colours she wears might also be a symptom of her somewhat grating (but hilariously so!) personality. 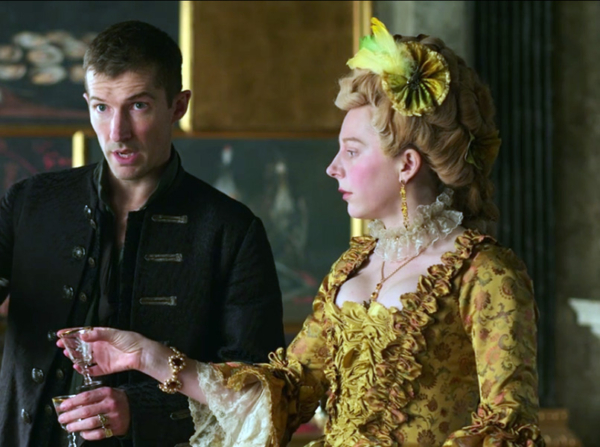 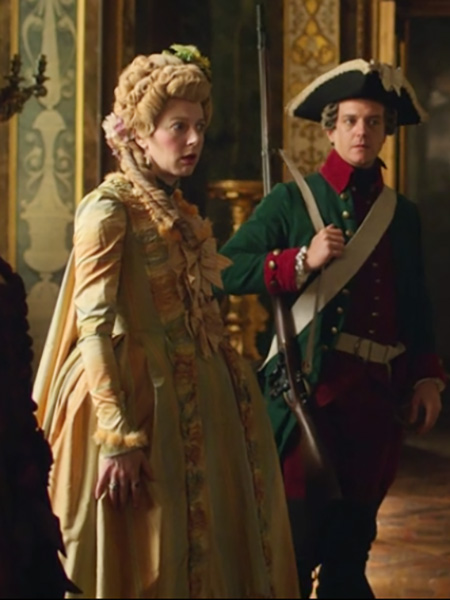 Tatyana wears a lot of sacques, which is what you’d expect to see in this historical context. You can see the back pleats on this gown. 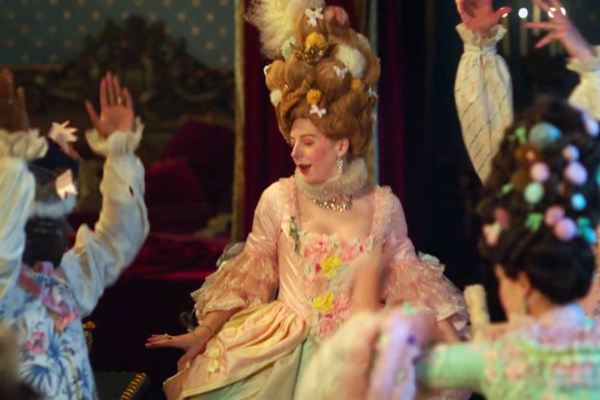 Tatyana breaks out of her standard color palette for a special occasion: the baby shower! 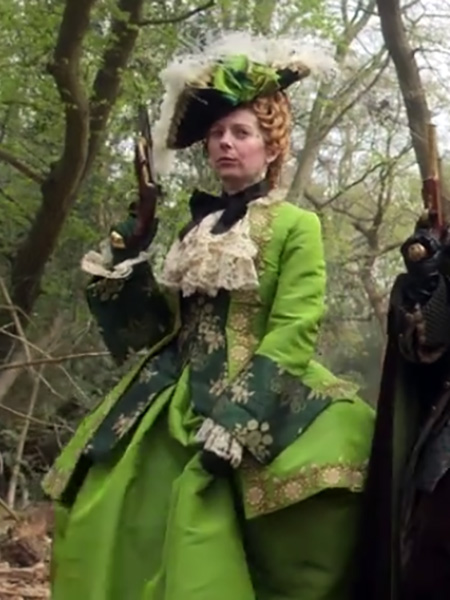 And she has this incredibly bright riding habit outfit. It’s green, but with a yellow undertone.

I was very excited to see the Swedish royal couple return. Hugo (Freddie Fox) and Agnes (Grace Molony) crack me up. They’re still wearing the pale shades we saw in season one. This sets them apart from everyone else at court because nobody else wears this colour (except Catherine very briefly early in episode one). They obviously don’t belong; they’re not Russian; they’re Swedish. The silvery colour also shows that their allegiance is to themselves. They’re not aligned with any of the other court factions because they’re too focused on their own agenda. 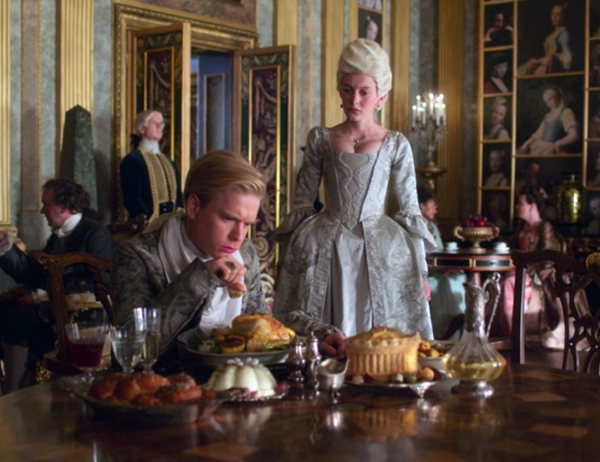 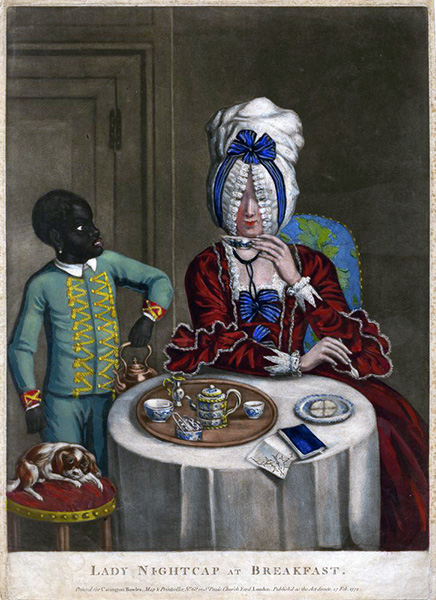 Agnes has some long sleeves under the sleeve ruffles, something that does appear in period, especially on Brunswicks and Jesuits. 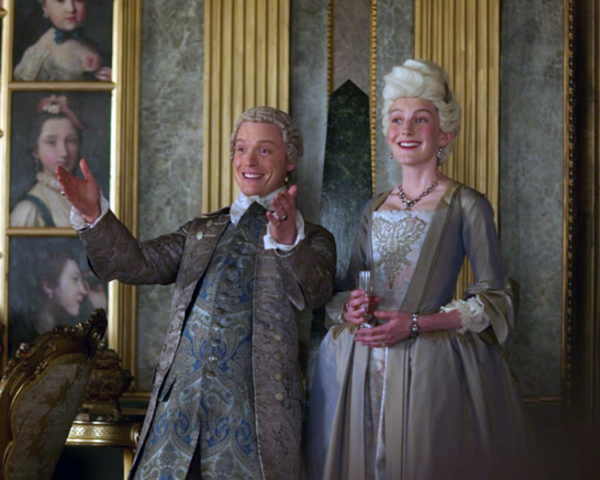 How can you not be happy to see this pair again?!

That covers all the main blonde characters. Stay tuned for Part 2, where I delve into what the brunettes are wearing.

Are you watching season 2 of The Great?