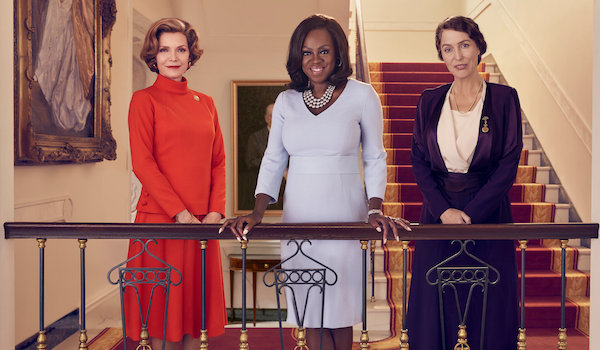 I was surprised to enjoy The First Lady — Showtime’s 2022 miniseries about the lives of former First Ladies Eleanor Roosevelt, Betty Ford, and Michelle Obama — as much as I did. Part of that comes from the strong performances by leads Gillian Anderson as Roosevelt, Michelle Pfeiffer as Ford, and Viola Davis as Obama. Another part comes from the way the stories were told, with flashbacks and pivotal moments from all three lives interwoven together. Part comes from the fact that I actually knew very little about Betty Ford, whose term in office ended when I was about 2-3, and who had a fascinating life! And part comes from quality costumes.

I’m going to focus in this review on Eleanor Roosevelt and the younger Betty Ford, as these costumes fit most within our time frame here at Frock Flicks … although I do want to say I enjoyed the Michelle Obama scenes just as much, because you got to see a lot of her background and her personal take on events.

Although the series begins with the three ladies mid-way through their terms, there’s lots of flashbacks; given Roosevelt’s age, that means we go as far back as the Edwardian era: 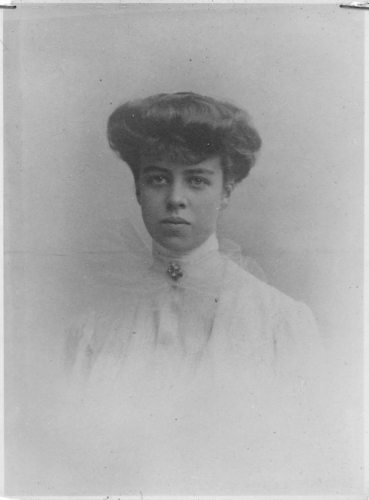 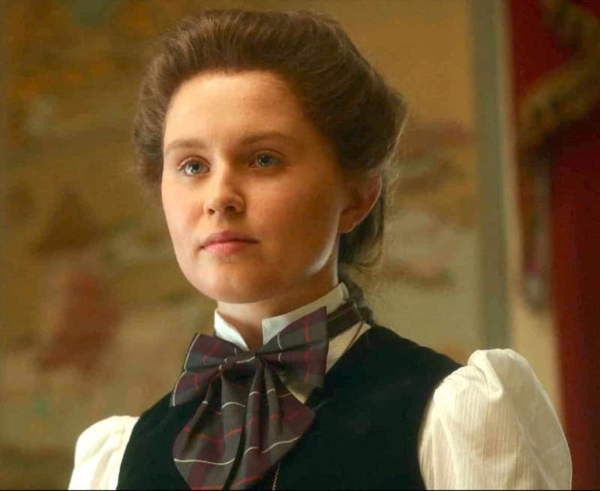 The film’s Eleanor in her school days. 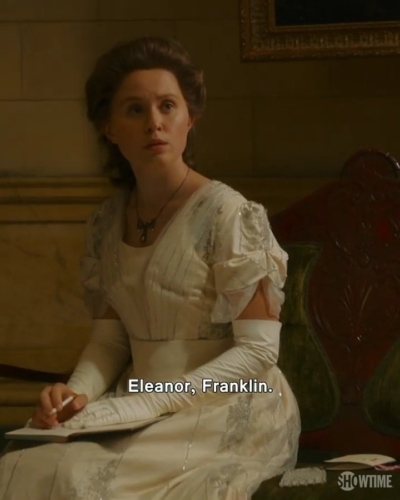 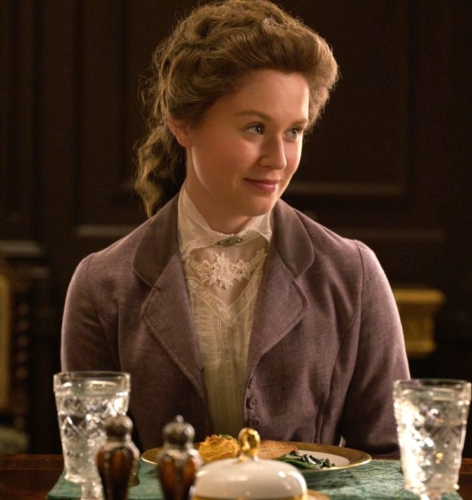 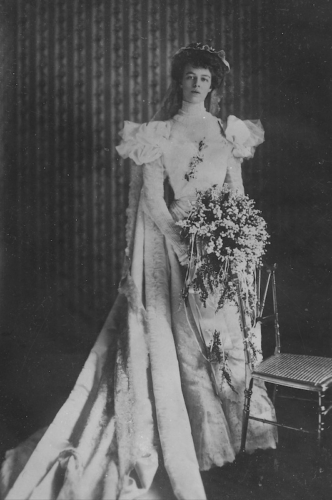 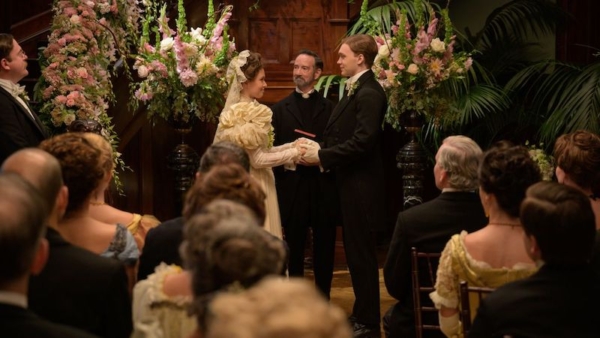 Sadly the only image I can find of the wedding dress on screen.

According to the New York Times,

“[Executive producer/showrunner Cathy] Schulman and Signe Sejlund, the costume designer for the series, were focused on getting the clothes as accurate as possible. It was, Ms. Schulman said, ‘crucial.’ Starting in late 2020, teams of researchers began collecting historical documentation and images from the periods represented, many of which had been preserved for posterity, the better to build wardrobes that could consist of about 75 changes for each woman. These included such major public sartorial statements as their wedding dresses, inauguration outfits and the gowns they wore for their official White House portraits” (Fashioning ‘The First Lady’).

Probably my favorite looks were from Roosevelt’s pre-White House years, if only because I love 1910s fashions so much: 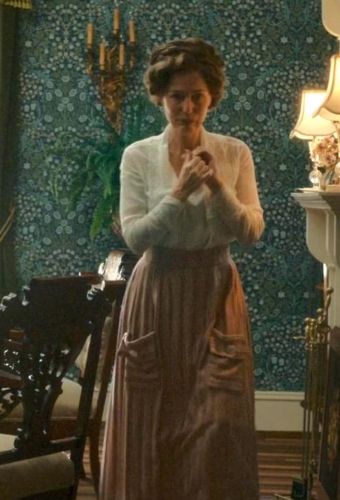 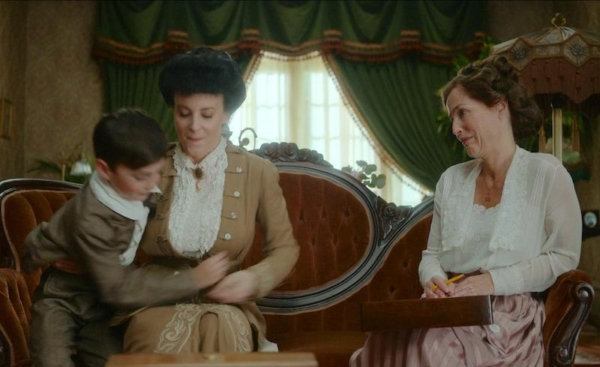 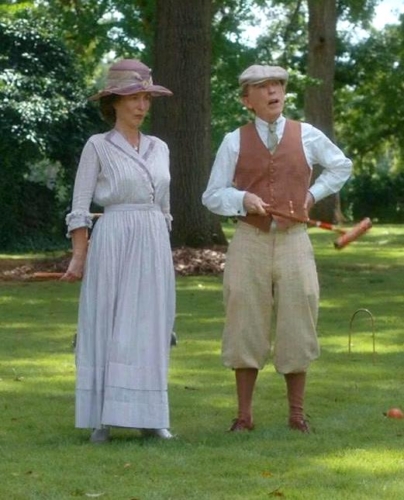 This was my favorite! 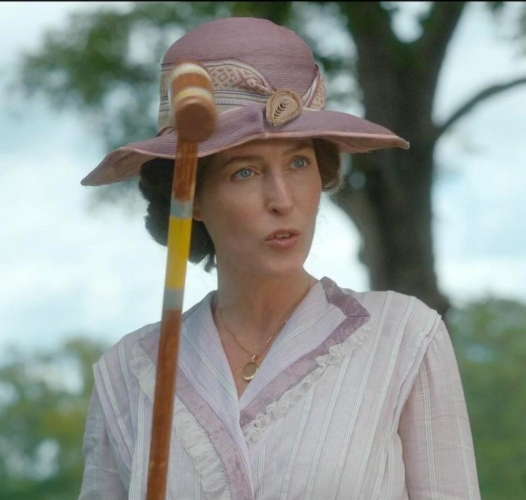 Lovely use of color, and that hat! 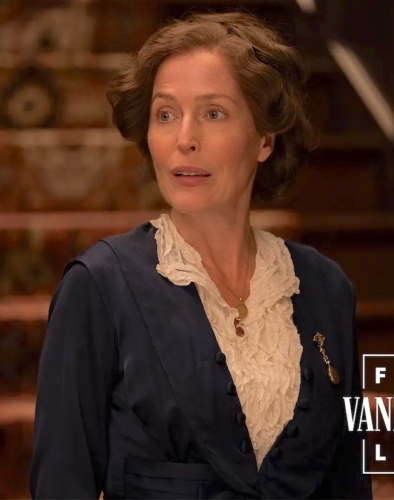 They didn’t always stick to literal recreations, for example. Eleanor Roosevelt wore a huge floral necklace to her husband’s first inauguration, which designer Sejlund told the New York Times “looked almost ridiculous when you see it with a modern eye” (Fashioning ‘The First Lady’). And the production did drop that element: 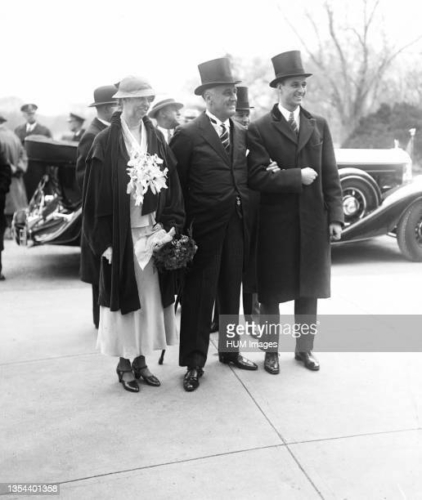 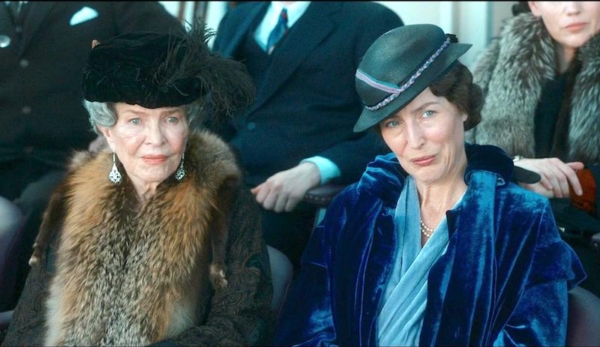 With her overbearing mother-in-law (played by Ellen Burstyn) and sans necklace.

Older Eleanor looks very much right out of 1930s and 1940s photographs. According to Sejlund,

“There are so many images of all these ladies, so we had to do replicas of some of their most iconic wardrobe items which was really interesting and fun to do, because we have actresses playing them that don’t have the same shape body or height but still, you have to make it feel like the first lady they are portraying” (Costume designer Signe Sejlund on capturing the glamour of US First Lady fashion). 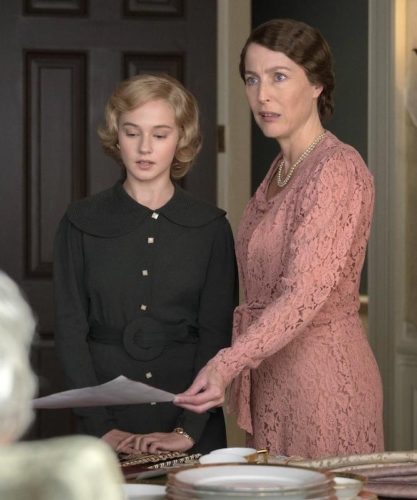 In that pink lace you see SO often in vintage dresses, with her daughter. 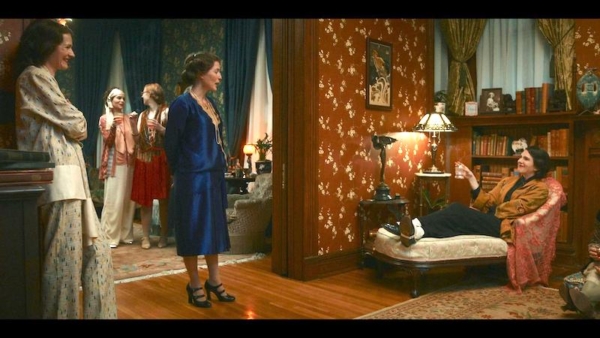 At a bohemian party. Note women in PANTS! 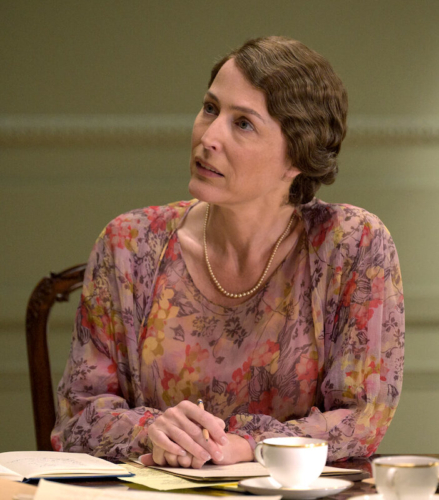 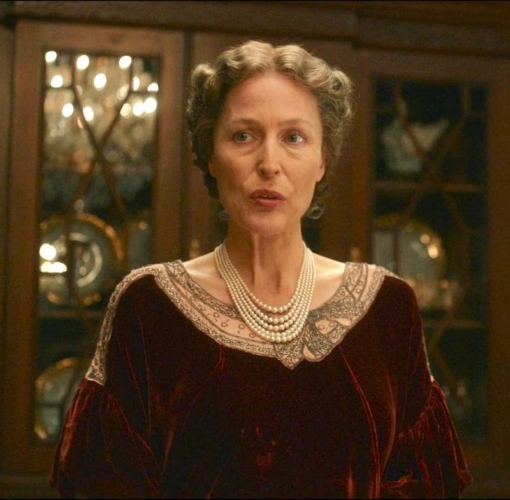 Velvet for a fancy dinner. They did a good job aging Anderson as Roosevelt.

However, as Jezebel rightly pointed out, the MOUTHS WERE VERY DISTRACTING. According to makeup designer Carol Rasheed,

“[The women] all had personals [personal makeup artists], so I really did not spend a lot of time in the older years. Again, I looked at the younger person. And really, it was just a matter of making sure that the brows were kind of correct, making sure that the eye color was correct. And with the younger Eleanor Roosevelt, we did have to have a mold of her mouth made to make sure that we had teeth to give the overbite that Eleanor had. That was the only thing that I can think of that we really had to try and get that correct” (How Viola Davis Transformed Into Michelle Obama in ‘The First Lady’). 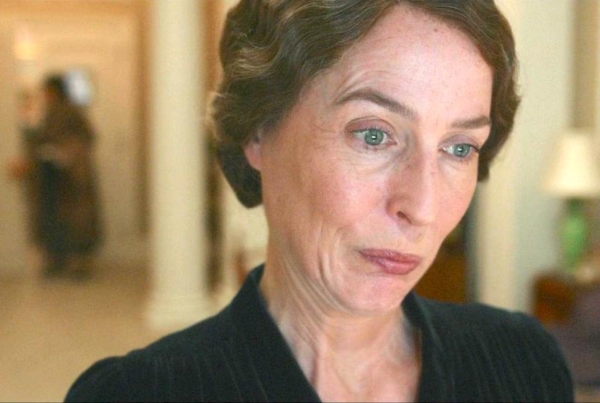 I’m not saying Roosevelt didn’t have an overbite, but did she do THIS with her chin??

ALL of Betty Ford’s life was fascinating to me, as all I knew was “alcoholic/Betty Ford Center.” She started out as a modern dancer, studying with Martha Graham: 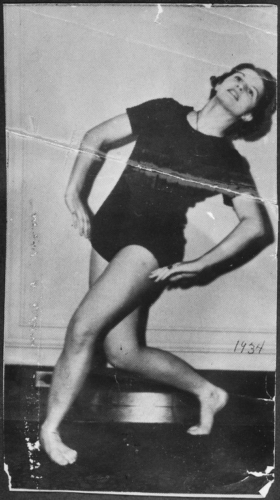 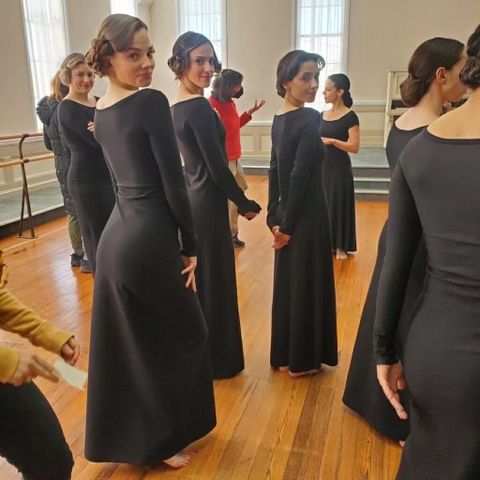 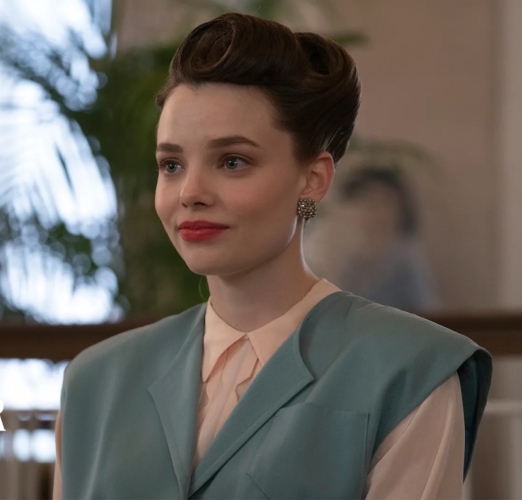 Working in a department store. 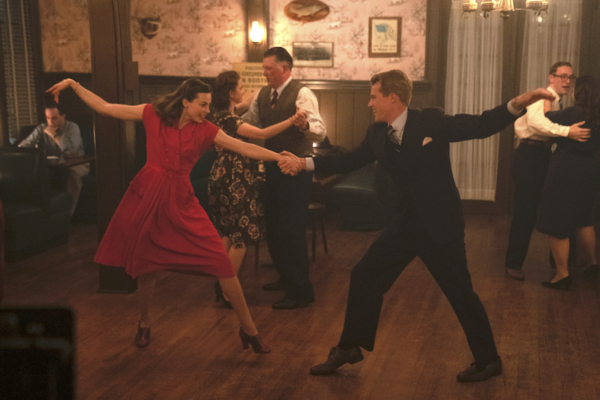 Again they recreated Betty’s wedding outfit — it was her second wedding, so no white dress: 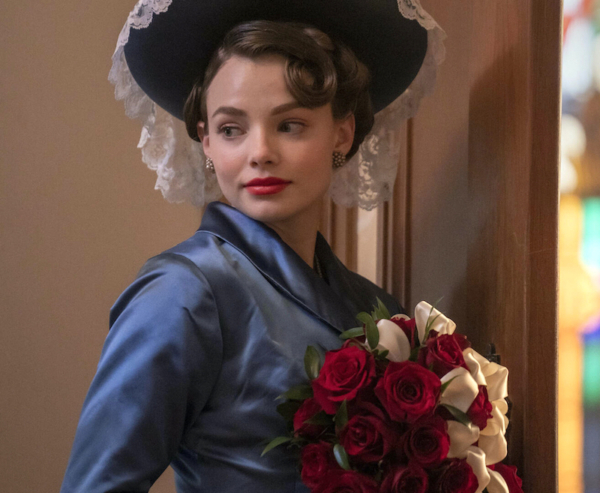 I actually feel like this is better quality satin than the original, but maybe that’s just the photo quality?

For older Betty, they went big 1970s bouffant hair and lots of color: 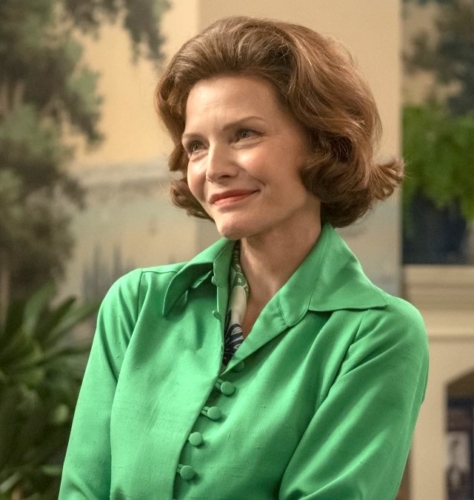 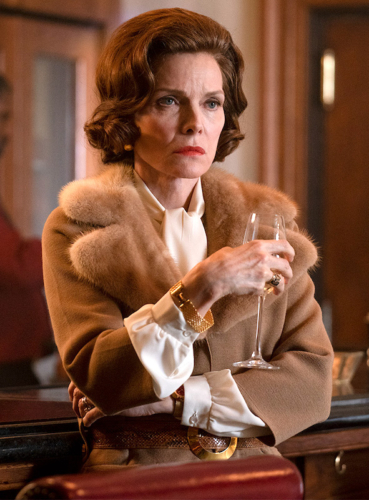 And they recreated iconic looks, like this one in which she poses on top of a White House dining table: 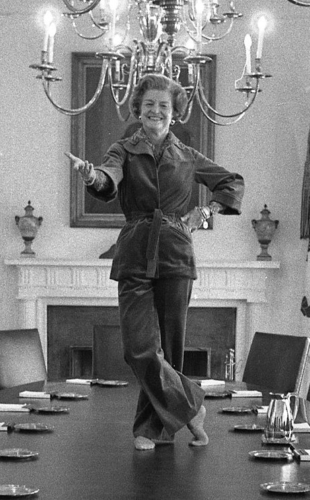 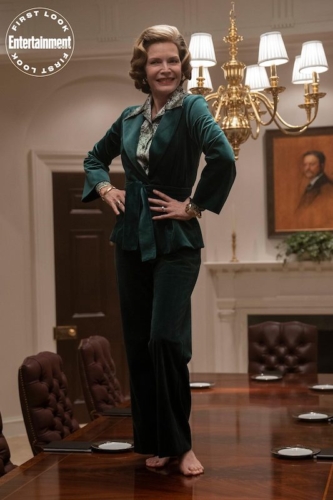 “We wanted to make sure the eye colors were the same for each First Lady’s, from their young years to when they’re adults. That’s the sort of nuance you look at when you’re doing someone’s likeness, especially if you are doing someone so high-profile, like the First Lady. As the Makeup Department Head, that’s the association I had for all three blocks, but really, mostly for Eleanor and the Betty Ford block — minimalist makeup that was consistent across the years of their lives” (The First Lady‘s Makeup Department Head Carol Rasheed on Creating Looks for Several Historical Figures).

So, if you haven’t checked out The First Lady, I strongly suggest you do! I think you’ll like it.

Have you seen The First Lady? How well do you think they captured these iconic women’s looks?