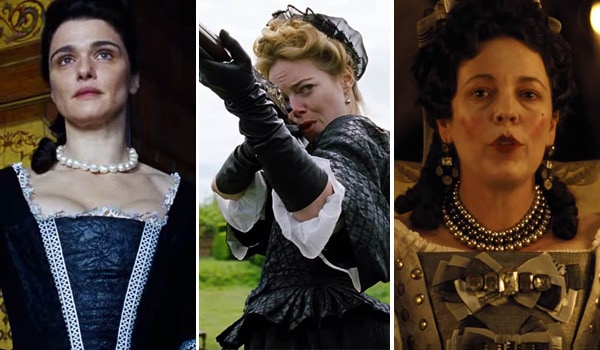 As we mentioned in our podcast about The Favourite (2018), costume designer Sandy Powell has done a ton of press about this film, so here are some of the details we referred to…

“We sort of talked about the film being monochromatic or a reduced color palette. The scenes within the court are monochromatic. The staff, the footmen are in shades of gray. The kitchen staff, as a bit of a contrast, are all in indigo denim. Made from old jeans from trouser shops in Slough.”

“In keeping with the theme of the court, the cut of all the clothes is historically accurate. The actual shape, the silhouette and the way they’re made is all historically accurate. It’s just been treated differently. The textiles aren’t particularly historic. There was a lot of unconventional fabrics and everything is laser cut. All the black trim and geometric print was laser cut. I used fake leather that I found in Shepherd’s Bush Market.” 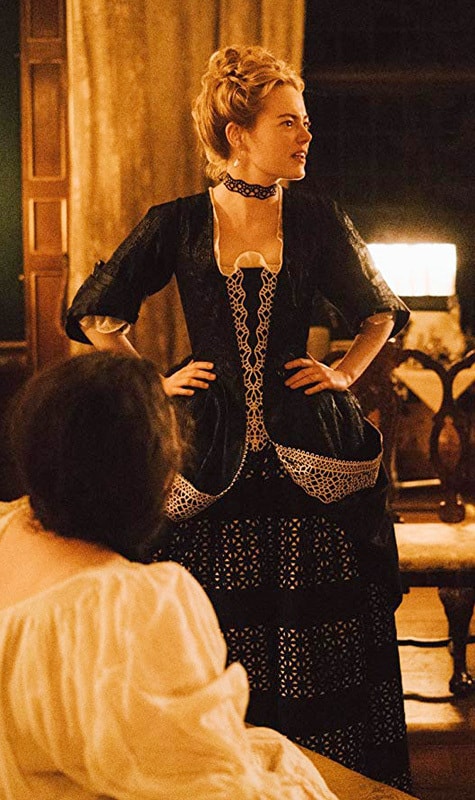 “Because it was just black and white and there wasn’t a lot of decoration, I wanted there to be textures of fabric. A lot of those fabrics African fabrics that are stamped. There are these amazing fabrics from Nigeria that they have in Brixton Market. I bought tons of those fabrics.” 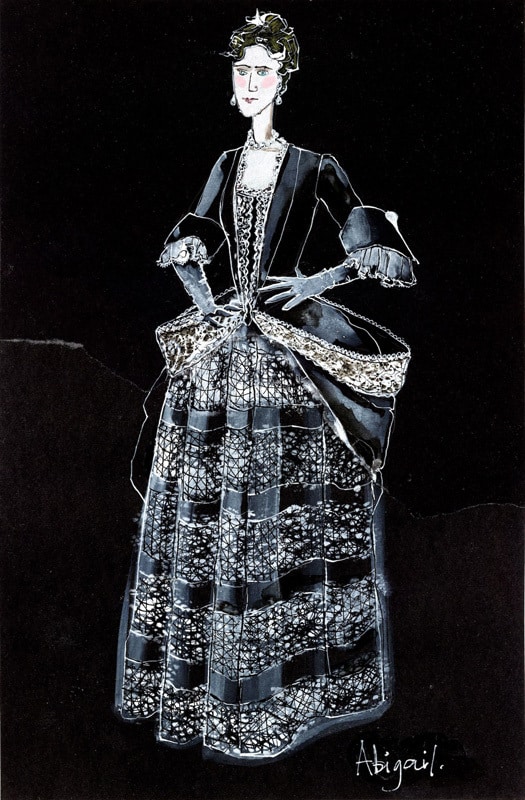 “I love thinking what’s the cheapest fabric I can buy and make it look like. If I didn’t have fantastic cutters and stitchers who make it look good.I had really good people working for me. 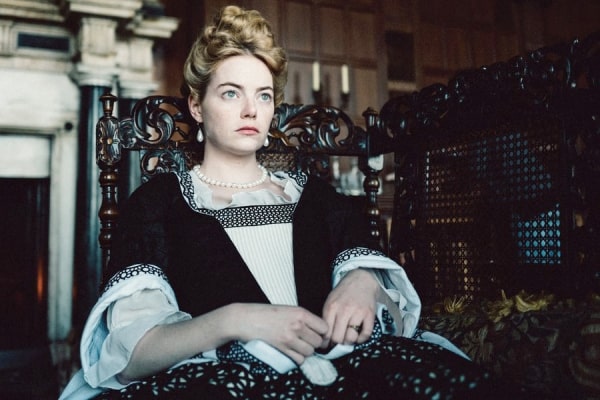 “The women’s costumes are a very good mix-and-match capsule wardrobe. It looks like they have lots of changes, but the dresses are made up of components. There’s the triangular bit at the front that clips on and so I’d switch those out. It’s a bit like having two jackets, two blouses, two skirts and seeing how many combinations you can get out of that.”

On Abigail (Emma Stone) — “I wanted to give her that vulgarity of the nouveau riche, and her dresses get a little bolder and showier. There’s more pattern involved and there are black-and-white stripes,” she says. “I wanted her to stand out from everybody else as trying too hard.” 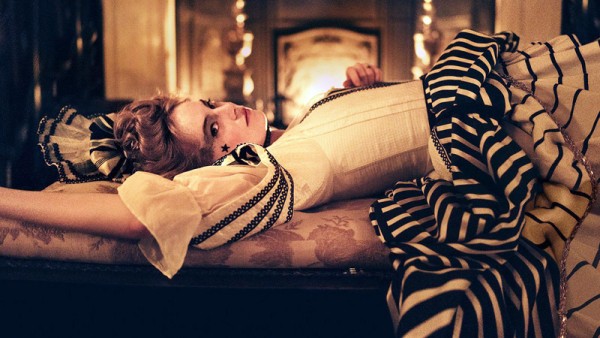 On the queen’s court robes — “I looked at images and real things like it, and normally [this type of garment] would be solid gold, embroidered, and bejeweled, so I thought what else can I do just to give it an air of royalty? Ermine is associated with royalty, it’s usually just used as a decoration in small amounts, so I decided to just cover her in it. Because in the rest of the film I have her in a nightgown, not bothering to get dressed every day.” 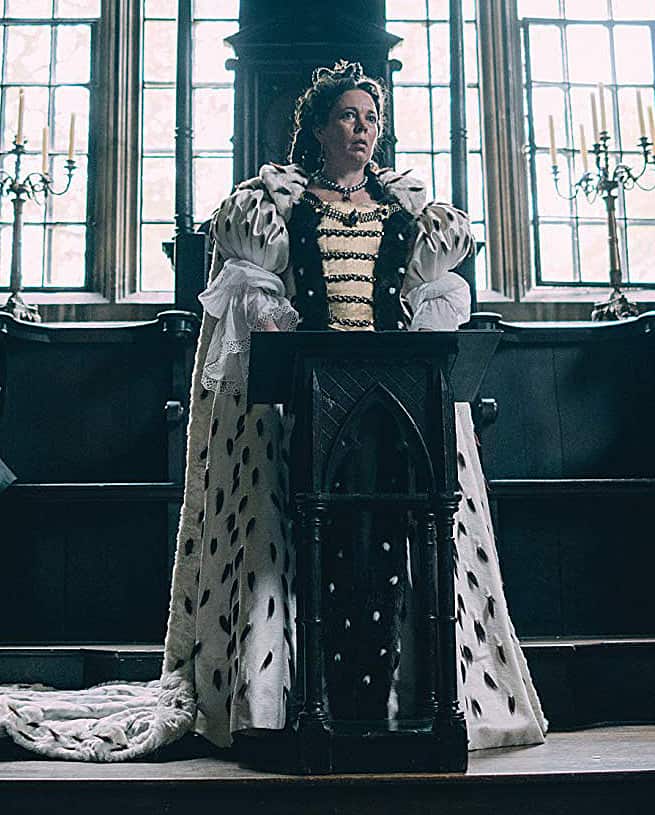 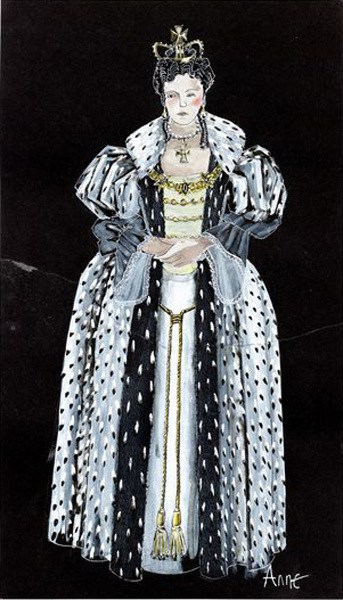 On materials — “I sent my buyers out to thrift stores to buy up anything in denim, so we had hundreds of pairs of distressed jeans, so I got all the shades of indigo and blue. They were all made for the kitchen staff: all the women’s corsets and bodices were made of denim, and the men’s britches and jackets were made from old cut-up jeans.” 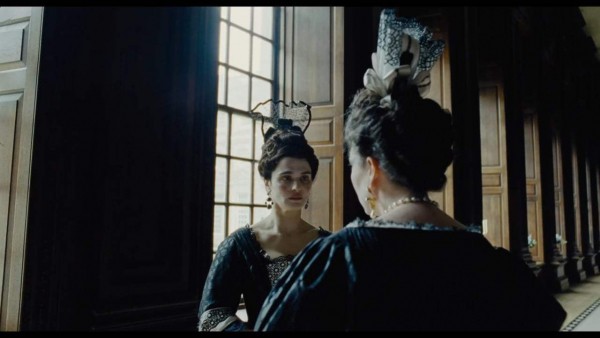 “I used fabrics that were black-on-black or white-on-white so a lot of the fabrics on the dresses have texture. That’s not particularly accurate for the period. I also didn’t use any lace at all, I just used some laser-cut vinyl as trim that I found ready-made, which is very contemporary way of treating fabric. Obviously, laser-cut fabric isn’t a strange fabric, but it’s strange to use it in this context for an early-18th-century period film.” 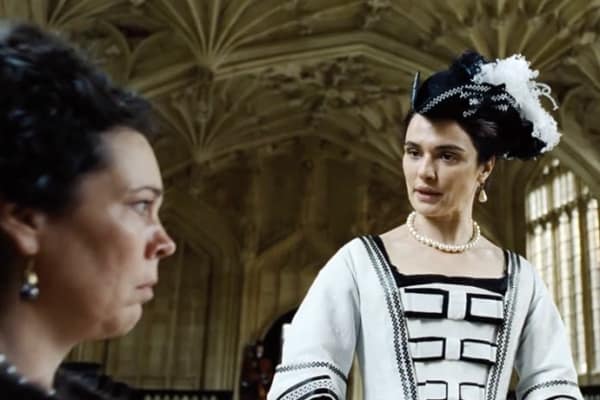 “They would’ve had more embellishment, embroidery, and bejeweling, and fine, sumptuous fabrics like silks with colors, and I decided to pare all that down to basic, affordable fabrics to concentrate on silhouettes and shapes and restricting the color palette.” 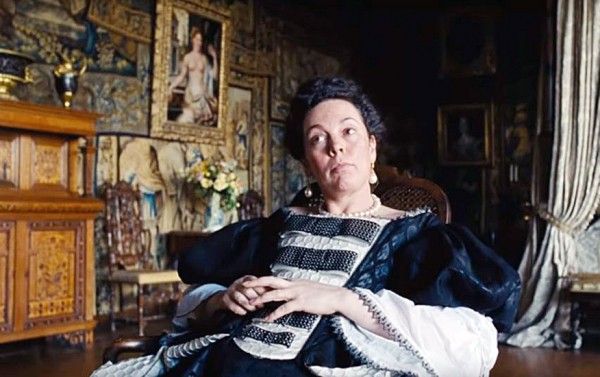 “I think it helped because it didn’t distract. If it was all gilded to the nines, glittery, sparkly, and brilliant like the stuff we’re used to seeing in other [period] films, that would’ve taken away from the contemporary, modern approach Yorgos had. The dialogue is very contemporary, and the themes are very contemporary, and if we’d dressed it up as too period, it would have been a distraction. I didn’t want any of that to get in the way, I wanted to be able to pare down what we see to the people, the intrigue, the plotting, and the politics.” 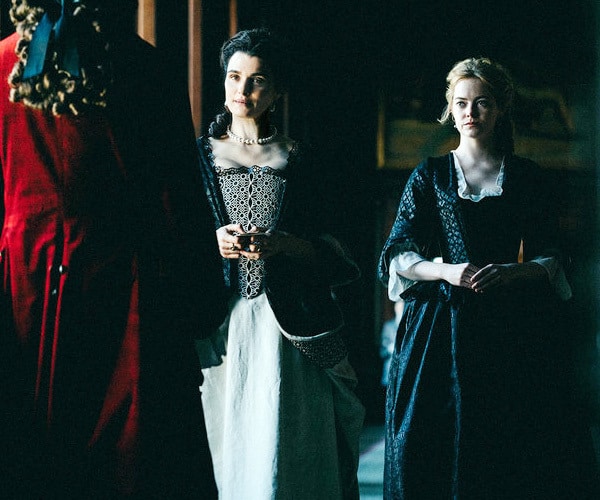 On the riding outfit for Lady Sarah (Rachel Weisz) — “It’s a masculine [outfit]. What Rachel wears is traditionally male attire with britches and a waistcoat; it’s a cravat with a high neck. There’s a costume similar to that in Orlando and there’s a section in Orlando which is monochrome black-and-white, and it’s the same period that we’re doing in this. I didn’t think about it at the time, it was just subliminal. I do think there is a similarity between the two films because Orlando was the last unconventional period film I’d done, so there is a similarity. I think that was the last time I had the same amount of fun doing something like this!” 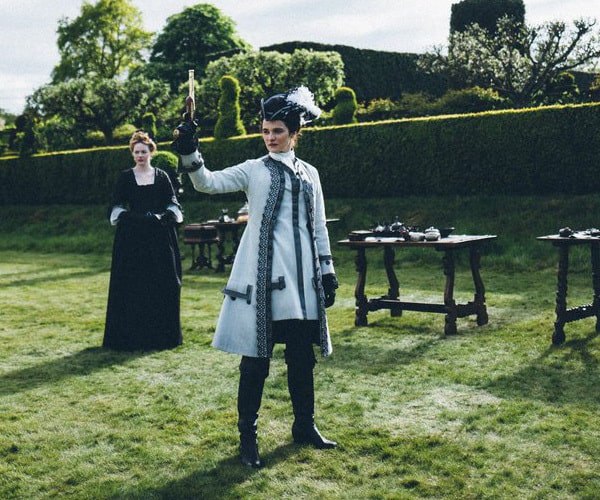 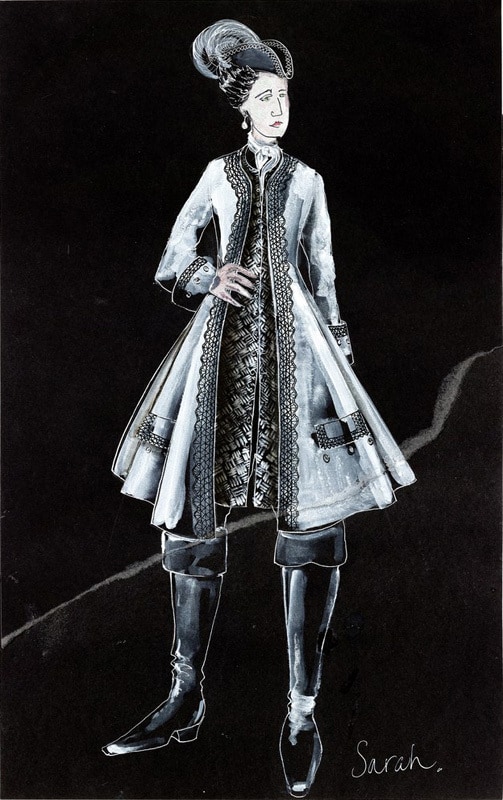 On corsetry — “The most important thing is getting the corset to fit the person,” said Powell, noting that all the corsets were custom-made. “If a corset fits properly, you shouldn’t have any bits sticking into you.” A veteran of many corset-heavy films, Powell is adept at talking actors through the initial discomfort of them. “It’s horrible putting it on first thing in the morning, but after a while your body warms up and it moves into place.” (She acknowledged, though, that it’s “never a good idea to take them off at lunch.”) 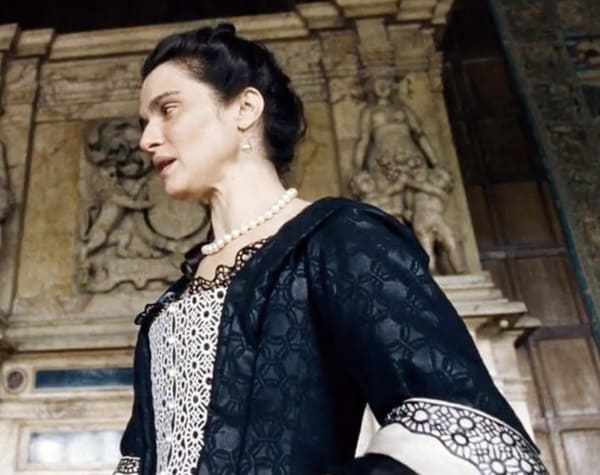 “Normally I do spend a lot of time on color. I love color. But it was quite nice to do something that was different. So because it was black I had to really look into different textures and also things that would light. That sort of worked terribly well within the story and within the settings, and economically actually we had very, very limited funds and time. So there wouldn’t have been time to have done court costumes as they would have been.” 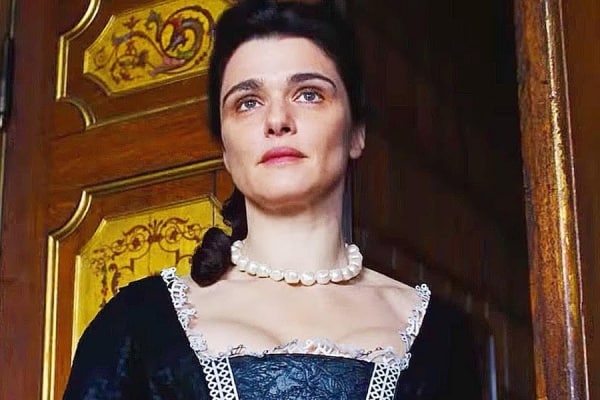 “Something I found that really helped me was a roll of fabric in a very sort of cheap shop that was black, laser-cut vinyl. It lent itself to being cut up and applied onto the costumes to give them those sort of outlines, so every time we see a sort of black pattern, that was what it was. Then I copied it in cotton and laser-cut cotton to create the lace. It’s sort of the positive and negative effect on all the court costumes. I think finding that one roll of fabrics inspired the look for the entire court, really.” 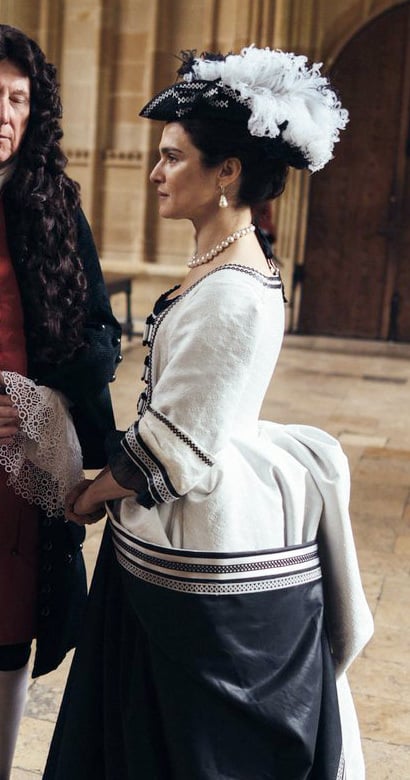 On Lady Sarah (Weisz) — “There was not much decoration on anybody, and she [Sarah] does have a little bit more than anybody else. I was playing with the fabrics on the stand, which is how I work, with the cutters. I drape the fabric and we mess around with it, and we get all the folds and the silhouettes of the overskirt. I was playing particularly with the patterns of the fabric and the stripes, and sort of moving them closer together, further apart, making chevrons of all sorts just to push it a bit further than the rest of them.” 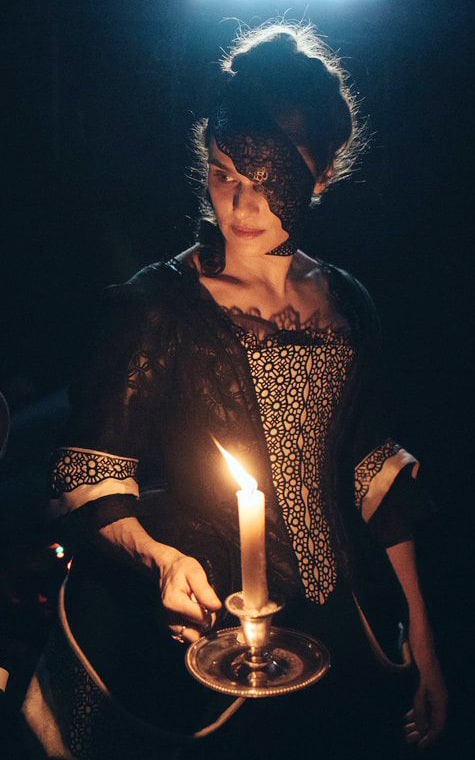 On the queen’s bedclothes — “It’s reversible. It’s velvet on one side, and on the inside I actually made it from a bed cover that I found. In England they’re called candlewick, but I think it might be called chenille here — those wavy lines and little tufts of cotton — which I bought on eBay. So the queen’s wearing an eBay bed cover.” 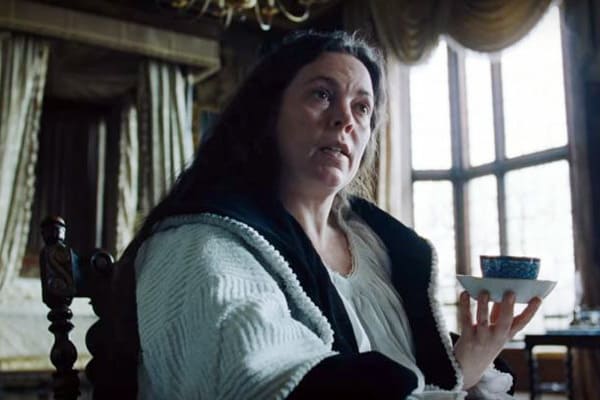 On the queen’s riding outfit — “This was something that was scripted. She puts on a contraption before getting on the horse and it was sort of like, what on earth is it? It was described that it went onto her legs and it covered her body, and she was strapped into it and it was — it was written as almost a fetishistic contraption really, but it was in order to help us stay upright on the horse. It’s a quite interesting sort of transference of power really, and the whole story’s about the fight for power and control and the sort of tussles between the three women. I think that scene very much shows the queen dependent on Sarah to actually get her into this contraption, and Sarah is rather in control. It’s a fetishistic moment, really. It’s somebody being contained. I think that was the point in the script.” 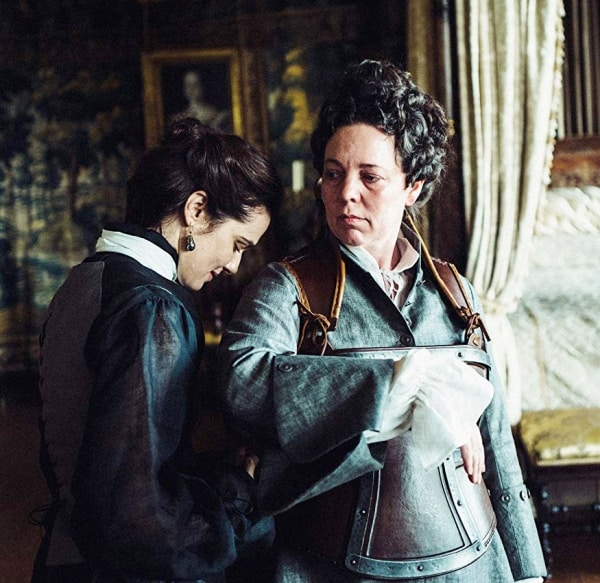 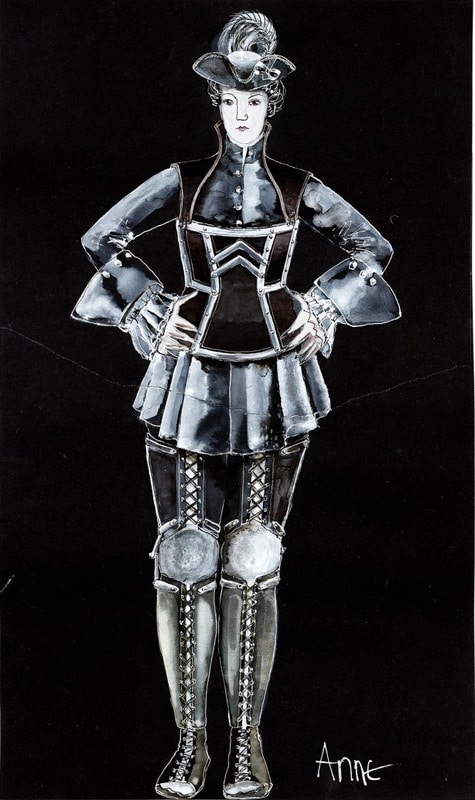 Production designer Fiona Crombie in Architectural Digest, “The Sets of The Favourite Serve Royal Drama — and Then Some”

“One of the key challenges was working within a really precious location,” explains Crombie of Hatfield House, the grand Jacobean estate in Hertfordshire, England, used as the primary filming location for The Favourite. Built in 1611 by Robert Cecil, First Earl of Salisbury and Chief Minister to King James I, this historical country home remains, according to Crombie, “one of the best-preserved examples of its kind in England.” 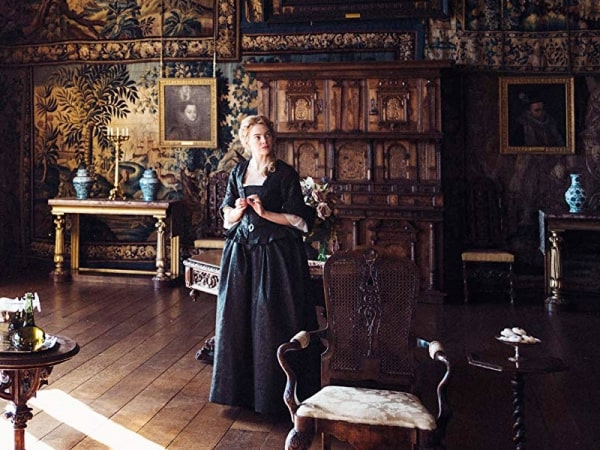 “Often you make decisions on where to put the money, and it felt like we needed to make sure we had really beautiful details and that the objects [the actors] held in their hands were really special,” says Crombie, who began her research for the project by combing through the Victoria and Albert Museum’s extensive catalog of historical decorative arts. “I was struck by the fact that [during the early 18th century] there was a high degree of craftsmanship and ritual.” 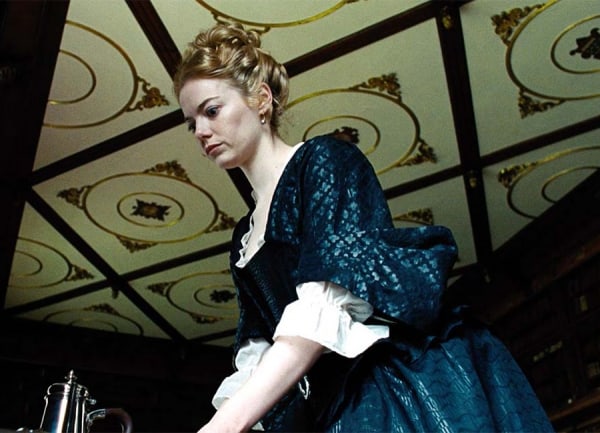 “We made a decision not to go with anything too gilt and had to maintain a relationship with Sandy’s monochromatic costuming,” Crombie says. “We wanted to keep it simple, which is why we also chose to not put an enormous amount of furniture in each room. They’re not big, clunky pieces so as to give the feeling of the actors in this large space. … We never wanted it to feel cozy. You see the ceilings and the bare floors and get a sense of the incredible scale. Even though it’s really plush, it’s not overstuffed.” 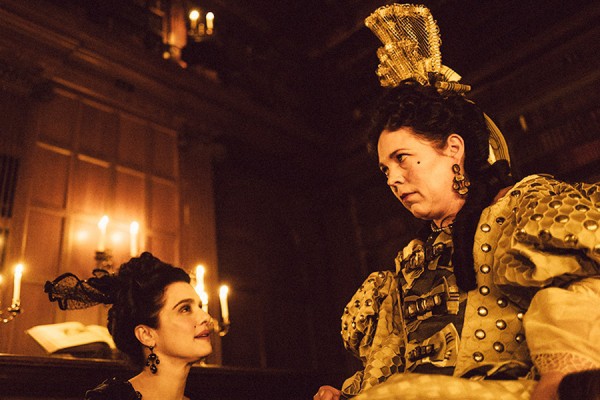 “The entire film was lit with candles,” says Crombie, whose team used more than 80,000 double-wicked tapers during the 42-day-long shoot. “We built tops to go on things so we could swap them out when the wax dripped down. It was more about wax management than fire plans.”

Did you get to see The Favourite in theaters?