The six-part miniseries The Essex Serpent (2022) on Apple TV+ is based on a novel by Sarah Perry, and I rather wish I’d read the book instead of slogging through all six hours. It’s not terrible, but it’s slow and moody and meandering, which IMO suits a book better than a TV show. Also, the minor characters are more fleshed out than the two leads, and I tend to think that’s a problem of the TV version because it would be weird in a book (I mean, really, it’s weird in the show!). But whatever, it was a rainy night so I plowed through the whole thing, and it’s visually attractive.

Claire Danes plays recently widowed Cora Seaborne, who’s an amateur naturalist and fossil hunter. Tom Hiddleston is a married vicar, Will Ransome, out in rural Essex where villagers are convinced a mythical sea serpent is killing people. Cora packs up her son and companion, Martha (Hayley Squires), moving them from London to Essex so Cora can study this “serpent.” Cora has also become entangled with her late husband’s doctor, Luke Garrett (Frank Dillane), who visits her in Essex. There’s a mystery story around the supposed serpent and related deaths. Then there’s a love story that revolves around Cora, because three people are in love with her for some reason. There’s also side stories about Martha’s socialist campaign to reform London’s slums and the doctor’s experimental heart surgeries. You’d think all that would be plenty to fill six hours, but I felt like the whole thing moved too slow and needed editing down. The story lacked focus and just wandered back and forth between these strands that didn’t connect very well.

At least the costumes, designed by Jane Petrie (The Crown season 2, The Nevers), are lovely! Set in the 1890s, the series does look right, with Cora wearing a range of both fancy dresses in London and more serviceable clothes in Essex. Filming happened between COVID lockdowns in the U.K., which meant that Petrie did most of her costume consultations with the lead actors via zoom and mail, but the fit looks very good. She noted in several interviews that COVID interruptions during the production actually gave her costume team more time for hand-sewing details.

The story starts in London, where Cora is dressed as a prim upper-class lady, and her husband Michael dies within the first few scenes. Jane Petrie said in an audio interview with Cosmic Circus:

“I designed all of her [London] costumes through Michael’s eyes. So I wanted it to feel that he chose all of her clothes, and he’d had a very sort of strong input, if not complete control, over all of her clothing in London. So that as she starts to kind of recover and come into her own place in Essex, all of her clothes and things could sort of start to open up and we, you know, she goes into recovery and everything sort of gets a bit lighter and a bit easier after the release of the all the tension of London.”

This wardrobe is really beautiful, even if it’s not what Cora might choose for herself. It definitely tells an important part of her background. In an interview with Below the Line, Petrie described her design process for these gowns:

“I was already starting something quite bold with the shapes of the sleeve heads because I rummaged around that date in the past. I thought, ‘let’s really go for it.’ They’re quite big, and we looked at origami, this Japanese influence that her husband Michael had in his house, and did a lot of folding. There’s a whole Japanese thread to the design of the London home that [production designer] Alice Normington was using, and I jumped right onto that. There’s a reference to a Japanese vase that is prepared with gold so I sort of ran with little threads like that. The Japanese thread is a bit of a twist into Victorian England.”

As Cora heads to Essex, the costume designer thought about the practicalities when planning costumes. Again in Cosmic Circus, she said:

“I wasn’t going to go and design Cora a whole new wardrobe for when she was in Essex, because it didn’t make any sense to me. All that made sense to me, in terms of the logic of the story, was that she was taking her London wardrobe because that’s what she owns, she was taking that she had some traveling clothes, which was the grey coat which had a sort of detachable hood, which would allow it to serve more than one purpose. And then I sort of built her a sort of a traveling wardrobe.”

Talking to Jump Cut Online, Petrie explained how she came up with this grey coat that Cora wears a lot throughout the series:

“I knew that the coat had to do several things, I knew there were plot points that it had to cover. It was going to have to be sturdy, it was going to get wet and muddy, I knew there would be a rain machine. We thought it would be good if the hood was detachable for a start, and it worked a little bit like a shawl. It was either that, or she’d have had lots of costume changes, which I didn’t want to do, I wanted it all to fit in one travelling case. So, there were a few things that we had to slightly engineer to avoid costume changes, so she was prepared.

By the time I found the cloth, all the mood boards were up and around us, and a lot of the research — we were in quite deep. It’s a misty grey, but because it’s got that red fleck and the black fleck through it — it felt like she could stand out but be part of that landscape as well. That’s something that needs to happen to her, she has to become part of the Essex landscape. It has an emotional impact on her and she starts to feel part of it. So, I didn’t want it to jar.”

Knitwear was an important part of the costuming for both the villagers and for Cora. In a Drama Quarterly interview, Jane Petrie revealed a theatrical hack they had to do because of historical complications:

“Cora wears a knitted jumper, but we hadn’t really taken into account the reality of the big sleeves and it had never occurred to me that I was never going to get it comfortably into a coat. We had to make another one that was sleeveless so Claire would be comfy in it. Some of it was a cheat, even though I wanted it to be real and able to work in any way you could. It’s not all dead comfy. The truth of the period is a bit cumbersome and lumpy.”

There’s one unusual formal gown that has an odd neckline for a specific reason in the plot. In Jump Cut Online, Petrie discussed this costume:

“With that dress, we made it slightly asymmetric with the crossover, we pleated up some calico and played with it on the stand and figured out how it might work. It was just problem-solving, really.”

IDK, I think the same thing could have been accomplished in a lot of other ways. This draws attention to it and is less historical.

Especially when you look at other things she wears, not formal, but still:

When Cora returns to London midway through the series, she wears a lot of black, although she never really wears full mourning, which she should have — that’s my one main costume critique. No matter how shitty the husband, a woman of her standing would still be expected to observe mourning dress for one to two years.

In London, if not in Essex, Cora does wear proper headgear. Petrie told Below the Line:

“The little city hats that Cora wears were mine. I’ve just been collecting them because they’re not in the costume houses anymore. They’re all a bit damaged and tired, and I thought it was time to start gathering them through all my working life.”

There’s one fabulous burgundy and black stripe evening gown that I couldn’t find promo pix of and couldn’t get great screencaps of.

Other character’s costumes are equally well thought out. Martha wears smart blouses and skirts, and she has a gorgeous chatelaine in several scenes.

Then there’s the vicar’s wife, Stella (Clémence Poésy). She’s an almost painfully sweet and also sickly character with a rather obvious storyline. The costume designer told Jump Cut Online that:

“Her costumes were influenced by Gustav Klimt’s wife Emilie Flöge — she was a great reference for Stella. I loved the smocking and the homemade element to the whole of the vicarage actually.”

Now, I looked at the few photos of Emilie Flöge (1874 – 1952) available, and while she did wear big, loose, caftan-like gowns, these outfits were most notably in bold graphic prints or trimmed with huge ruffles. She was very artsy and extravagant in her look. Whereas Stella is retiring, rather mousey, and obsessed with the color blue (which is apparently in the book). This Klimt painting, however, is a clear inspiration for a key scene of Stella’s:

“You can tell that a lot of her clothes are handmade, where Cora’s looked like — although they are handmade — they’re certainly high couture. Stella’s has a homeliness to them that isn’t there in Cora’s wardrobe, and then they reflect her emotional journey into blue as well as the colors get more and more intense.”

I see some Pre-Raphaelite / Arts and Crafts movement inspiration in Stella’s clothes. Most of her garments feature a lot of deep smocking, which was common on gowns from Liberty & Company, like these: 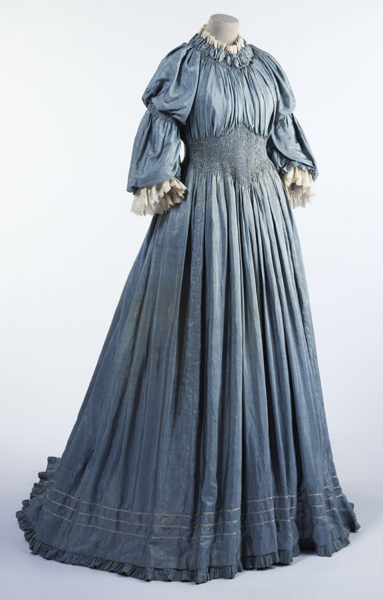 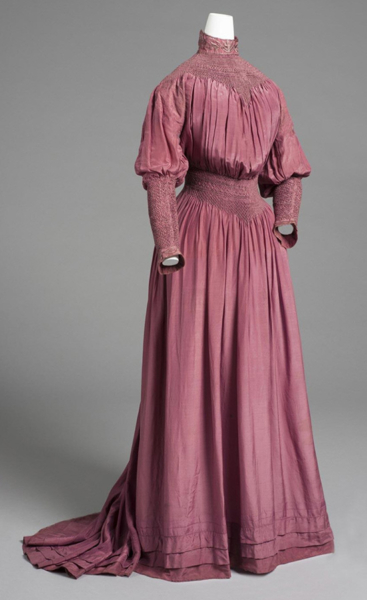 The men’s clothes are, as per usual, less interesting, though I know there are Hiddleston fans out there, so here ya go:

Have you seen The Essex Serpent or read the book?