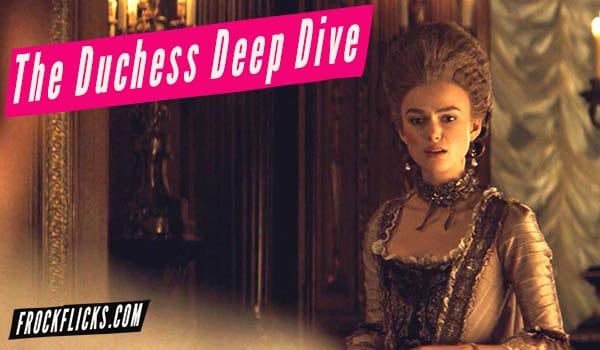 In this scene, Georgiana, Duchess of Devonshire hostesses her first big fancy dinner party at the side of her husband. It’s ONLY men in attendance and the talk is all politics, and Georgiana starts to show everyone that she’s got a brain by engaging in those conversations — except the duke doesn’t care, wanders off mid-dinner, and goes to shag a servant. Georgie catches him and has a sad.

It makes sense that Georgiana wears the most formal and traditional style of dress available, the robe à la française or sacque, for this event. This is her first formal event where she’s supposed to play the role of an adult all on her own two feet, with no parents in sight. Compare her more fashion-forward nightgowns/robes à l’anglaise with her wedding dress and her mother’s française.

You don’t see much of this dress on screen, as the scene is mostly shot in close-up. This is about the extent: 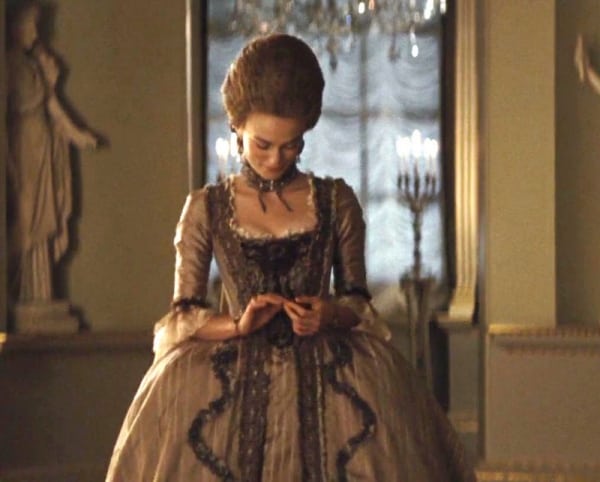 You can JUST see the back draperies on her right (our left) side, next to her waist.

Luckily there’s a behind-the-scenes shot, and photos from the dress when it was on display, to help us out!

The dress is made of a pale silvery/lavender silk, probably taffeta, with a narrow woven stripe in groups of four. The stomacher is trimmed with a dark purple fabric that coordinates with the sleeve cuffs; there’s a more medium purple trim on the “robings” (the vertical front edges of the gown, which goes from shoulder down to the the side front waist and down the skirt to the hem). Silver lace makes serpentine patterns on the skirt front; this kind of curvy pattern is more typical of the 1760s and early 1770s, showing again that this dress is going for an established, traditional style. That same silver lace is integrated into the stomacher and cuff trim. 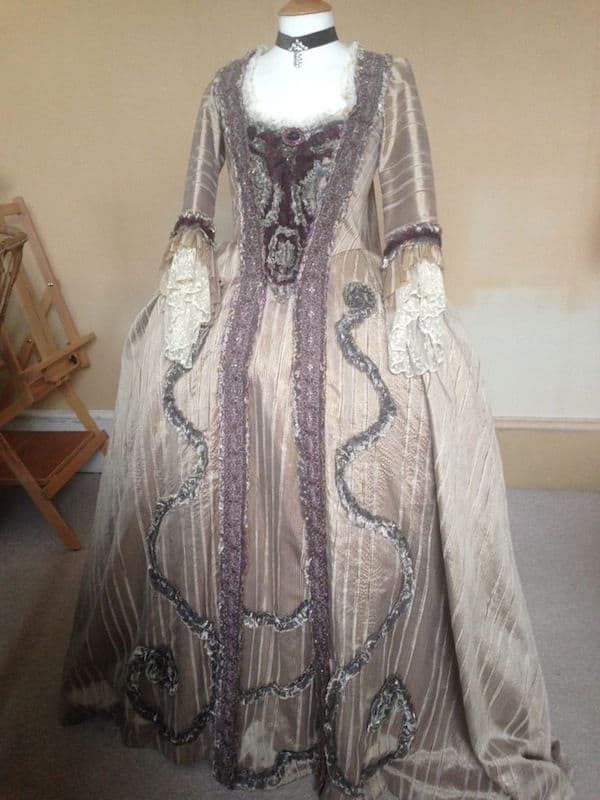 There’s more silver lace going horizontally across the petticoat, which really needs a wide, horizontal hem ruffle to my eye. 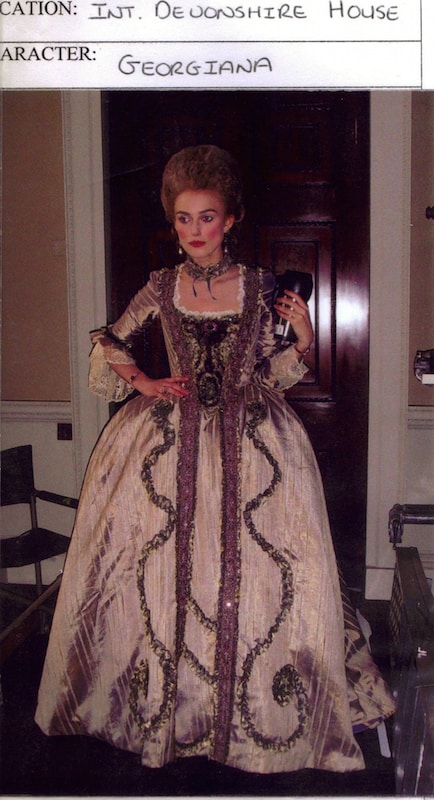 In this behind-the-scenes shot, the woven diamonds in the robings trim really catches the light – I was almost thinking there were silver spanges in there, which would have been stunning! 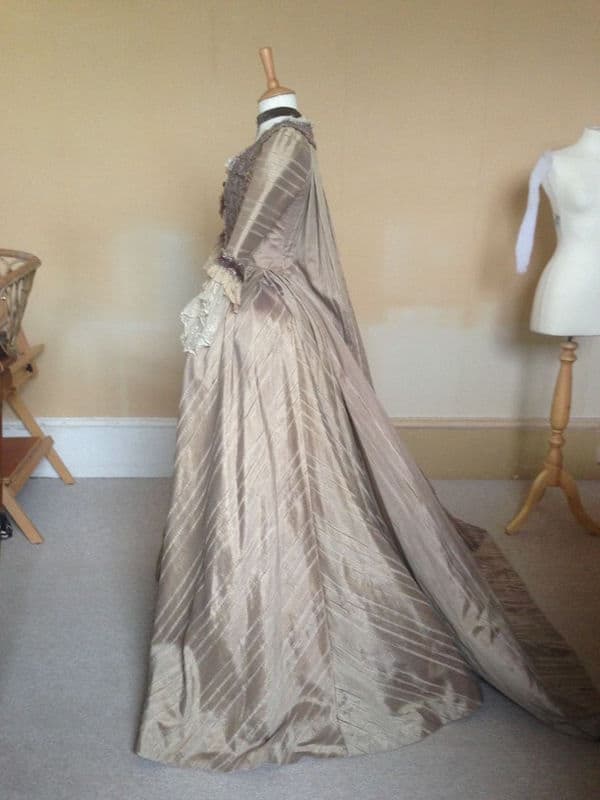 The side view shows the lovely way they handled the stripe, plus the horizontal stripe around the arm — a nice touch, as that was the most typical layout for this era — as well as the française back and short train that’s typical for this style. 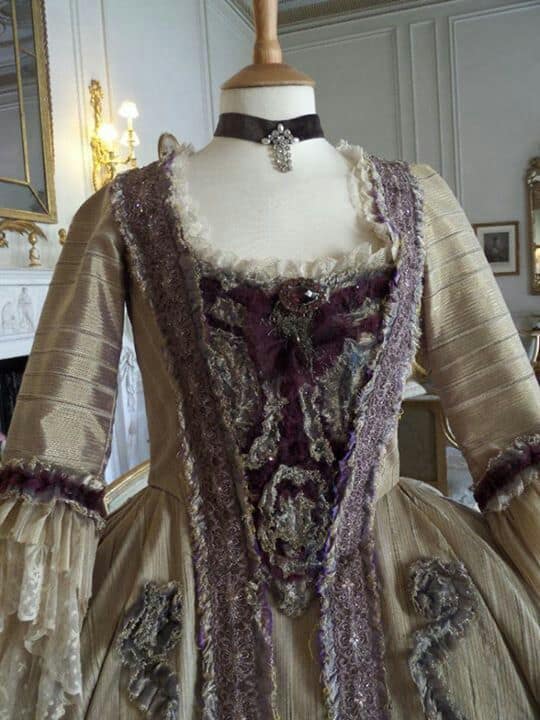 Here’s a close-up on all that trim. The dark purple looks like an organza or net, and the robings trim has a really interesting pattern.

All these purple-y colors look great on screen, and Georgiana looks formal yet muted — she’s no peacock here!

I LOVE the makeup and hair in this scene. 18th century makeup aesthetics were all about rouged cheeks and darkened eyebrows, and this looks great. For jewelry, she’s got some pearl drops hanging from another stones-in-setting, some kind of jeweled spray in her hair, and a ribbon/lace choker which has something sparkly at the center. 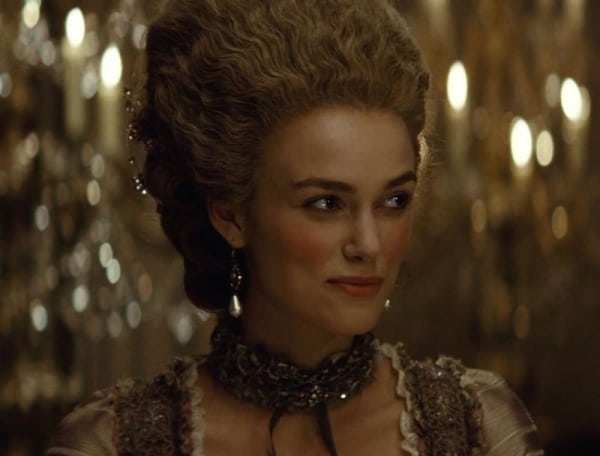 Georgiana’s hair is frizzed and then worn up in a high, fashionable style, but not so high it’s crazy macaroni OTT time. Once again, this film outdoes most others set in this era for getting the shape of the hair right, and most importantly, the side and back styling, which most productions fuck up. She’s got three large “buckles” (rolls) behind the ear, and presumably the back looped up. 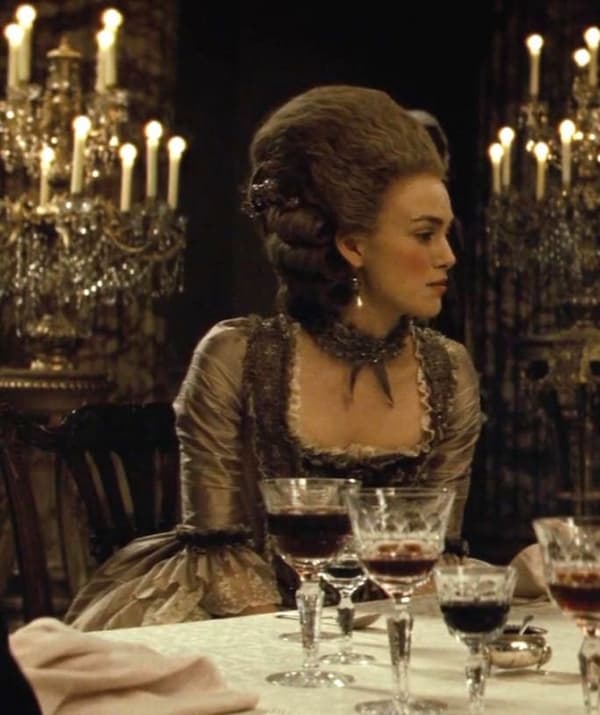 What’s your take on the dinner dress – yea or nay?