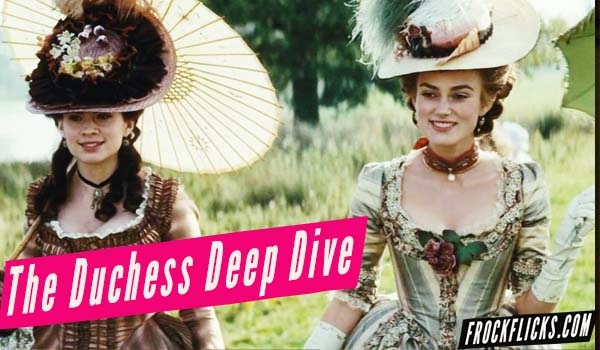 Today, it’s possibly the most loved costumes of the film: Georgiana and Bess’s stripey gowns! This scene makes the point that Georgiana is having lots of girls (and no male heir), so it should be around 1785-89. In reality, between the dress and the hair, this styles worn in this scene look more early 1780s.

First, let’s look at dress silhouettes over the decade. In the early 1780s, skirts were full and rounded and often worn lifted up (“retroussée” in French, just “up” in English):

By the second half of the decade, skirts became slimmer and the line was less poufy, with far fewer (if any) lifted skirts:

First, let’s look at Bess, who’s actually even more late 1770s than early 1780s, because she’s wearing the robe à la française, which would have been considered pretty formal and/or traditional by the second half of the 1780s. The main thing that defines the française was its long, loose, hanging pleats in back: Her française is worn tucked up into the pocket slits, a manner of wearing seen frequently that both creates a pretty line and gets a train off of the ground. In front, Bess’s gown has a closed front bodice — rather than a V opening over a stomacher. That and the use of stripes and verticals make the gown more fashionable for late 1770s/early 1780s. I will say the longer sleeve (wrist-length instead of 3/4) is more 1780s than 1770s. The gown is trimmed with what looks like layered self-fabric ruches, as well as lace. Now on to Georgiana’s dress. Her’s is a robe à l’anglaise (“nightgown” in England, but that term confuses modern people), much more fashionable for the late 1770s through the 1780s, but the looped-up overskirt makes it more late 1770s rather than later 1780s, when poufy was out: Now you may have heard that the way Georgiana’s overskirt is tucked up makes this dress a robe à la polonaise, but that’s a different style worn looser and cut without a waist seam.

The robe à l’anglaise has a waist seam that separates the skirt, which is pleated to the bodice | Gown, 1780s, Victoria & Albert Museum The polonaise style is cut without a waist seam, among several other differences. Read my research article if you want to know more! Robe à la Polonaise, 1774–93, Metropolitan Museum of Art Now, why do we love both of these gowns, but particularly Georgiana’s? STRIPES! Stripes were hugely fashionable in the 1770s-80s, and they just give such an extra oomph to all kinds of styles. But the filmmakers did a particularly good job with Georgiana’s dress: We’re in luck, because The Hidden Historian, a blogger who works at Berrington Hall, has a post with a gazillion high-res detailed photos of the original costume from when it was displayed there. The angled stripes on the bodice are fabulous, although not something you see too often in the period — usually they would be laid out straight up and down. But it makes Keira Knightley’s waist look tiny and it’s a super flattering line. The back is very beautifully cut, with angled stripes at the center back. You do often see rosettes (or bows) on dresses worn retroussée, like this polonaise, but they usually contrast rather than match | The Music Party by Louis Rolland Trinquesse, 1774, Alte Pinakothek The trim is a mix of self-fabric ruches, gathered lace, and faux “fly trim” | (C) The Hidden Historian I’ve run out of steam so look back at previous posts for discussions of the hairstyles — these are still very firmly late 1770s/turn of the 1780s. See my last post for more about this! I’ll talk about how mid- to late-1780s hair changes in the next post, because I think the film will finally catch up! But let’s admire those hats: And the embroidery on Georgiana’s gloves!

How much do you love the stripes on The Duchess‘s costumes?