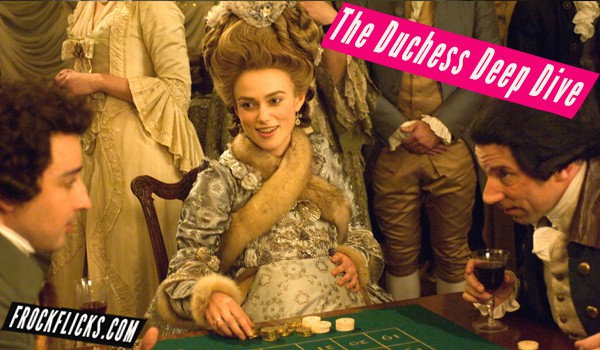 This is the second maternity gown worn by Keira Knightley as Georgiana, the Duchess of Devonshire, in the film. She’s much farther along (in fact, she gives birth on the same night this scene is set) — so let’s say full term — but nonetheless, she’s out at an evening card party. The ensemble Georgiana wears appears to be faking the look of a gown and overdress. Both are made from the same shiny silver damask, with the lighter background side used for the “underdress” and darker background for the “overdress.”

From the back, you can see that the gown is made like a robe à l’anglaise, with its fitted back, although there are no stitched-down pleats, so this is much more fashion-forward and French than the more traditional English nightgown version that preceded it (read more about this in our first deep dive post). You can also see that she’s wearing it over small pocket hoops, causing a sideways projection for the skirt. Images of the dress on exhibit are what tell me that this is probably one dress, sewn together, because the side front edges of the “overdress” don’t match up (compare the poufed/ruched silver trim along the bodice and skirt edges) — although maybe I’m wrong! I would say that alternatively, this is a stomacher and petticoat, but the “underdress” appears sewn together at the waistline, with the skirt pleated to the bodice. This rubs as me as “incorrect” — I’d rather see a petticoat with a stomacher over it, probably with a V point on the stomacher — but the 18th century is a wacky era, so it’s possible. I addressed the history of 18th century maternity clothing when talking about Georgiana’s first maternity dress. What I’ll add to what I said there are some excerpts from an article that focuses on maternity corsets in various periods:

“How women were able to dress would affect their role in public society, yet letters and diaries show little reduction in their daily activities. Evidence of what was actually worn is scarce, perhaps because the dilemma was not so great as we imagine — whenever clothing is mentioned or depicted we see women wearing normal garments adapted with the addition of one or two items … [Women accommodated pregnant bodies through three strategies:] adapting normal dress; adopting looser forms of dress; and strategic use of stays, jumps and waistcoats … This simple manner of adapting normal dress would have been an easy option for poorer women … whose kirtles were necessarily front-lacing, and whose habitually substantial aprons could cover the gap. For fashionable women, matching stomacher and sleeve sets were already a useful part of their wardrobe, allowing them to vary the appearance of their gowns without great financial commitment. The addition of a larger stomacher was a simple and economical solution, enabling them to continue wearing their most fashionable clothing, both for their own social pride, and because otherwise, by the time they were next able to fit it, the style could be outdated. This concern was common to all periods, and by the nineteenth century a bride’s trousseau contained several gowns which were left unfinished, in case adjustments to style or size were required before they came to be worn” (Harriet Waterhouse, “A Fashionable Confinement: Whaleboned Stays and the Pregnant Woman,” Costume, vol. 41, 2007).

The movie gown features several trims: that ruched/poufed bit along the edges, as well as silver lace and sequins on the undergown front/stomacher. She’s also got a big sparkly silver bow, and at least one jeweled brooch — and is that a tassel I see? Georgiana wears a fur stole wrapped around her neck and tied toward the back. That positioning looks very much like how large fichus (neckerchiefs) were worn in the 1780s and 1790s. Fur trimmings were very popular for cold weather (and were usually thought of as adding a central/Eastern European or Ottoman touch); and as the image below shows, fur could definitely be worn as an accessory. A fur stole | A trompe l’oeil with a portrait of Mrs. John Faber the younger, the engraver’s wife, after Thomas Hudson, Sotheby’s.

Georgiana also has lower sleeves, which in the period would have been removable. They are made of silver velvet, button closed, and trimmed with the same fur as the stole. These remind me of the painting below, which is a few decades earlier, but a similar style. Note the bow on the inside elbow, which is a very typical trim and placement for the 18th century. There’s also a pleated cuff from self-fabric, and a silver lace ruffle.

Those lower sleeves look right out of Charles-Antoine Coypel, Portrait of the Marquise of Lamure, c. 1732-5, Worcester Art Museum. About 40 years earlier, but plausible!

Finally, the hair. Once again the hair designer/stylists knock it out of the park. Not only is it pretty and big, it captures the slightly egg shape of hairstyles that’s specific to England in this era. Stay tuned for more deep dives from The Duchess!