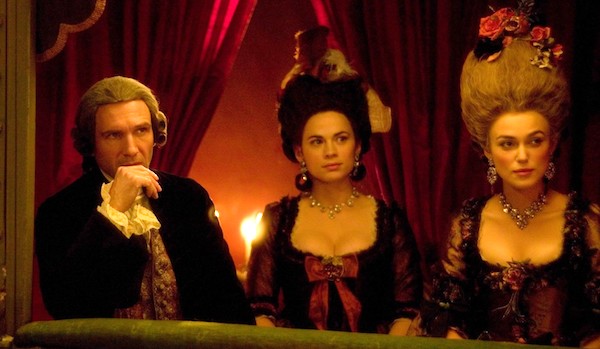 I’ve been putting off writing more posts in this series because while the next couple of costumes are beautiful, they’re more of the same. So I thought I’d do a quick fast-forward post where I share those costumes, so we can move on to the more 1780s-type dresses that happen in a few scenes. If you’d like to read more about the styles worn here, including dresses and hair, check out my earlier posts, which have lots of research.

This is the “montage of short scenes in which Georgiana and Bess are besties.” First, it’s awkward dinner with your BFF and hubby: 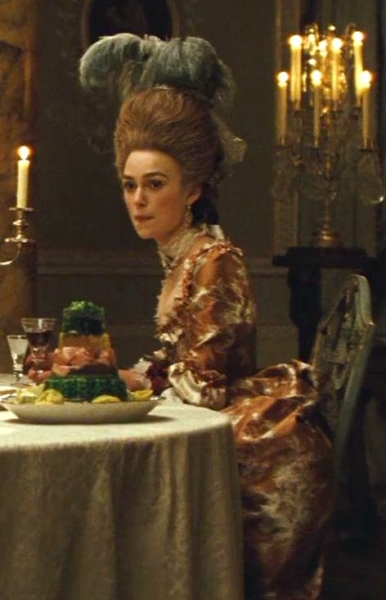 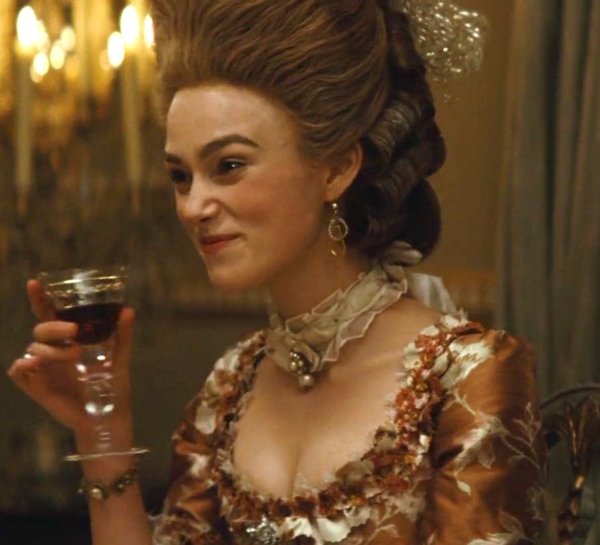 It’s not my favorite but the color looks good on her. 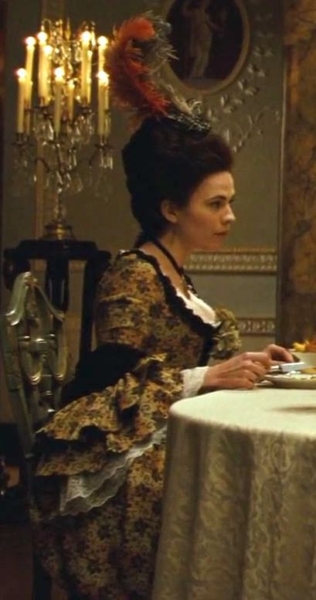 Bess is in black and yellow. Those sleeve ruffles are very early 1770s at the latest. 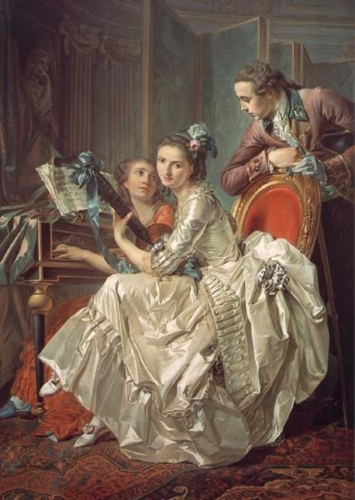 More fashionable would be just-past-the-elbow sleeves with a pleated or gathered ruffle placed on top | The Music Party by Louis Rolland Trinquesse, 1774, Alte Pinakothek 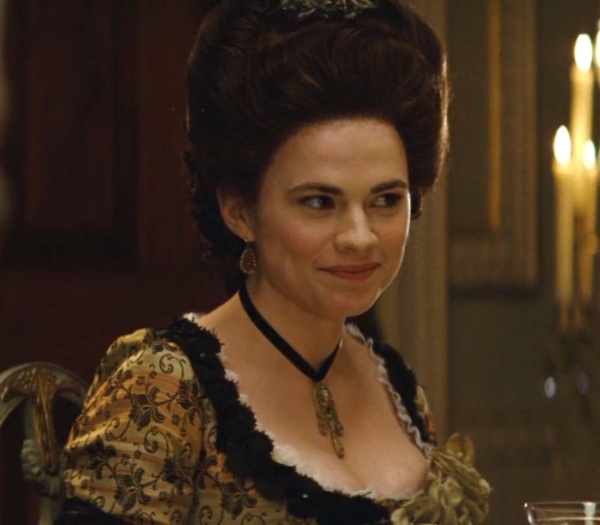 A subtle stripe in the weave.

Next, Bess comes to stay: 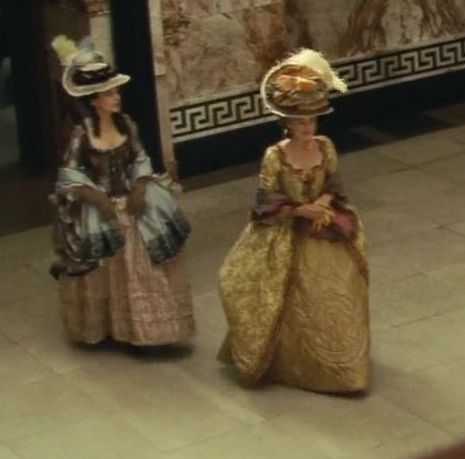 At first I thought Bess was in a too-long jacket, but you’ll see shortly that it’s a dress pulled up through the pocket slits. Georgiana is in a quilted petticoat. 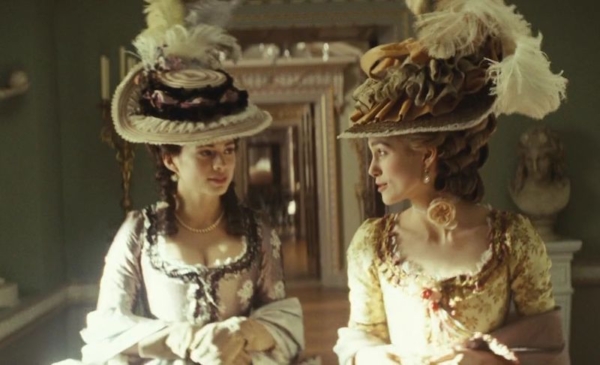 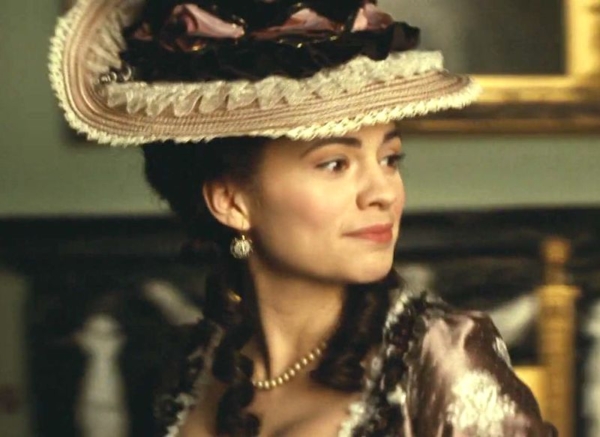 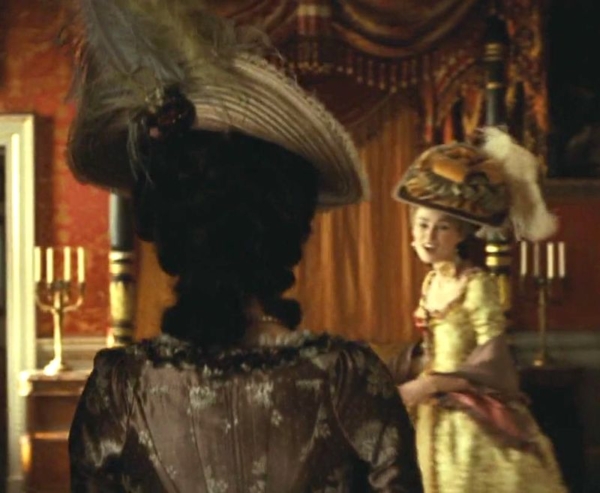 Bess’s dress is fitted in back. Georgiana’s hat is epic. 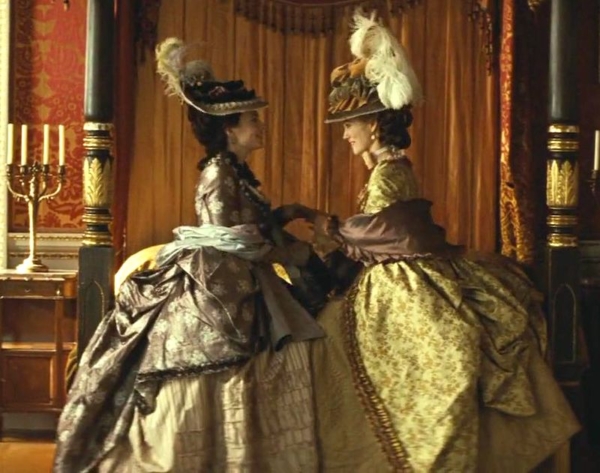 Now you can see both have their dresses pulled up. Historically, these would be pulled up with ties OR looped through the pocket slits (openings in the dress to reach your pockets) as shown here. 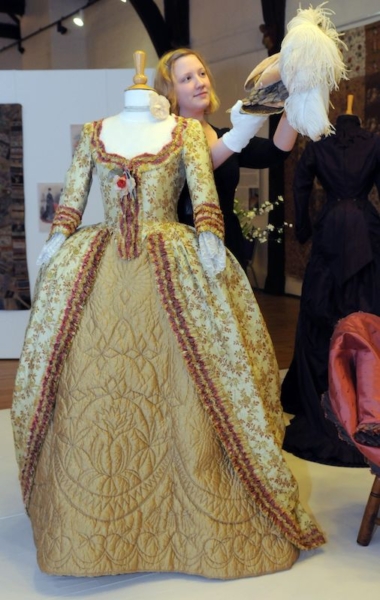 Georgiana’s dress on display. That quilted petticoat is beautiful! 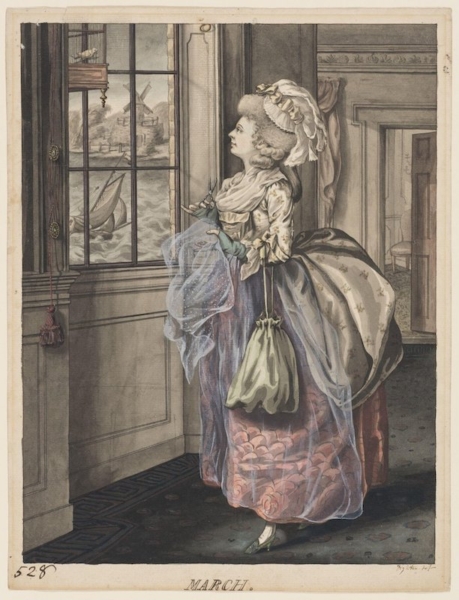 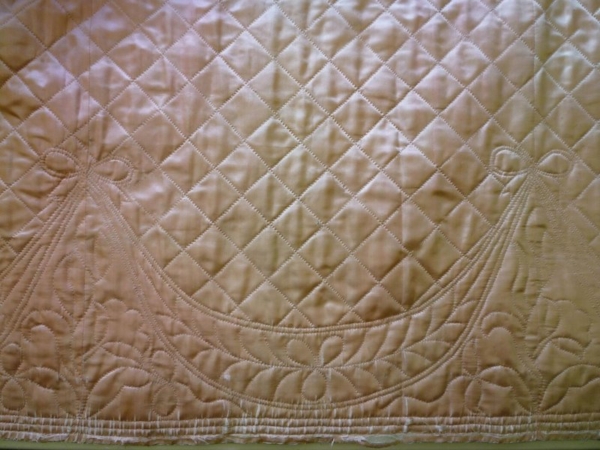 Next, we go to the opera! 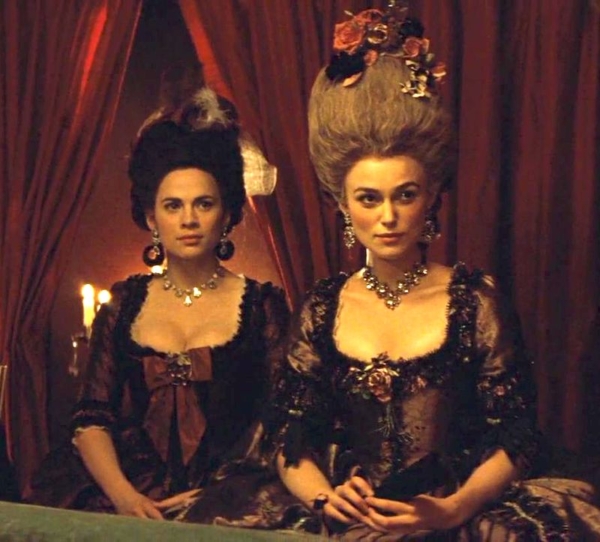 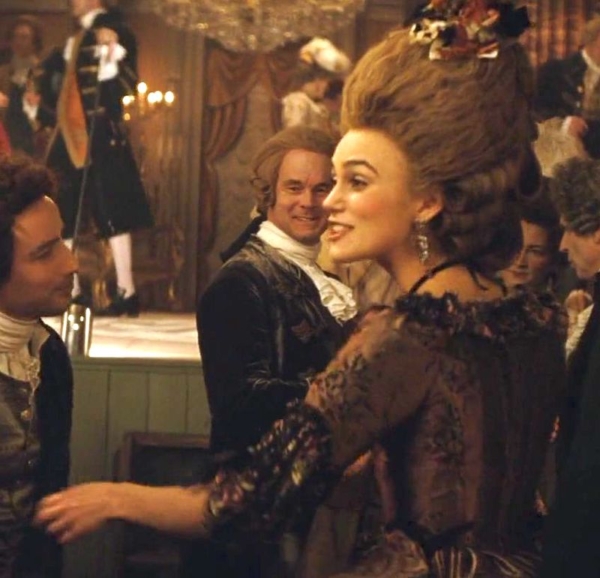 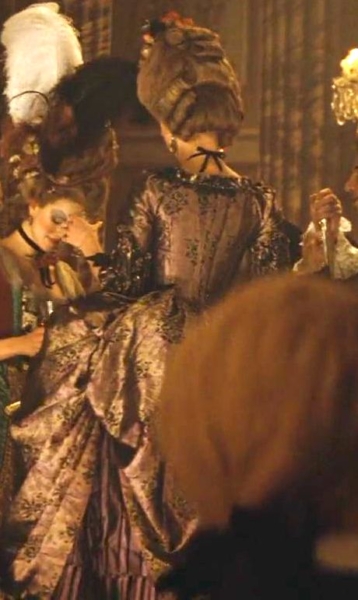 Georgiana’s dress has a fitted back, and the skirts are worn pulled up again. Also, look at how good the back of G’s hair is!

Another view of the pulled-up skirts. Very fashionable for the 1770s! 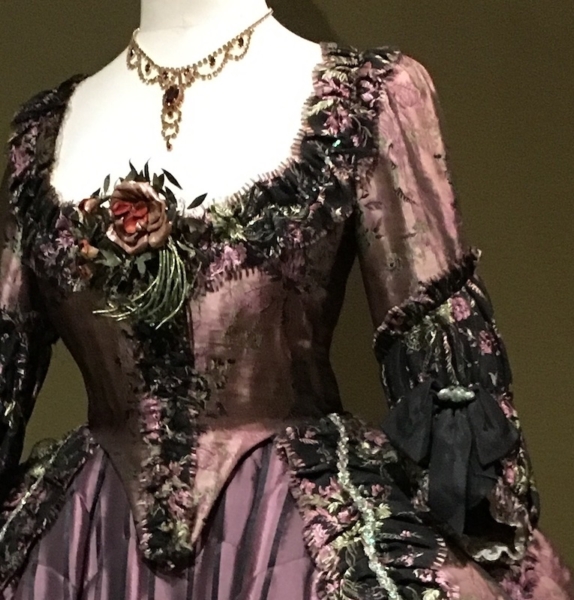 Clearly a lot went into trimming this dress! 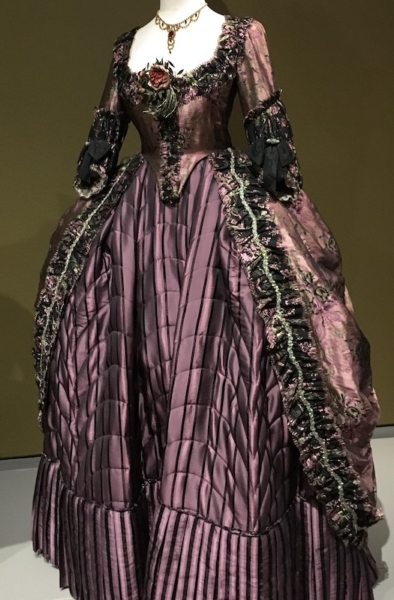 The quilted petticoat is pretty but weird. It’s almost art deco? It’s a striped fabric and then quilted in waves. 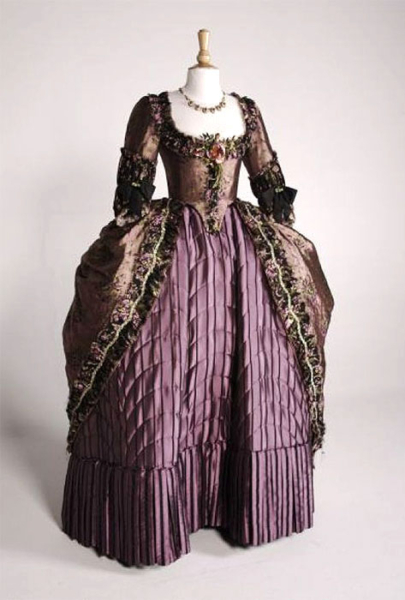 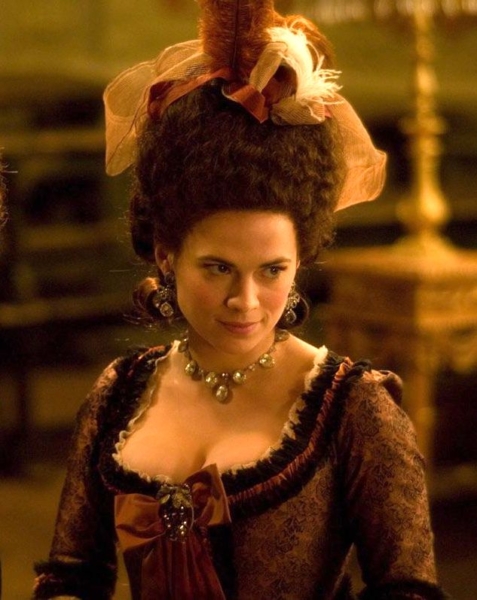 Bess is in an orange-y brown brocade. 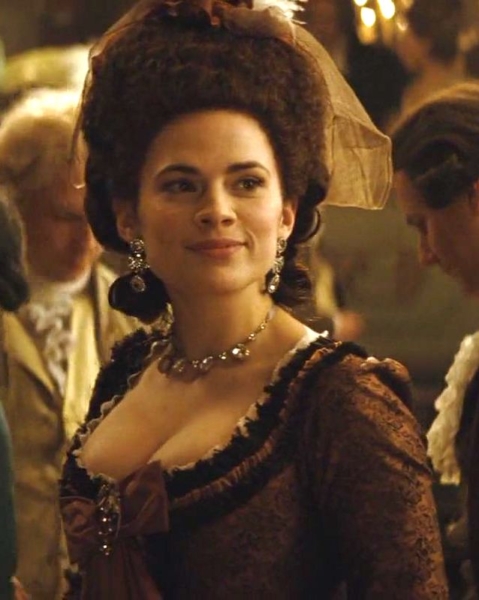 This is very typical Bess-wear so far. 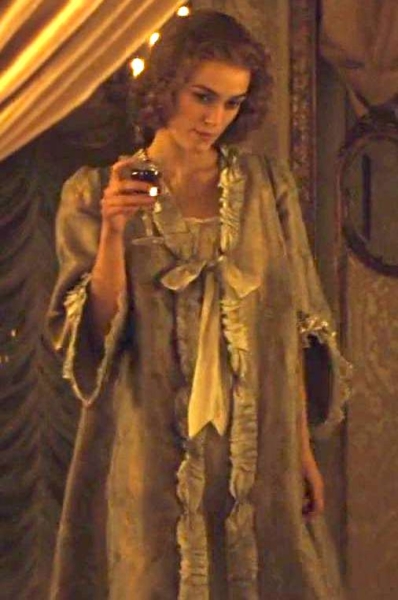 In dressing gowns, aka banyans. Georgiana’s is ruffly. 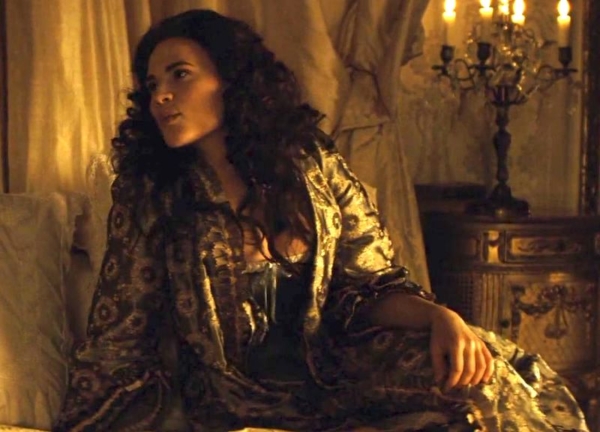 Bess’s almost looks like some kind of Middle Eastern textile? Which tracks, dressing gowns were inspired by Middle Eastern/Asian clothing and so had exotic associations. 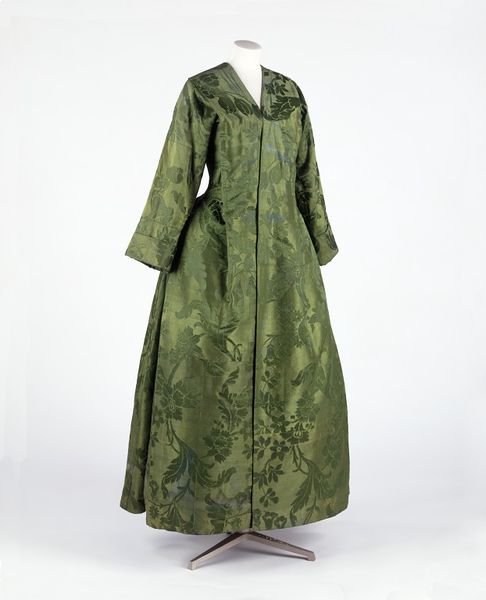 Next time – the chemise à la reine! Sort of!

Got questions about any of these costumes? Details you want to savor? Let us know in the comments! We’ll be back with more research in our next post.