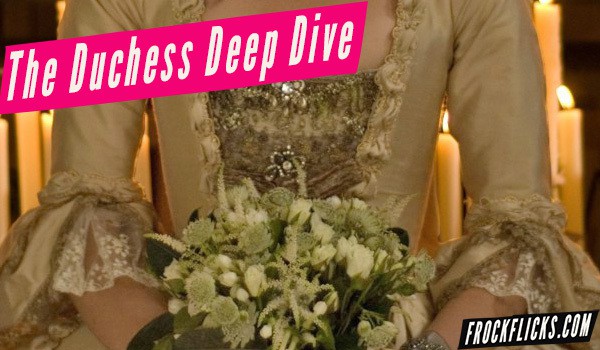 And now we come to it, probably the biggest dress in the movie: Georgiana’s wedding dress. Georgiana married the Duke of Devonshire on June 7, 1774. According to her biography by Amanda Foreman, “She wore a white and gold dress, with silver slippers on her feet and pearl drops in her hair.”

The style shown in the film is the robe à la française (in French), known as sacque or sack in England. It was a long established style and the dress to wear for a formal occasion.

Here’s your basic française/sacque. The dress is open in front in a V shape to the waist, then an upside down V shape to the hem. Underneath would be worn a stomacher (a V-shaped piece) and petticoat to fill in the gaps. The back of the dress has two long, stacked box pleats that float away from the body. The bodice front and side front is fitted. It was usually worn over side hoops that made the hips look bigger. The sleeves were elbow-length and worn with stacked ruffles. 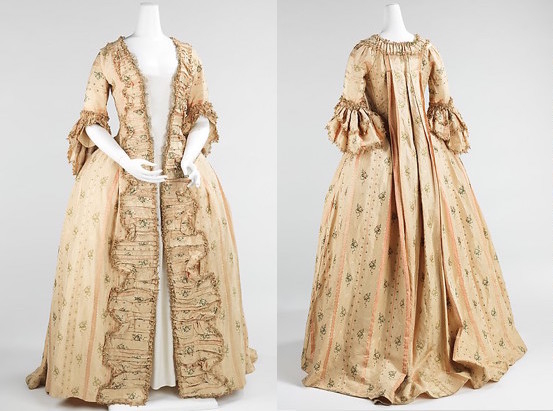 For Keira in Georgiana’s dress, the filmmakers made a sacque out of ivory silk taffeta, trimmed with gold: 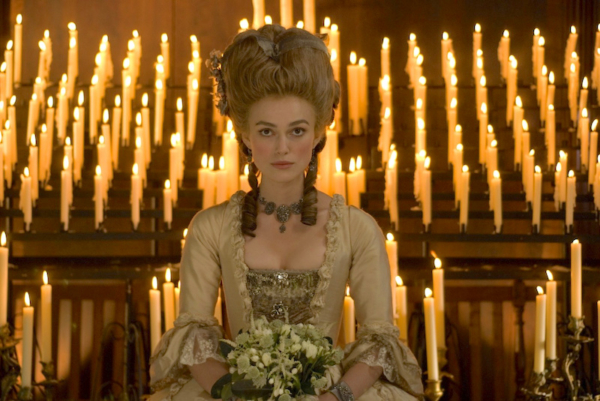 They were clearly inspired by this surviving robe à la française at the Victoria & Albert Museum. This gown is from the late 1770s according to the museum (with alterations done in the early 19th century). This bodice style is more typical of the 1780s, when the style was to have a bodice that closed entirely in front. This dress is also missing whatever originally trimmed the sleeves. 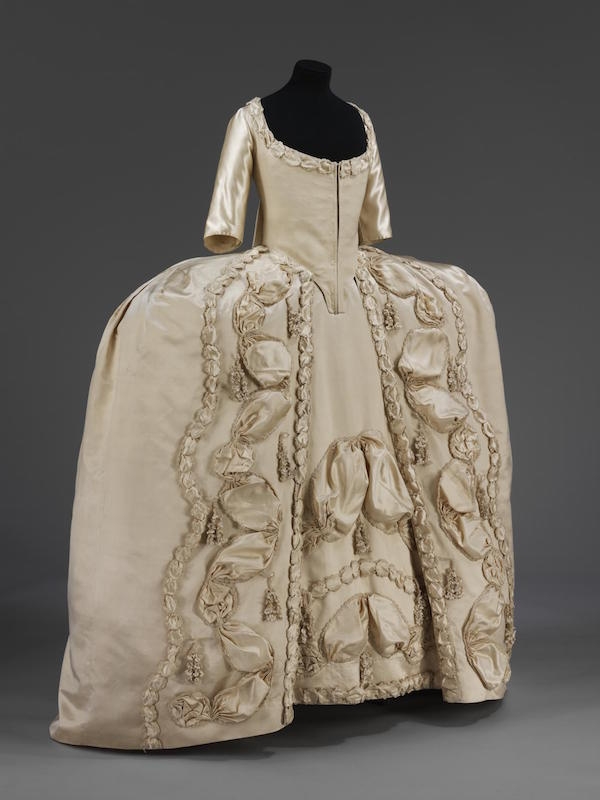 The other main change is that the original gown was made for MUCH wider hoops than Keira/Georgiana wears in the film: 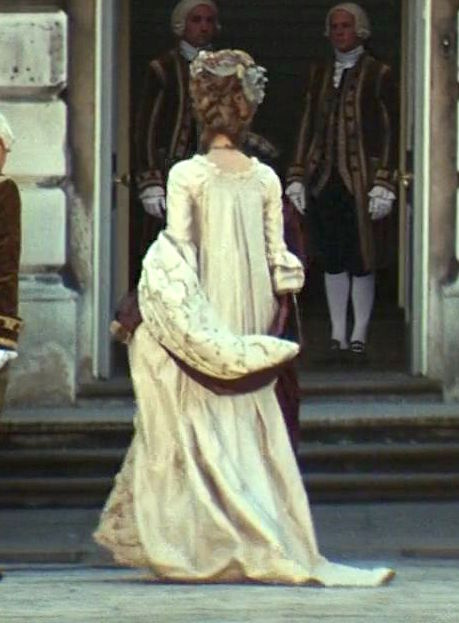 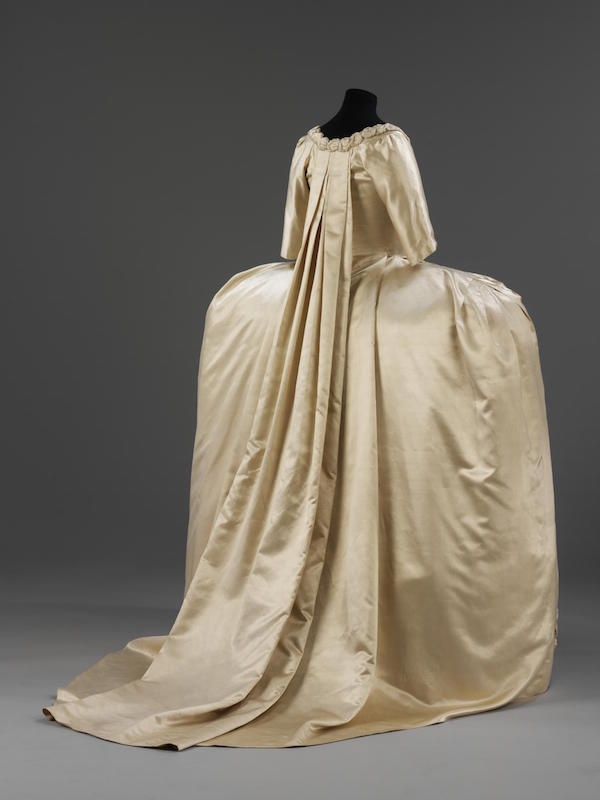 Although looking again, I think they must have taken off her hoops for the carriage scene (she’s just gotten out of the carriage in the above and below shots): 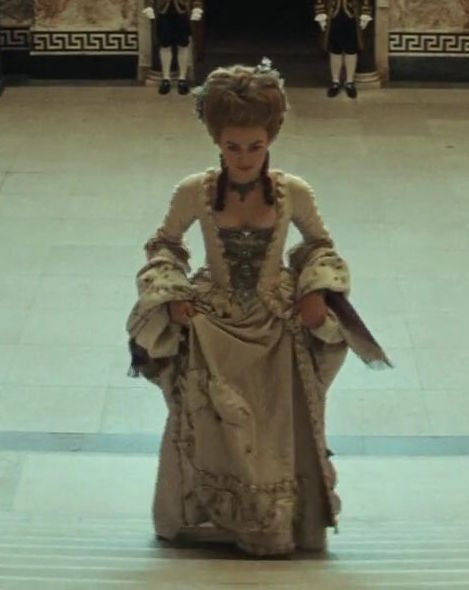 Because compare that with this: 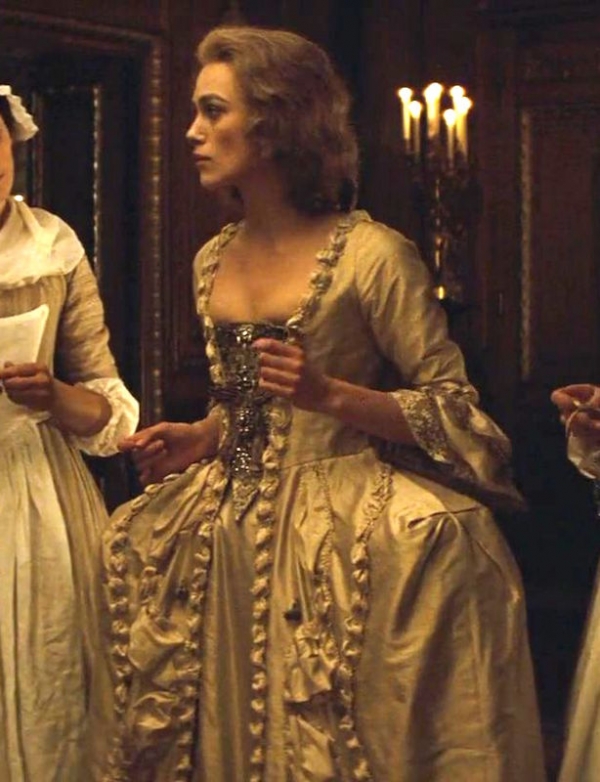 I’m really impressed with the craftsmanship on the movie gown. Compare the stitched-down pleats in back: 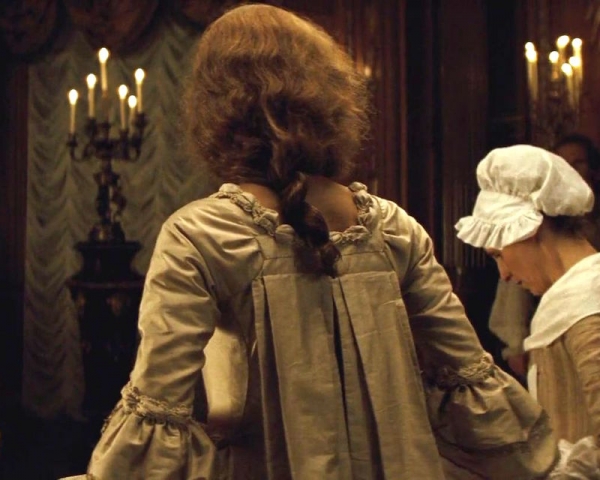 While this isn’t on the original: 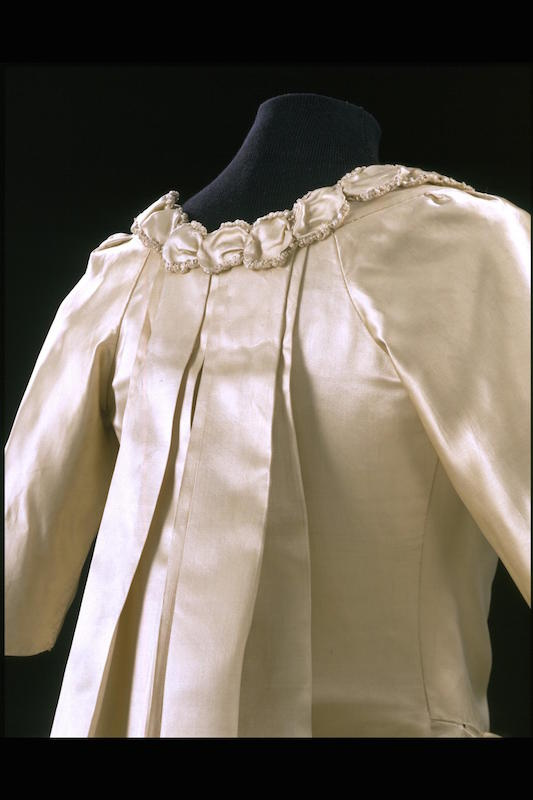 It is something you see on a lot of these dresses:

The trimming on the film dress is made of self-fabric, meaning they used more of the same silk taffeta. They used strips to make little puffs in vertical and horizontal lines, then larger puffs in zig-zags down the overskirt sides and across the petticoat. 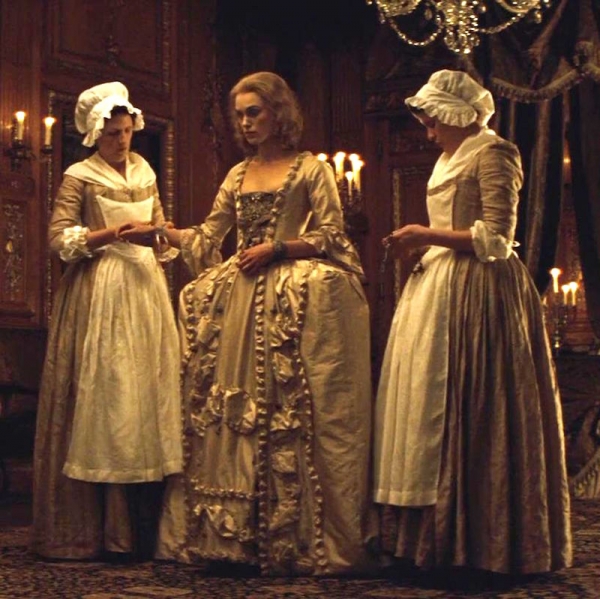 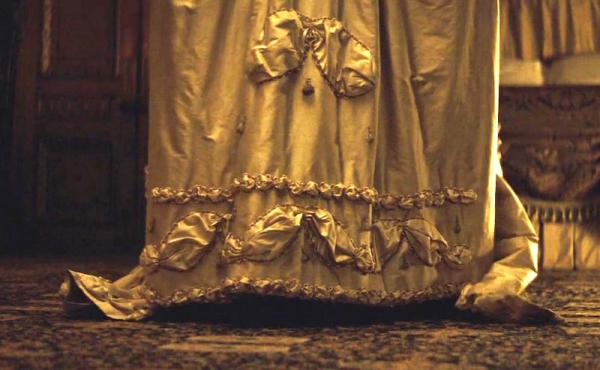 They basically literally translated the trim from the original gown, which, props! 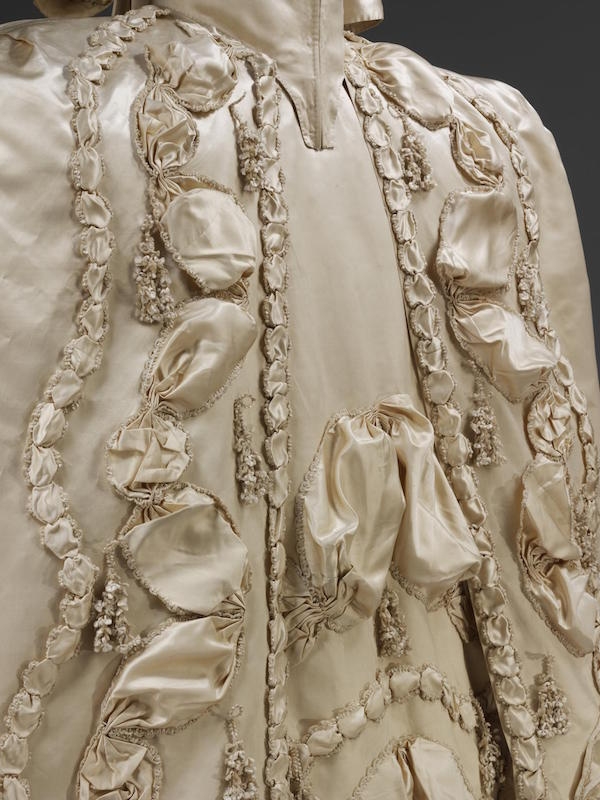 The puffs are edged with a looped trim in the same color: 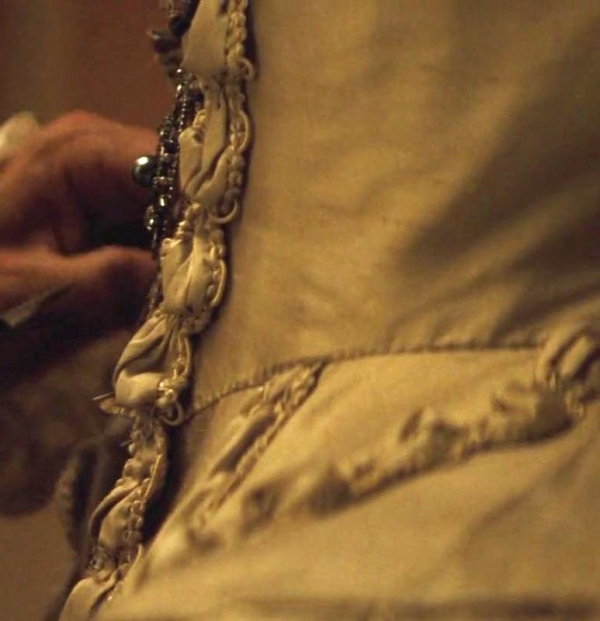 Again, straight out of the original. Really the only change in terms of skirt trim is that they made the hanging tassels gold on the movie dress, which I think is there to tie in with the gold stomacher. 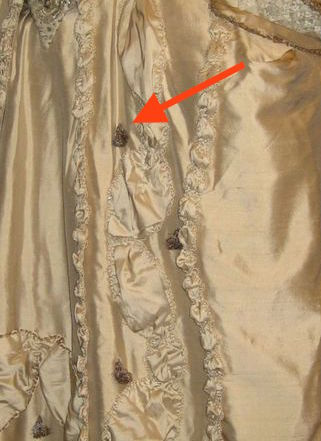 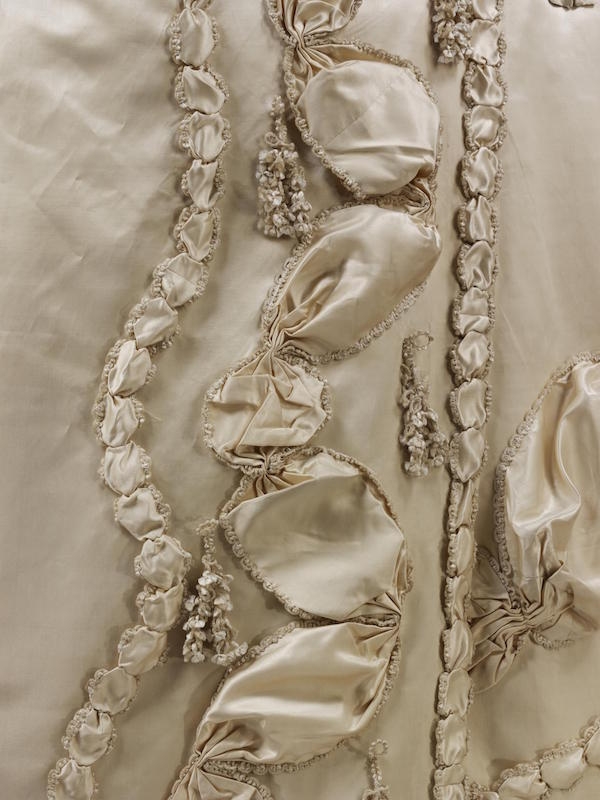 The stomacher is the gold triangle, which appears to be pinned or basted on top of Georgiana’s corset. You do see decorative stomachers like this, although more often you’d see the stomacher matching the gown and/or petticoat. 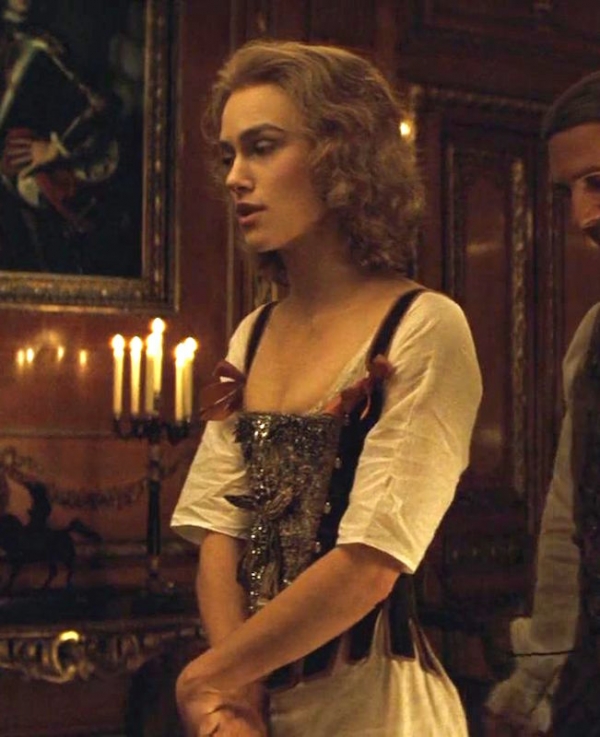 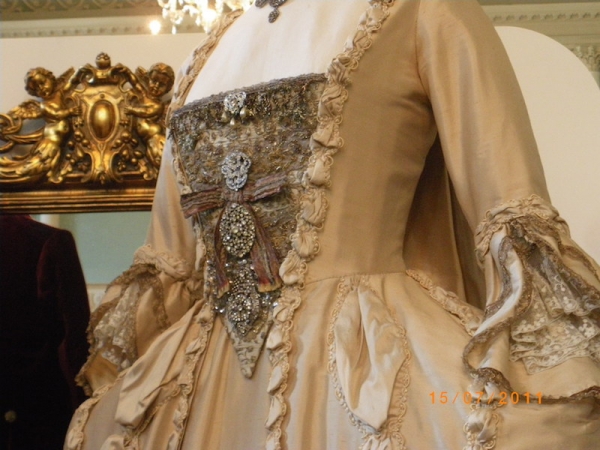 The movie dress had to be made to be taken off, as a key post-wedding scene has the duke take over from Georgiana’s servants in undressing her. According to the designer:

The duke uses scissors to cut the dress apart. This is historically accurate. Gowns in this era were usually pinned or basted closed. If you used basting stitches, you would need to cut those threads to get the dress off. 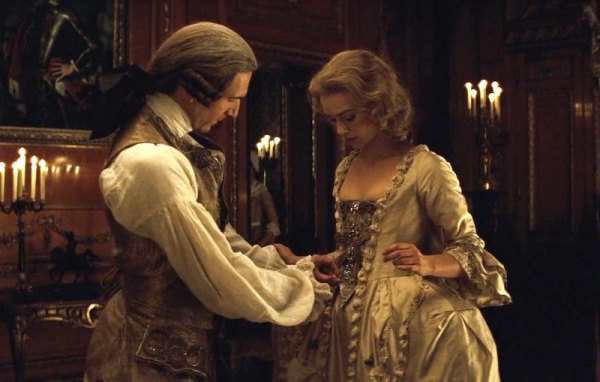 Here’s the back of Georgiana’s stays, as well as her hoop and pads. The cage-y hoop isn’t something you see as often as ones made of fabric, but they do exist. 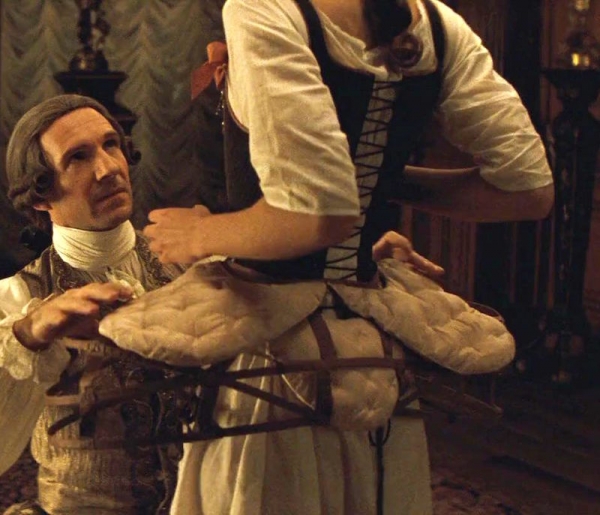 There’s a couple in French museums, like this one at the Musée des Arts Decoratifs in Paris.

Finally, let’s talk hair! The hair in this film is excellent. The back of her hair should be a little bit more distinct from the front and sides, but otherwise, they got a great silhouette. The powder is a little patchy, but hey, they actually used some powder (clearly they weren’t willing to commit to a full powdered look)! 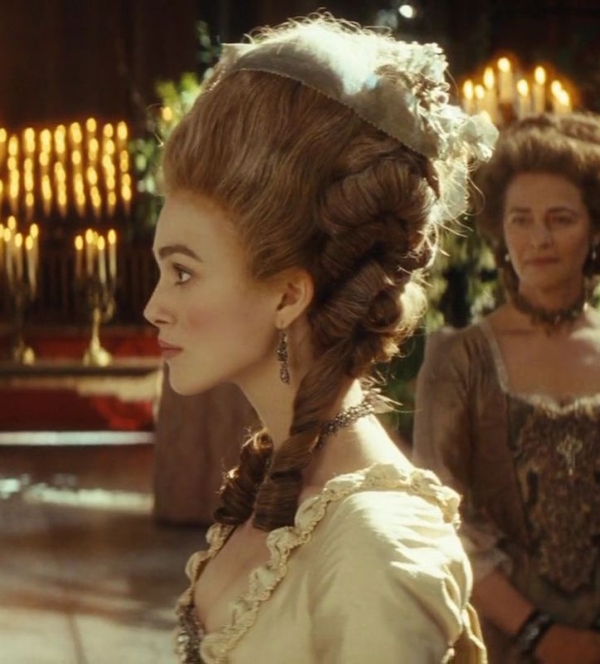 Compare her hair to this drawing from the same year: 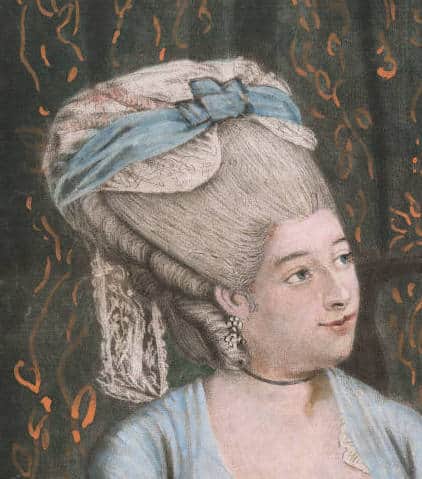 The back is really the only place it gets a little fudgy. The back hair SHOULD be looped up loosely, like in this bust of actress Mademoiselle Luzy at the Musée Carnavalet: 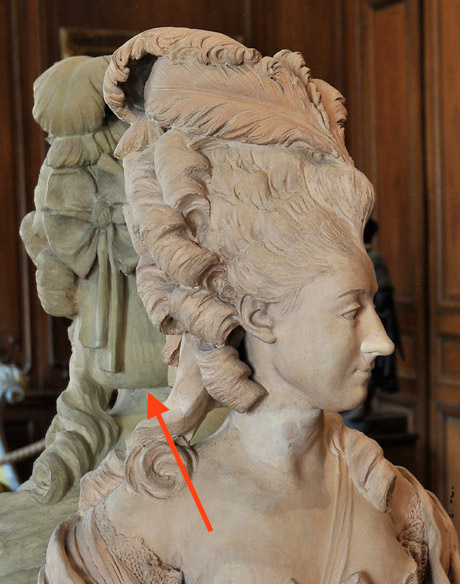 Instead it’s a little less distinct back there:

The other question I have that’s hair-related is that when the Duke arrives to undress her, Georgiana’s hair is combed out smoothly. Giving them the benefit of the doubt, I hope they’re implying that her lady’s maids have taken down her hair and combed it out. Because ladies didn’t wear full wigs in this era, so they’d better not be implying that her “real” hair looked like this underneath! 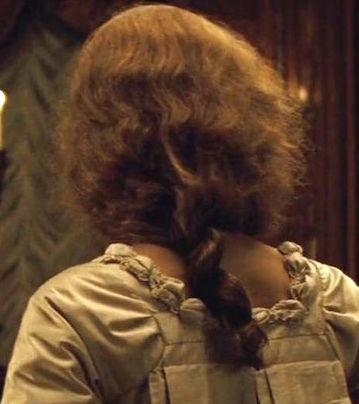 What’s your thoughts on Georgiana’s wedding gown and hairstyle?