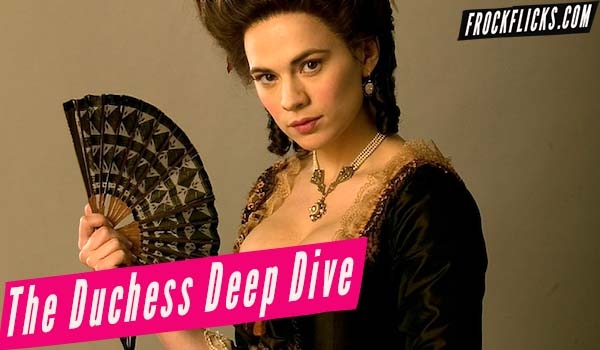 And finally, we meet Bess! Lady Elizabeth Foster became good friends with Georgiana before becoming her husband’s mistress (and, after Georgiana’s death, his wife) — AWKWARD.

In reality, Bess and Georgiana looked very alike, and played that up too: In the film, she’s played by Hayley Atwell, whose dark hair contrasts with Keira Knightley’s blonde and so helps the audience distinguish between the two (because, apparently, otherwise we’d get confused?): Bess met Georgiana in 1782, so I’m assuming that’s about when this ball is set — in which case I am now REALLY questioning Georgiana’s huge Marge Simpson hair, as hairstyles had become much lower by then.

Bess is wearing a dark orange-brown gown, which I assume is a nightgown/robe à l’anglaise, although we never see it from the back: Just like Georgiana’s blue gown, we only ever see Bess from the waist up on screen: The focal element is the lovely trim around the neckline: Looking closeup, it’s made up of two rows (one shorter, one longer) of gathered taffeta, topped with a fringey tulle layer, and then “rococo trim”; the neckline is edged with lace: It makes a great effect on screen, but I have to laugh because I and every other costumer I know has that same lace.

Here it is at Mood Fabrics in white, but I’m sure you can find it many other places too, including in my stash.

These kind of layered trims were super popular in the period: Dress, 1778–80, French, Metropolitan Museum of Art – click for a bigger version, or link through to get super high-res, zoomable photos! Dress, 1775–80, probably British, Metropolitan Museum of Art – click for a bigger version, or link through to get super high-res, zoomable photos! Note that that stomacher (the solid peach center section with all the trim on it) is, I think, a modern repro.

Modernly, we call the woven trim with the various loops and tufts on it “fly fringe,” which as I heard from someone at Colonial Williamsburg came from someone there who fished and who noticed the similarity to modern fishing lures. You can see a number of examples at the 18th Century Notebook site (which is a gold mine), and a number of people have been teaching classes and writing blog posts about recreating it — just google “18th century fly fringe.” A historical example of what we modernly call “fly fringe”: Cuffs, 1770s, probably French, Metropolitan Museum of Art – click for a bigger version, or link through to get super high-res, zoomable photos!

Modern “rococo ribbon” (named for the artistic movement of the 18th century) derives from this trim, and works well as a modern reproduction that doesn’t involve literally hand-tying all those little tufts: Rococo Ribbon via Aliexpress – personally I think this kind of woven-swoopy-things-through-the-main-chain make a better effect.

Once again, luckily this dress was put on exhibit, and here we can see the beautiful trimmings on the skirt that never made it to screen: Via Glass of Fashion Once again, the hairstylists have knocked it out of the park on Bess’s hair. The hair designer for this film is Jan Archibald (chief hair stylist on Interview with the Vampire, Rob Roy, Sense and Sensibility; hair designer for Gosford Park, Arsène Lupin, Parade’s End, Taboo; department head hairstylist for John Adams), Stephanie Hovette (Arsène Lupin, John Adams) did wigs, and Loulia Sheppard (hair stylist for Gosford Park, Possession, Vanity Fair, The Phantom of the Opera, Mrs. Henderson Presents, Amazing Grace, Elizabeth: the Golden Age, John Adams, and many more; hair designer for The Three Musketeers and Victoria & Abdul) was Keira Knightley’s hairstylist.

Compare the side of Bess’s hair: With these contemporary images (which, granted, are from a few years earlier, but clearly they’re not ready to move the hair into the 1780s yet): Finally, I’m no jewelry expert AT ALL but these earrings totally ping my “Georgian!” antenna. Feel free to weigh in! Get excited, because next up are the STRIPEY GOWNS!! You KNOW you’re excited to see more of these!

What do you think about Bess Foster’s ball gown?