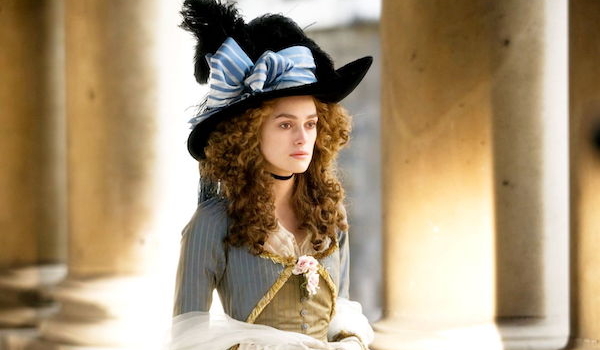 Keira Knightley plays Georgiana, Duchess of Devonshire, the leading figure of fashion in 18th century England who had a crappy marriage and interesting life. I was pleasantly surprised to really, really enjoy this movie after hearing so many friends disliked it. Okay, granted, you have to accept that it’s Keira with her scrunchy-faced acting and figure that just doesn’t suit 18th century costumes (and looks nothing like the lush beauty of Georgiana, but most movie-goers won’t know that). I’ve read the popular biography of Georgiana and was happy to find that the movie got the major points of her life correctly (although I was surprised that they left out her gambling addiction, which is pretty important). Of course, the movie is a downer, so don’t go looking for an upbeat romp… I thought the costuming was 99% STUNNING. It was SO refreshing to see a feature film where the costumer actually tried to get it RIGHT, rather than trying to put their own spin on things (in service of the plot/for no apparent reason). There were a few things here and there that stood out to me as not perfect: I thought this wig was too pointy and wished they’d shaped the lace frills on her wedding dress correctly. But there was so much that was done right it far outshadowed those few negatives! The wigs were STUNNING, especially the hedgehog hair. Almost all the gowns had the correct silhouette, fabrics, and trims. The hats were outstanding. The shoes were perfect. All of the extras were gorgeously and, most importantly, correctly attired (nothing bugs me more than when they’ve obviously rented lesser quality costumes for the extras, because trust me, I’m watching!). Those that stood out to me included: the fox costume was such a great reproduction of a redingote. Of course I ADORED the striped gown in its floofy stripeyness (plus cute parasol!) although I will point out that it was shantung or dupioni – but who cares for such great stripes! The drunken gown was such a fabulous color combo and the hair was just perfect. The white/blue striped gown had such wonderful seaming and stripe placement in the back, plus I loved the ruffle on the skirt. If the flowered dress isn’t a Duran (repro 18th c.) I’ll be shocked as the print is just spot on, and I’m pretty sure that’s a repro of a gown that’s in What Clothes Reveal. The list could go on, but those are my highlights. So don’t listen to the naysayers and go see it if you like accurate 18th century costumes and/or tragic period drama!