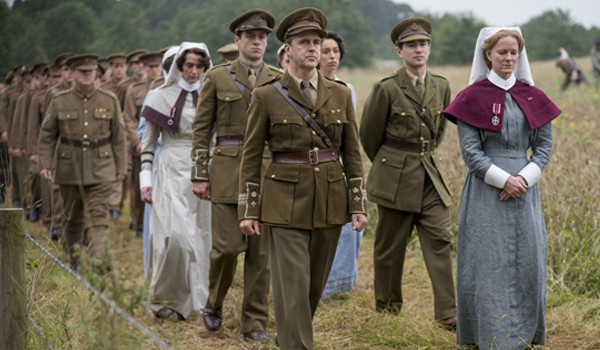 Set in 1915 at an English field hospital, The Crimson Field is part of the BBC’s productions honoring World War I. The six-episode series aired in the UK in 2014 and started showing on PBS for American audiences in 2015. There are no plans to create a second season, so any cliffhangers will remain unresolved.

I’ve watched the first few eps and found it to be jolly good fun in a mix of Downton Abbey‘s second season (when they go to war) and MASH (the 1970s sitcom set in a Korean War field hospital). It should be noted that I’ve kept up with all of Downton, but more importantly, I’m a HUGE fan of MAS*H and can quote entire episodes and wanted to grow up to be Hawkeye Pierce. So The Crimson Field pushes the right buttons for me with the setting and overall story, just adding a bunch of super soap-opera storylines.

Oh yes, soapy it is. This is not a Serious War Drama. No Saving Private Ryan or Band of Brothers. It’s also, refreshingly, not about just the men at war. The Crimson Field focuses on three Voluntary Aid Detachment nursing volunteers (called VADs), the regular nursing staff, their lives and loves, and how they deal with complications facing women in the Edwardian era. The war is a backdrop to add a touch of fission, but the real drama is interpersonal. If you’re into that, this show will be fascinating and fun to watch.

Like Downton Abbey, it has women joining the war effort for diverse reasons — think of Lady Sybil and Lady Edith with their varied levels of participation and motivations. Also, it has Mr. Molesley from Downton as the hospital’s sympathetic colonel, and the Dowager Countess’ butler Spratt as a sneaky supply sergeant.  Like MASH, this show has surgeons trying to get it on with nurses (OK, with the VADs because the full-time nurses are basically nuns). Also like MASH, there is a certain level of bucking authority in the name of providing better care for the patients. 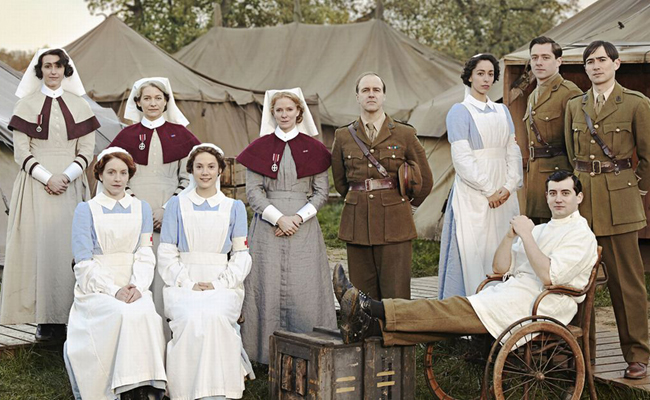 The Debate Over Historical Accuracy in The Crimson Field

Admittedly, I don’t know how historically accurate any of this is. In researching the show, I learned that the series creator Sarah Phelps was inspired by reading The Roses of No Man’s Land by Lyn MacDonald, a British military historian who wrote extensively on nursing (both by sisters and volunteers) in World War I. Phelps used that and other period material to inform her writing of The Crimson Field.  In addition, Christine Hallett, a University of Manchester Professor of Nursing History, who wrote the book Containing Trauma: Nursing Work in the First World War, was consulted by the series and served as a historical adviser. The professor read scripts and briefed actors on period nursing techniques. The British Red Cross even promoted the series on its website and noted that the show used an original 1910s pattern from the Red Cross archives to sew pajamas for the hospital patients on screen.

But then I found that in World War I enthusiast forums and blogs, self-styled experts were ripping The Crimson Field apart. Whoa, they made our Snark Week look like a genteel tea party. I read through a dozen pages of one forum, and while it was hard to pick through the general complaints of ‘it’s a soap opera!,’ the historical inaccuracy crimes mainly seemed to be that the TV series called the setting a field hospital when it should technically have been called a Casualty Clearing Station; VADs didn’t specifically serve at Casualty Clearing Stations (over 300 did serve abroad, according to the British Red Cross and several memoirs, btw); that this hospital/station was in an indeterminate seaside geographical location ‘close to the front lines,’ which clearing stations wouldn’t have been; the nurses’ capelets weren’t the right shade of scarlet; the colonel’s shoes had the wrong type of sole; and a vehicle had a license plate in a format more modern than 1915. Quelle horror!

Many of the commenters made snide comparisons to shows like Call the Midwife and Holby City (a modern BBC medical drama; think ER or  Grey’s Anatomy in the U.S.). The implication appeared to be that The Crimson Field was lowbrow pop TV for the uneducated. I find this snobbery ridiculous, not to mention it smacks of British class-ism. Little do they realize that, here in the states, when historical drama is on PBS, and especially if it has a British accent, that means it’s an elitist affectation, HAH.

Y’know Frock Flicks was founded to rip into bad costumes in period dramas, but if there’s anything I’ve learned after watching the hundreds of movies and TV shows I’ve seen doing this podcast and blog is that you pick your battles. Some things are far worse than others when it comes to “bad costumes” or even “bad history.” No historical costume flick is going to be 100% accurate — it’s simply impossible, for a host of reasons. Some will be more historically accurate than others, depending on budget and the purpose it was made.

While we can all be hypocritical about what we nitpick for accuracy and what we give a pass to, in general, I find things to be more offensive if they actually look ugly when they shouldn’t (like shiny cheap satins, aka the poly baroques we mock, see: Valmont) or they distract from the story (such as clompy Keira Knightley in anything historical) or it’s willfully wildly wrong (OK, yes, Reign, but I’m the one who has fun watching it for the soap opera aspect too).

So really, the critiques of The Crimson Field sound awfully petty to me. The series does a nice job of showing women’s roles in World War I, something that few people know about or probably ever considered before this. It’s a remarkably female-focused war drama, which is incredibly rare, no matter what period (the only other one I can think of that actually took place in a war theater was China Beach (1988-1991), set in Vietnam). My beloved MAS*H only had Major Margaret Houlihan and a revolving cast of essentially nameless nurses (there was literally a Nurse Abel and Nurse Baker — see? Nurse A and Nurse B — who were played by different actresses over the series run).

In The Crimson Field, Kitty, Rosalind, Flora, Sister Joan, Matron Grace, and Sister Margaret are unique women with complicated backgrounds. They experience conflict, joy, romance, and heartbreak throughout the show. It’s a mix of a war drama, a workplace drama, and a soap opera, with women as the main characters. Some people rather like that sort of thing.

Costumes in The Crimson Field

But how about those costumes? Well, the British Red Cross has a PDF titled “Nursing During the First World War,” which describes the VAD uniforms of 1915 in detail. They were to wear a blue dress that was long (“from throat to ankle”), full, and buttoned down the front, with a white collar. VADs had to wear a starched “Sister Dora” cap, which is essentially what we’d recognize as a nurse’s cap. The only accessories they were allowed included white linen over-sleeves, a white linen belt, and a white apron with the Red Cross emblem on the apron’s bib. The ensemble was to be worn with black boots and black stockings. 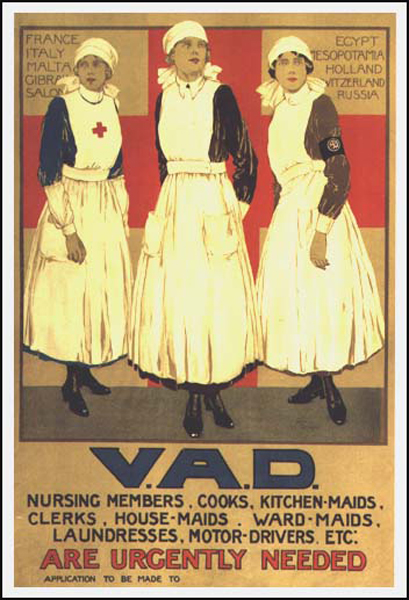 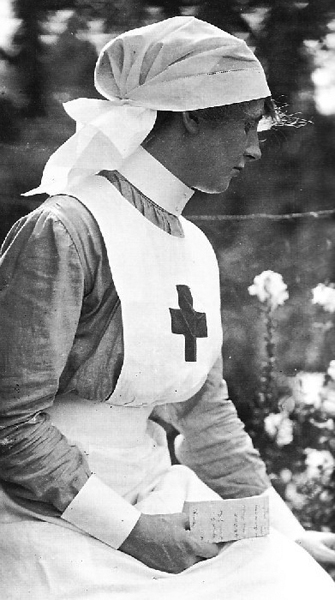 Photo of an unnamed 1910s VAD. Note her softer style of cap. 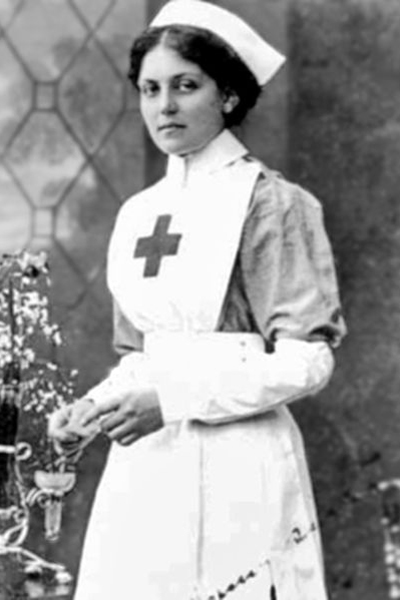 The one big change I can see in The Crimson Field is that the VADs don’t have the Red Cross on their aprons — it’s on an armband. I’ll bet that was a design choice, since a red emblem on three main characters’ chests would direct the eye’s attention to only that on screen. And at least one 1909 poster seems to show the cross placement as varied (perhaps because the “uniform” got more regulated as the war dragged on). If you’re going to quibble, fine there’s something to nitpick.

Otherwise, they’re wearing period garb, down to the corsets (according to the actor’s interviews; though I’d have appreciated showing them in corsets instead of just chemises in the several “girl talk” scenes in their tents — not to mention when Kitty takes a dip in the ocean, her pile of clothes on the beach is missing any trace of corsetry, or shoes for that matter, so maybe that wasn’t all her clothes?). 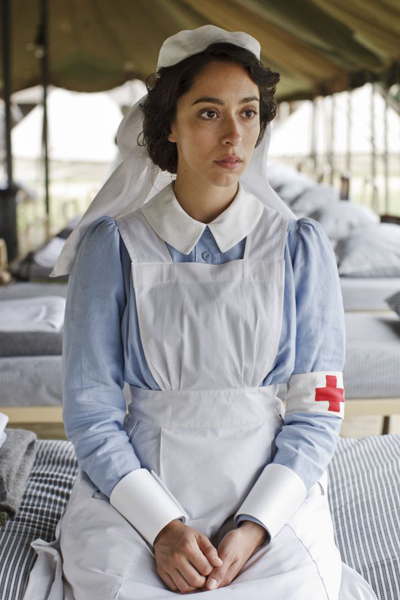 Kitty — No red cross on the apron. Also the collar isn’t a pinned-in starched collar, if we’re going to snark (yet the cuffs are starchy, hmm…). 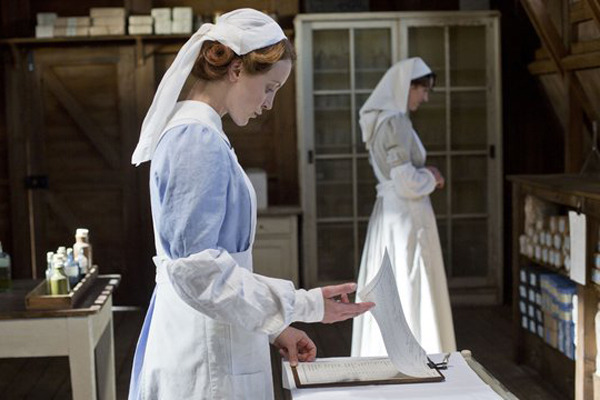 Rosalie (with a nurse sister in the background) — side-view of the caps makes them look like the 1910s version. 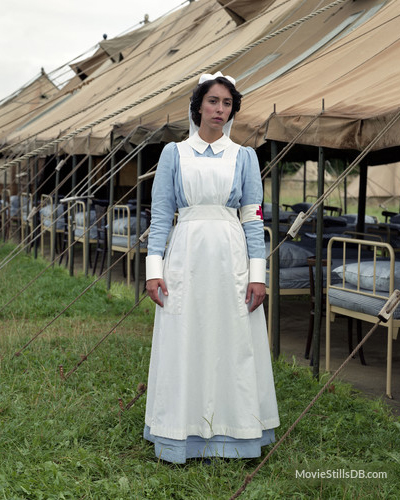 That’s the VADs’ uniforms. Let’s take a quick look at the professional nurses, or sisters’, uniforms. I couldn’t find descriptions, but some photos exist, particularly on the Queen Alexandra’s Royal Army Nursing Corps website, which also cites the book The Roses of No Man’s Land by Lyn MacDonald. In comparison, The Crimson Field costumes look pretty accurate here. 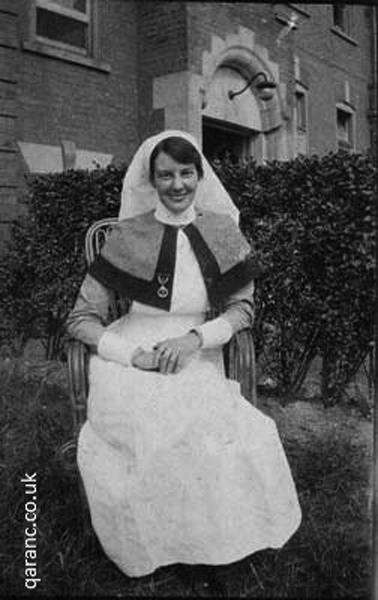 Photo of an unnamed 1910s nurse, from the QARANC website. 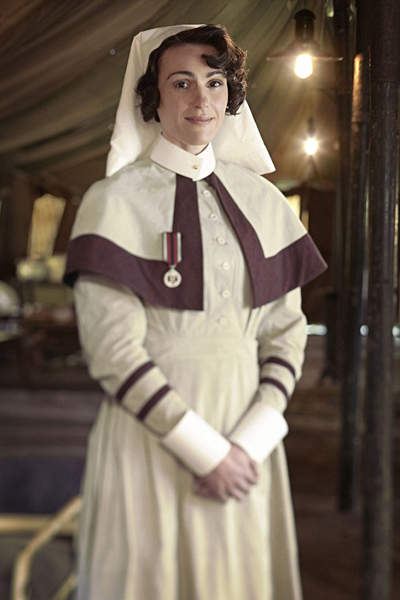 The only thing that I thought looked odd was how clean and well-pressed all the clothes looked for wartime anywhere in the fighting theater. The surgeons’ trousers are sharply creased, and the nurses’ white aprons and caps are optically white. MAS*H sure was a lot dustier (and bloodier). Though reading the British Red Cross info about the VAD uniforms, it does seem to indicate that keeping an ultra-clean and crisp appearance was stressed to all the women. Still I wonder how much that actually happened in practicality.

So, is The Crimson Field perfectly historically accurate? Duh, of course not. Is it worthy of snark? Not in my opinion. It’s not playing fast and loose with history a la The Tudors. The series shows a little known side of history with a splash of soap opera storytelling. And can we stop using “soap opera” like it’s a bad thing? Because doing so has strongly sexist and classist overtones. The same story tropes in soap operas are in Shakespeare too, and not all of Shakespeare’s words are magnificent poetry (hey nonny nonny, come on!). I’m glad to have discovered the world of VADs through The Crimson Field, and I’m bummed there won’t be a series two. How about you?