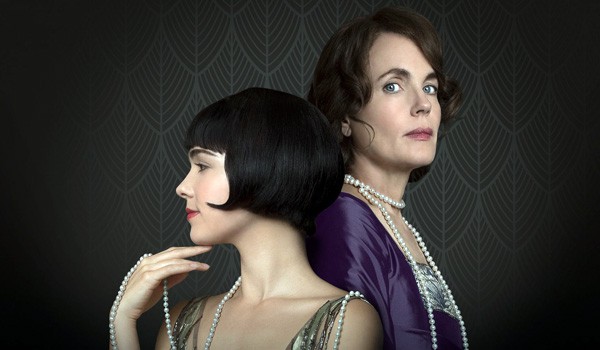 Elizabeth McGovern stretches out of her typecasting as Cora, Countess of Grantham, and returns to somewhat more complicated roles as the central character in The Chaperone (2019). She’s a naive Kansas wife, Norma, who volunteers to accompany 16-year-old Louise Brooks to attend dance school in New York City. While Brooks is later to become a silent-film star and we know her story, Norma’s complicated past and secret-filled present drive the action here.

The Chaperone had a brief theatrical release in March 2019, then was made available on PBS Passport online, and finally aired on PBS Masterpiece in November 2019. The movie feels more like a TV movie than made for the big screen, so nothing is lost by watching it streaming. Set mostly in 1922, the period details are beautiful and fairly accurate, although some of the press indicates that the movie was made on a tight budget.

Speaking of accuracy, the story comes from a historical fiction novel by Laura Moriarty (Julian Fellowes adapted the screenplay). McGovern’s character is wholly invented. There are some elements of truth — Louise Brooks was from Kansas and was sexually molested as a girl. She was a dancer and attended the Denishawn School of Dancing modern dance company in 1922, when she was 15. However, the school was in Los Angeles, not New York City (Denishawn later opened a branch in the Bronx, NY, in 1927, not that Brooks attended), so the central premise of this movie is false. Still, the book’s story makes for an entertaining frock flick.

And goshdarnit, this is a pretty little movie! Apparently, costume designer Candice Donnelly (who has mostly worked in theater) hardly built any full costumes specifically for this production, due to time and budget limitations. In Beyond Fashion Magazine, she said:

“Usually [when shooting a film] you have months and months. We only had three weeks to shoot the movie and pre-production was three before that. The whole process was about two months.”

As a result, Donnelly “ended up buying a lot of vintage clothes on [online]. I also borrowed something from England.” This is stunning when you see how lovely the show looks and how well the clothes evoke the period. She must have some mad shopping skillz! Plus, she knew what she was looking for and what she was trying to achieve. In Times Square Chronicles, Donnelly said:

“I love doing the research. I love fabrics and trying to re-create the way they moved. I found myself digging up and looking at old photographs. What was beautiful then is different from now. How women look and their decorum was based on their clothes.”

I’m not an expert in 1920s fashion, but in my cursory perusal of catalogs and photos, oh yeah, she nailed it here. Moreover, the costumes reflect the characters and in subtle ways that don’t hit you over the head. OK, maybe with one exception, which I’ll explain. Though I’ll keep most of the plot points secret because I enjoyed how they rolled out in the movie, just watch it for yourself! 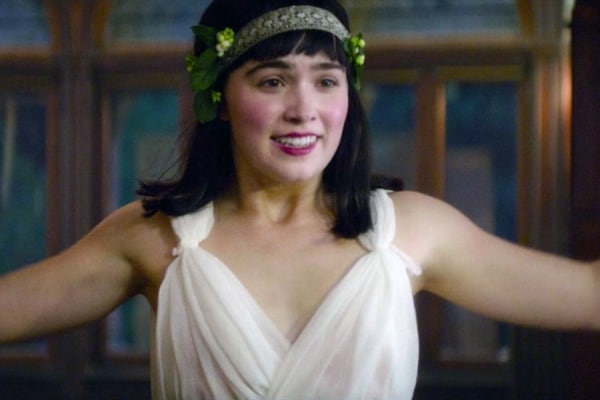 We first everyone at Louise’s dance recital in Kansas. 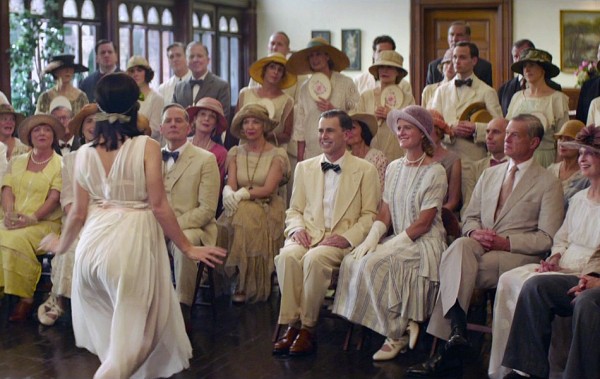 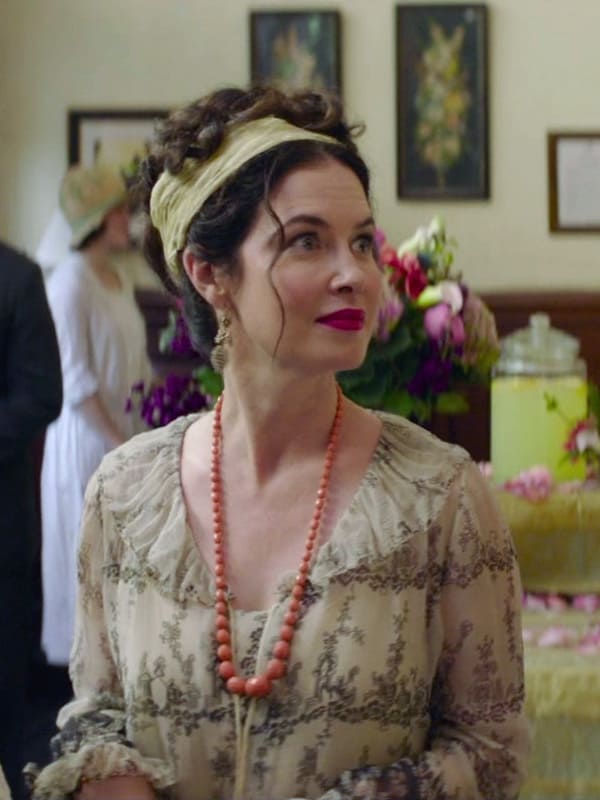 Myra Brooks, Louise’s mom, is a little artsy / unconventional in her fashion, compared to the rest of Wichita. It’s true that Myra was a classical pianist, & Louise was raised in an arts-filled home due to her mother. 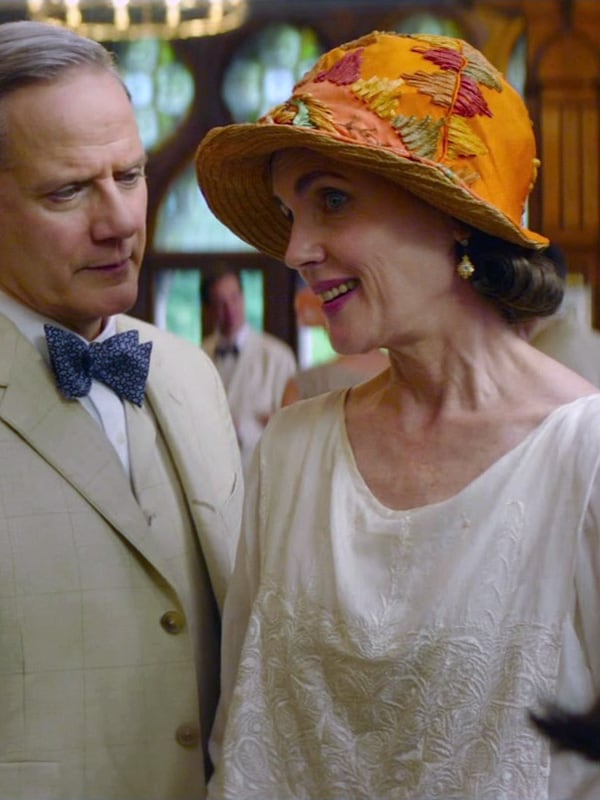 We first see Norma wearing a simple dress & very pretty hat (which she’ll wear many times throughout the film). 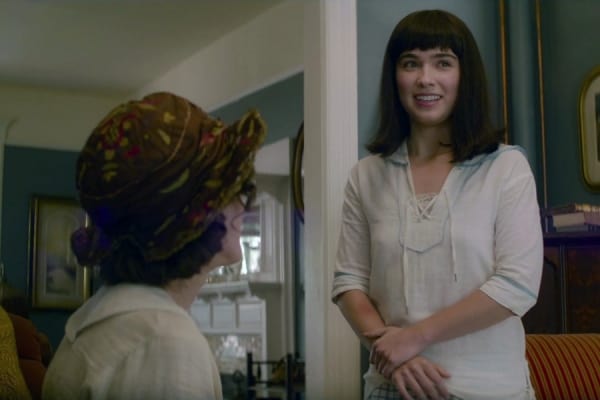 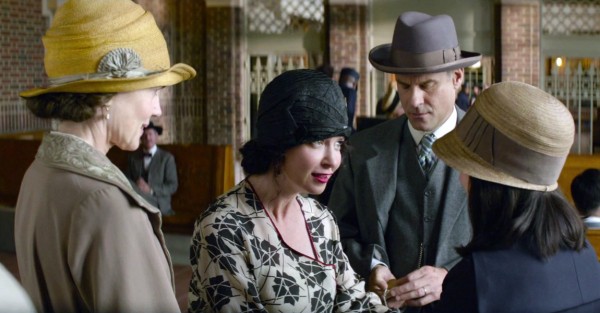 Good proper hats on everyone as Norma & Louise leave the Kansas train station. 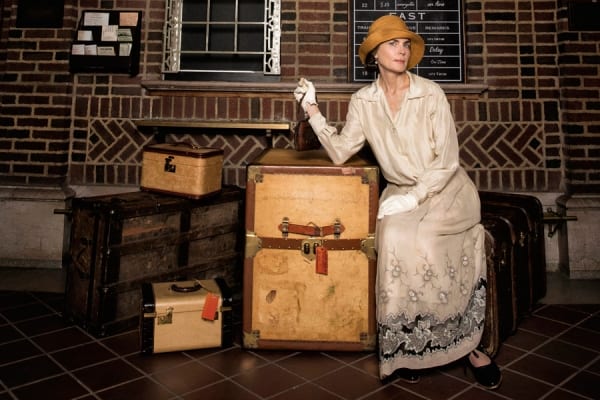 This promo shot (by Karin Catt, courtesy of PBS Distribution) shows lovely details on Elizabeth McGovern’s skirt that I totally missed in the film. 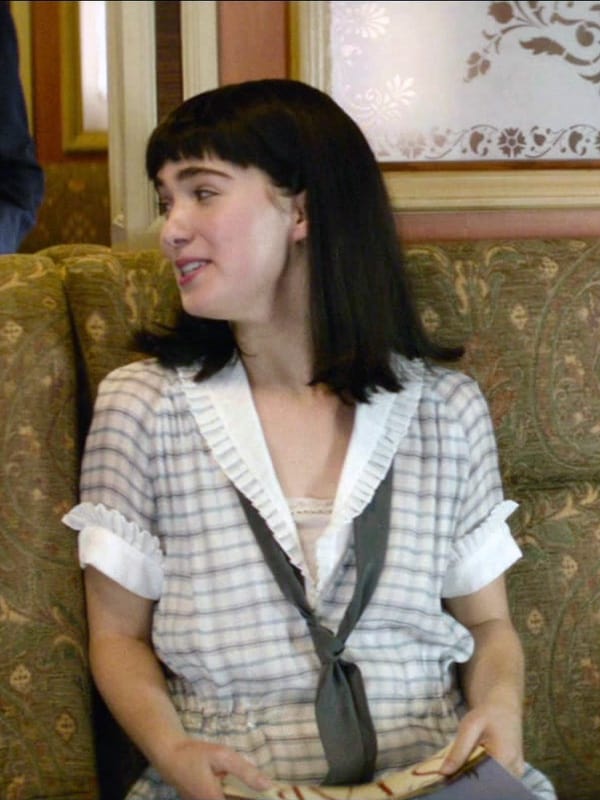 On the train, this is the last of Louise’s sporty casualwear. She’ll start dressing more grown-up in NYC. 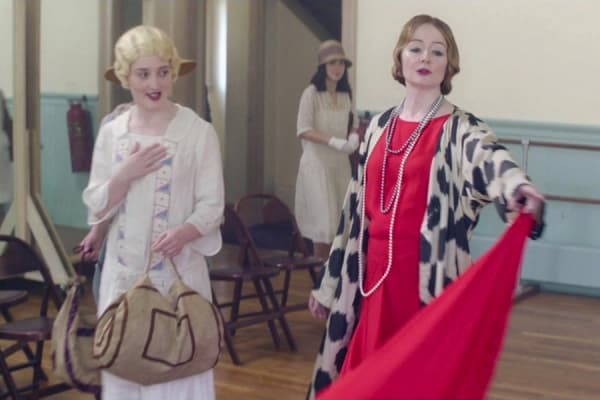 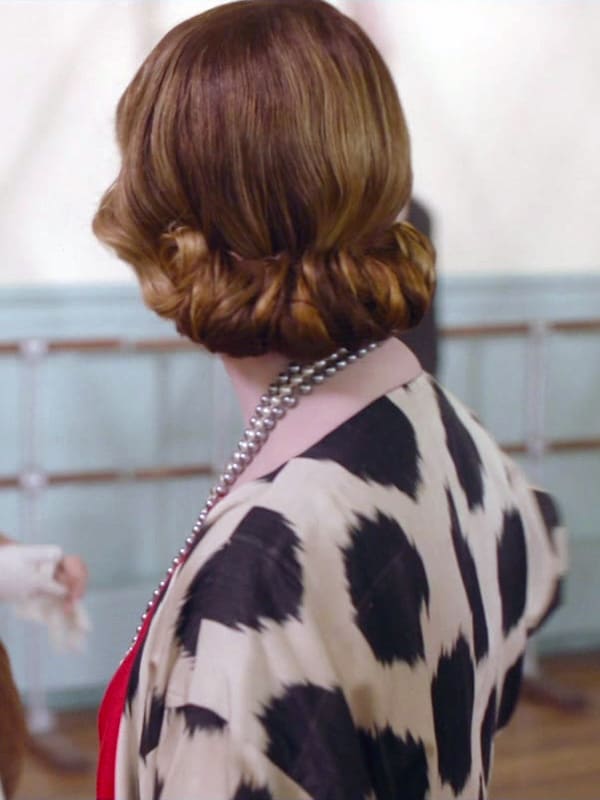 St. Dennis may be fashion-forward, but she hasn’t bobbed her hair. 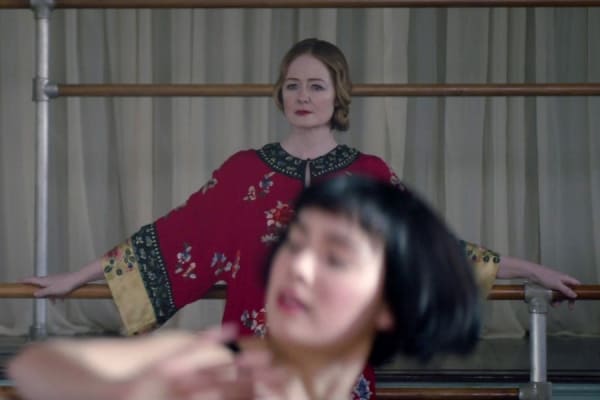 She does wear an exotic oriental coat though. 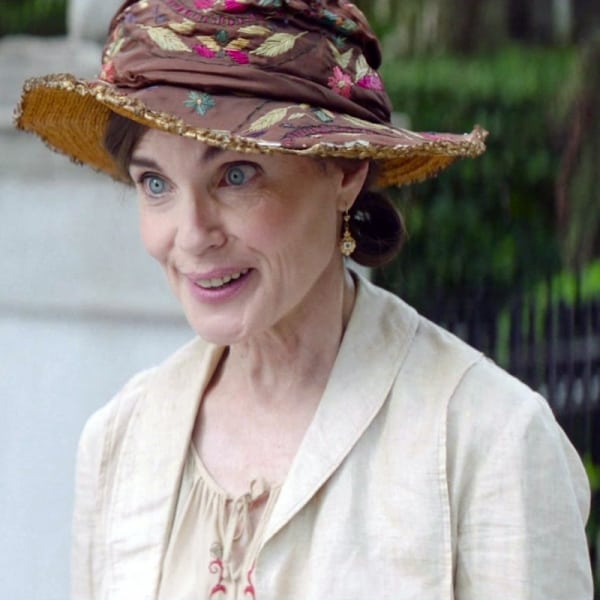 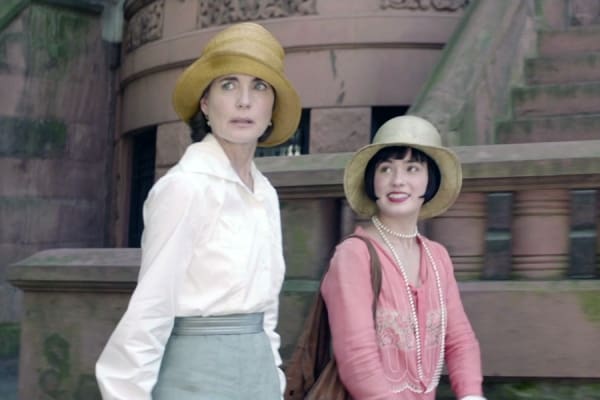 You can see the contrast here — Norma still has a ’10s waistline while Louise has a ’20s dropped waist. But their hats are very similar. 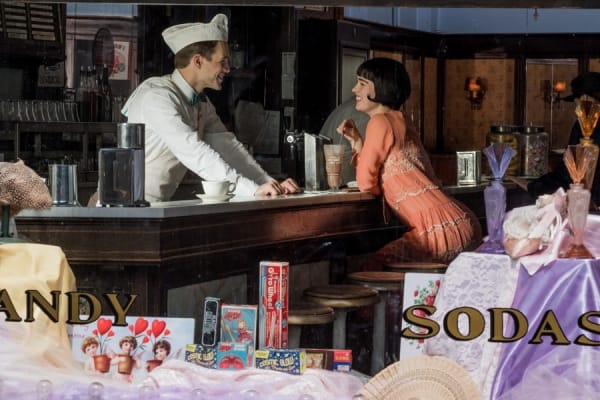 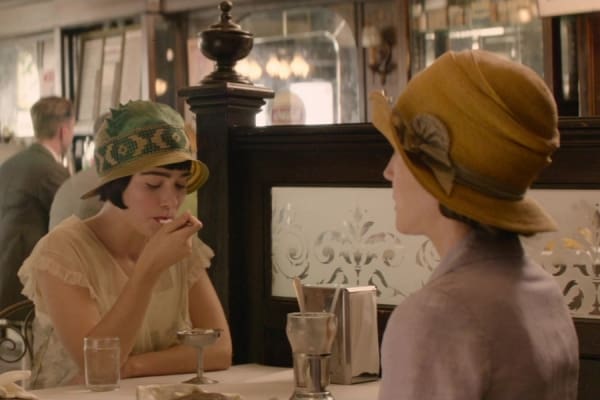 I wonder if that’s vintage trim on the hats, especially Louise’s green ribbons? 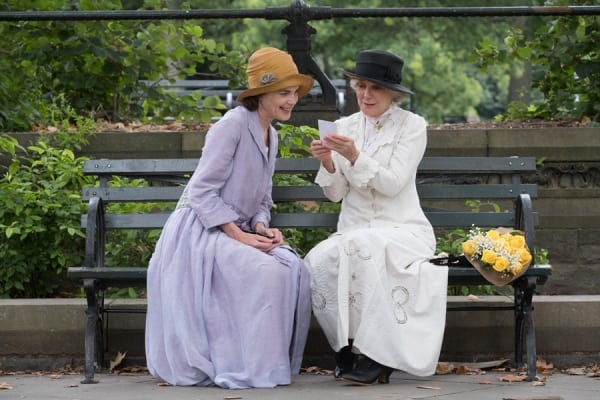 Norma meets someone from her past. Her lavender dress has a slightly lower waist & looser shape. Photo by Barry Wetcher, courtesy of PBS Distribution. 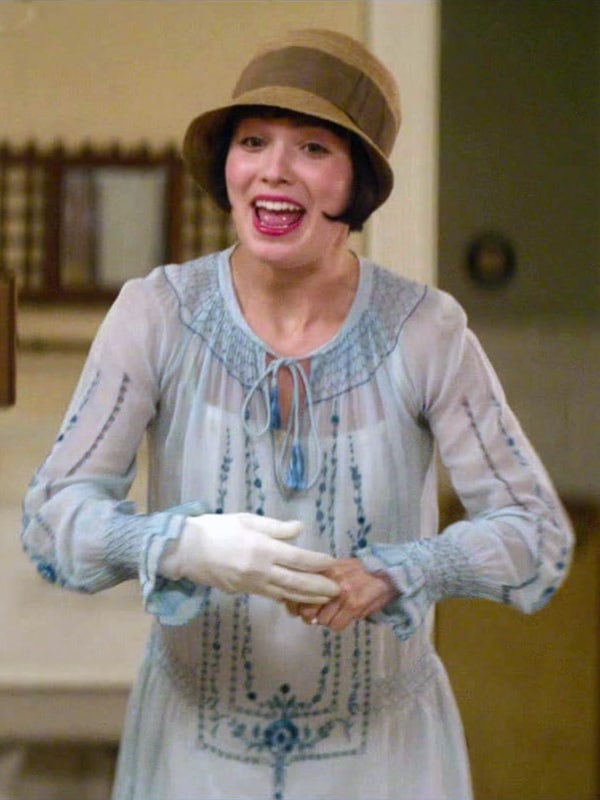 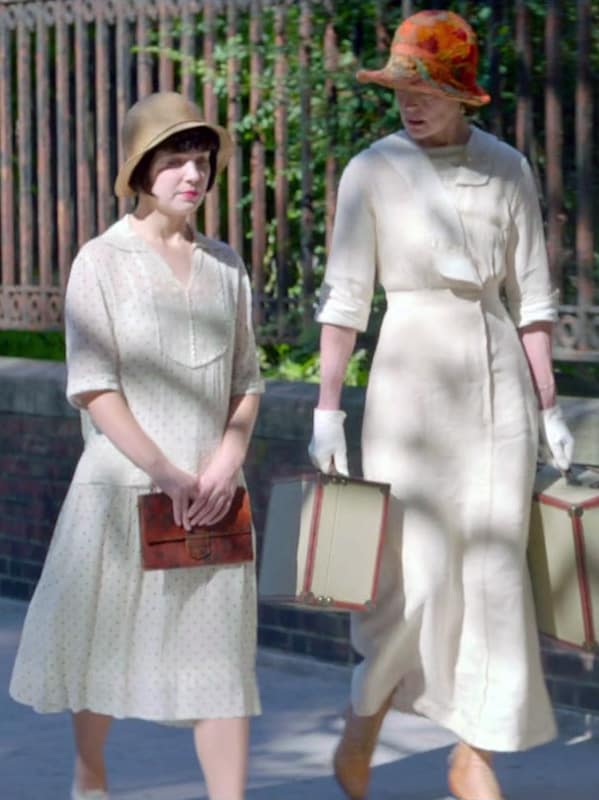 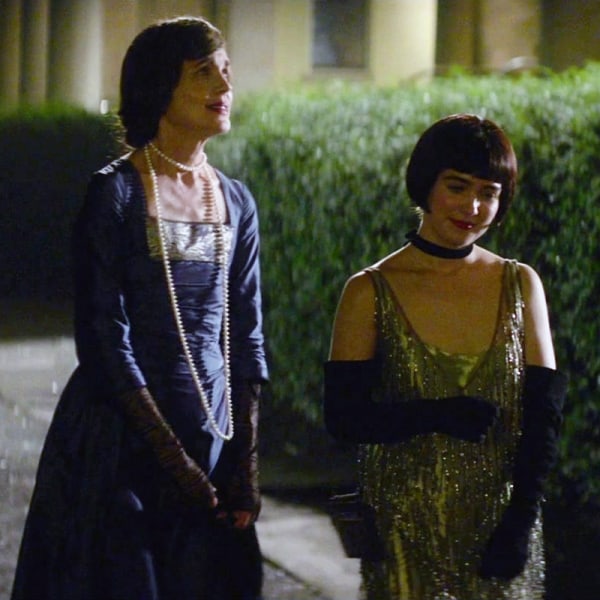 They go out to the theater in evening dress. I lightened the screencap, & Norma’s gown looks like it uses sari material. 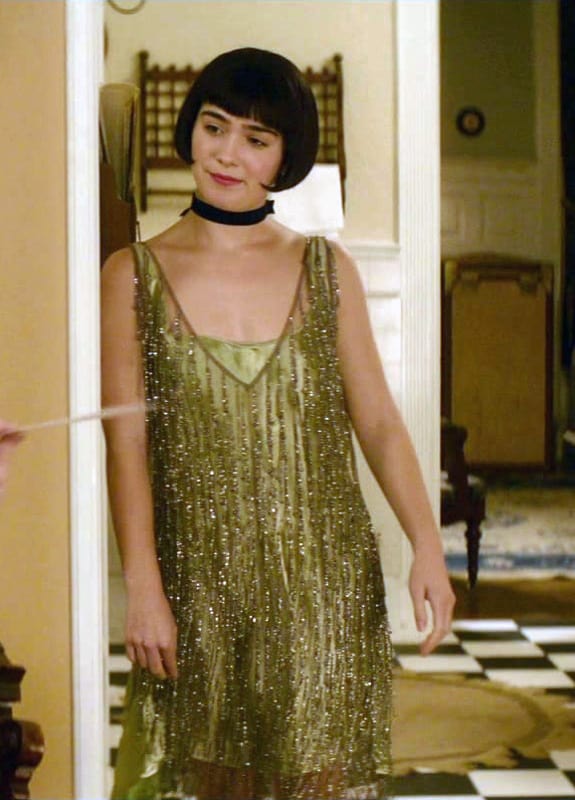 Not quite the typical ’20s fringe cliche. 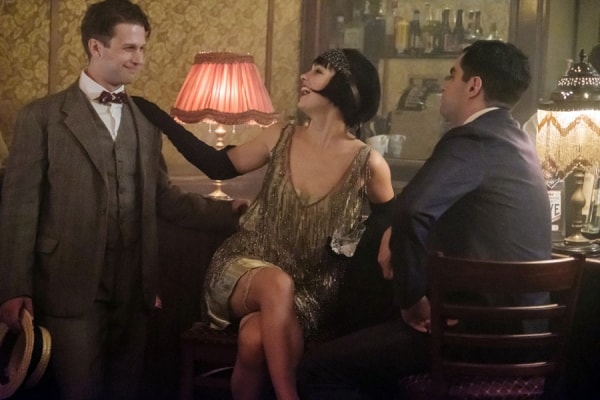 Hint of a garter belt there on Louise. Photo by Barry Wetcher, courtesy of PBS Distribution. 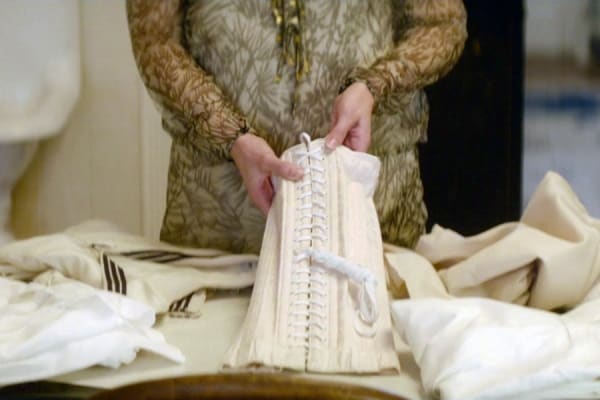 Several times throughout the story, Norma complains about her corset, until, at the end, she ditches it. Sure, it’s a metaphor for her loosening up emotionally & mentally. Fine. Whatever. And yes, the 1920s were when fashions changed from the Edwardian corsetry. It’s not done as clunkily as *some* frock flicks have, but I’m still not sure if I’m OK with this generally over-used trope.

Have you seen The Chaperone? Did you read the book?