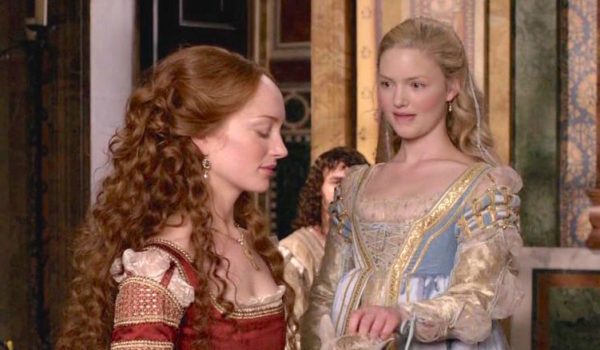 The Borgias ran on Showtime from 2011-13, and while it wasn’t always perfect, DAMN if they didn’t do an amazing job with the visuals. Set in the 1490s, the show centers around Pope Alexander VI, his three adult children (Cesare, Lucrezia, and Juan), and his mistresses (Vanozza and Giulia). We podcasted about the first three episodes way back when, and compared it to its competition later in the series. And while I sometimes laughed at Juan’s mullets, thought Cesare was un-hot (sorry! Something about his rabbit upper lip), and felt that the plot was a little heavy-handed, I ALWAYS adored the costume design and, in particular, the women’s hair.

I’ve come back to images from the show repeatedly for ideas for 15th/16th century hairstyles, and thus was inspired to share my Borgias hair lust with y’all. Now, I can get a little OCD about this kind of thing, so I thought I’d better split things up into the three seasons (although I am having a hard time finding screencaps for season 3 — anyone have a source?).

Interestingly, while the women’s hairstyles change over the course of the series, it’s less done by character-growth and more of an allover change that affects all the female characters. I’m not sure if they were trying to show fashion change, or if different hair designers decided to go in different directions.

“The art is ‘to make “period” fresh,’ says Stefano Ceccarelli of ‘The Borgias.’ ‘You can’t go too severe. Sometimes you have to compromise because the hairstyle has to go with the actor’s face.

“‘But you must always think of how what you do will be perceived by the audience. The challenge is a fresh look that could be accepted, making the audience believe that it’s true.’

Now, let’s look at the main female characters in season 1, and compare their hair to historical sources of the period. If there’s one thing I’ve learned from studying Italian fashion of the 16th century, it’s that there’s tons of variation depending on what city/city-state you’re in, and I’m guessing that holds true for the late 15th century as well. I’m not going to get all “here’s what was worn in Rome, here’s what was worn in Milan” because I’ve got a life to live, but do note that the historical images I’m pulling are those that seem similar and you may know more than me (if so, weigh in!).

Lucrezia Borgia in The Borgias

Season 1 shows Lucrezia (Holliday Grainger) develop from the sweet young miss who is the apple of her family’s eye, wearing decorative caps that are luckily too pretty to be unfortunate bigginses with her hair up in front and down in back, to married and oh so jaded, with hair in various beaded nets (symbolizing her captivity? Probably not, since all the other ladies wear them too). 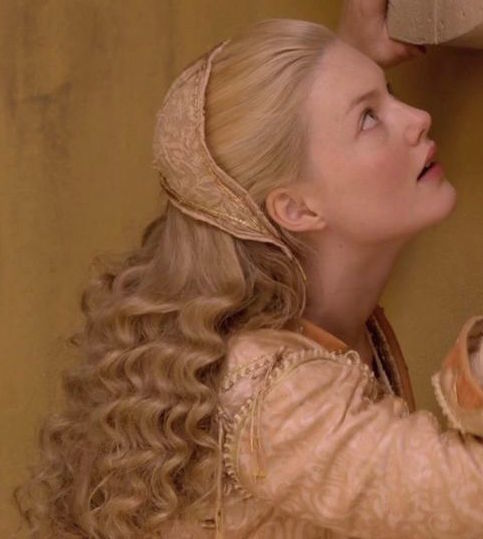 A sweet pink brocade cap to match her gown. 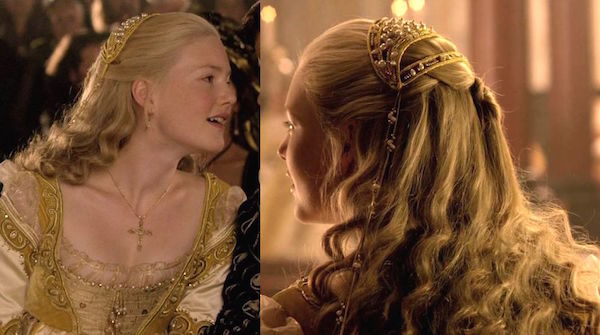 At a formal evening event, her caps morphs into more of a decorative bit.

This cap is very much improved by the hanging multi-colored ribbons, ostensibly to tie it under the chin but clearly there for decorative purposes. 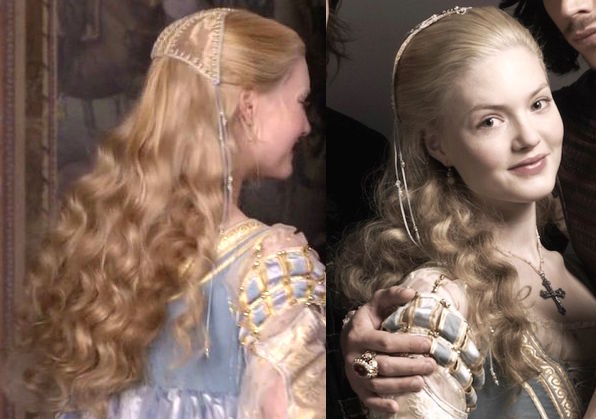 A satin cap that matches the fabric in her gown’s sleeve. Note the beading on the “ties.”

Do you see back-hair-down styles like this in the period? Yeah, but more so on images that are probably allegorical or religious, like this one of Mary Magdalene (anyone biblical is probably painted to look ye-oldey-timey): 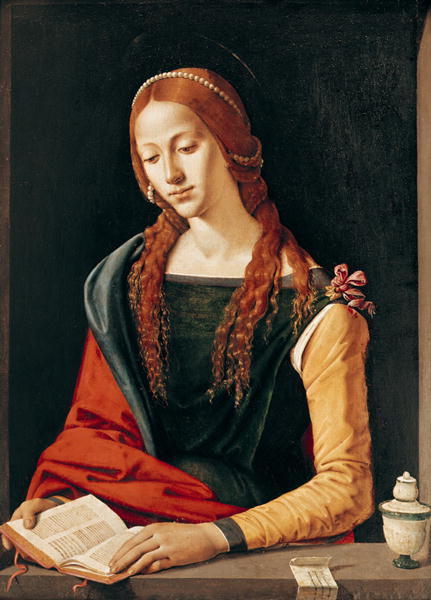 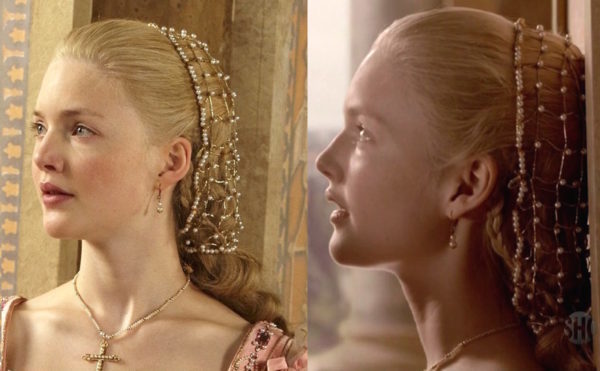 A rare, pre-marriage “grown up” style. Her hair is still down and perfectly waved in back, but it’s caught in a pearl and bead net.

You absolutely see beaded nets like this in the period: 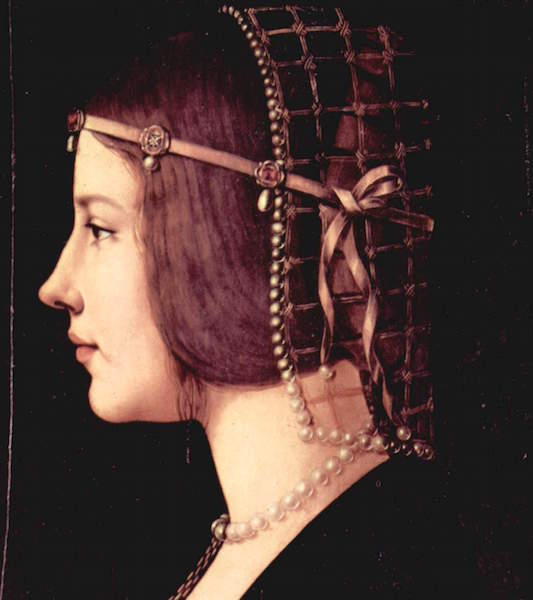 At her first wedding, Lucrezia’s hair gets way more complex: still up in front, down in back and waved, but now we’ve got: tiny braids behind the ears, a twist coming down from the front hair, and the back hair is caught with a beaded band. She wears a veil for the ceremony (left), which then comes off for the reception, but keeps the jeweled bands across the crown of the head throughout. 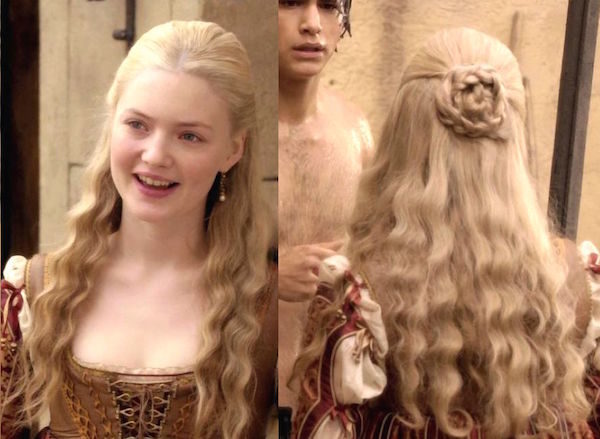 Soon after her marriage, despite her growing disillusion, she spends some time in her demure-young-maiden style…

But as she becomes more jaded (and more hot for her servant), she embraces the beaded nets. Here her hair is in a long, low twist, covered with a brown and pearl beaded net, and then topped with a flat cap. She wears this same style multiple times at the end of the season, although usually without the flat cap.

Back to these beaded nets, this kind of style, where the hair isn’t just hanging down in back, seems much more akin to what was done in the period: 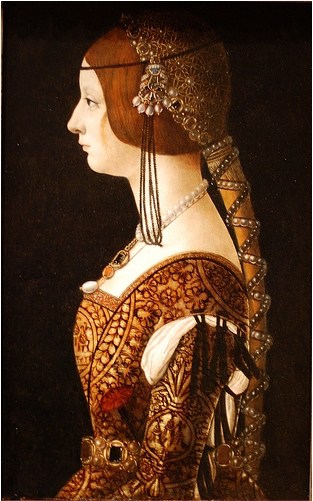 Another all-growed-up style — on the left, all the hair is in a burgundy/pearl beaded long caul for making out with servants, and on the right she’s pulled out one strand of wave for talking to her brother.

Here’s what I think is a long caul, although obviously not netted: 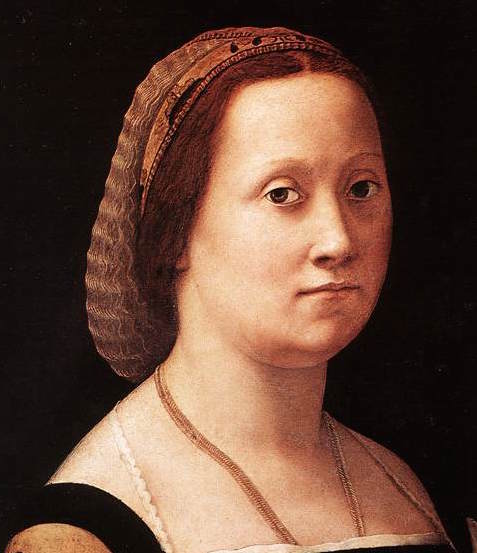 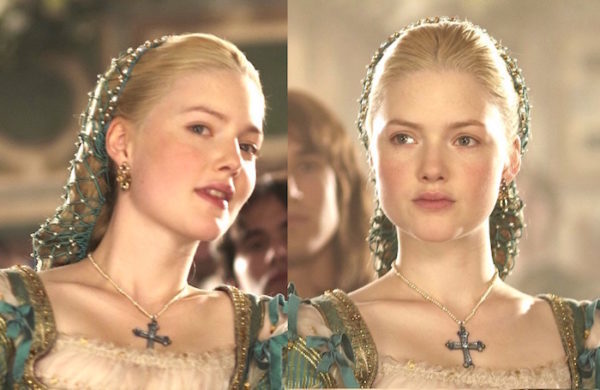 At a formal Vatican event, all (or most?) of her hair is caught by this green/pearl net.

Giulia Farnese in The Borgias

Giulia (Lotte Verbeek) is the new, fashionable, and beautiful mistress of Rodrigo Borgia/Pope Alexander VI, replacing his longtime mistress and mother of his children Vanozza (below). She’s the cultured, cosmopolitan, grown-up counterpoint to Lucrezia, and you just know I adore her in her redheaded glory. 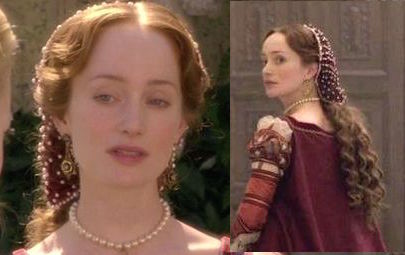 Giulia’s hair is center-parted, waved, and caught back in a burgundy and pearl net.

Here’s another example of a decorative net: 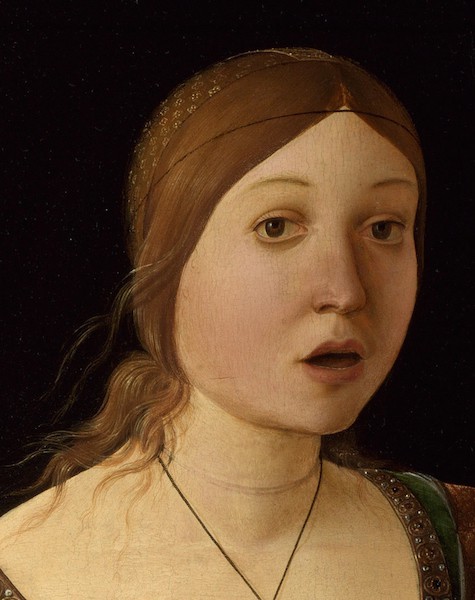 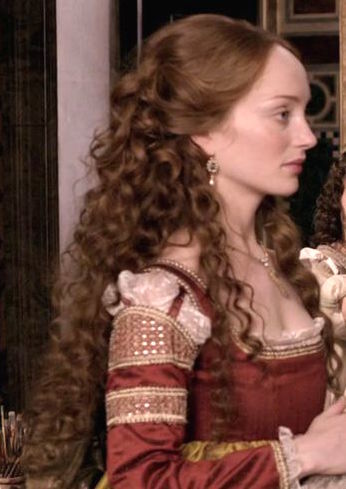 When she has her portrait painted, Giulia loses the net and just goes full Renaissance-maiden.

Giulia is holding a goat for her portrait, and it seems they were trying to reference the famous Young Woman with a Unicorn painting… but they clearly went a different direction with the hair: 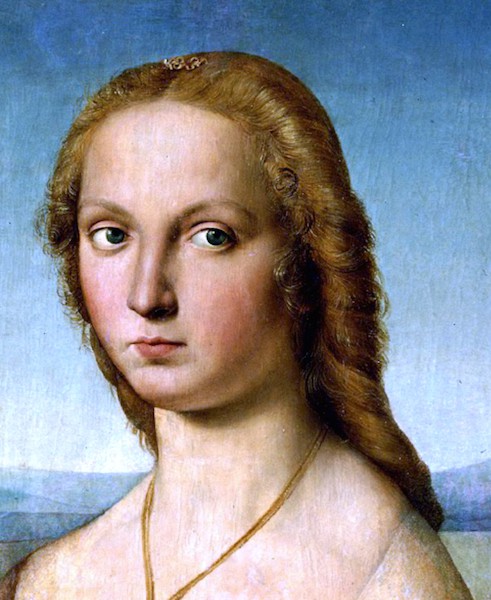 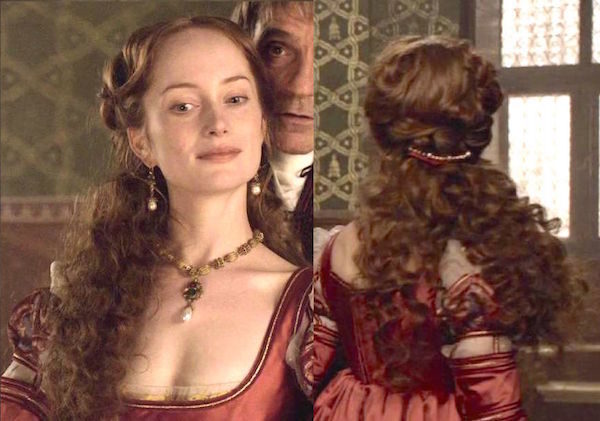 This may be what her hair is doing under those nets, but here she’s accented it with a simple pearled band.

Now the hair is up in a full, long caul. I love how they placed this caul so far back on her head!

Another pretty beaded net effect, but this time with extra waves around the face and a ferronière (the headband across the forehead).

The term “ferronière” is obviously French, I’m not sure what the Italian term was! The French term is tied to this famous painting by da Vinci: 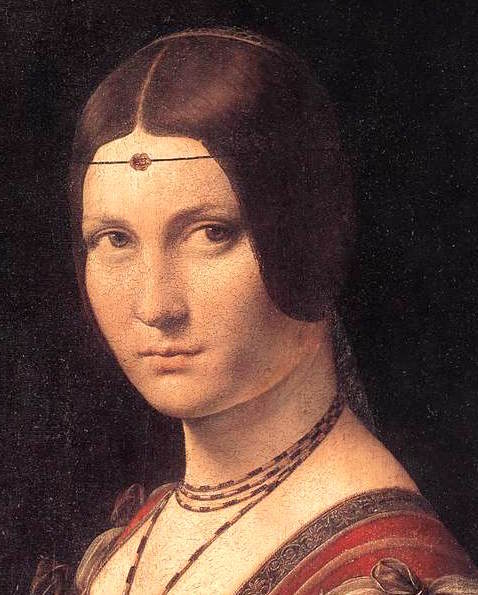 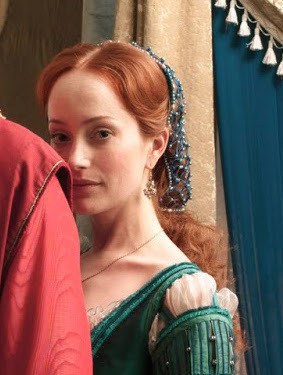 The beaded nets seem to always coordinate with the gown.

She wears her hair up in this caul for traveling (to see/visit Lucrezia, and deal with the French king).

Vanozza Cattaneo in The Borgias

Vanozza (Joanne Whalley) has nice but comparatively boring hair for season 1, which accounts (in my opinion) for Rodrigo ditching her. If she’d only rocked the hairstyles she did in later seasons, maybe he wouldn’t have wandered off! (Just kidding. He was clearly not one for commitment). 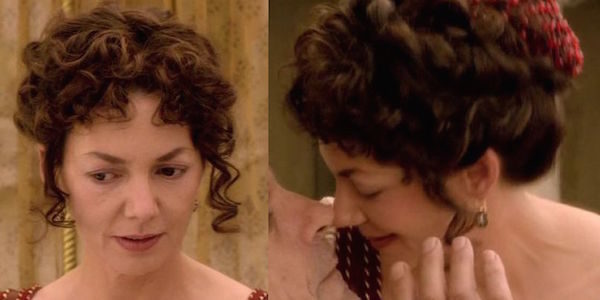 Vanozza spends most of season 1 with short tousled curls on top, and the hair up. Here you can see it’s twisted and there’s a small red beaded net in back. 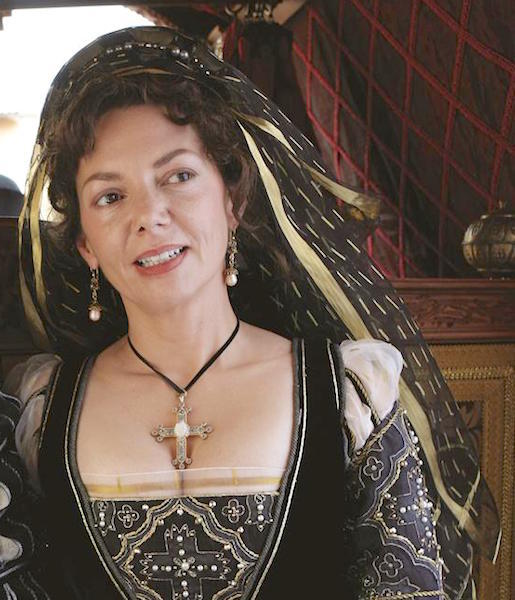 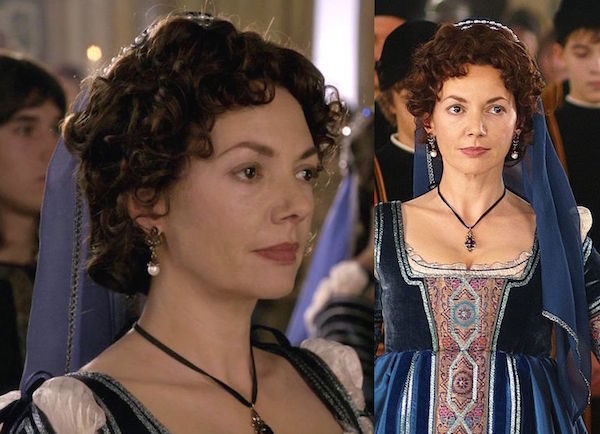 Same tousled curls, yet another veil.

You certainly see veils in the period: 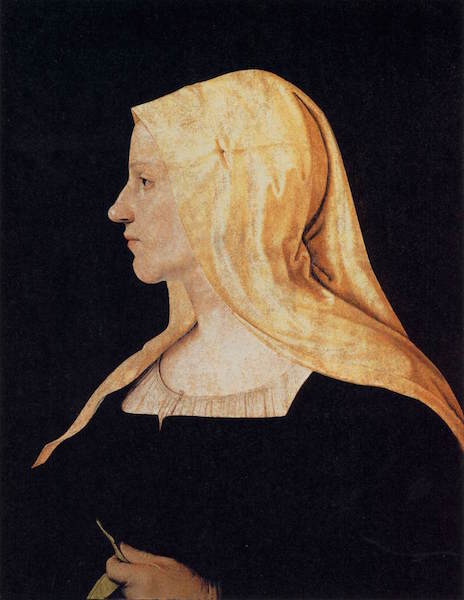 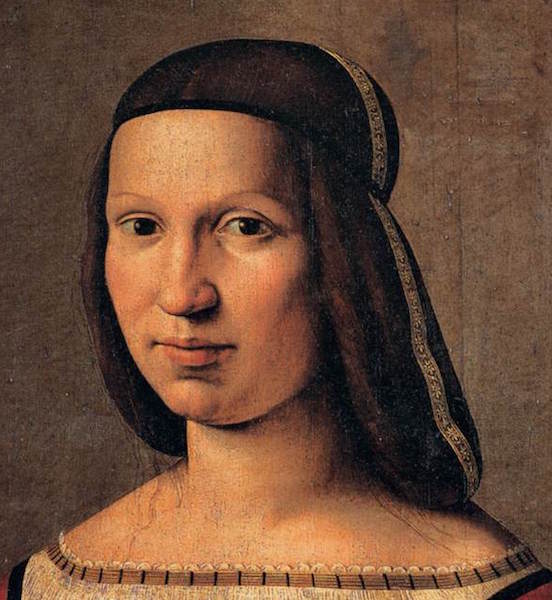 Ridolfo Ghirlandaio, detail from Portrait of a Woman, 1508, Pitti Palace.

Caterina Sforza in The Borgias

Caterina (Gina McKee) is a smaller player in season 1, and both times we see her she’s wearing her hair up in a braided coronet that’s interwoven with burgundy velvet ribbon and accented with pearls. 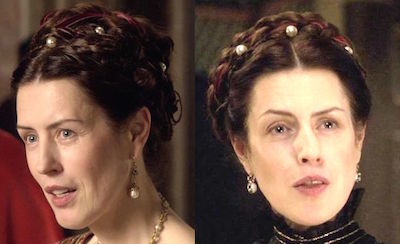 Caterina’s hair is lovely, but wait for season 2…

Other Female Characters’ Hair in The Borgias

Cesare’s blonde mistress has SUCH an Italian Renaissance look! Before hitting the convent (and, presumably, shaving her head), she’s in waves with a long twist down, covered with yet another beaded/pearled net.

Again, let’s compare with a beaded net from a period source: 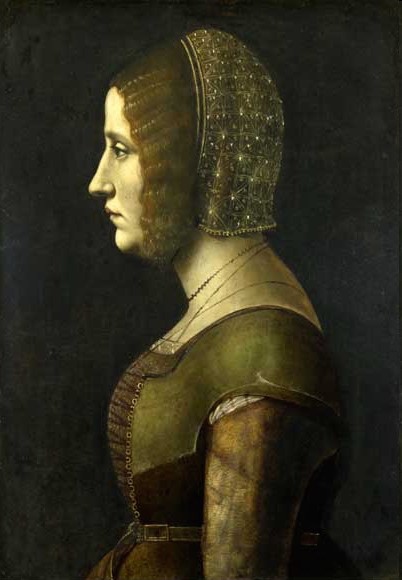 Giovanni Ambrogio de Predis, Portrait of a Lady, 1500, National Gallery. I’m pretty sure she has a long braid or twist hanging down her back, but it’s hard to tell.

Poor Sancha (bride of Joffre) doesn’t get to rock much hair at all — instead she’s got this white pearled caul and veil that’s in line with some of the other styles, but just seems like something that came from Michael’s craft store to me. 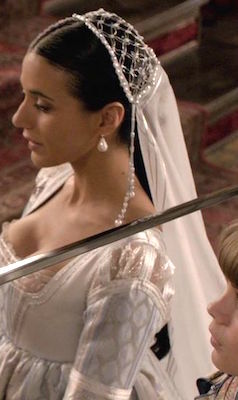 Too many white pearls just reads plastic to me!

Thanks to kissthemgoodbye.net for the screencaps! (And if you’ve got a source for season 3 screencaps, please let me know!)

Stay tuned for season 2 of The Borgias, when the hair gets Fabulous Up the Wazoo! What did you think of the styles in season 1 of The Borgias?