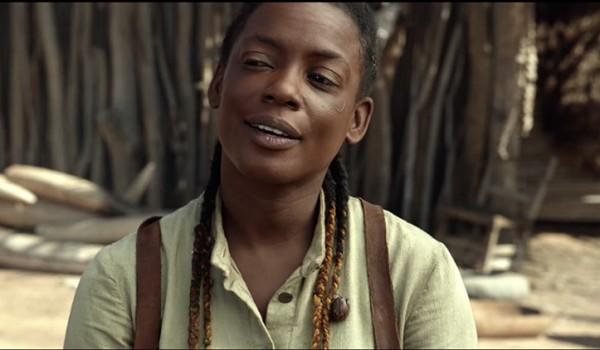 I’ve just finished watching this six-part miniseries, and I really want you to watch it too, so without further ado, my review:

The Book of Negroes is an adaptation of a novel by Lawrence Hill, which, full confession, I haven’t yet read (although it’s now shot up to the top of my to-read pile). It tells the story of Aminata, a young girl who lives in West Africa, and who is captured and sold into slavery in the 1760s (I think?). The miniseries shows her capture; the long, arduous journey to the American colonies; and her further journey through the Revolutionary War. Significantly, she becomes involved in the real-life Book of Negroes, which documented all of the Black slaves who fought for the British and were resettled in Nova Scotia. I don’t want to give away too much of the plot, so let’s leave it at that.

Why You Should Watch The Book of Negroes: A List This happened. For centuries. To millions of human beings. We have a responsibility to bear witness. But Yes, Prepare Yourself For…

Costumes in Book of Negroes that are 60% shitty. Now, my theory is that the production had a very minor budget and had to make do with rentals and extras who dressed themselves. There’s no other possible reason for the total mixed bag of semi-18th century, semi-1840s costumes, all mixed up together.

The costume designer is Kate Carin, who has been working since the early 1990s. Her filmography includes Shallow Grave (with Ewan MacGregor), Spice World (you know, with the Spice Girls?), and Hideous Kinky (with Kate Winslet). She hasn’t done a lot of BIG things, but she has done some historical costume works, including The Strange Case of Sherlock Holmes and Arthur Conan Doyle (2005) and an episode of Agatha Christie’s Marple (2013).

Sadly, I can’t find ANY news articles about her in terms of this program, so I can’t tell you her thoughts on the costume design.

Now, I want to pause and make clear my argument that Book of Negroes isn’t about the costumes, it’s about the history. You heard it here — this is Kendra, who is obsessed with the 18th century. But I forgave almost every costume error because I was so fascinated by the story and the strong acting from the leads. So please, don’t read the rest of this and think, “The costumes suck, not going to watch it.” Just, trust me. Watch it.

There were some things I DID like about The Book of Negroes costumes:

Many of the costumes made an effort to at least reference 18th-century styles: Even at her lowest point in slavery, Aminata is frequently shown wearing a bodice that is somewhat reminiscent of 18th-century stays. Here’s another 18th-century-esque bodice on Aminata.

When, at points in the story, she was doing better financially, some of her dresses were not half bad for 1770s-1780s! I’m not saying they’re great. But they don’t suck. Oftentimes, the men were in decently 18th-century-esque costumes, with coats and waistcoats in acceptable styles and tricorns. And in some scenes, the extras looked decently 18th-century-esque too. Of course, there were some sore-thumb moments, especially if you know anything about 18th-century costume: Other WTF things include: When Aminata first arrives in South Carolina, she is jolted by a vision of the woman whom I’ve pointed a red arrow at. Clearly, it’s supposed to show the contrast with an upper-class white woman, but, THAT DRESS. (It’s pretty, but I have no idea what era it’s supposed to be). And, Battenberg lace parasol??!! In the middle of the series, Aminata wears this leather belt/suspender thingie that’s definitely badass, but completely random and non-functional and not 18th century. Other scenes with extras were Not Good. I sadly can’t find you a shot of the London street, but even I said, “wooo, boy, that’s bad.” Here, we have an extra randomly wearing a prairie bonnet. That’s 1840s-50s, in case you need me to spell that out. I can tell you exactly which wig they used as a base for these, and it didn’t turn out well. There are times when Aminata, and some of the other Blacks, are shown wearing clothes that are clearly supposed to be work clothes. But, the whole concept of a men’s button down shirt doesn’t happen for another 50 years. She would be wearing something like the actor to the left, if she were wearing a man’s shirt. I’m glad they sprung for silk, but there isn’t anything 1807 about this. In fact, it’s not really from ANY era.

So, yeah. Clearly zero budget for costumes in The Book of Negroes, and I’m thinking the mishmash on the extras has to be from them supplying their own costumes. Extras — good for you for helping out and making your own gear! Costume department — good for you for being resourceful and getting shit done!

But All This Being Said…