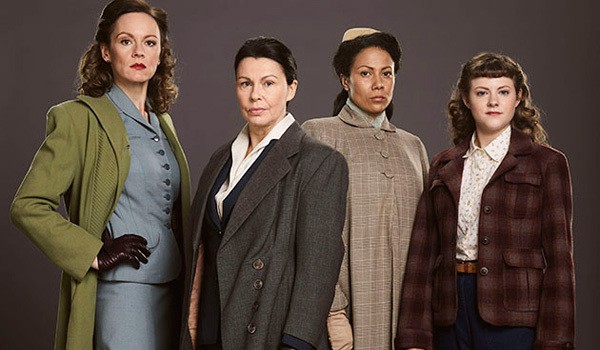 We all loved the original series of The Bletchley Circle (2012-2014) about four women who met cracking German codes during World War II and then teamed up after the war to solve civilian crimes. So we were excited when BritBox announced that its first original series would be The Bletchley Circle: San Francisco — an extension of the series, set in 1956, when two of the British characters move to America and join up with other female ex-WWII codebreakers to solve crimes. 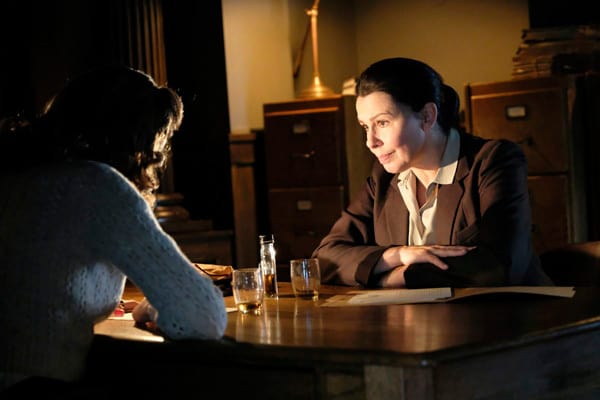 The returning characters are Jean McBrian (Julie Graham), who was the older, den-mother to the group, and Millie Harcourt (Rachael Stirling), the outgoing woman who vowed to ‘never be ordinary.’ It makes sense that the two unmarried women are the ones to leave their home country. They learn about a series of murders in San Francisco that are suspiciously similar to a murder of a wartime colleague, and off they go to try and solve the case. They meet Iris Bearden, who lead a team of female codebreakers at the Presido, and Hailey Yarner, a young mechanic during the war. 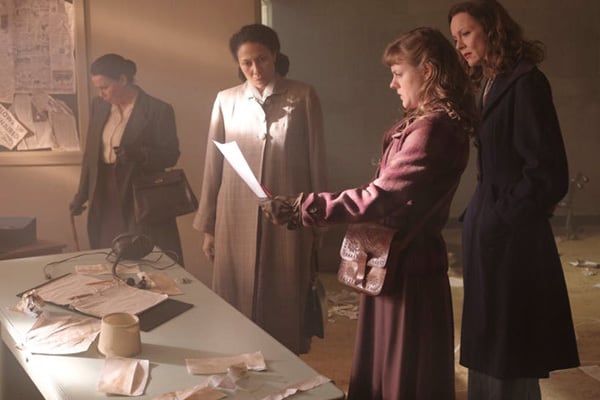 Much like the earlier series, the mystery is solidly plotted and suspenseful, but what really makes the story fascinating is, much like the original, the setting and the characters. Each woman is a fully realized person, believable, interesting, and historically accurate. Jean is at least a decade older than the other women, and she has the most job experience and skills of any of them, yet is consistently turned down for advanced positions due to her gender. Millie struggles against conventionality at every turn. The deep sexism that these women face is woven throughout the series in a way feels very of the period while also making subtle points about today. 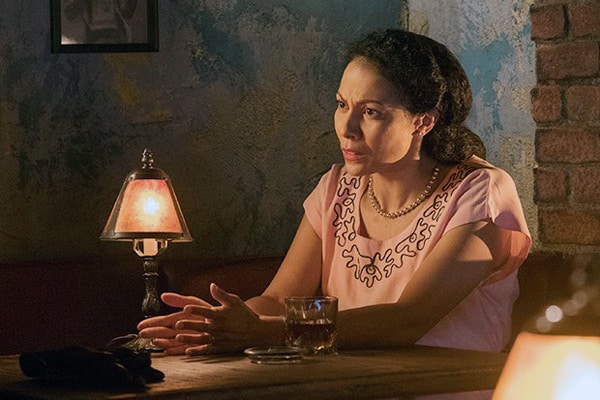 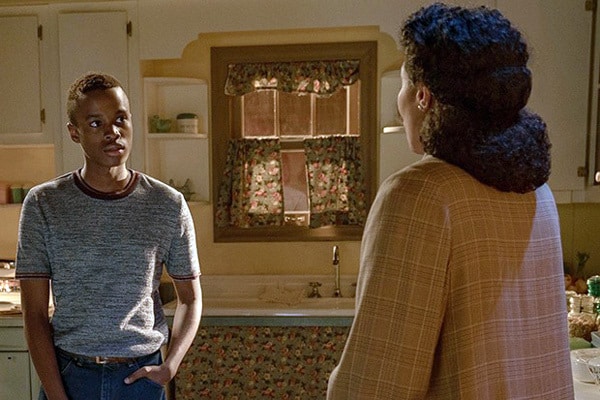 The new characters are likewise nuanced. Iris is an African-American women and is married with two children. Her family lives in the Fillmore District, which was undergoing redevelopment in the 1950s. Even another ex-codebreaker helps them occasionally, Olivia Mori, a Japanese-American woman now working at the San Francisco Police Department. Among other things, she points out that the Fillmore was formerly a Japanese part of town before WWII and the internment camps. It’s little scenes like this that give historical context to the show, and, for a San Francisco Bay Area native like myself, feel reflective of current racial and housing issues in the area. 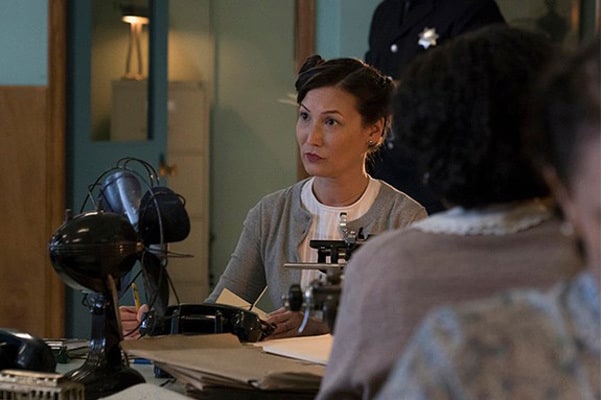 So, costumes? Yeah, they exist, but the clothes aren’t flashy. These women and the people they associate with are middle-class 1950s folks, going about their everyday business. Not a lot of cocktail parties or such. Similar to the original series, the fashions are simple and sober, accurate, getting the job done. Probably could use more hats on everyone, but otherwise, it looks OK. 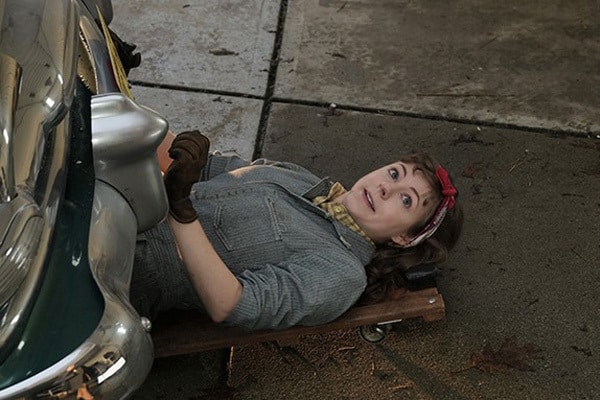 I couldn’t find an interview with the costume designer Beverley Wowchuk, but production designer Joanna Dunn did discuss her research into color scheme with Bradford Zone:

1956 is kind of the cusp, a little before what we think of as the ’50s, iconically. It’s not sock hops and poodle skirts, you want to keep a bit of a foot into what Bletchley was in the U.K., so it’s more pencil skirts, more streamlined, a bit more architectural. I decided to keep the palette. ’50s colours are amazing, but you have to be careful because a lot of the ’50s colours are not good on people’s skin tones so you are restricted to more blues, yellows, greens for the palette and tone. I wanted it to be bright and exciting because it’s such a fun and colourful time, but I also didn’t want to detract from people, so it’s taking that vibrancy that was a direct contrast from England and taking it down ever so slightly to make it fit. I wanted a good transition from England to here, and still being able to make it look like the land of milk and honey. 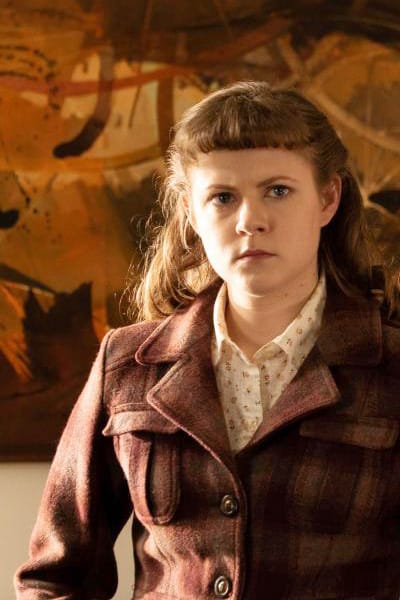 My only complaint? I need more! BritBox is only rolling out one episode a week, which feels crazy slow. IMDB says that eight episodes were filmed total, and there’s only a couple available so far. But it’s really bingeable and could easily be watched faster! These are great characters, and the first mystery was wrapped up in two eps, which felt like a great setup for more stories with the team. 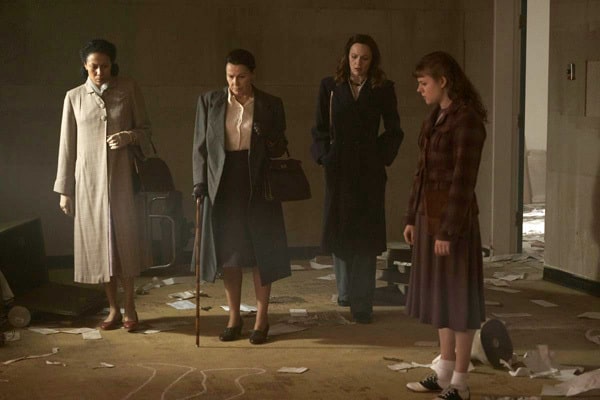 Have you watched The Bletchley Circle: San Francisco?