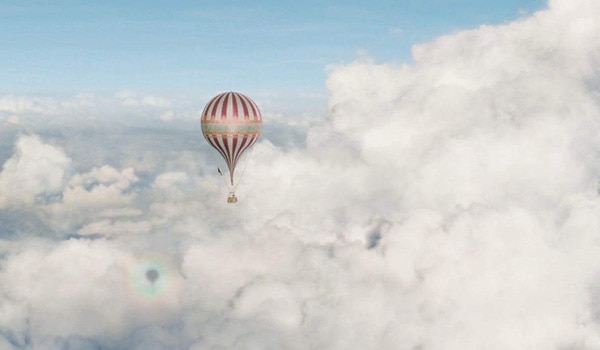 As one of Amazon’s ventures into filmmaking, The Aeronauts (2019) had only a brief theatrical run, and that’s too bad. I watched it on Amazon Prime on my computer, and while the movie looked fine, I think this particular story would have been a lot more wild and exciting on the big screen. About three-fourths of the movie takes place up in the sky on a hot-air balloon, which is beautiful and amazingly filmed, but loses a little something on a small screen. 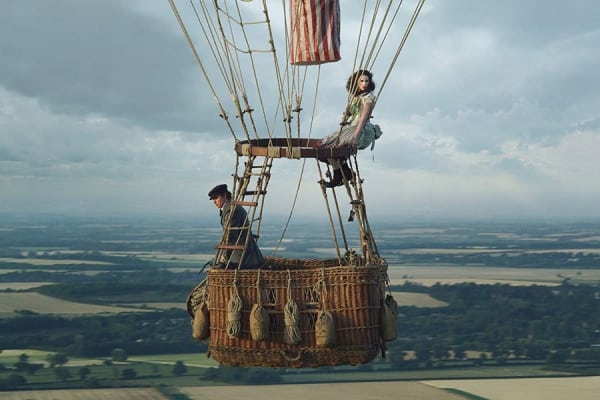 Set in 1862, the movie is very loosely based on a real person, a scientist James Glaisher (played by Eddie Redmayne), who was a founding member of the Meteorological Society in the U.K. He was a pioneering balloonist who made many ascents to measure temperature and humidity, and on September 5, 1862, he broke the world record for altitude. However, he passed out around 8,800 metres (28,900 feet) before a reading could be taken — it’s this ballooning trip that the movie is kinda sorta based on. 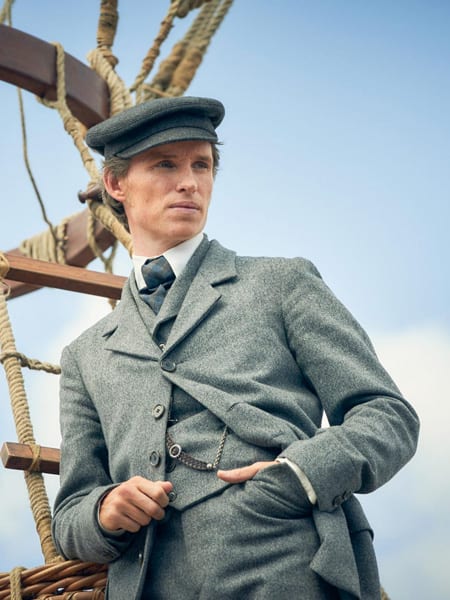 However, his pilot for this trip is a fictional woman, Amelia Wren (played by Felicity Jones). She’s inspired by a couple of real people, mostly Sophie Blanchard, who was the first female professional balloonist, and Margaret Graham, a British aeronaut and entertainer. Some may see this as being politically correct or woke or even anachronistic feminism, but I really didn’t mind it. Female balloon pilots did exist during this time, so the movie isn’t inventing something that didn’t happen. The film is just smushing together a real person with another real event from the same time period for dramatic tension. And, most importantly to me, this isn’t to create a romance. James and Amelia have a contentious relationship, but it’s based on their different types of skills and working methods and clashing personalities. They end up respecting each other but not falling in love. 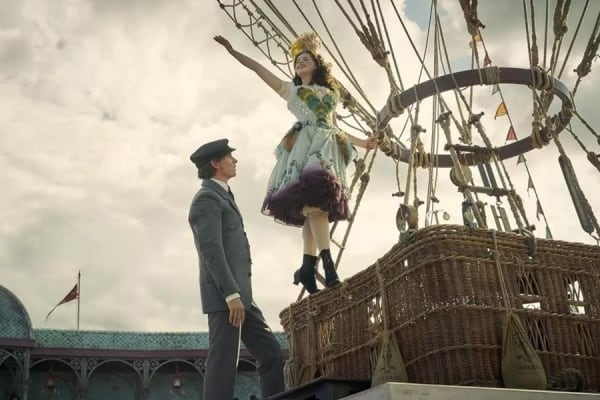 Other plot points are more obviously manufactured, such as the action sequences, which give the movie excitement, even though they seem pretty damn implausible. And Glaisher’s friend and fellow scientist John Trew is played by Himesh Patel, so clearly of South Indian descent, which would have been unlikely to impossible in Victorian England. I didn’t mind these elements much either because the film is very clearly presented as an adventure story, not a strict history. There are slight nods towards science and invention, but much more is about risk-taking and fulfilling your dreams and life’s destiny. 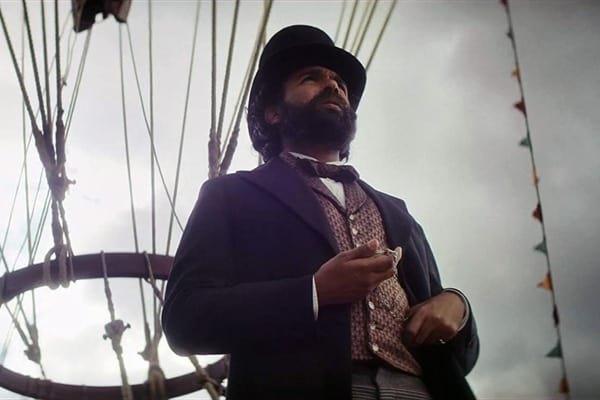 As I mentioned, most of the movie takes place on the hot-air balloon, and essentially the action occurs over the course of about one day, with a few flashbacks. That means there aren’t a ton of costumes. Alexandra Byrne (Mary Queen of Scots, Murder on the Orient Express, Elizabeth: The Golden Age, Elizabeth) designed the costumes, and most are are very straightforward mid-Victorian. 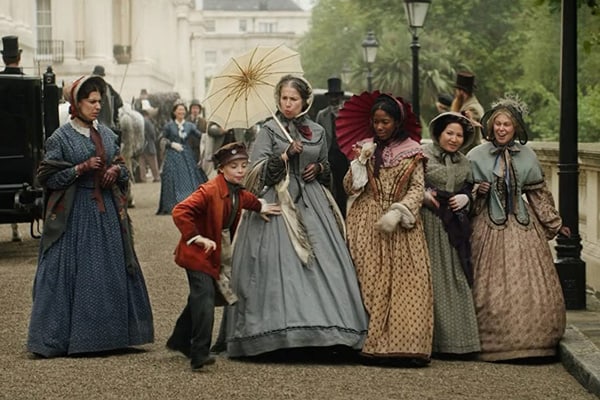 First, let’s look at some of the on-the-ground costumes that Amelia and her family wear. She seems to be from an upper-class family as they all dress rather fancy, and they disapprove of her ballooning hijinx. The clothes are pretty if you like that big-hoopskirt-thang. In an interview with Front Row Features, Byrne commented on her use of color in even the supporting characters’ costumes:

“I really enjoyed playing with color. I liked the cobalt blue dress that Amelia’s sister, Antonia, is wearing during the launch. I took that idea from a dress I saw at the Victoria & Albert Museum in that color. The Victorians wore that color a lot. To be able to use that dress and still be that strong with the color was very important.” 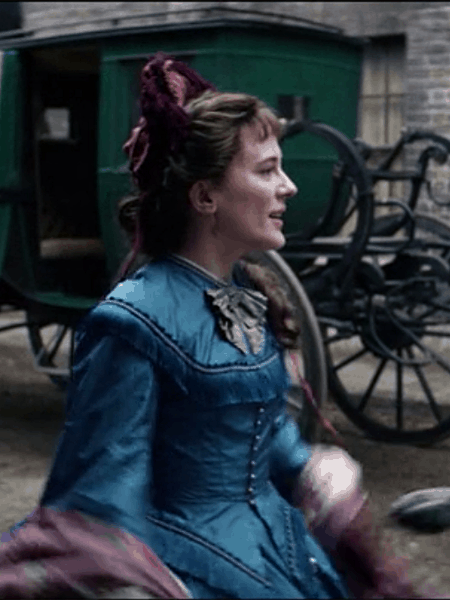 This is one of the first scenes in the film, and the dress color is very striking. 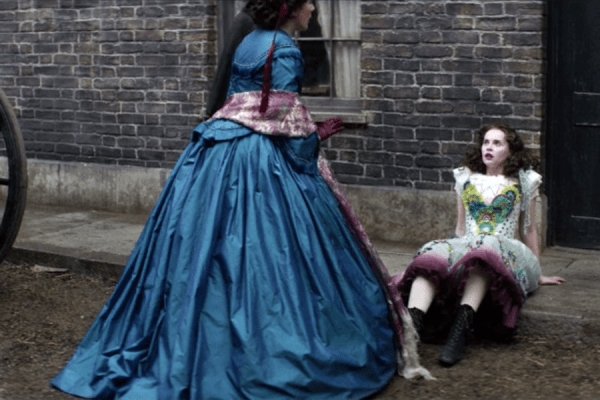 Especially with the huge, trailing skirt in the drab street, and further contrasted with Amelia in white, though the purple trim on Amelia’s skirt hem ties in with the purple paisley shawl her sister holds.

The V&A’s collections online do have several bright blue dresses that Byrne could be referring to. Certainly the color was popular in the period! 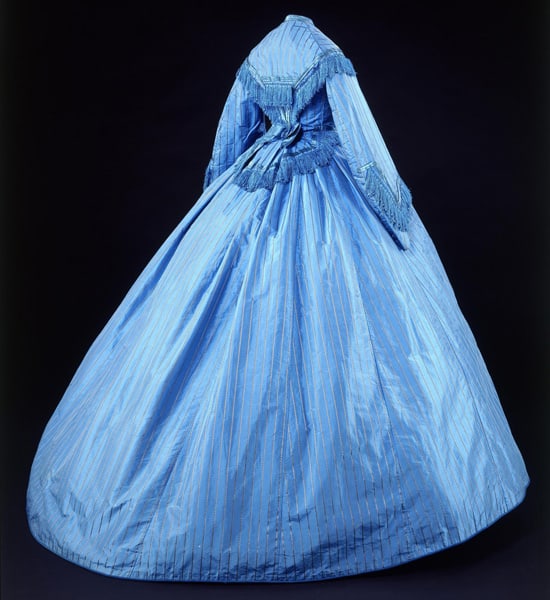 Later in the film (though earlier in the timeline, since it’s a flashback), Amelia also wears a blue gown, though deeper darker blue. The obvious symbolism is the many blue shades of the sky, in addition to the popularity of the color in the period. 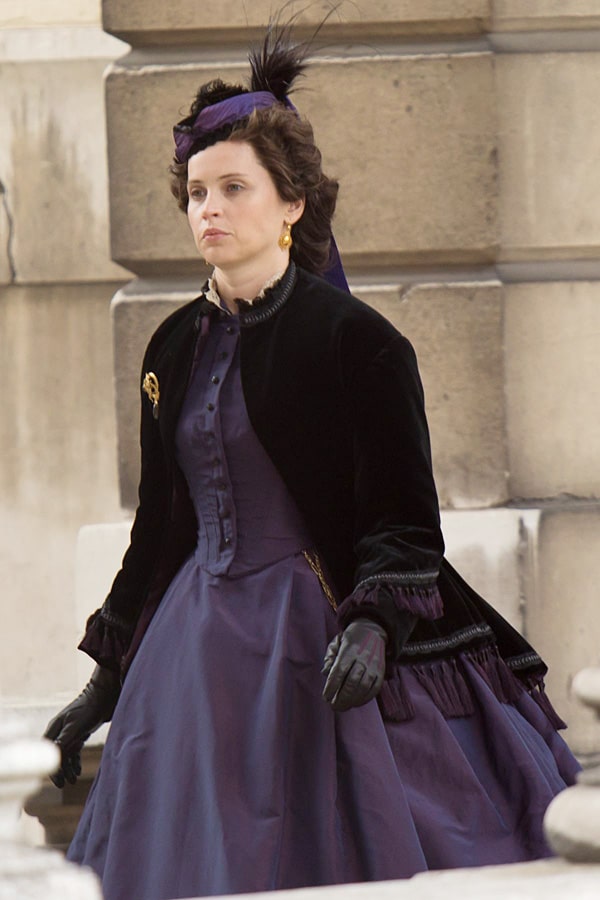 But Amelia’s first costume we really see onscreen is a circus-y performance outfit that she wears to jazz up the balloon takeoff show. Costume designer Alexandra Byrne told the LA Times: “The idea was Amelia had an old evening dress that she repurposed into her circus girl costume. A bit home-made, a bit ad-hoc, but I wanted it to have a kind of energy and spontaneity to it.” I don’t really see that, but this costume did remind me of Victorian circus and theatrical performance outfits that you see in postcards. 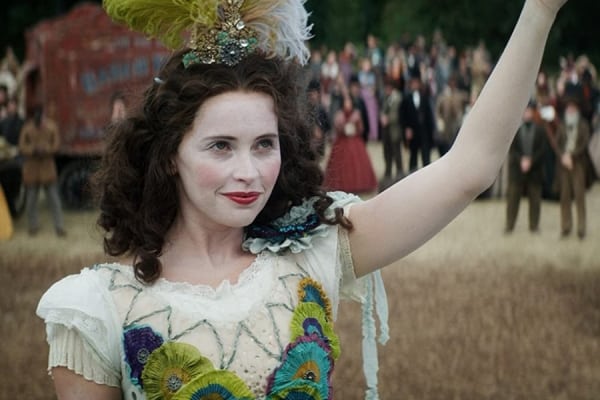 I guess the stitching and appliques have a homemade quality. 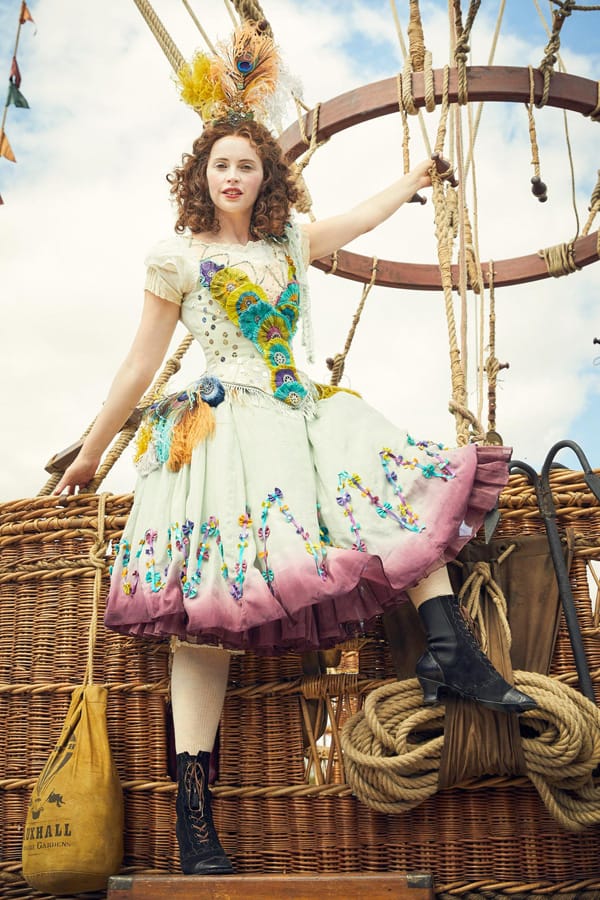 But there’s a lot of work put into this for just a hacked-up evening gown!

For comparison, some female performers in outfits along the same silhouettes and with lots of trim… 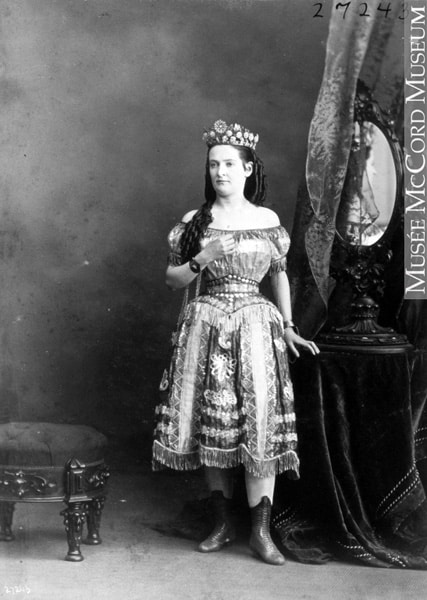 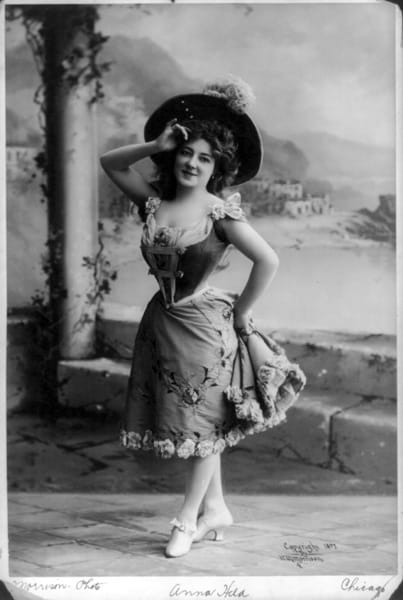 “Women, in the 1860s, who wanted to do something outside the boundaries of the conventions of marriage and bringing up children, there was this huge balance between propriety and adventure, and between modesty and fame, and how they navigated that to do what they wanted to do. It was a struggle between feminine modesty and a desire to construct an authoritative voice. A lot of women chose to embrace the trivial in order to suppress charges of immodesty. That’s what Amelia does through being a circus performer because for Glaisher to have a woman pilot would have made him the laughingstock, so she makes herself trivial by making herself look like a circus performer. She doesn’t undermine him in any way.”

It’s a subtle thing, but Amelia’s character is constructed as a very traditional Victorian woman with one very non-traditional interest. This is why I don’t feel like she or this film dabble in anachronistic feminism. She got into ballooning through her husband — which is how several of the early famous female balloonists did — and became passionate about the activity on her own. But she’s still trying to do it within most of the strictures of Victorian society. This is shown most clearly through her dress. She’s not particularly a tomboy, she’s not a rebel or an outcast, she simply has a unique interest for the period and wants to pursue it. She wears hoopskirts, she puts her hair up, she’s been married, she seems OK with all that, but she also wants to fly balloons, and she should be able to combine those things if and when she wants too. \m/ 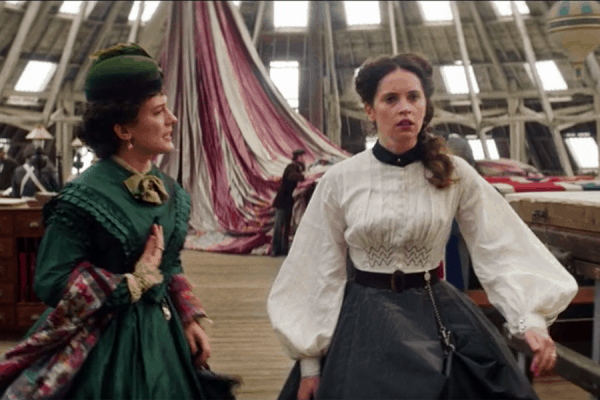 Amelia & her sister disagree on many things, but they’re both wearing typical women’s clothes for the 1860s. Amelia is in a somewhat more “working / businesslike” outfit because she’s overseeing work on the balloon.

Finally, there’s her ballooning outfit. While Glaisher keeps wearing his one suit as the balloon rises, Amelia does a quick-change out of the circus-y dress and into her “oilskins” — a warm, practical outfit. Alexandra Byrne said she read diaries of female mountaineers from the 19th century, and in Front Row Features, she explains:

“When you read the diaries, you realize that after they left the base camp in their crinolines and petticoats and pretty skirts, and when they were a distance away from base camp, they took off those clothes and hid them behind a rock before making the climb, and afterward put them back on and returned to the world of people seeing them fully dressed again.”

Byrne designed a trouser suit for Amelia with some input from Felicity Jones. In the LA Times, she said:

“From the start, you get an actor’s thoughts on character, you see the way they wear clothes, you understand their specific coloring, their scale and proportion, and so you start to feed in all these factors. And because this story is so physical, we were able to make multiple prototypes, and Felicity was able to rehearse in them so we could see how the costumes behaved and then developed them with her.” 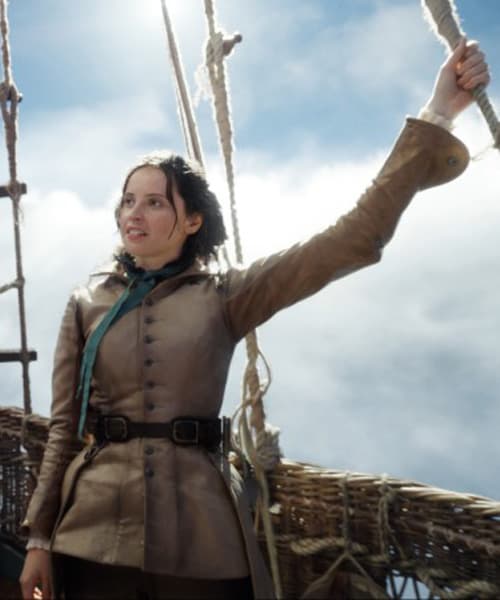 While she had research, Byrne admits (again, in the LA Times):

“We had to make it up — but we pinned a lot of it to the clothes of the period. Women’s riding habits were made by gentlemen’s tailors, so we decided to follow that line, and we used notions of men’s period tailing. We looked at a lot of Victorian swimwear: modesty but with freedom of the body. We literally evolved a new world.” 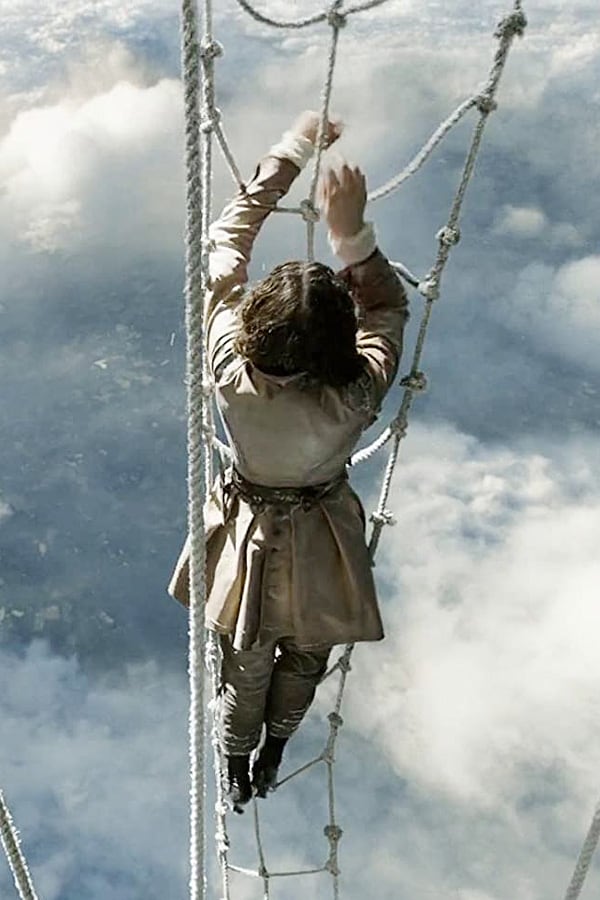 Oh, one last bit, for Kendra — yes, Byrne talked about the dog in the LA Times:

“We did a lot of fittings with Posey [the dog]. She wasn’t just being held, but she needed to run and have the parachute drag behind her. We did coat fittings, harness fittings, parachute fittings. It was really, really great fun.” 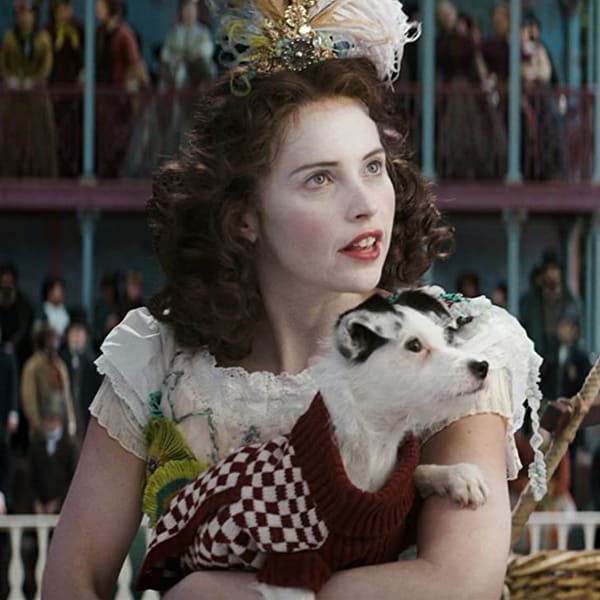 Have you seen The Aeronauts? It’s on Amazon Prime, check it out!