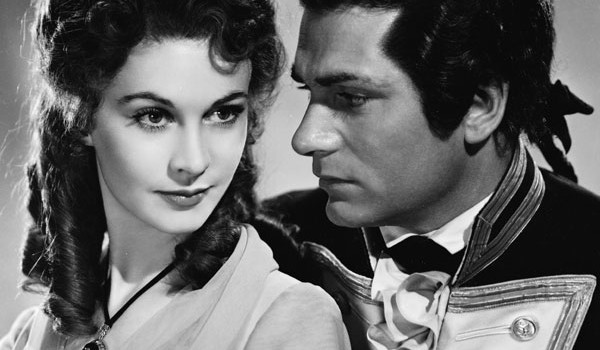 Vivien Leigh’s performance of Lady Emma Hamilton is fantastic in That Hamilton Woman (1941). Given far more range here than she was in Gone With The Wind (1939), it’s really something to see her flexing her acting muscles against her then-husband Laurence Olivier’s Admiral Nelson. The film is a really fascinating take on the relationship between Lord William Hamilton, Emma, and Nelson — something of a parallel to the Devonshires arrangement portrayed in The Duchess (2009).

Lord Hamilton is content to take the beautiful Emma off his nephew’s hands and bring her to Naples where he is the British Ambassador. At first she is simply his beautiful mistress, but then he marries her and makes her respectable. She becomes the confidant of the Queen of Naples (who was the elder sister of Marie-Antoinette–a fact that’s not really addressed in the movie, despite the heavy revolution-in-France subplot), charms all of Naples society, and then manages to use her brains for policy purposes in securing ships to aid the then-Captain Nelson against the French. Over a period of several years, Nelson and Emma meet up and develop a friendship that deepens into love — much to the chagrin of Nelson’s stepson who instigates the backlash against Emma that is to come when he alerts his mother to what Nelson and Emma are up to in Naples. The portrait of Vivien Leigh as Lady Hamilton, based on the 1785 portrait of Emma by Romney.

As usual, Vivien Leigh is magnificent in the part, managing to override the frivolous aspects of Emma’s character with a sharp intellect that feels authentic to both the actress and the role. I was actually pleasantly surprised that this film stood up to the test of time and comes across as rather modern in its approach to a strong female main character and a love triangle that doesn’t straight up cast her as a scheming whore or a woman done wrong by her man. Particularly of note is the way that Emma’s and William Hamilton’s relationship is treated — neither are unaware of the fact that Emma was brought to Naples to be another pretty addition to William’s collection of fine antiquities. Both accept that the marriage is not one based on love, but it’s also not based on greed. It’s amicable, and it serves both of their needs well. Even when jealousy is addressed as Emma’s relationship with Nelson progresses, William is philosophical rather than accusatory. He’s not exactly giving her permission to pursue the relationship with Nelson, but he’s also not stopping her. He allows her the choice to do with her life what she will and even expresses a sort of compassion for her situation.

The other marriage in the mix, that of Nelson and Lady Nelson, is more fraught with the tension of betrayal, but it is mostly a subplot that serves not to tarnish Emma as the role of the man-stealing whore, but to allow both Nelson and Emma to struggle with the effects of their infidelity in both of their marriages. Ultimately, neither spouse of the the lovers divorce them, which in itself causes the “downfall” of Emma after Nelson’s death at Trafalgar — but it is a downfall that Emma has seen coming and more or less accepts as the price she had to pay to be with Nelson. At every step of the way, Emma is shown as making her own decisions about her life, fully understanding how each move she makes will unmake her eventually. It’s actually a type of strong female character that I’ve rarely seen put to film these days, and that in itself is reason enough to watch this. The other reason is, of course, the costumes. This film takes place over the years from 1790 to 1815, but the costuming is pretty much all over the map and mostly falls into “Hollwood Glam” rather than anything remotely historically accurate. That doesn’t diminish the fact that the costuming is utterly fabulous, however. René Hubert is in fine form here, working a modern glamour into 18th-century silhouettes that come across as haute couture historical. But like I said, that is not a bad thing. In fact, it’s one of the few instances in a film where I feel like the “modern twist on historical” actually works to the film’s advantage, as it allows for the acting to shine without overwhelming the visual impression created for the audience.

It helps that Vivien Leigh doesn’t let the clothes wear her, which is something that I felt happened with more recent historical adaptations such as Anna Karenina (2012) where Keira Knightley seemed to be absorbed into the costuming and constantly fighting against it. I’m actually hard pressed to think of a contemporary actress who can pull off a costume without getting swallowed by the fabric and set dressing. Clearly, Vivien Leigh was a rare breed in that regard. The other thing worth noting about this film is that Winston Churchill is credited as having a collaborative role with director/producer Alexander Korda in creating That Hamilton Woman. According to Frank Miller over at Turner Classic Movies:

“[Korda] had also been asked by Prime Minister Winston Churchill to use his business offices in New York as an information clearing house for British Intelligence and to come up with a film that could help with the war effort … After Korda rejected a film about Elizabeth I’s romance with the Earl of Essex, which would have miscast the young and beautiful Leigh, and a screen version of Shakespeare’s Henry V, which didn’t have a large enough role for her, Churchill suggested the story of Admiral Nelson and Lady Hamilton. According to legend, he even wrote some of Nelson’s more political speeches about the need to stand up against dictators. Though the admiral was referring to Napoleon, the reference to Hitler was obvious. The film, however, was not a political diatribe and Korda cleverly had the screenplay focus on the romantic story. This masked the propaganda while also providing a showcase for Leigh, who was clearly the bigger star on the strength of her success in Gone with the Wind (1939).”

The patriotic subtext in the subject matter is fairly unambiguous given the period the film comes from, but it manages to stand up pretty well 74 years later as a good, solid story that was ahead of its time.

Share your thoughts about That Hamilton Woman in the comments!