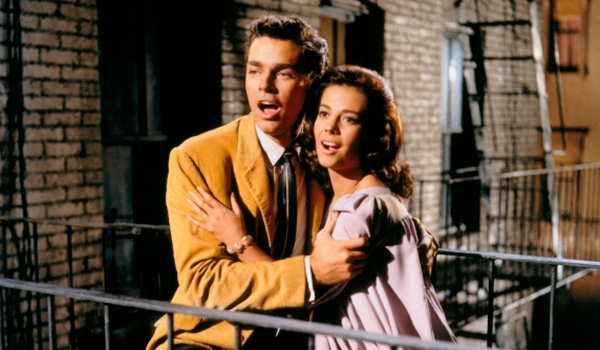 With a remake coming to theaters, I thought it might be worth looking at the original movie of West Side Story (1961). Though I’m the designated fan of movie musicals, this is not one I was familiar with because it seemed too “modern” to me as a kid. Y’know, compared with my faves like Camelot and My Fair Lady, set in the medieval and Edwardian eras respectively. Watching West Side Story now though, it seems particularly dated, not in costumes but when it comes to casting and some of the theater conventions of dance and song. But it’s still an entertaining watch because the production has requisite catchy songs and high-quality dance numbers, and it fulfills the brief as a modern take on Shakespeare’s Romeo and Juliet.

While it was made around 1961, the story is set in the 1950s when the Broadway show was first written. Onscreen, this close of a look back is always suspect to me. It’s so easy for the production to lapse into looking and acting just “contemporary” with when it was made, instead of making a solid attempt at the historical period. For comparison, a lot of movies about World War II that were made in the decade immediately after that war may have some uniforms and equipment that are legitimately from the 1940s, but the civilian clothing and hairstyles tends to look far more early ’50s than the war-rationing styles. West Side Story isn’t great in this regard, but there are lots of little clues to put the story slightly outside the “this is happening today” realm.

Most noticeable are the boys’ hairstyles — in both of the teen gangs, the guys are going for the look of ’50s greased-back hair and pompadours. This helps show the audience who they’re supposed to be, in a way that looks like a caricature now (but the film is one of the things that contributed to that image). Their language also emphasizes the ’50s period, with frequent use of Beatnik terms like “daddio” and “hip,” plus the snapping motif in the music is evocative of the Beats and jazz. 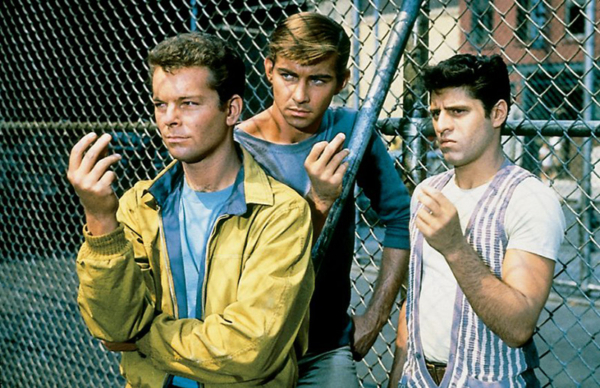 The Jets stake their turf. 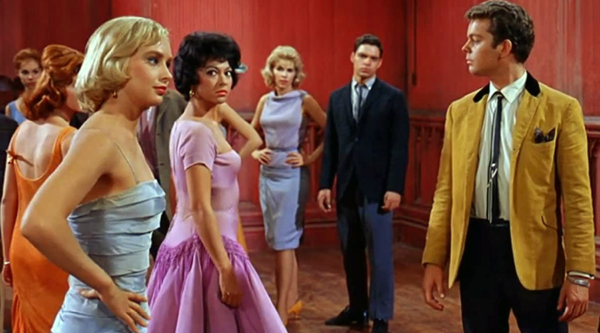 At the big dance, the leader of the Jets, Riff (Russ Tamblyn) shows his gang colors in gold, and the jacket’s black accents and skinny tie seem like a nod to Teddy Boy styles. Meanwhile, Anita (Rita Moreno) in purple serves some epic side-eye.

There’s a visual line drawn between the two gangs with the white Jets wearing more subdued yellow, orange, and blues and the Puerto Rican Sharks wearing bright purples and reds. The girlfriends of each gang follow along with these colors, and it’s most clear with the Puerto Rican women wearing vivid dresses; if they have a full skirt, there’s also a bright petticoat. The exception is Maria, who wears white and light colors, as the virginal Juliet at the center of the story. 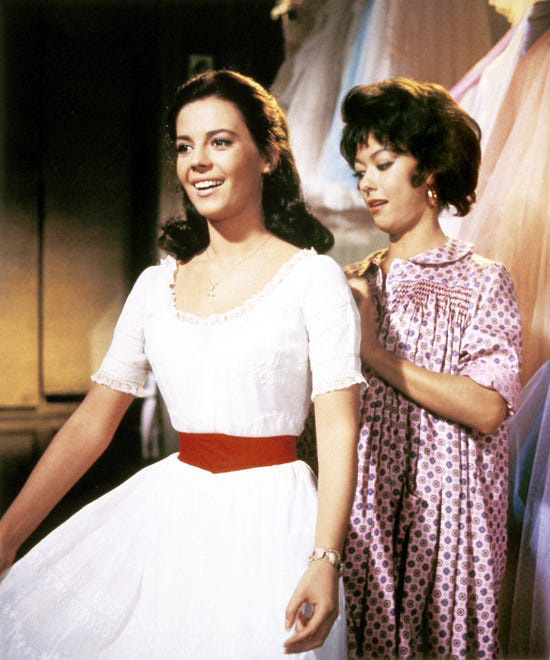 At the dance where she meets and falls immediately in love with Tony, Maria wears this white dress. 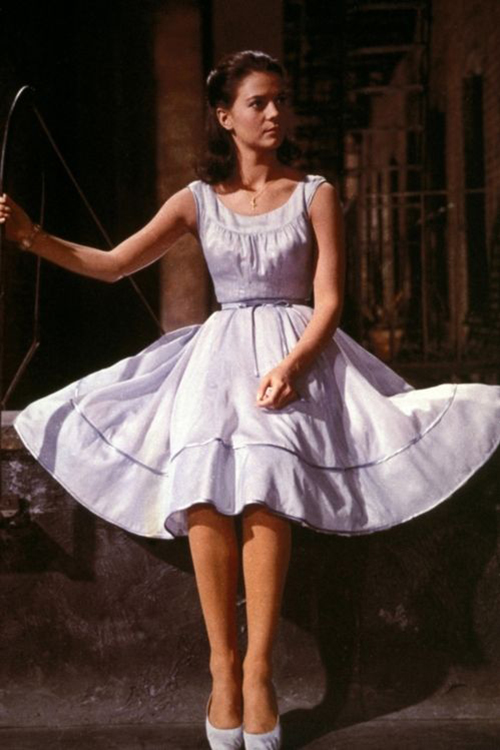 Later in the movie, she dances solo on the roof in pale blue.

Of course, the elephant in the room is that Maria is played by Natalie Wood, and most of the other actors playing Puerto Rican characters are white. Rita Moreno is Puerto Rican, and she’s stunning as the character Anita — she won an Oscar for this role. But she described in a recent Fresh Air interview how all the actors were made-up to look darker:

“I remember some shots of George Chakiris [who plays Bernardo] where he looked like somebody had taken him by the ankles and dipped him in a bucket of mud. It was so thick, and it was so dark that we would — our faces would streak and show our real color underneath. And I remember saying to a makeup man once, ‘I don’t know why I have to be this color. … This is not my color.’ And he actually said to me as he was making me up, ‘What are you, racist?’ Well, talk about nonplussed. I didn’t even know what to say to him.”

The 1961 film further stereotyped the Puerto Rican characters by having them all speak with a broad accent (which sounds especially weird coming out of Natalie Wood’s mouth, and then she sings with Marni Nixon’s voice!). The 2021 remake tries to correct this in casting Afro-Latinx actors in the key Puerto Rican roles, so that will be interesting to compare. 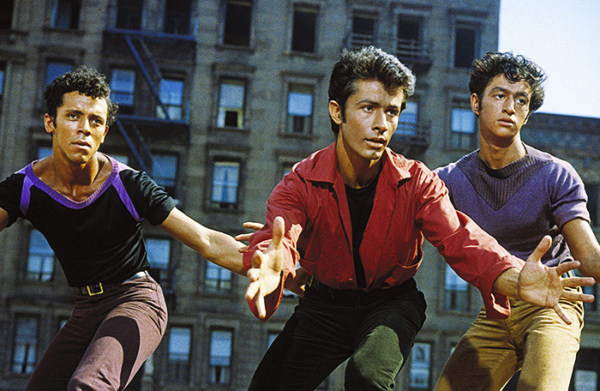 There’s that brownface on George Chakiris (center) that Rita Moreno talked about. 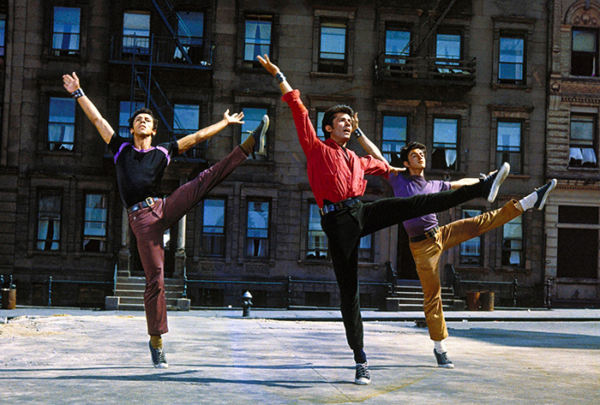 For all the old cringes in the original film, one thing that’s still relevant is the racism expressed in the play’s text and songs. The white characters denigrate the Puerto Ricans, and the Puerto Rican characters point out the many ways that they’re discriminated against. The song “America” contrasts the opportunity of this country with the harsh realities that immigrants face when they get here. While the women sing in praise of their new country, the men point out that anything good in this country is only available to whites. There’s a bite in the music, and the whole argument feels unresolved. Because it is still unresolved in America. 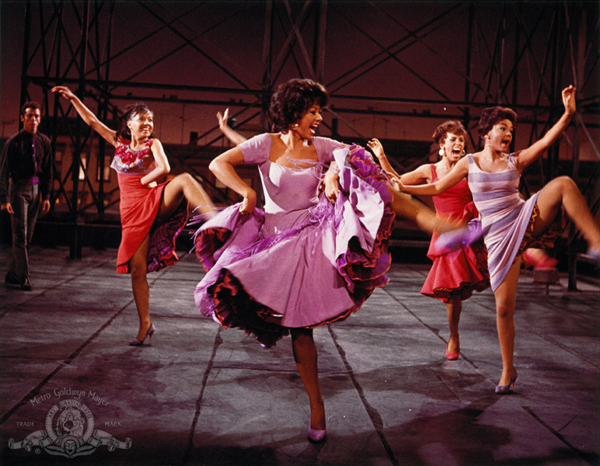 Far and away, the best thing about this movie is the dancing. At first, it’s a little jarring to see gangs “fight” each other through dance, but once you give into a willing suspension of disbelief and just admire the amazing precision, it’s great. And any time Rita Moreno is dancing onscreen, you’ll be entranced. She set a high bar, and we’ll just have to see if the 2021 version can meet it. 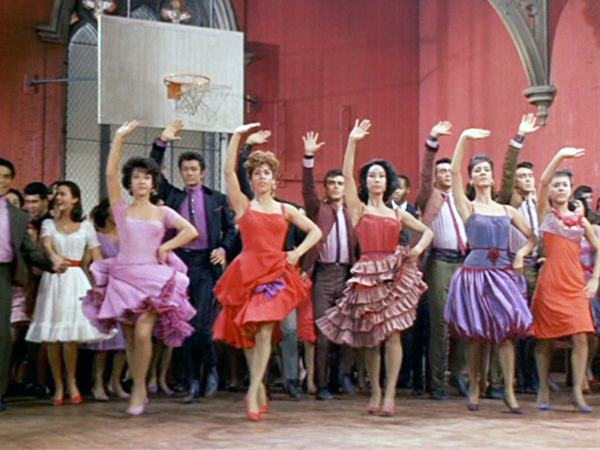 How do you feel about the original West Side Story? Will you watch the new version?