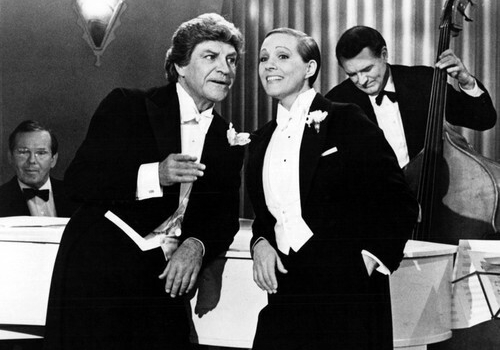 Going back to watch your childhood favorite films is always fraught. Will they hold up under the cold, cynical eye of adulthood? What terrible prejudices lurk therein, waiting to be discovered with cringing horror when you what realize racism/sexism/homophobia was flying under the radar 20, 30, 40 years ago? I’m not going to lie, I was more than a little worried when I decided to re-watch Victor/Victoria (1982) for this post. It had been probably a good 20 years since I had last seen it, but it had been on heavy rotation throughout my childhood, so while I remembered it fondly, I also remembered how much I’ve remembered loving other films as a kid only to realize how many reprehensible themes they contained as an adult. And considering the plot of Victor/Victoria broaches not only the topics of homosexuality, transgenderism, and feminism, it also is a slapstick-y comedy, there was a part of me that was watching through my mental fingers, waiting for the moment when some awful statement about sexuality or gender identity would explode forth and ruin my childhood memories entirely.

I’m relieved to report that pretty much didn’t happen. There are some minor aspects to the film’s plot that, if it were made today, could probably be handled with a little more sensitivity, but otherwise, Victor/Victoria holds up. In fact, it more than holds up. It damn near is better than any other film out there at addressing the fluid dynamics of gender identity, gay, straight, cis, trans, and everyone in between. And it has one of the best on-screen couples ever, Julie Andrews and Robert Preston, whose chemistry is delightfully cozy as straight woman and gay man teaming up against the heteronormative world of the 1930s. Victor/Victoria was based on the 1933 German film Viktor und Viktoria, which I haven’t seen, so I can’t make any specific comparisons between the two films and whether one is intrinsically better than the other. The screenplay was adapted by Julie Andrews’ husband, Blake Edwards, who also directed the film.

A cynical person might not buy the premise of Julie Andrews, unquestionably feminine as she is, playing a role of an androgynous male drag performer (or “a woman playing a man playing a woman” in the film’s own words), but Andrews’ portrayal of “Victor” is convincing when you take half a step back and look at it from the standpoint that Victor is a man because he says he is. There’s even an early scene between Victor and the excessively manly King Marchand (played by the excessively manly James Garner), where Marchand attempts to intimidate Victor into admitting that he is actually a woman in drag.

Victor: Your problem, Mr. Marchand, is that you’re preoccupied with stereotypes. I think it’s as simple as you’re one kind of man, I’m another.

King Marchand: And what kind are you?

Victor: One that doesn’t have to prove it. To myself, or anyone. Her expression is full of “fuck you.” and I love it.

Of course they fall in love, and much of the time devoted to their love affair is focused on Marchand feeling like he has to keep whatever tenuous grip on his masculinity he can as he realizes the implications of living openly with Victor when Victoria tells him she doesn’t want to give up being Victor. This is really the only thing about the film that I didn’t super care for. But thankfully, the parts of the film dealing with Marchand and his fragile hetero-masculine identity are brief and filmed with a gently mocking side-eye to the audience that acknowledges Marchand’s rigidity is what is truly abnormal. That said, he does try.

So let’s talk costumes, which were designed by Patricia Norris (Twelve Years a Slave, The Assassination of Jesse James by the Coward Robert Ford). They show a good range of styles for the early 1930s, from day to evening-wear, with a couple of notable stand outs: This Erte-esque fringe number, worn by Julie Andrews in her debut performance as Victor, is perhaps the most iconic costume from the film. A close-up of the rhinestone fringe cap? Wig? I don’t know, but I love it. This is supposedly the costume worn by Julie Andrews, but it’s paired with a different marabou-edged velvet coat that I don’t recognize from the film. Toddy and Victoria when they first meet as down-on-their-luck performers. The dress Julie Andrews wears under this coat is fantastic. Here’s an OK screen grab of it. It looks like a wrap dress (or possibly a surplice bodice, hard to say) with a red and black waterfall collar. The sleeve cuffs match the collar. This one gives me strong David Bowie vibes. Casual Victor is probably my favorite look of all of Julie Andrews’ costumes from the film. Though this isn’t too bad, either. (Full disclosure, I’m pretty sure this is a shot from the Broadway production that Julie Andrews starred in in 1995. But it’s still applicable, so I’m including it.) The “Shady Dame from Seville” costume. According to Wikipedia, the dress was actually made to fit Robert Preston (shown here during the fabulous finale performance), and then pinned to fit Julie Andrews.

My favorite line in the whole movie. Lesley Ann Warren plays Norma Cassady, the utterly reprehensible girlfriend of King Marchand, and she does it with what can only be described as relish. Anyway, back to this hotness. I aspire to be this utterly glamorous one day. I’d also like to take a moment to mention the gorgeous Art Deco sets in the film.

To sum up, you should definitely give this film a watch, if you haven’t already seen it 943 times (and let’s face it, I know our audience likely has seen it at least that many times). Hell, you should watch it a 944th time, it’s that worth it. And on that note, I just want to say…