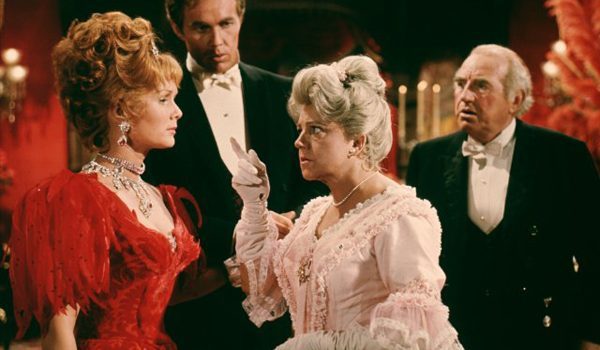 Debbie Reynolds felt a particular fondness for the title character of The Unsinkable Molly Brown (1964), saying “In life, I’m like Molly Brown. I’ve had tough times along the way and gone through experiences that many women have gone through. But I ain’t down yet.” Well, the fictional Molly Brown was more like Reynolds than the real-life Margaret Brown was like the subject of this musical. The actual person was a renown survivor of the Titanic who also helped impoverished children, women, and World War I refugees, but the events in this movie (and the theatrical show it’s based on) are almost entirely invented. 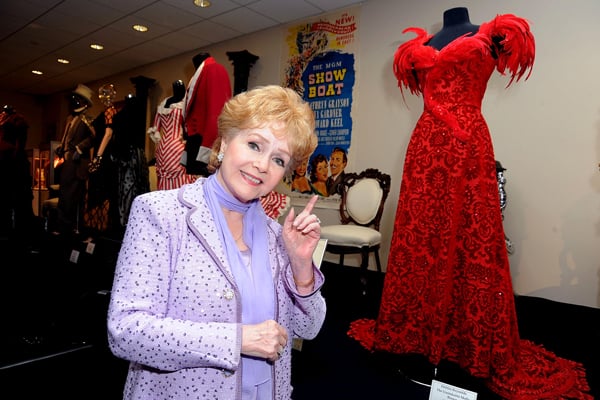 Debbie Reynolds with the red velvet gown she wore as Molly. Read more about Reynolds’ vast collection of movie costumes and memorabilia.

In the film of The Unsinkable Molly Brown, Molly is an orphan found on the Colorado River (so her life is neatly bookended by water-related trauma), and she was raised as a rough-and-tumble tomboy by her solo adoptive father. She dreams of seeing the world and of having a measure of physical and financial security not found in their poor and rural setting. Thus, teenage Molly sets out to the nearest town where she talks/sings her way into a job as a saloon girl and meets J.J. Brown. She had been set on getting to Denver in the hope of marrying a rich man so she’d be able to give her father a nice place to live. But, of course, she falls in love with J.J., who’s almost as poor as she. Except he has an unused mine that eventually strikes it rich for the couple, and ta da they move to Denver and create the biggest, gaudiest nouveau riche house in the city founded by the very definition of nouveau riche. 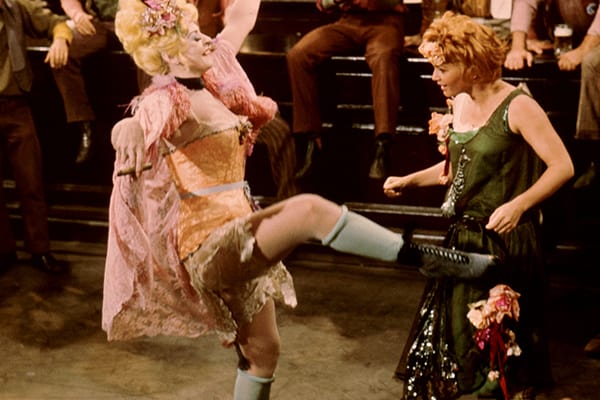 Molly battles professional saloon girls to work her way up in the world. 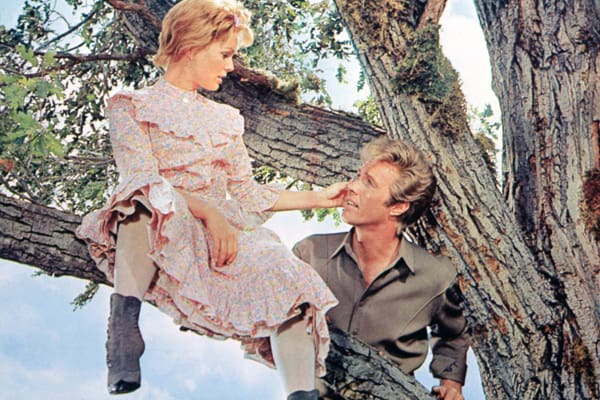 Wearin’ calico, fallin’ in love with yr standard-issue blond hunk. He sure can sing ‘n build a tidy cabin!

Then the story becomes a battle of elites vs. backwoods country folk, where Molly Brown tries to rise from her humble beginnings and be accepted by the upper crust. Some reviewers in the 1960s — such as Variety and the New York Times — found the character of Molly to be shallow and obsessed with money. But I think they missed something about the story and Reynolds’ portrayal of Molly Brown. She’s not a money-grubber or social climber. She doesn’t revel in the material goods for their own sake — compare with someone like Lorelei Lee singing “Diamonds Are a Girl’s Best Friend” in Gentlemen Prefer Blondes (1953). Molly’s wants are more simple, just one separate stove for cooking and one stove for heating, plus a big brass bed. Molly Brown wants to “see what there is to see” in the world, and she wants the social acceptance that comes with status.

This is how Molly Brown starts out…

Then she gets all posh and fancy.

She’s a people pleaser and thinks she can use money to get people to like her, making up for perceived shortcomings in her upbringing. I think there’s something sweetly sad about Molly Brown because she is really such a boyish character, both in looks (with short hair through most of the film), and actions (her “uncivilized” manners), and her pursuit of money feels like an attempt to feminize herself. When she and J.J. are rich, Molly wears elaborate gowns with ruffles and trains, and she decorates their house in red velvet, gilding, flowers, and other cliched feminine styles. 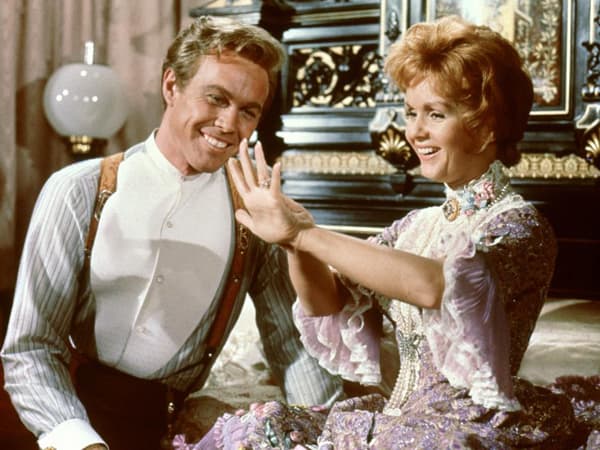 The diamonds are his idea, but the ruffles are hers. 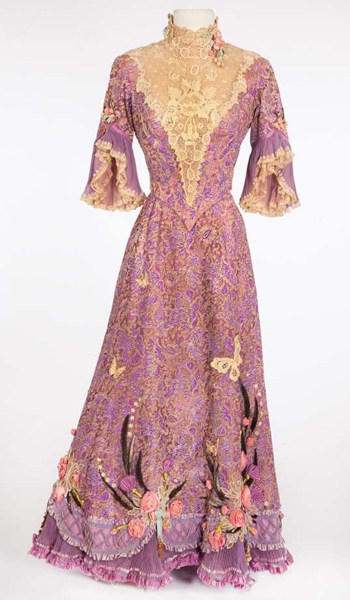 The purple gown on exhibit. 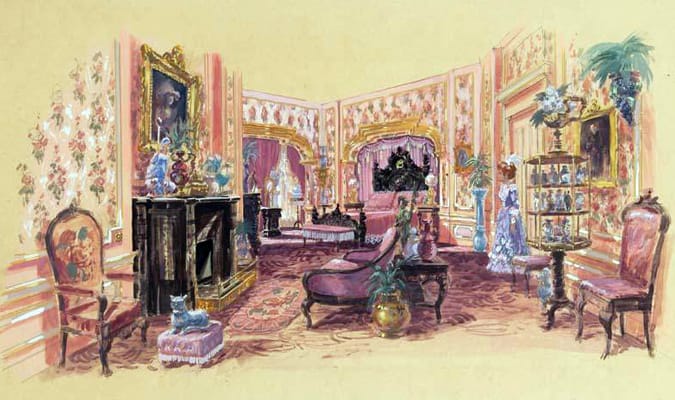 Concept art for Molly’s ultra-feminine bedroom in the Denver mansion. 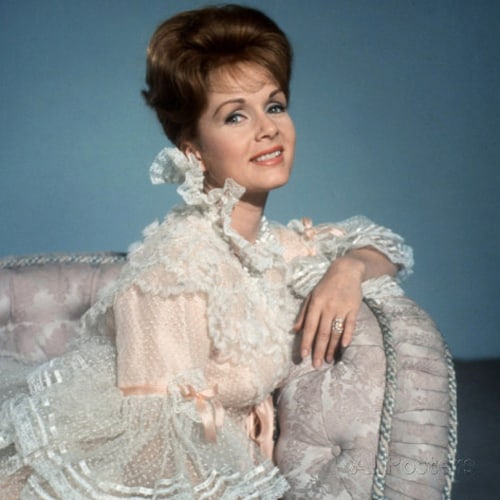 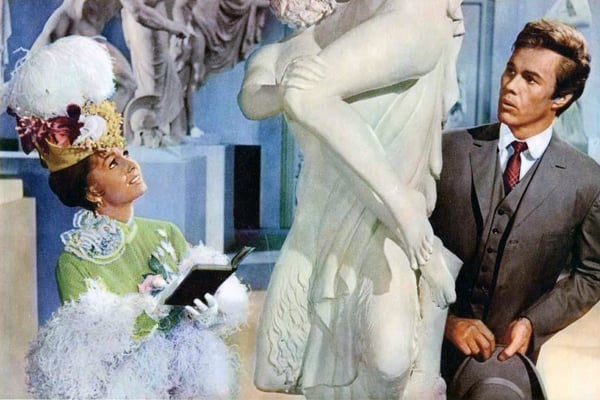 Molly (& to a lesser extent, J.J.) learns culture in Europe. 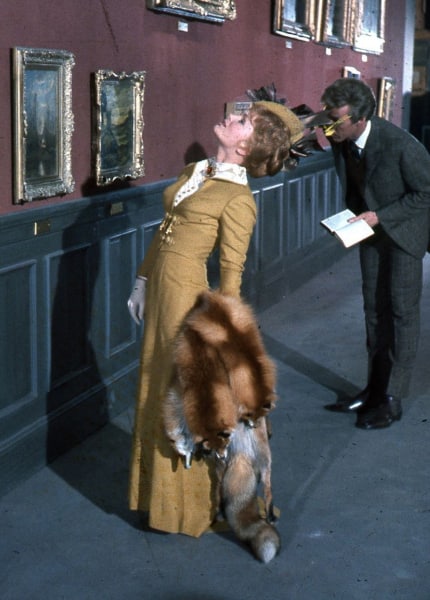 Of course, money can’t overcome Molly’s innate wildness, even after she spends time in Europe acquiring old-world habits. While the film almost seems to say that her heroism during the Titanic tragedy is enough to redeem her, it’s really the love of a good man that sets Molly’s world right in the end.

Well, despite mixed messages in the story, Debbie Reynolds gives an entertaining performance, looking amazing in period-esque gowns and dancing up a storm. Both “Belly Up to the Bar, Boys” and “He’s My Friend” are riveting song-and-dance set pieces, even more so when you hear that the latter one was filmed in just one day, to everyone’s exhaustion. 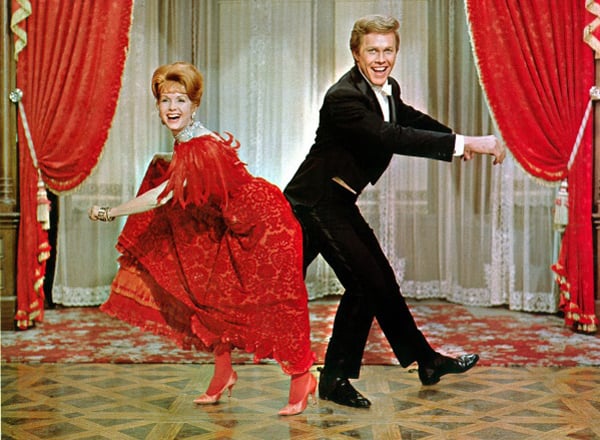 Are you a fan of the unsinkable Debbie Reynolds?